I've noticed something interesting with the algorithm that makes no sense but happens with enough keywords that it might be a legitimate bug. That's one of two bugs you want to stay away from. I'm going to show you both in this Keyword Teardown.

FYI - I'm hosting a live stream with a guest next week to talk making money with subscriptions. More info

Word games have become all the rage these days thanks to the viral success of Wordle, which spawned off tons of clones, including one that had the same name. What does all of that have to do with ASO? Well, if you search for word puzzle in the App Store, you'll notice one result that makes no sense.

I believe that's a bug in the algorithm. 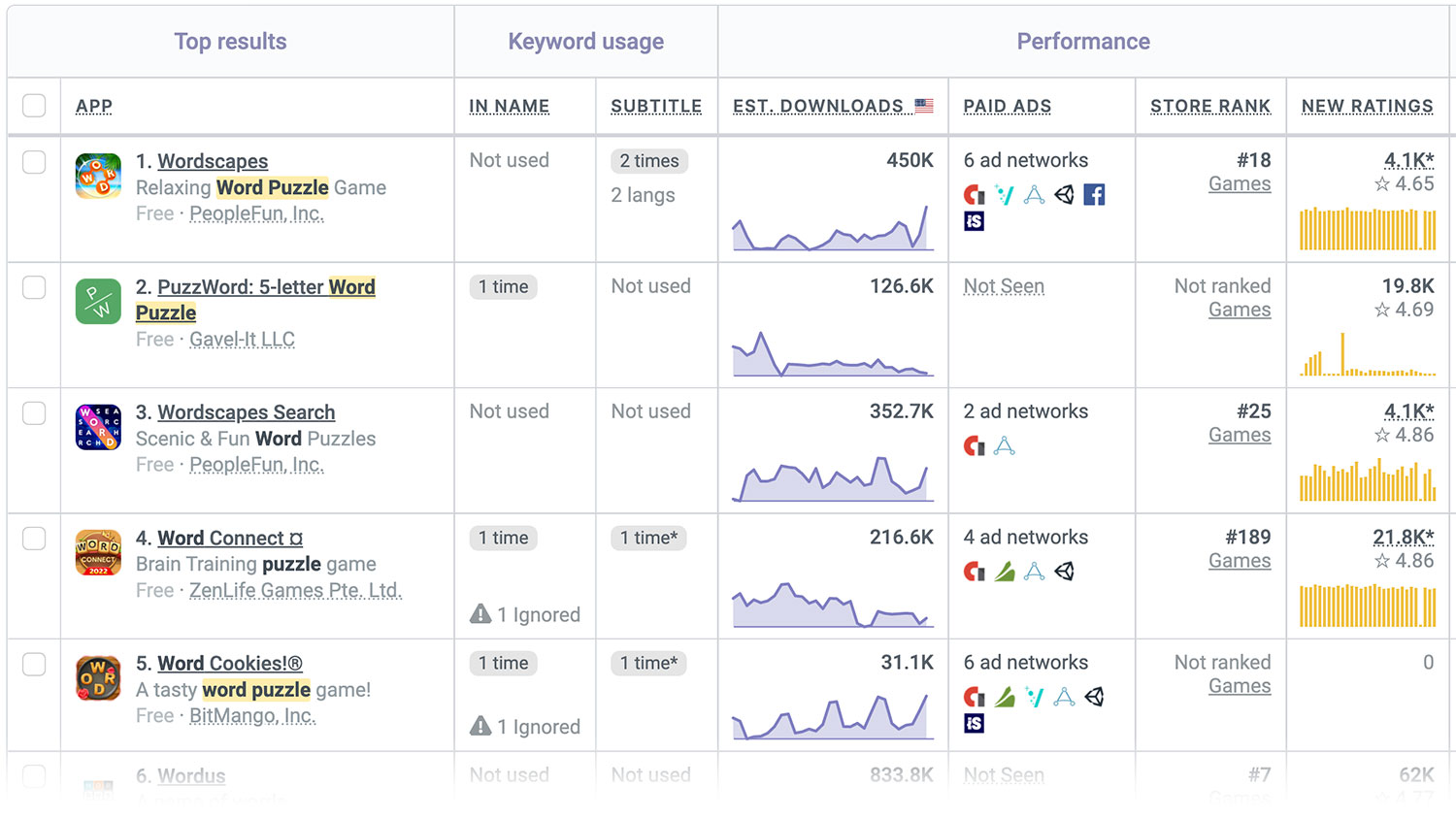 In first place we have Wordscapes, a very popular app that's ranked very well and gets quite a few downloads. Those downloads don't seem to convert into ratings very effectively, but that's harder to do with users that weren't acquired organically.

Notice how the full keyword is in the subtitle and the name is just a single word. Having the keyword in the name would be more effective, but if the goal is to "keep it clean", it's probably the best way to do it.

Moving down to #2 we have PuzzWord. It has the keyword in its app's name, doesn't have a subtitle at all, a hack I pointed out a few teardowns ago (but don't love), and has a lot of ratings. More than Wordscapes. Five times more.

So why is it not the first result?

Let me finish the analysis and I'll explain below.

Wordscapes Search, from the makers of the #1 result, follows the same template but pluralizes "puzzles". That's a-ok. The algorithm knows what to do with plurals.

In fourth we have another strange one. Word Connect has a lot of new ratings, a short name, and both portions of the keyword in its visible metadata. But look at that weird character in the name. It's another hack we looked at a few teardowns ago, but this isn't one of the characters we've seen before and one you don't see often.

More on that in a minute.

In fifth place we have Word Cookies, an app that has no new ratings. Strange, but let's examine it. A short name, the full keyword in the subtitle, and when you dig a bit deeper using the Competitors report you can see that it got about 800 new ratings in the last 30 days, but they were adjusted down by Apple a few days ago.

The thing is, as you scroll down below the top 5 you won't find (m)any other games that use the full keyword in their visible metadata.

Do you have a word game? This is an opportunity!

I've seen quite a few keywords where the app that should be the top results simply isn't, and in all of those cases, a few things were consistent:

That's a nice pattern, but there's nothing wrong here. Using up all of your Apple-given keywords is a best practice. Keyword in the name is too. That's why I think it's a bug.

I suspect the issue has to do with how the algorithm is treating characters like : and -, where it overcounts them so they "push" the name's length beyond 30. It then trims it at 30, effectively chopping off the last character.

But I can prove it.

When you search for word puzzl (no e) guess which app shows up first? There's really no reason for the algorithm to favor it over any of the other apps that use the same keyword.

Update - Here's a real example from a reader.

When I first saw it I wasn't sure that's the case, but I've now seen this happen enough times across enough keywords that I think it's better to not do this, even if only to be safe.

Apple's algorithm seems to misread certain delimiter characters, like : and -. When you use them in your app's name, and the app's name uses all characters, the last character will get "chopped off" so the algorithm won't see it as you expect it to.

If you place your most important keyword at the end of such a perfect storm, you'll be at a disadvantage.

Also, not all strange characters are great for the uniqueness hack, so if you do want to give it a try, make sure to stick to characters that work.

Optimizing For the Most Competitive Keyword in the App Store

You can rank for even the most popular keywords if you know what mistakes to avoid - here's how.

How to (NOT) Do App Store Optimization

Here's a keyword every top result messes app, and how to fix it and become the top results.