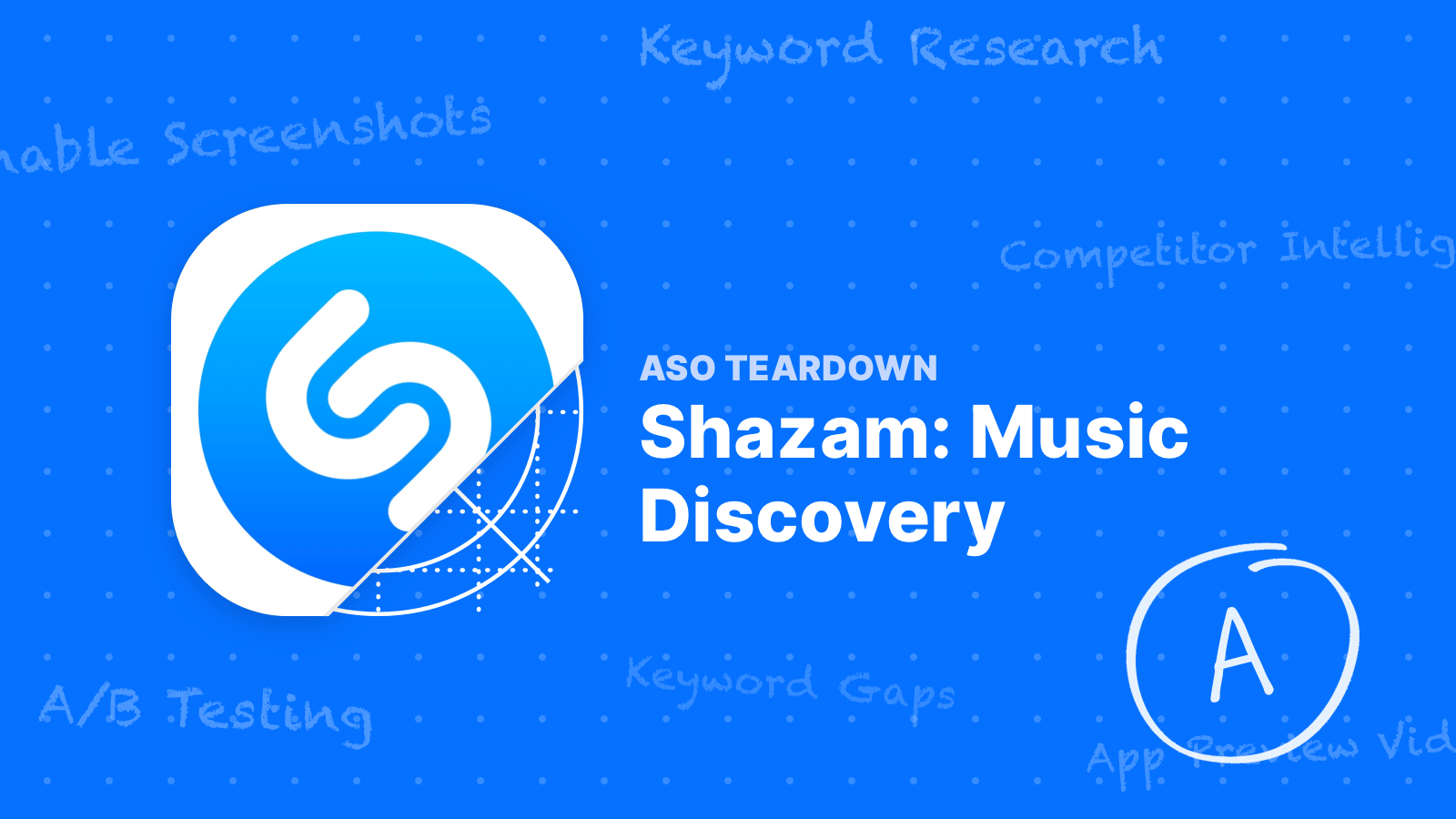 How many times have you heard a song while out and about and fell in love with it immediately? I know it happens to me all the time! And when that happens, the first thing I do is reach into my pocket to Shazam it. How big is your Shazam playlist?

That's (probably) why Apple acquired the tune finder and has been working to integrate its functionality into Siri and the Music app.

But while I know about Shazam, many still don't. That's where ASO comes in. And judging by Shazam's downloads and keyword ranks, they do quite a bit of it. Being under the Apple umbrella—even though the App Store doesn't say it—gives us a glimpse into how an insider applies ASO to own critical keywords such as "find music."

Overall, Shazam earns an A, because it's good but not great.

Shazam by the Numbers

For context, here's how Shazam is performing in the U.S. App Store, based on our Intelligence:

Shazam isn't new to the App Store. In fact, it debuted with the App Store in 2008. Yet, its downloads have been pretty consistent. Here's what the last few years looked like: 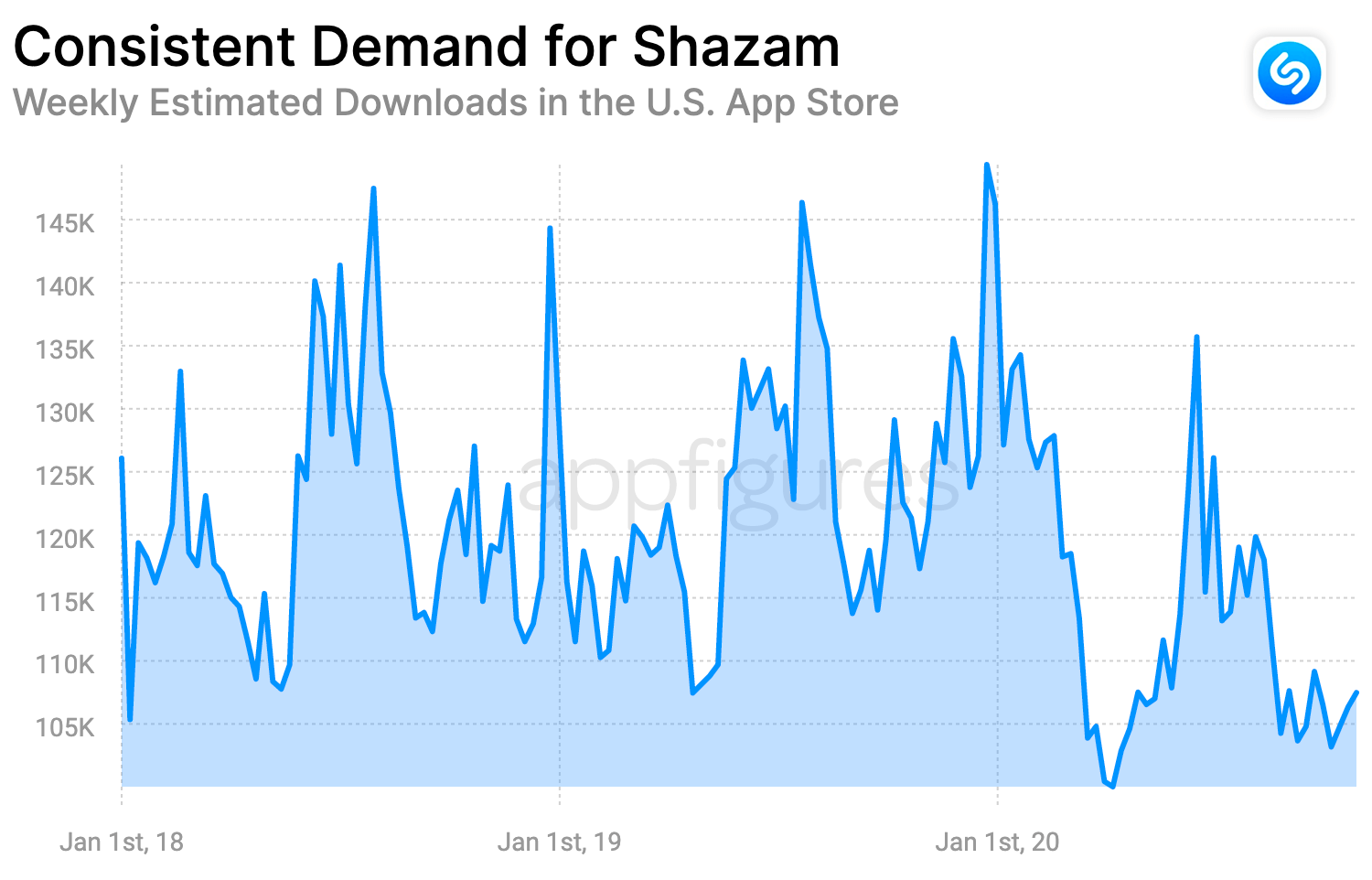 Such a sustained level of downloads means there's a perfect product-market fit for those of you thinking in those terms. It also means constant visibility and exposure to the ever-growing market of smart-phone users.

We can see a clear drop around April of this year, and overall slightly fewer downloads in 2020, which can be easily explained by the lack of social gatherings—where you'd typically be exposed to new music—due to lockdowns and social-distancing rules. Not a real trend.

Shazam's vs. Its ASO Competitors

It's easy to say Shazam is in a class of its own. Looking at the competition, that also seems to be the can in search results.

Shazam does have some competition, but download-wise it leaves them in the dust, having more than 4x the downloads of its closest competitor, SoundHound, in the U.S.

This isn't a surprise for several reasons, the most apparent being Shazam's application of App Store Optimization over time, which is how you build a rather wide footprint with the algorithm.

Another obvious win is new ratings, which look awfully low. I suspect Shazam's use of the rating request popup is pretty optimized. Our SDK Intelligence shows all competitors make use of the StoreKit API, which is required to launch that popup, but likely not as well.

Let's kick off the analysis with the keywords Shazam is using in its name and subtitle. Those send the strongest signals to the App Store's algorithm.

There are quite a few powerful combinations here. But there are also quite a few duds that just sound good but have very low popularity. 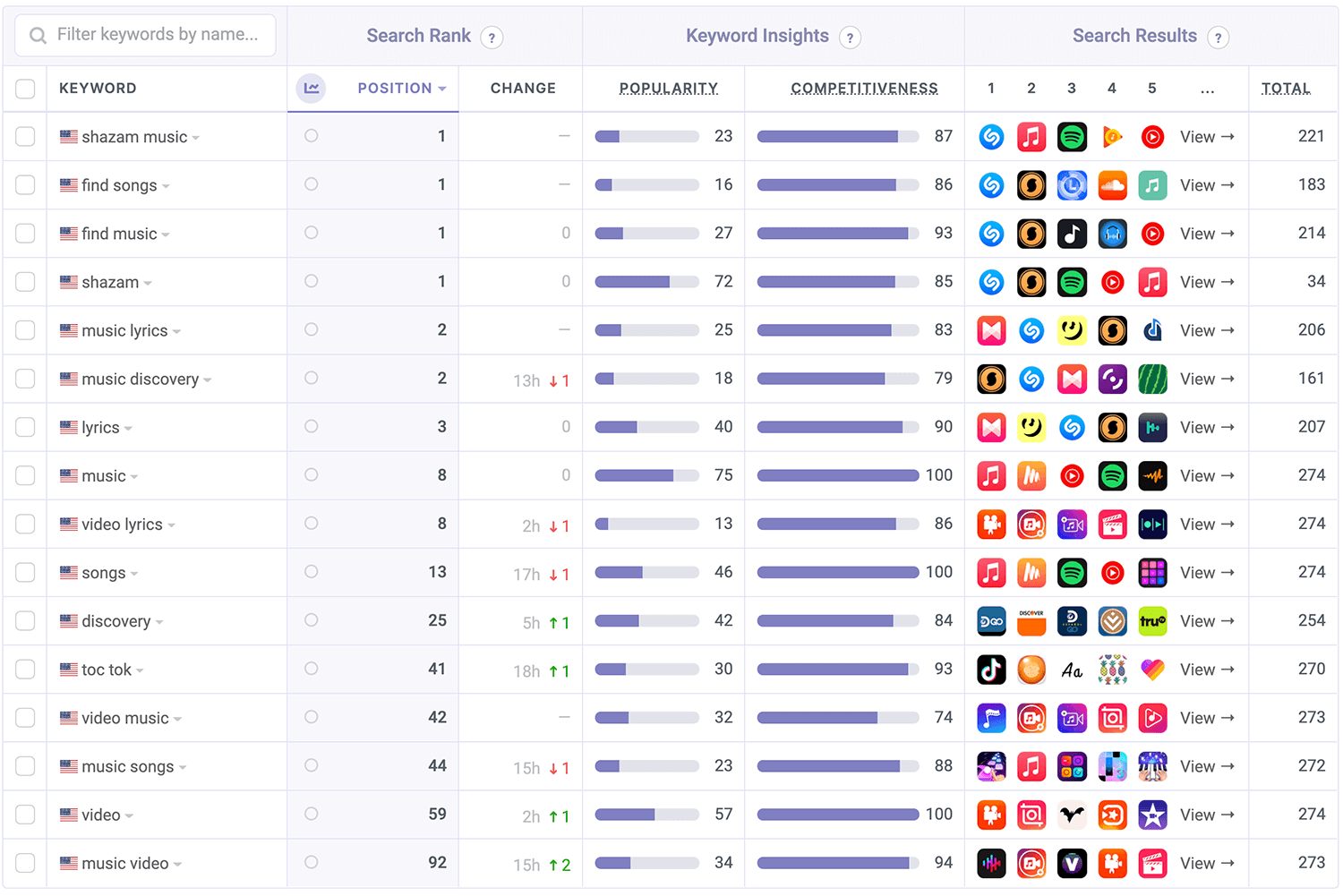 This list gets pretty decent results. Is it the "best" list, probably not, but it's good enough to give Shazam the visibility it needs to get those downloads.

Side note, some keyword stems have variants that may sound less good, but when combined with other keywords, result in more popular terms. For example, "find music" has a popularity score of 27, but "music finder" has a popularity of 36. Remember, popularity isn't a linear scale, so the difference between the two isn't just those 9 points.

When it comes to ASO, data also wins because a keyword that "sounds good" but has low (or no) popularity is not going to get you downloads. I try to remind myself that all the time...

This is a pretty diverse yet narrowly focused list. It's easy to forget that to the algorithm, "discover" and "discovery" are completely separate terms. Including such variations in the keyword list is a must, as long as terms involving those words have a decent popularity score.

Other keywords, including "track," "artist," and "pop," pair very well with the words in this list as well as the words found in the name and subtitle, giving Shazam a few more avenues for discovery.

A note on competitors: While Shazam ranks for a few competitor names, including the ones we looked at above, I don't think the keyword list is mentioning them explicitly. Instead, the algorithm has identified them as competitors and associated them. The reason I don't think they do it explicitly is that as an app owned by Apple, I imagine it'd be scrutinized a bit more harshly during app review.

I could be wrong, but, I don't think those ranks help them much, so either way I'd recommend not using competitor names in your keyword list.

Where Else is Shazam Ranking?

This combo of name, subtitle, and keyword list gives Shazam a bit more than just the name and subtitle alone. Here are some of the highlights: 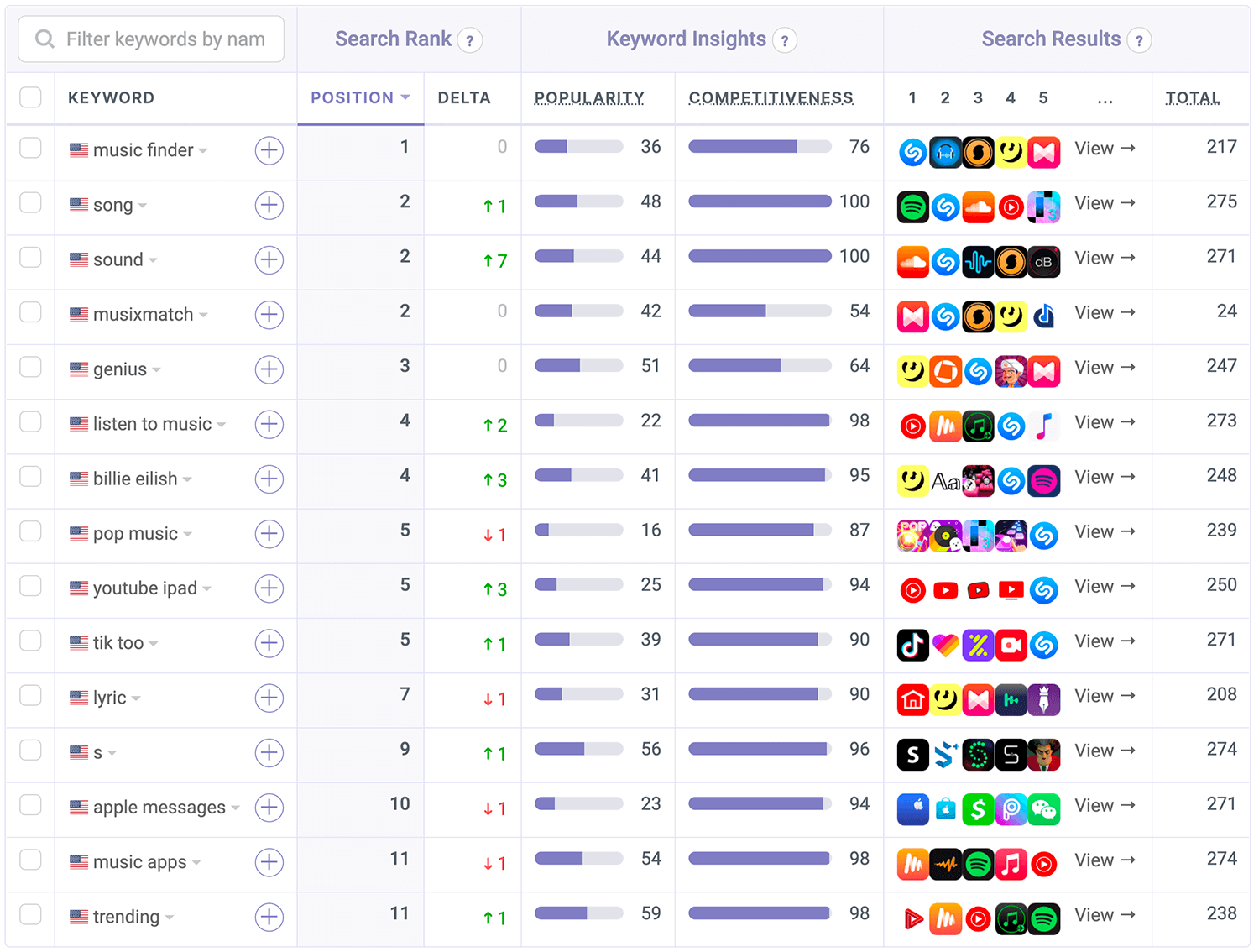 The Discover Keywords report is showing more than 330 keywords Shazam is ranking in right now, which isn't a small number. Many of those have a low popularity score, but that's a reality many apps face, and in no way is this really a problem.

There are quite a few high popularity ones in there as well, and although the app may not rank in the top 10 right now, those provide a fairly easy target for future optimization.

Right on the mark! I wonder if Apple PR had to approve these because they're great. 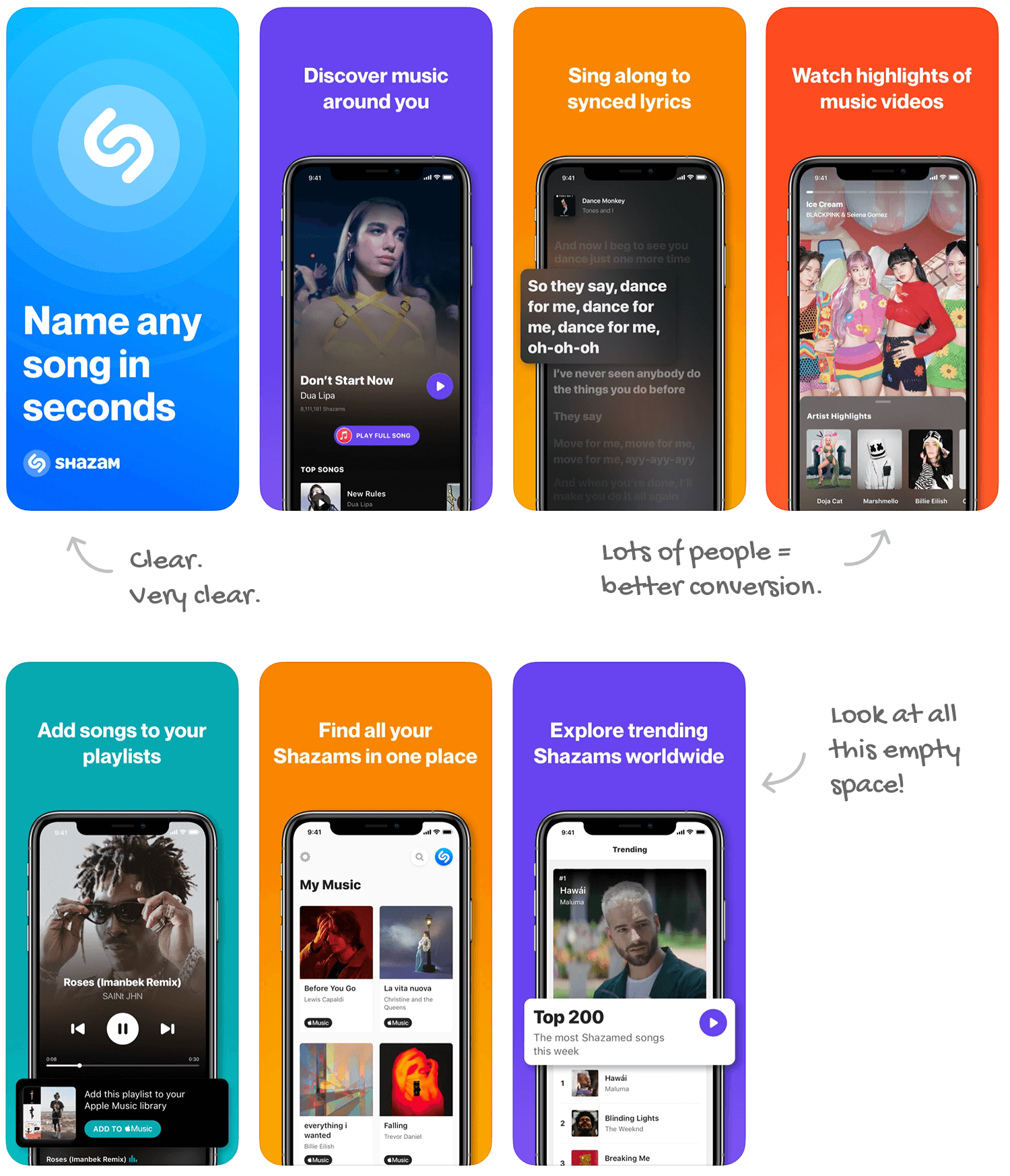 While it may come as a surprise, but even an app like Shazam needs to explain what it does first. Aaaaand, it does.

I really like a few things about these screenshots, which you may be able to guess if you read any of my other teardowns:

This is just a really great set of screenshots, and all of the points above can apply to almost every app.

Nope. No video for Shazam, but I'm not sure one would help...

Given the app is now owned by Apple, an App Preview would have to adhere to Apple's rules to the T, which likely means being a simple screen capture. That, as a video, wouldn't be all that exciting. My gut says it'd help, but not enough to merit the effort it would take.

If they could, however, create a video that shows how the app can be used, with music and people, I have a strong feeling it'd help convert because it would show exactly what the app can do.

The Verdict: It Gets Better with Age

Shazam is showing its age in the App Store, and that's a great thing. Beyond that, however, it's also showing that it's going through iterations, and that's really the key to success in ASO.

While time helps, using it for trying different things is what really helps, so regardless of how long your app has been in the store, go ahead and try a different set of keywords with your next update. Build that momentum.

I did this entire analysis with our App Store Optimization and Competitor Intelligence tools. The same ones hundreds of thousands of app makers rely on to monitor and optimize their apps.

FYI - Download and revenue figures used in this teardown are based on estimates extracted from our Competitor Intelligence tools.