This Week in Apps #28 - Widgets Are on Fire, Pinterest and Discord, Too!

How much time have you spent adding and stacking widgets on your iPhone this week? Based on our estimates, lots of people have.

iOS 14's most anticipated feature, widgets, is now live and in the hands of the masses. This resulted in a slew of new widget-first apps launching (40+ in the last week according to Explorer) and more than 400 available in the App Store right now.

Three of these brand new widget-first apps have become instant winners. Widgetsmith, Color Widgets, and Photo Widgets, have climbed to the top of the App Store, and together saw more than 7 million downloads in under a week according to our app intelligence. That's right. Millions. For widgets.

Note to developers - widgets are shaping up to be a great selling point. If your app offers widgets make sure you mention that in your app's name or subtitle.

Last one about widgets, I promise. A game-in-a-widget made its way into the top charts this week, unsurprisingly, but it's not actually the kind of widget all the fuss is about.

Steve - The Jumping Dinosaur! is a simple tapping game in the old type of widget, the one that goes into the Today screen. Still, with this week's widget craze, having “widget” in your app's name is all you need, and Steve has it.

Downloads exploded, peaking at 255K estimated downloads on Sunday. Prior to iOS14, the game/widget averaged about 3K downloads a day. Impressive for a widget, but... that's an 85x increase in download overnight. For a widget.

Downloads on Android, which are considerably higher, have remained pretty flat.

Pinterest set a record high for single-day downloads on the App Store this week, netting more than 297K downloads globally based on our estimates. 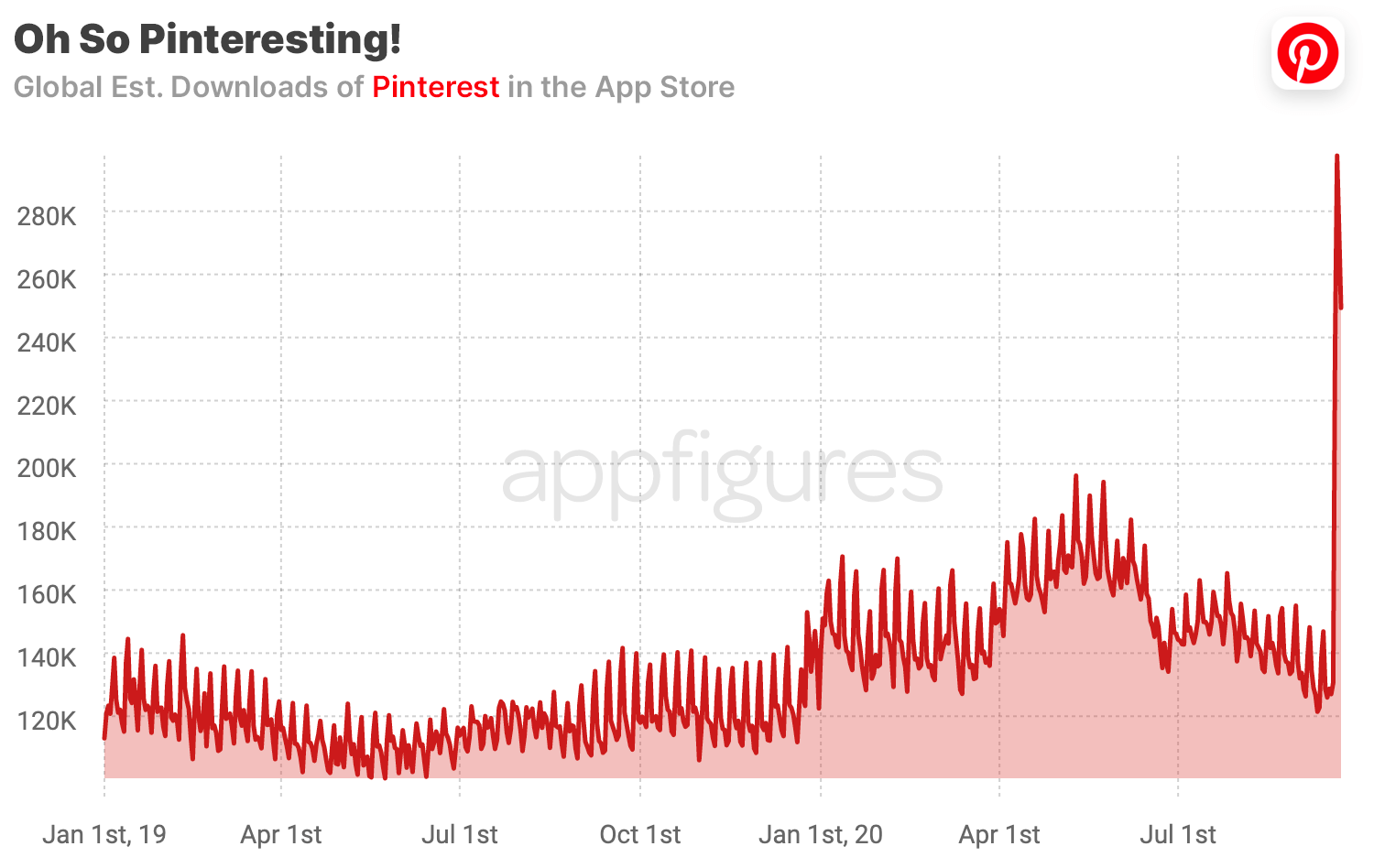 Countless tutorials have made their way into YouTube and social media showing how to “redesign” the look of your iPhone using custom icons (thanks to Shortcuts). All rely on Pinterest for creatives.

This massive jump comes at a great time for Pinterest, which followed rival social media networks and added stories earlier this week.

Discord, a chat app favors by gamers, is having a fantastic 2020. Downloads skyrocketed during the lockdown by a factor of 3, and last week broke Discord's record for weekly downloads. 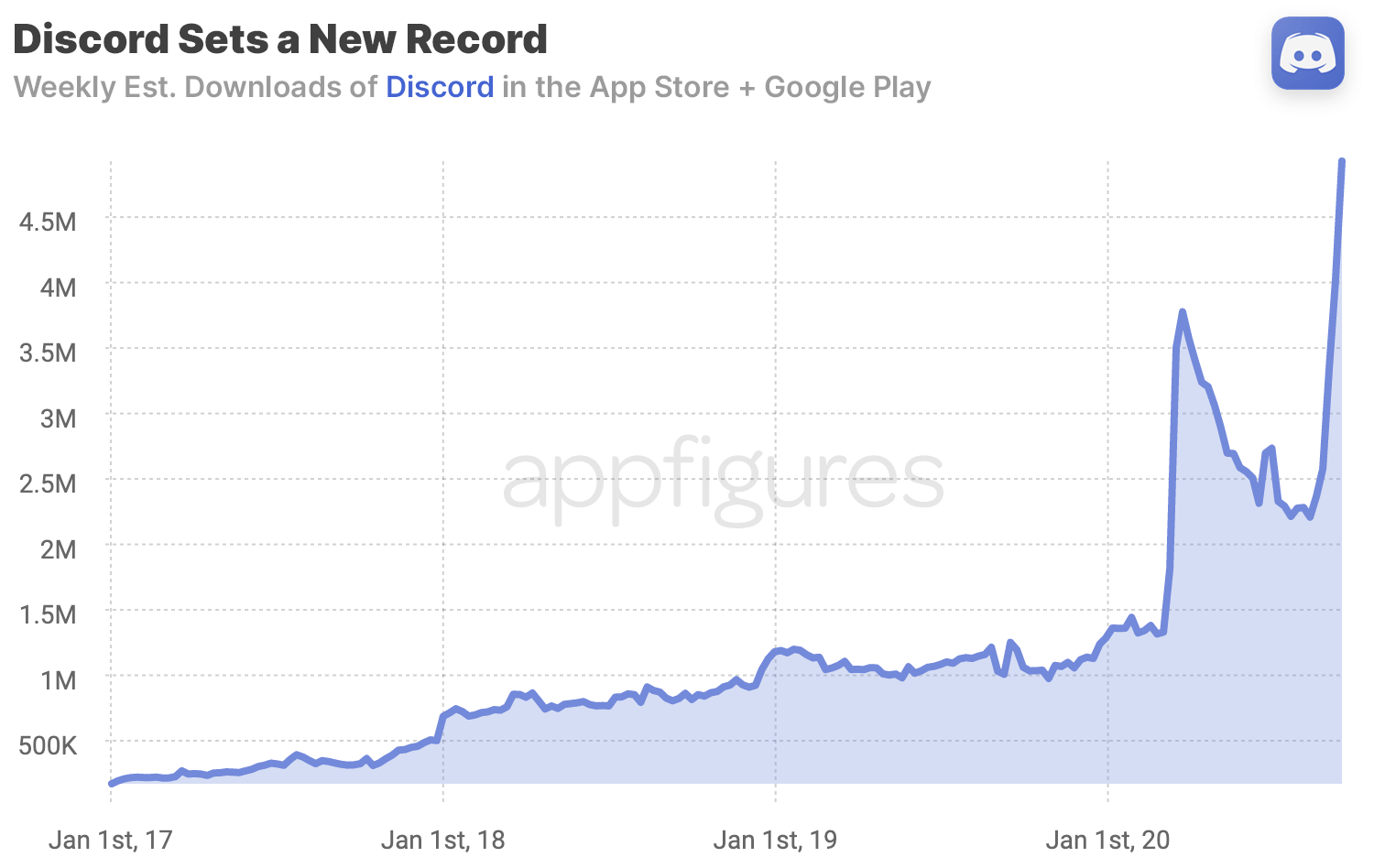 Discord was downloaded a whopping 4.9M downloads last week across the App Store and Google Play according to our app intelligence, which is 3.8x more then January of this year and nearly 8x more than January of 2018.

There's a warm place in this newsletter for streaming services, and that's because right now, it's still a pretty hot niche to be in—especially the non-traditional area.

Last week it was Quibi (which is now trying to sell itself), and this week it's Peacock, NBC's free (with ads) service. 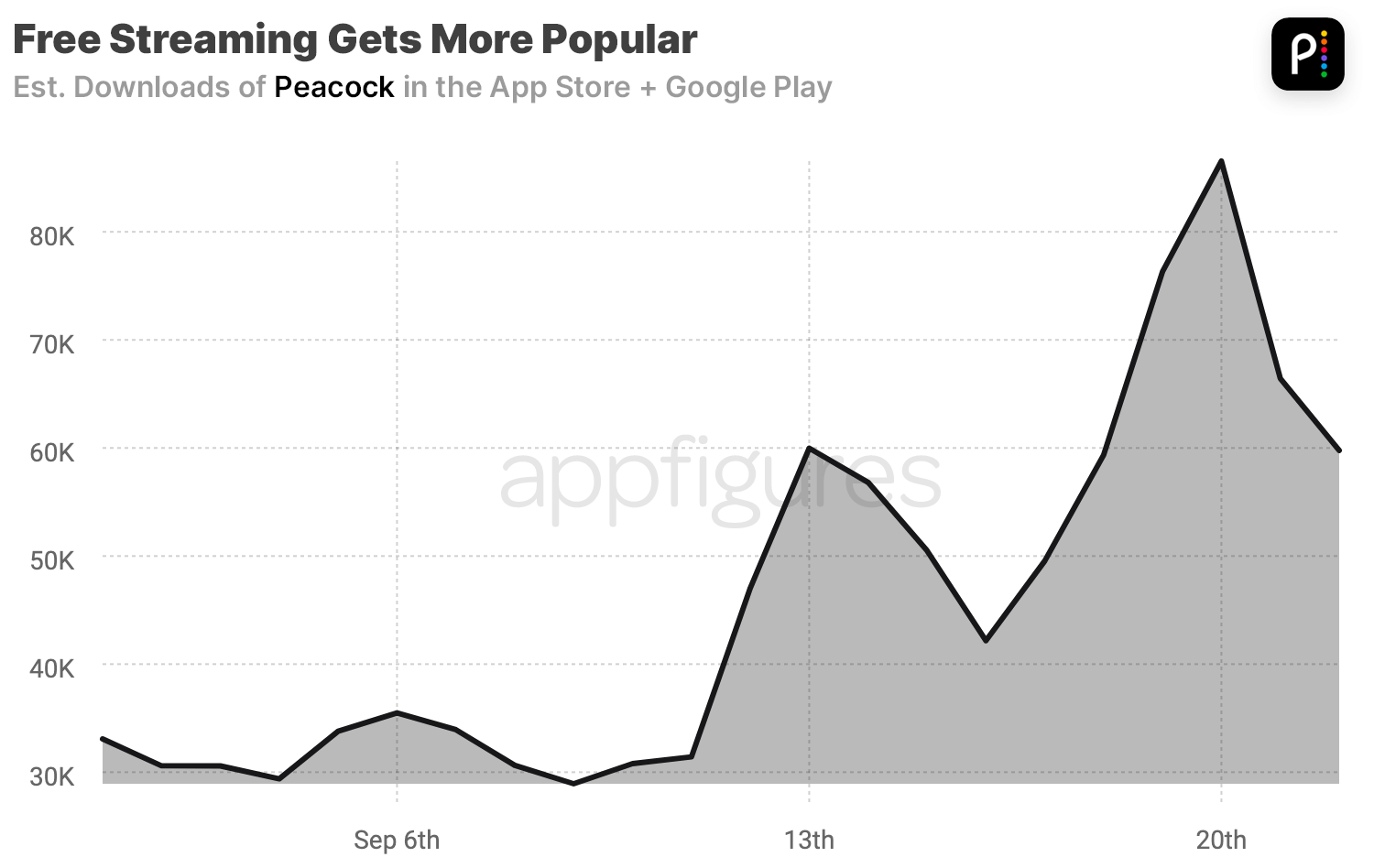 Downloads on the App Store and Google Play shot up to the highest single-day downloads since launch week, with more than 86K estimated downloads on Sunday. That's nearly triple the downloads Peacock saw earlier in the month.