📈 It's been a while since the MDI was green in the U.S., but growth in the travel, shopping, and social categories across the App Store and Google Play have pushed it up this week.

Parler, the self-proclaimed free-speech alternative to Twitter, is all the rage these days, claiming the #1 spot in the top charts for most of this week.

Earlier in the week, I looked at its uprise and how it beat mainstream news outlets and rival Twitter. The gist - there were a looooooot of downloads.

Getting closer to the end of the week, Parler is continuing to see an incredible number of new downloads, which according to our conservative estimates (pun not intended), are getting close to 2 million since election week. 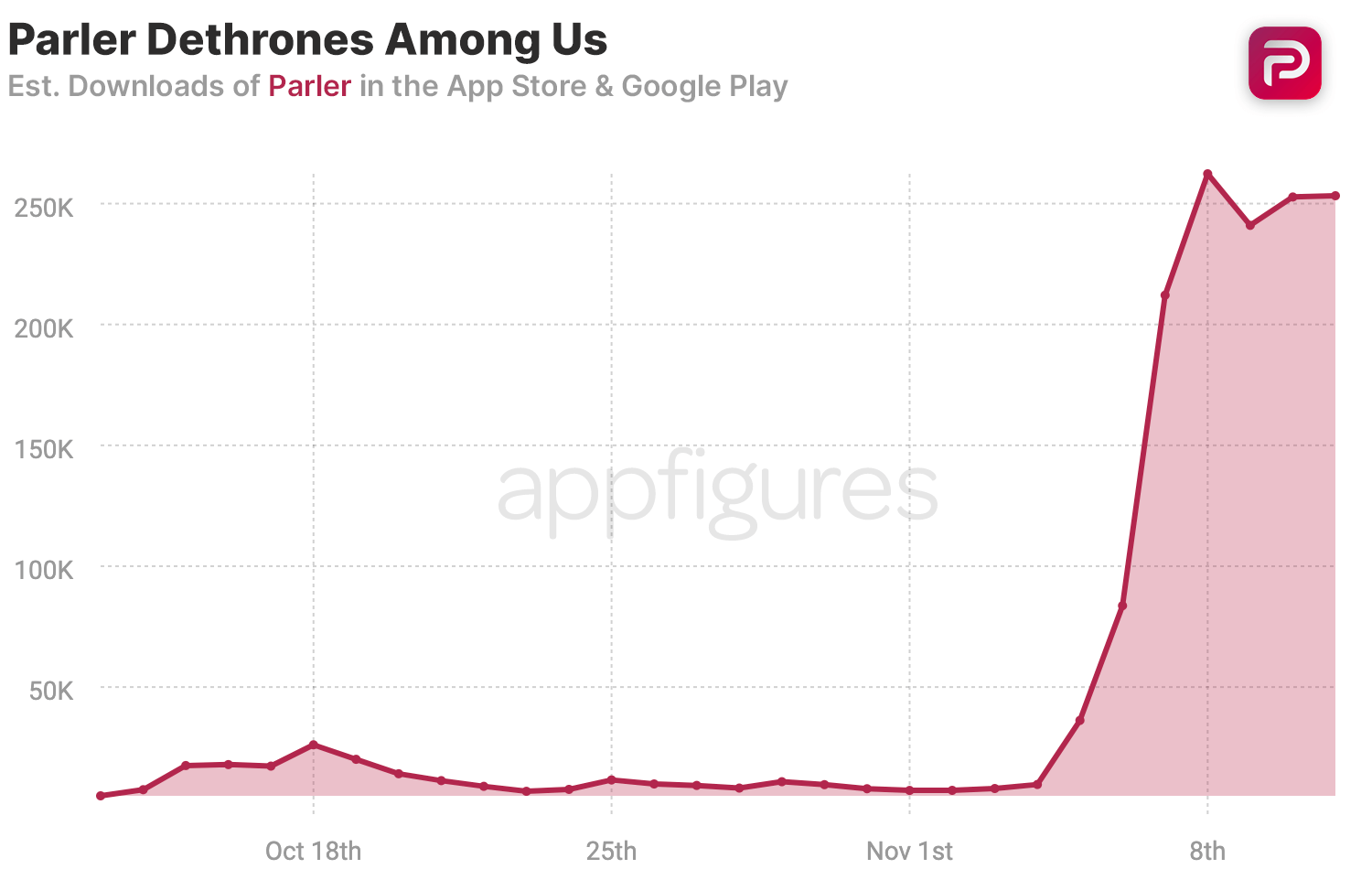 That’s the name of a Parler competitor that’s become a destination for political news sharing in the last week.

Just like Parler, downloads of MeWe exploded earlier this week, going from a modest daily average of about 2,000 downloads to over 130K estimated downloads on Monday, when it also claimed the #2 spot on the App Store in the US for a hot minute. 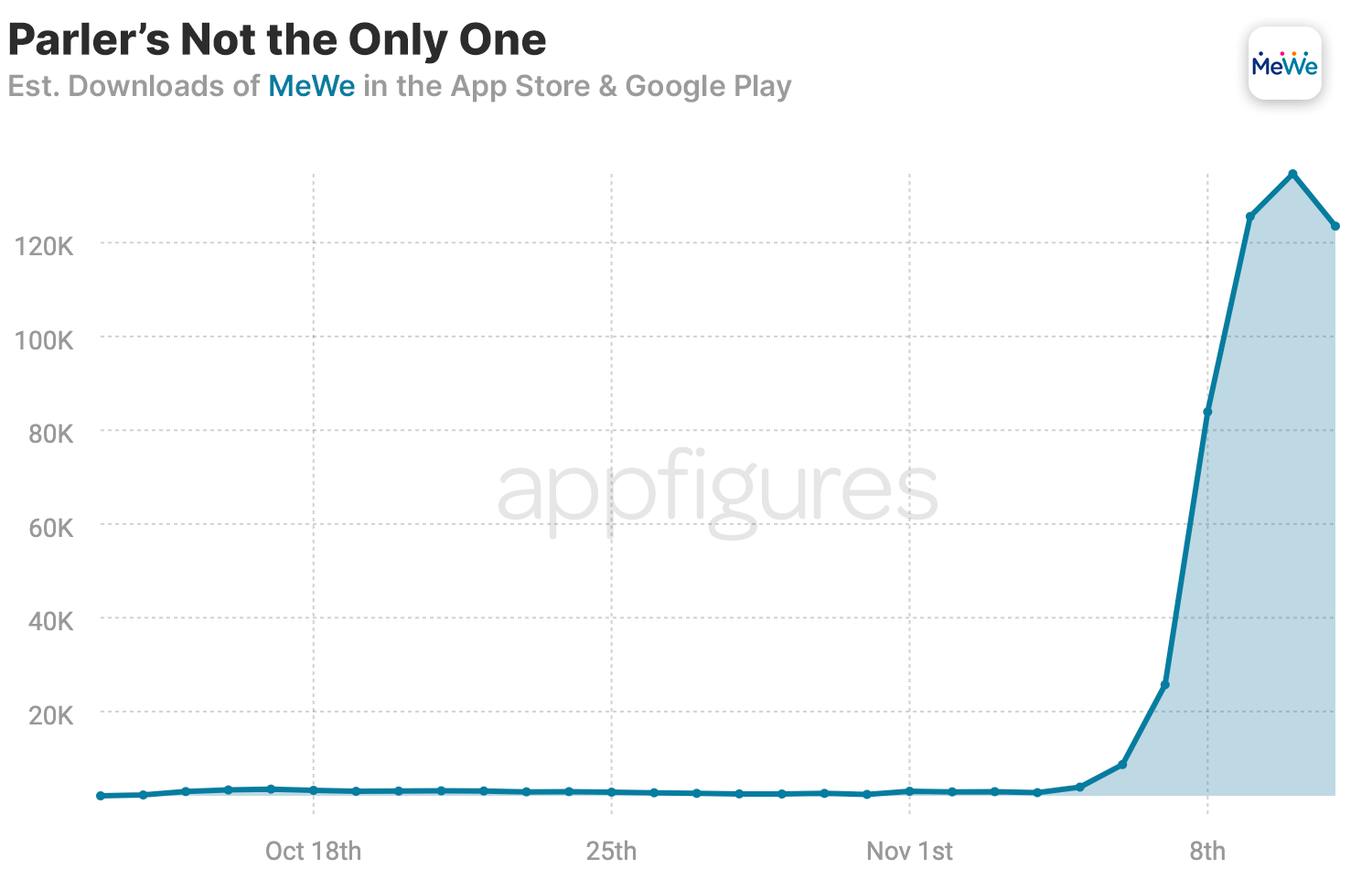 When you think right-wing news, you think Fox, right? That was two weeks ago. Since Fox’s (un)official breakup with Trump over, conservative news outlet Newsmax has been gaining downloads and a place in the top charts in the U.S.

Downloads of Newsmax grew exponentially since election day topping out at 138K on Tuesday, and earning a total of 790K new downloads across iOS and Android devices based on our estimates. 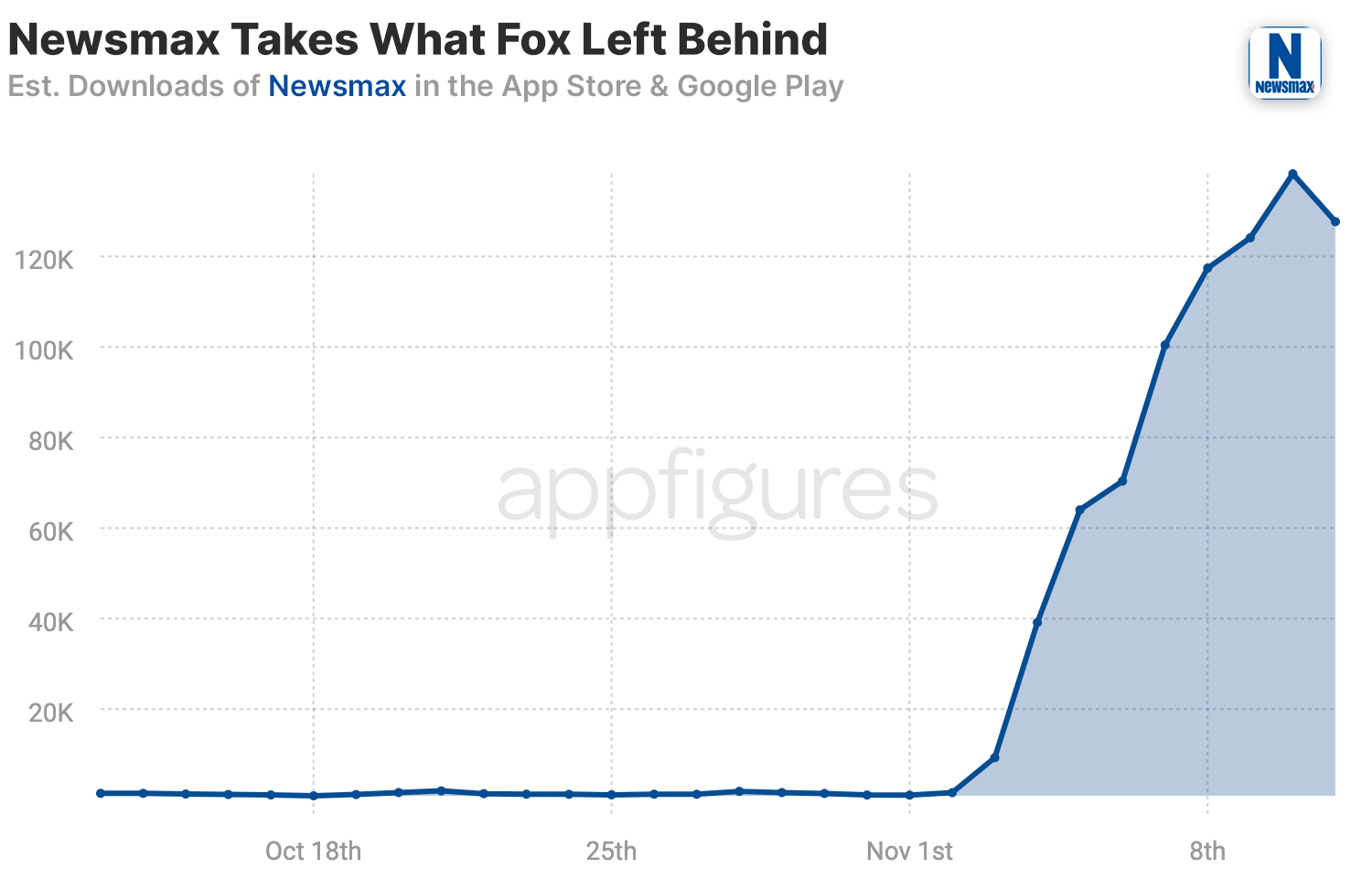 11.8K - that’s how many downloads the app saw in the nine-day period before the elections. What a swing.

Pandemic shopping + a coming holiday season launched several popular shopping destinations to the top of the charts in the U.S. this week.

Traditionally this happens a bit closer to Black Friday (11/27 this year), but this year, early offers from Walmart, Target, and Best Buy caused downloads to spike, pushing Walmart to the #1 position in the U.S.

Based on our estimates, Walmart’s downloads topped 122K on Wednesday, almost double what they had a month ago. Target shot up to 73K on the same day, more than doubling, and Best Buy saw more than 43K new downloads across the App Store and Google Play, more than four times of a typical day. 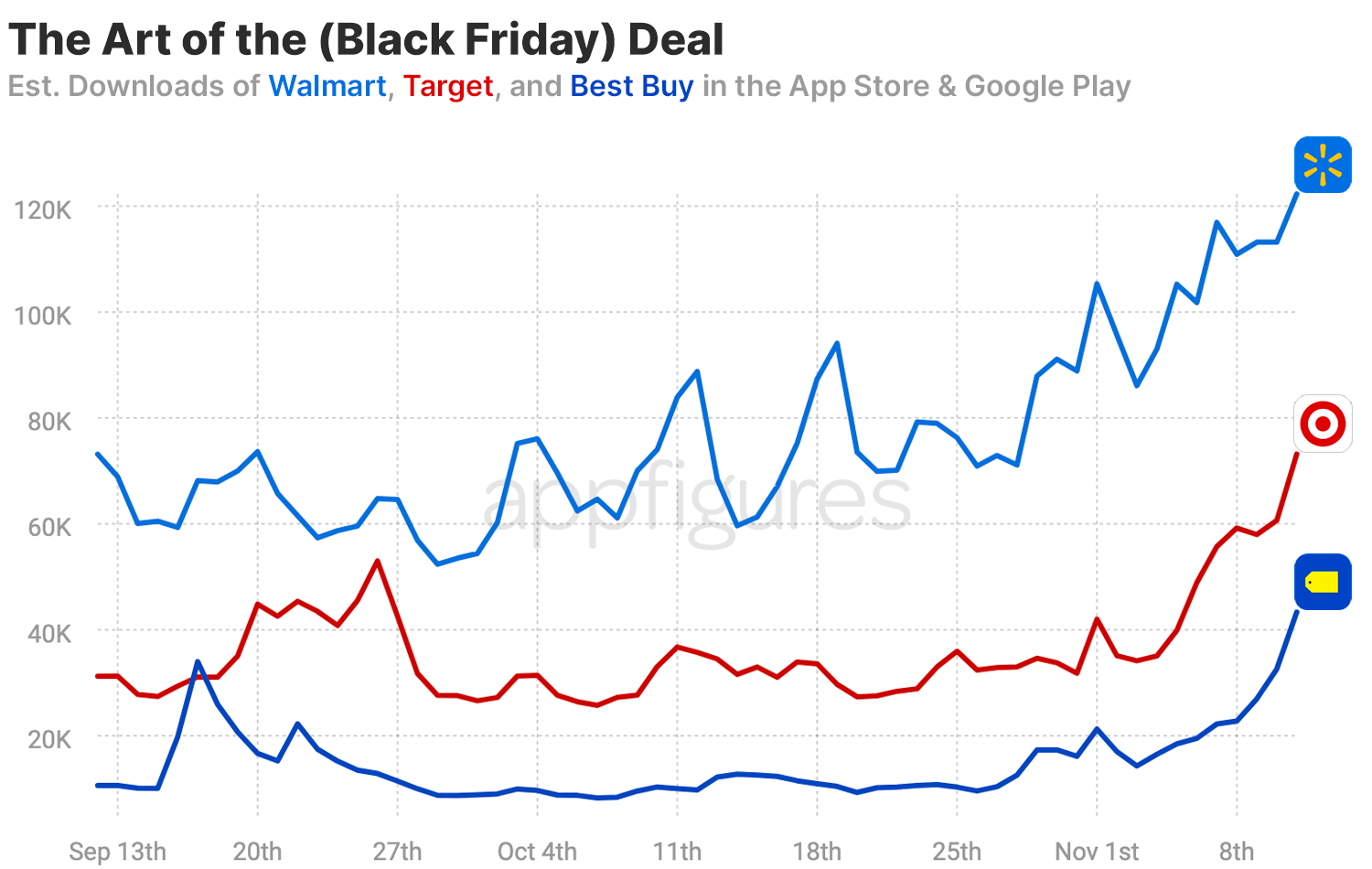 Keep an eye out for our Black Friday deal.

5. While no one was looking

They all actually were—At TikTok, which set a new single-day revenue record in the U.S. this week, just a week after setting its last single-day record. 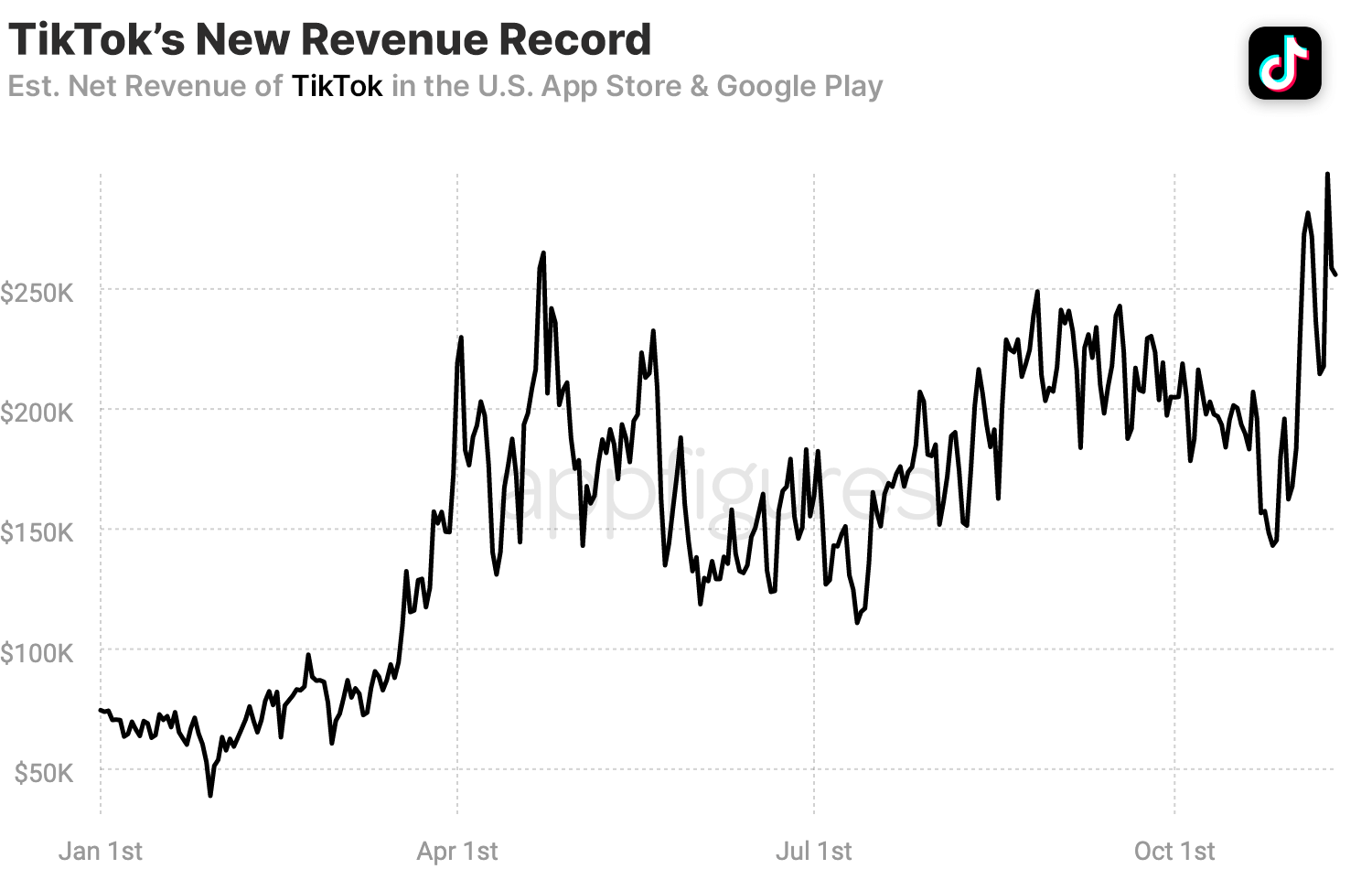 Affordable Competitor Intelligence for All