This Week in Apps #55 - Monsters, Podcasts, and More

March marked a year of lockdown for many of us, and if you remember, the first This Week in Apps opened with none other than Zoom, which exploded in popularity very fast at that time.

A year in, let's take a look at that explosion. 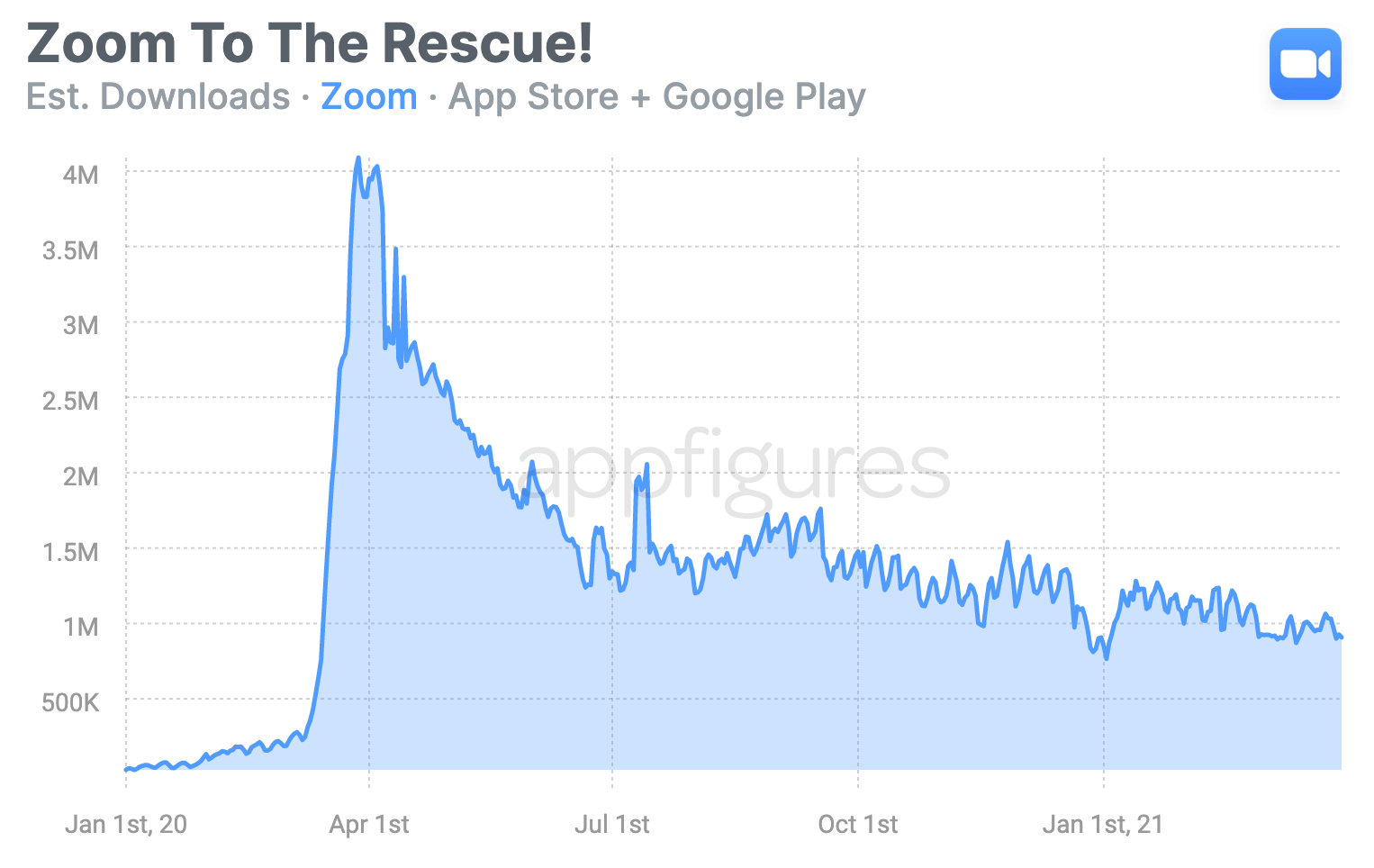 Early into the pandemic, Zoom's downloads hit unprecedented peaks with millions of downloads every day. In fact, our app intelligence shows that Zoom's downloads haven't dipped below a million until Christmas and jumped back up with the new year.

Why Zoom and not any of the other more well-known like Google Meet or one of the other business versions? I attribute its success to the simplicity of being able to join a meeting without needing to log in.

That's how Zoom was able to capture not just business users, who prefer simplicity, but also the non-business crowd who need simplicity. Pre-covid, Zoom was already considered to be on its way to glory because of this approach, but covid proved that it was more than just a "nice to have", and I'm sure its competitors realize it now.

Close competitors Google Chats, on the less businessy side, and Microsoft Teams, on the more businessy side had 345M and 210M estimated downloads, respectively. Those are amazing numbers in comparison to 2019, but not nearly as good as Zoom's.

The bottom line: With vaccinations, the world is heading towards a real post-pandemic era, where works and social activities can leave the virtual world, but that may be true for many, for others, communication has been altered forever. That means the opportunities for innovation in this area are only beginning. I hope they'll learn from Zoom.

2. HBO Max catches up to Disney+

It happened! HBO Max has caught up to streaming poster-child Disney+. Hit after hit, HBO's rebranded streaming service has managed to acquire more subscribers and keep them hooked (aka. paying). 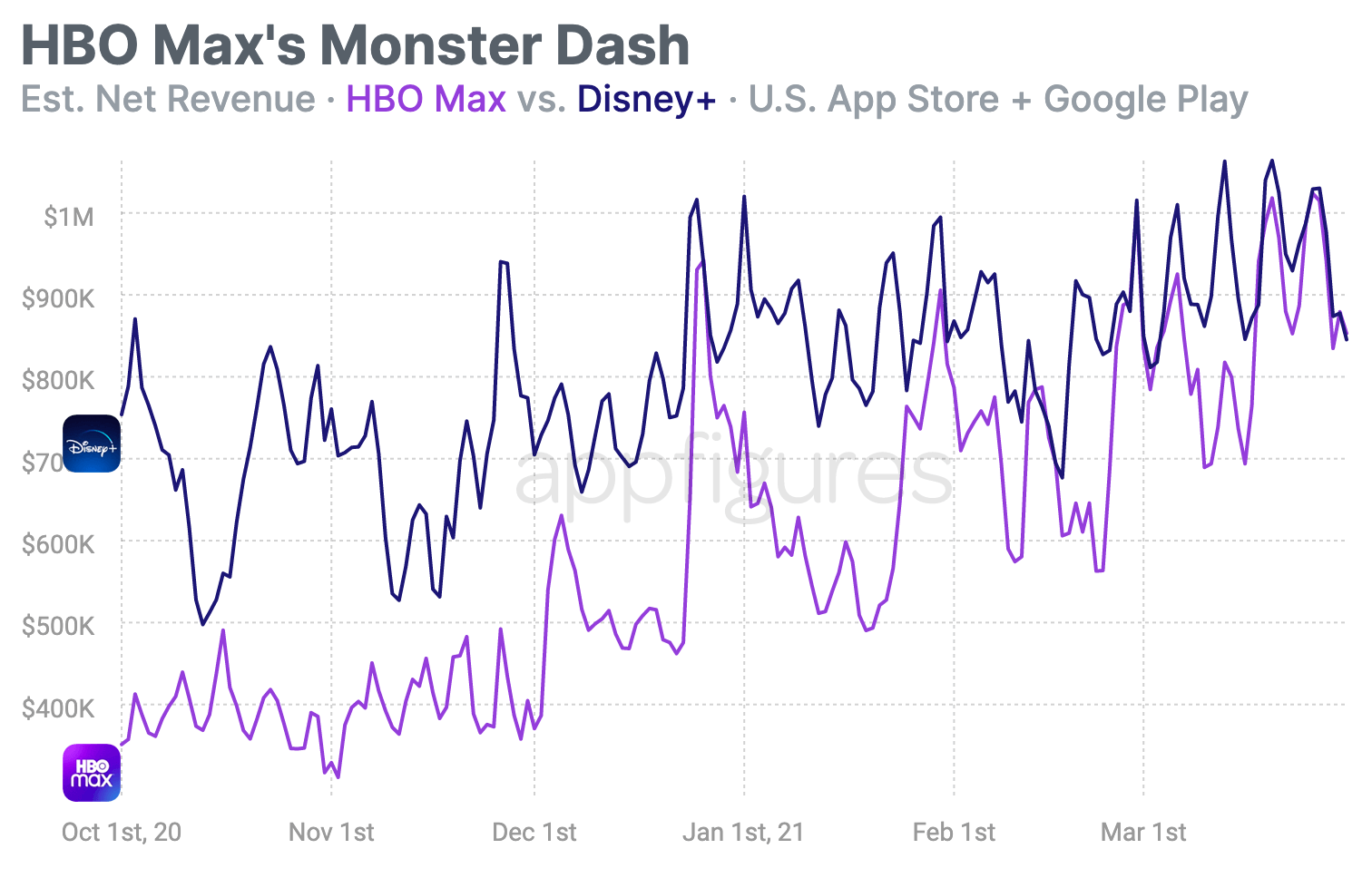 Since Wonder Woman, which was HBO's biggest hit of 2020, the streaming service has been growing in popularity thanks to exclusives like Godzilla vs. Kong, the Snyder cut of League of Justice, Tom & Jerry, and others.

In the last two weeks, HBO Max's revenue has been very close to Disney+'s, averaging roughly $2M in net revenue every weekend according to our estimates. Just a few months ago, while Disney+ had fairly similar numbers, HBO Max was at a half.

Why does this matter? HBO Max's success means that releasing movies to theaters and streaming services, which is pretty unprecedented, might turn into the reality for studios, even in a post-covid world. That could mean a big blow to movie theaters, which were already hurting before the pandemic shut them down.

3. How are you listening?

Podcasts are regaining momentum after Spotify had a Netflix moment. It's a bit more complicated than that, but not by much. But other than Spotify, which is also a podcast service, which apps are people using to listen in?

I looked at the podcast apps you can download in the U.S. App Store, which our estimates show had more than 3,000,000 downloads since the beginning of 2020: 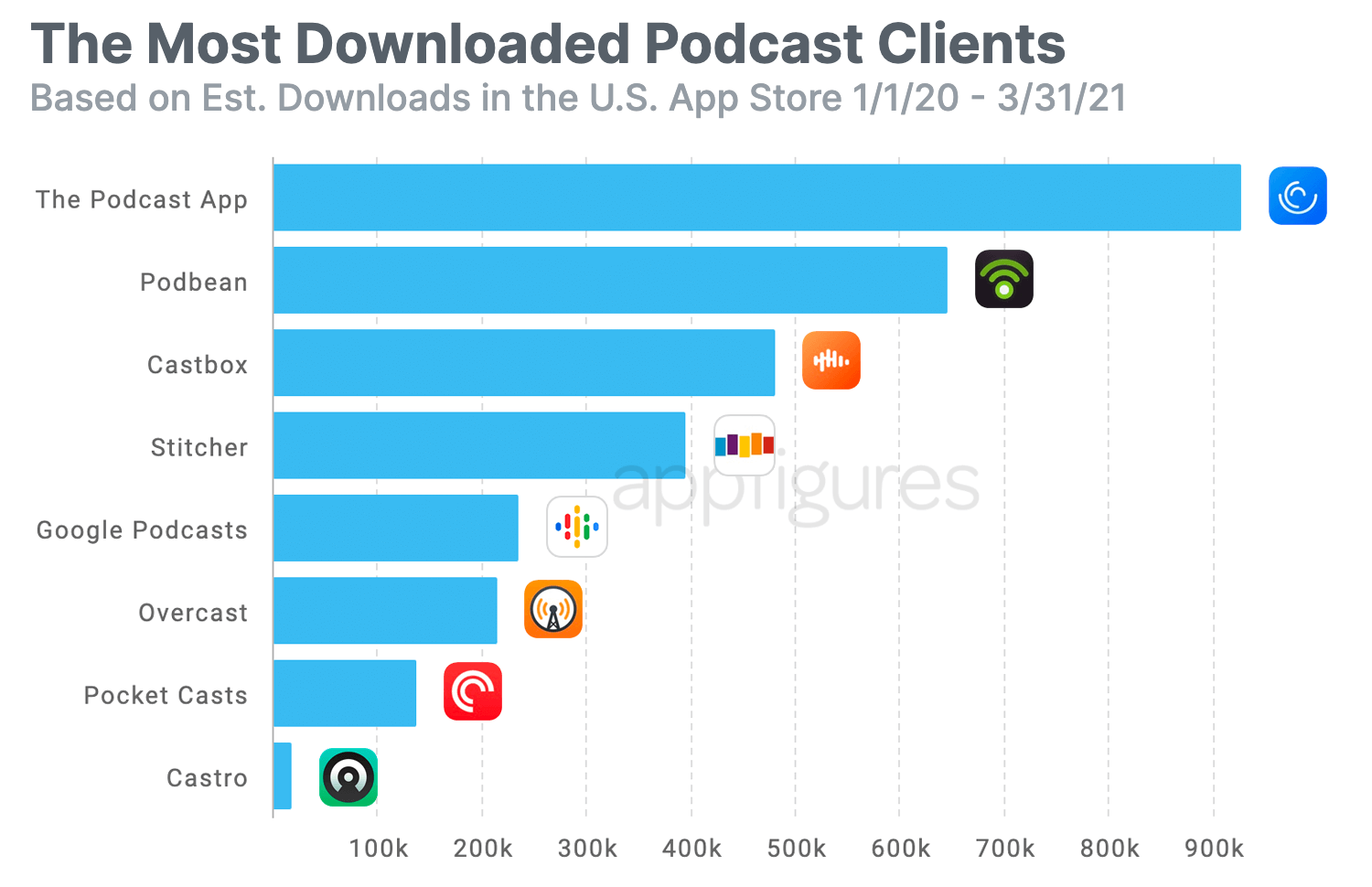 Things to note: This list doesn't include Apple Podcasts because that comes built-into iPhones. It also doesn't include Android because some of these apps don't have an Android version, and the rest aren't very popular on Google Play. It's also focused on the U.S., which is the biggest/only market for these apps.

Of the roughly 3,000,000 combined downloads we estimate these apps received, top dog the Podcast App earned about a third, or 930K downloads. Podbean, which also offers a podcast hosting service (we use it for ours), took second place with 645K downloads, and Castbox came in third, with 481K downloads.

Google Podcasts, which I expected to be more popular largely for its name, came in 5th with 235K downloads, just above my personal favorite, Overcast.

The gist: As podcasts continue to grow in popularity and as celebrities continue to create audio-focused content, the market for podcast clients is sure to grow. Spotify's bet is on content, so how people listen is less important, which means this list will probably change a year from now as the market consolidates.

Which is your personal favorite?

👉 Did you know there's a This Week in Apps podcast?

News emerged this week that the Japanese government has banned its employees from using LINE, the Japan-based messaging app, after it discovered that four Line employees had access to sensitive information of the app's users. 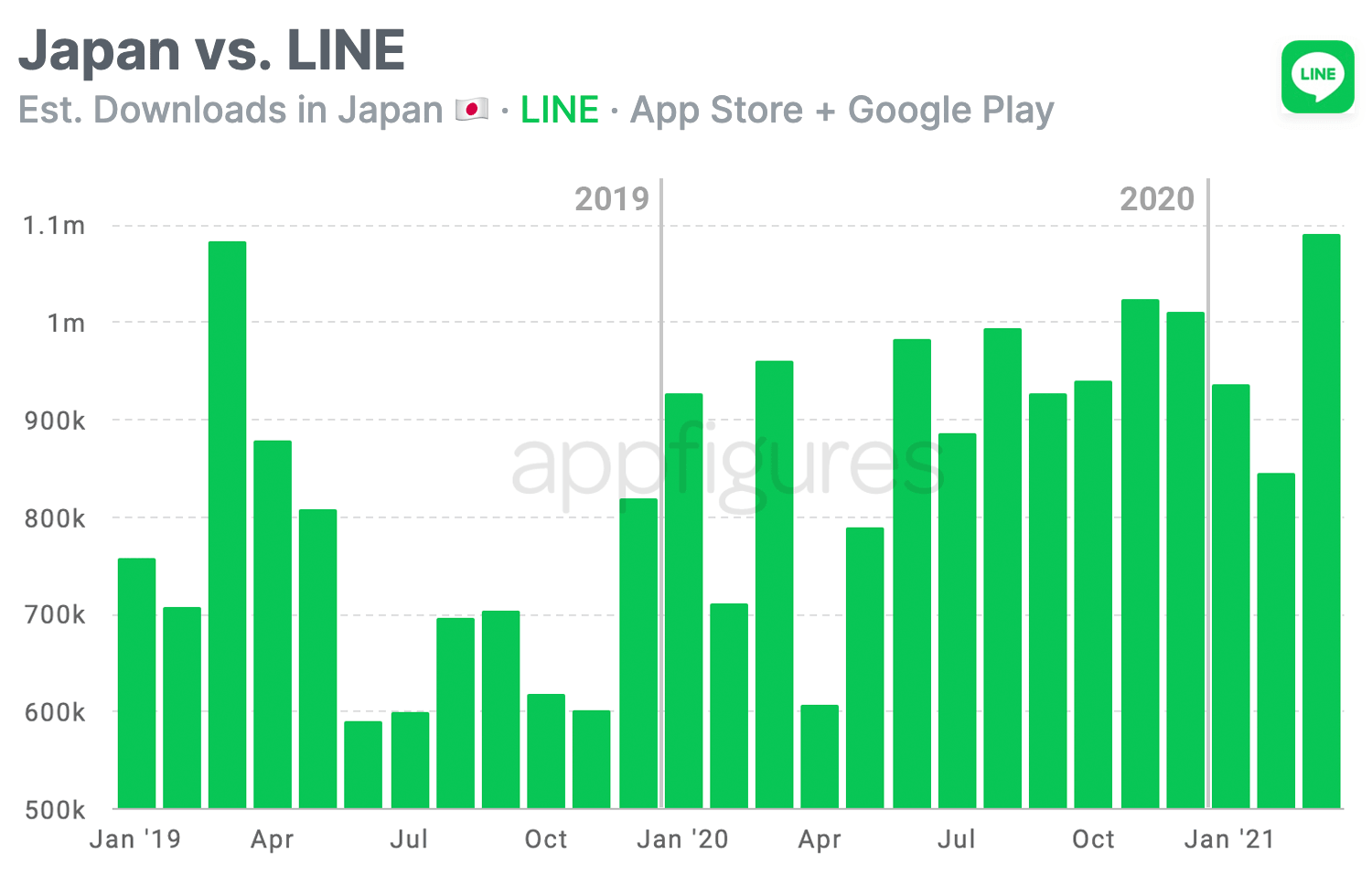 If we look at downloads, we can see Line has been growing steadily in Japan over the last few years.

We estimate that in 2019, Line had 9M downloads in Japan. In 2020 that increased to 11M, and in 2021 the app has already been downloaded 3M times with strong growth on the App Store.

This incident is going to be a challenge for the messaging app that's currently the most downloaded messaging app in Japan, and likely invite other apps that aren't focusing on Japan to try.

A bigger thought that I think we'll see more about in the future is the reliance of governments on free commercial solutions that are available to everyone else. They're convenient, that's for sure. Between being free, which means less headache for getting started, and being available outside of "work", meaning less training is needed, they offer little in the way of protection. 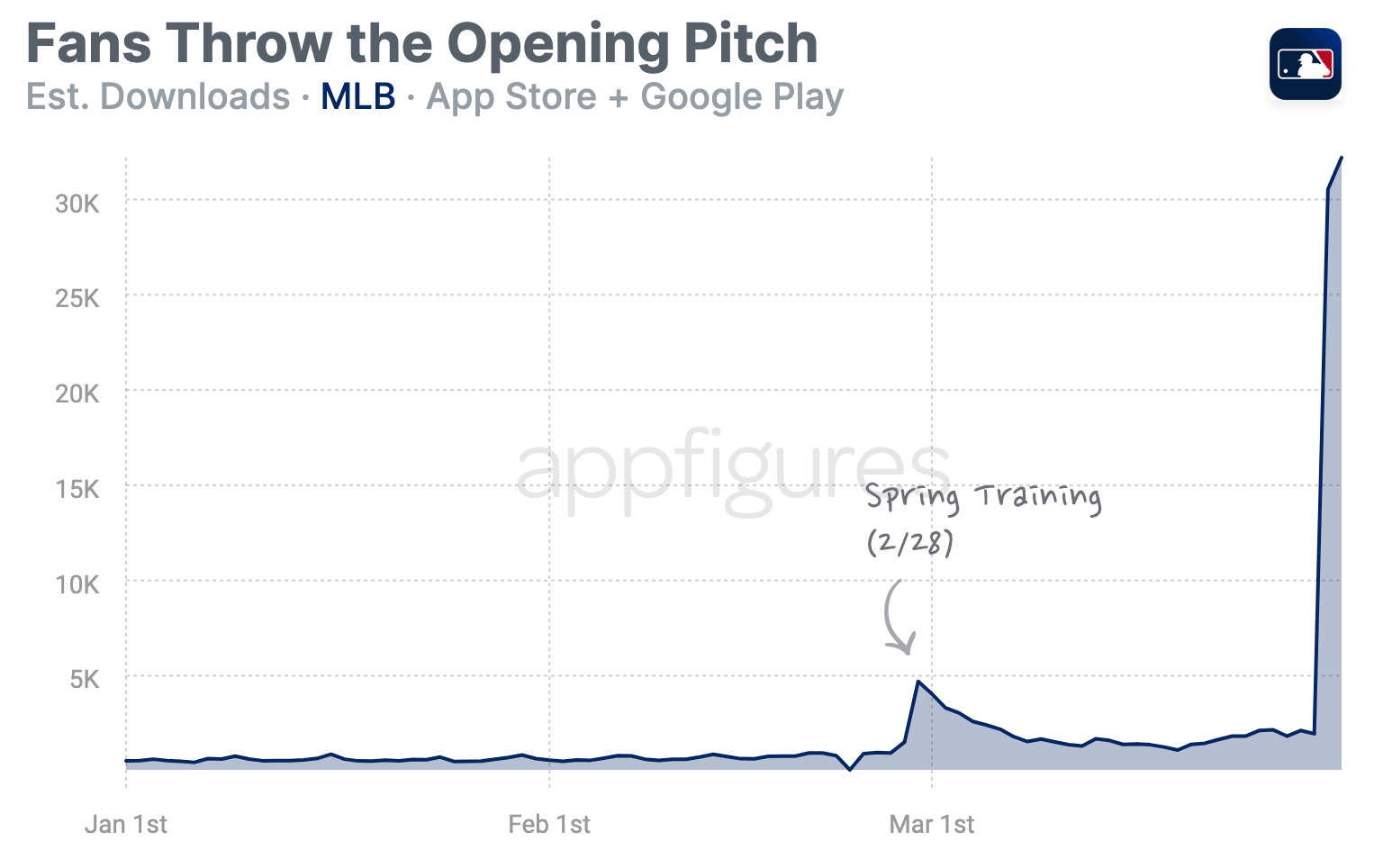 On Wednesday, downloads of the MLB app jumped to 32K, a 6x increase from those it saw when Spring Training started a month ago and a 60x increase over the average day prior to that.

This is the highest number of downloads the MLB saw this year, but not the highest all-time. Revenue, however, is a whole other story. So far, in 2021, the MLB saw its highest-grossing days, and not by a bit.

We estimate that Spring Training added nearly $3M in net revenue from iPhone and Android users, and the first few days of the season have already added $1.2M in net revenue, which means many of the subscriptions that started last month weren't canceled.

Want to predict which app or game will IPO or get acquired for big bucks? Look no further than revenue growth rate.