Last week I talked about how Apple's new disclosure requirement and opt-in system for tracking would change the App Store, and this week, with iOS14.5 in the wild, we can start to see what it's going to be like.

According to our intelligence, nearly 10K apps and games have already enabled ATT and are requesting permission to track. Roughly 20% of the total is made up of games, which I feel is a bit low, but expect both the total and the share of games to grow much higher in the coming days. 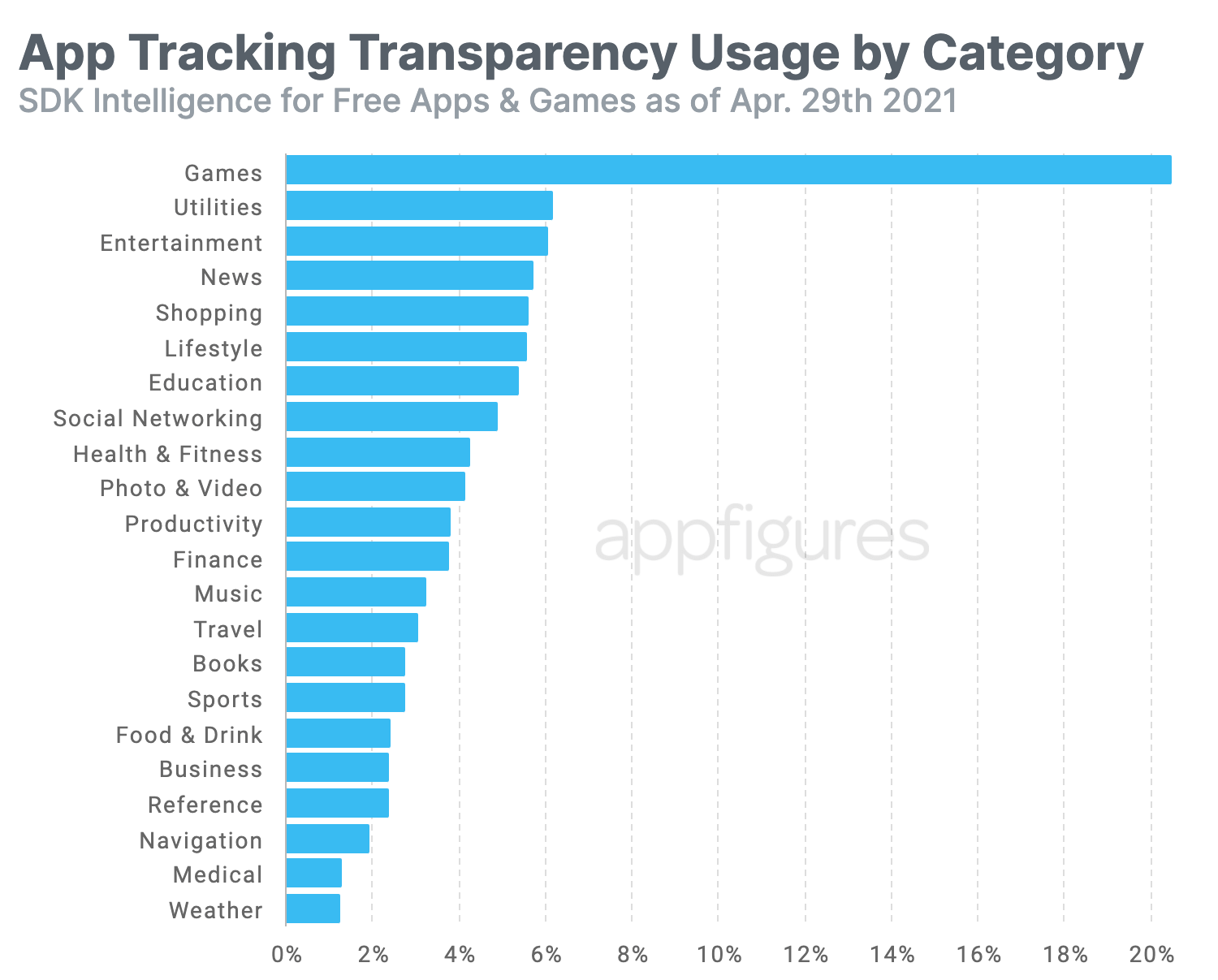 I'm not surprised to see apps turning this on right away instead of stopping to track. Companies like McDonald's and Spotify and data mungers like Facebook and TikTok have a big enough following that they have to.

Asking isn't the hard part, though. The real challenge is to get people to actually say yes.

Based on a quick survey I ran on Twitter, a little more than half of respondents who saw an ATT prompt in the wild said they didn't allow tracking. Which is exactly what I was talking about last week.

Half is a big number. Losing half of inputs would break most models, regardless of how good they are.

I then looked at just how these companies are explaining the need to track to their users. Apple lets you customize the prompt a tiny bit, and you can also have a pre-prompt, so I was hoping to see the kind of language Don Draper would write.

Nope! I was shocked to see that most developers didn't even bother with their copy. 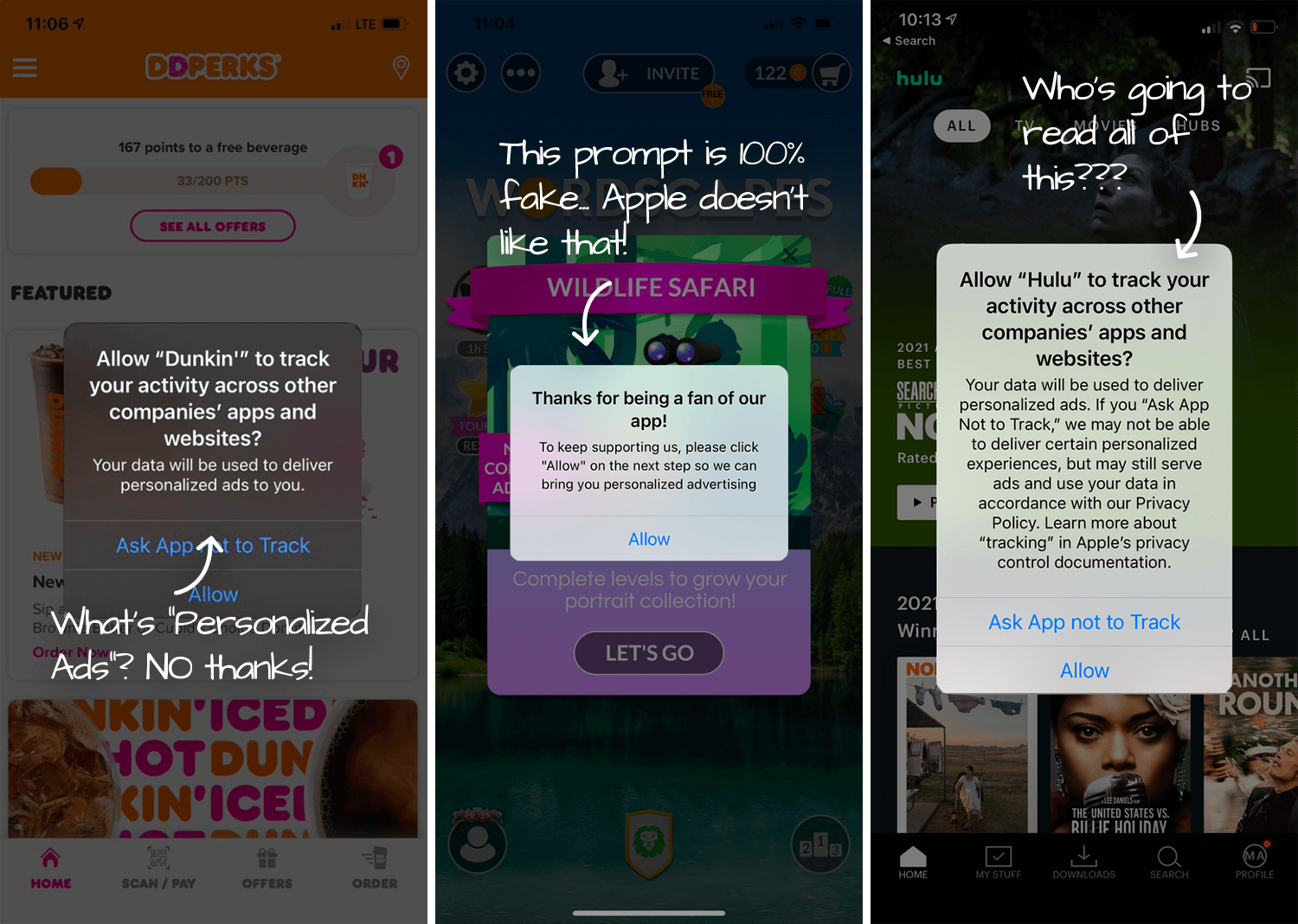 For example, Dunkin (Donuts)'s explanation for why they need to track you is, "Your data will be used to deliver personalized ads to you." This is, truly, the equivalent of programmer art and should have no place in an app of this scale.

I used attprompts.com to see screenshots of prompts. It's a collaborative initiative from @sylvainww, which I highly recommend checking out and contributing to if you can.

As a user, do I really want to give my "data," a now nebulous term that's synonymous with "my privacy," to a company that sells coffee so they can serve me ads? Short answer, no.

I'm in rambling territory now, but the apps that are trying, and did design a pre-prompt to introduce the users to the concept of tracking, like McDonald's, are not even within Apple's guidelines.

The bottom line: There's a lot more to unpack here, which I will write about outside of the newsletter, but it's pretty obvious this will become critical to seeing success on the App Store.

Getting users to share their data is going to be a serious uphill battle. Apple has a lot of restrictions around what you can do to get users to do it, so developers will need to get very good at copywriting. Long term I expect that won't be an issue, but until we get there, those who don't will suffer.

If you're now sure what your ATT prompt should say, please hit me up on Twitter, and I'll try to help.

Let's get back to data.

A mystery struck the App Store earlier in the week. An app by the name of WebWatcher climbed to the top of the U.S. chart quickly. 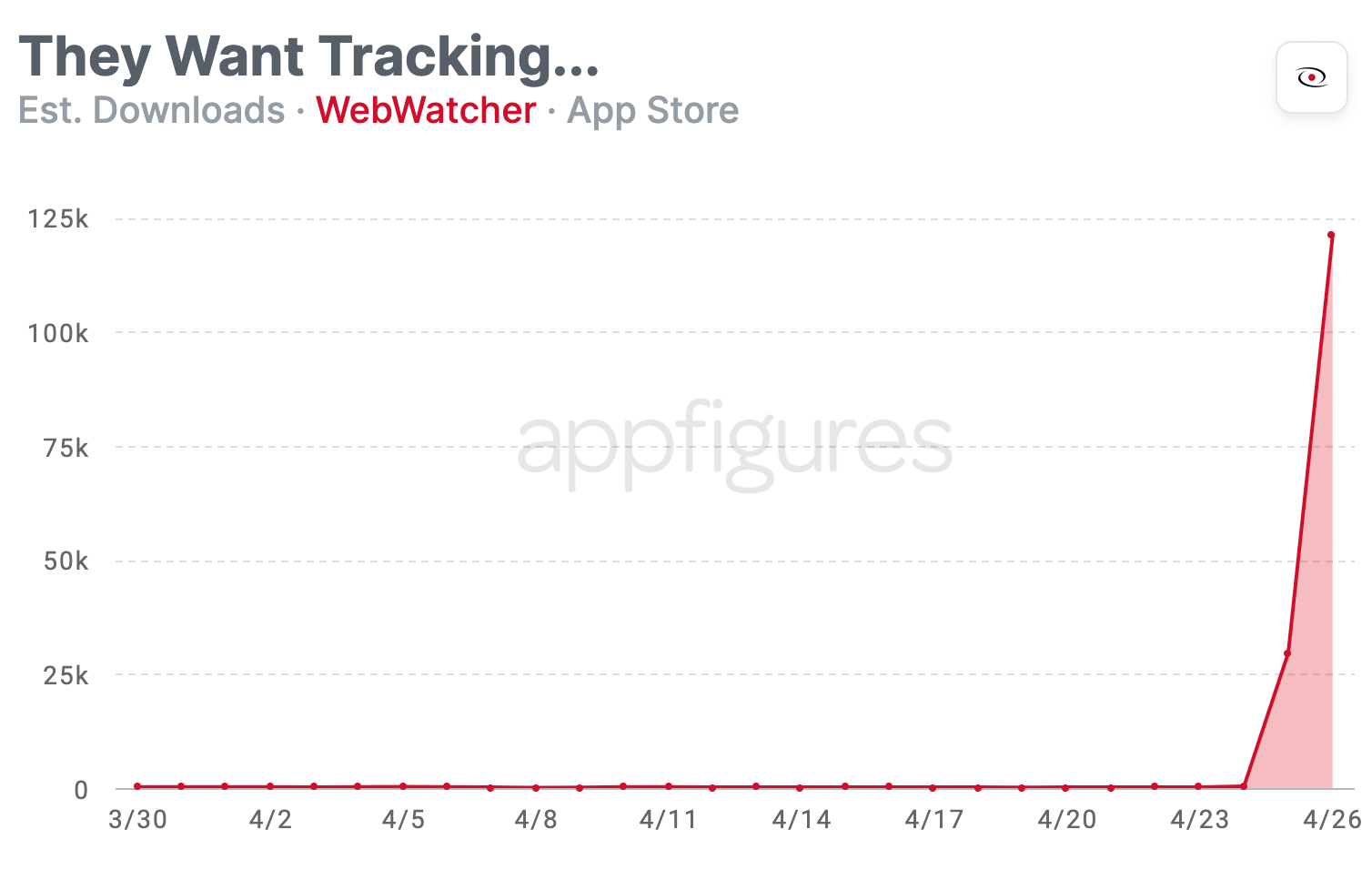 WebWatcher's downloads exploded on Sunday night, going from a couple hundred in the days before to 30K on Sunday and more than 100K on Monday, according to our estimates. No one really knew why because the app hasn't been advertising and hasn't even been updated in over a year. Some concluded it was a scam. Then, at 11 pm EST, WebWatcher was no more. Gone. Poof.

Apple didn't disclose that they took it down, but its abrupt disappearance can only be explained by that. I suspect Apple didn't find what WebWatcher does, which includes tracking everything that happens on a device, from text messages to calls and app usage, and sending it to someone else.

This isn't functionality you can get out of an iPhone easily, so WebWatcher must have gone about it in a way that doesn't line up with Apple's terms.

Now, why and how did WebWatcher even get to the top, and so fast? TikTok. A video that mentioned WebWatcher went viral and caused this whole thing.

My takeaway: Legit or not, this isn't the first time an app explodes because it went viral on TikTok, and I bet you not the last. It's time to get those influencers influencing.

3. Audiobooks are a big business!

Audible, the audiobook company that's owned by Amazon, has seen its revenue skyrocket in the last few months. 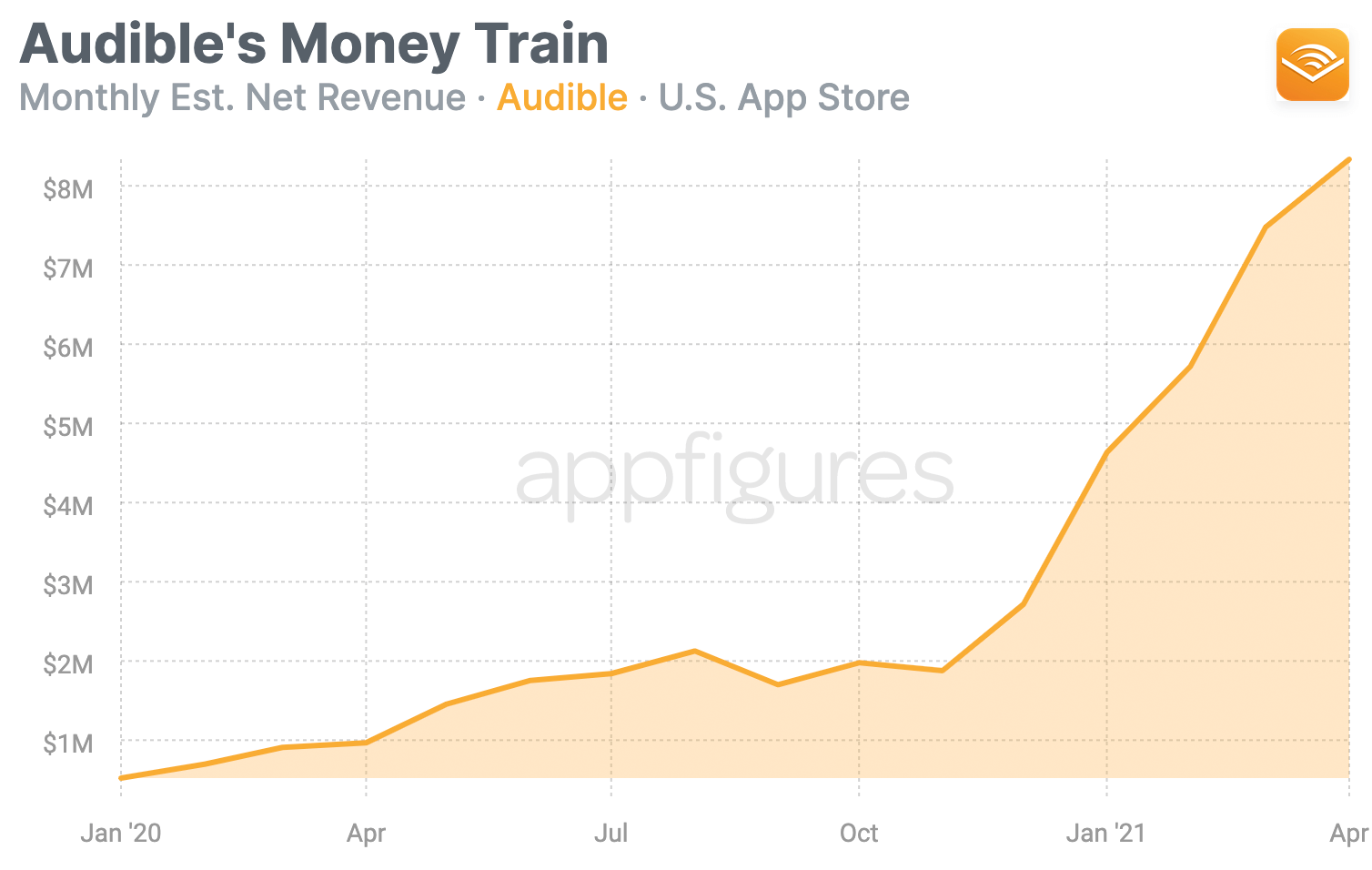 Unlike the Android app, which charges directly, the iOS app uses in-app purchases to monetize, which gives us insight into how much money Audible is making from the App Store.

That's probably a drop in Amazon's big bucket of cash but is a proxy for just how much demand for audiobooks has grown in the last year.

How do you feel about audiobooks? I still prefer a physical book, but I know I'm in the minority.

Why is this interesting? Audio is growing and fast. Podcasts and Clubhouse confirm this, and audiobooks fit so naturally into this group. I used to think audio was better for when we're on the go and that being stuck at home would reduce the demand for such things. But, being stuck at home reduces social interaction and gives us more time to the point audio is becoming a more exciting medium to consume content through.

Andreesen, the lead investor behind Clubhouse, must have realized this early on.

4. Another SDK is about to IPO

Another week and another IPO announcement related to the app business. This time, it's not an app but rather a service provider.

Mapbox, an SDK that replaces Google Maps for both iOS and Android, has announced its plans to IPO via a Special Purpose Acquisition Company, better known as SPAC.

Google and Apple both provide solutions for maps on their platforms, and Google has a solution for iOS apps which is extremely popular. Can Mapbox compete with those? 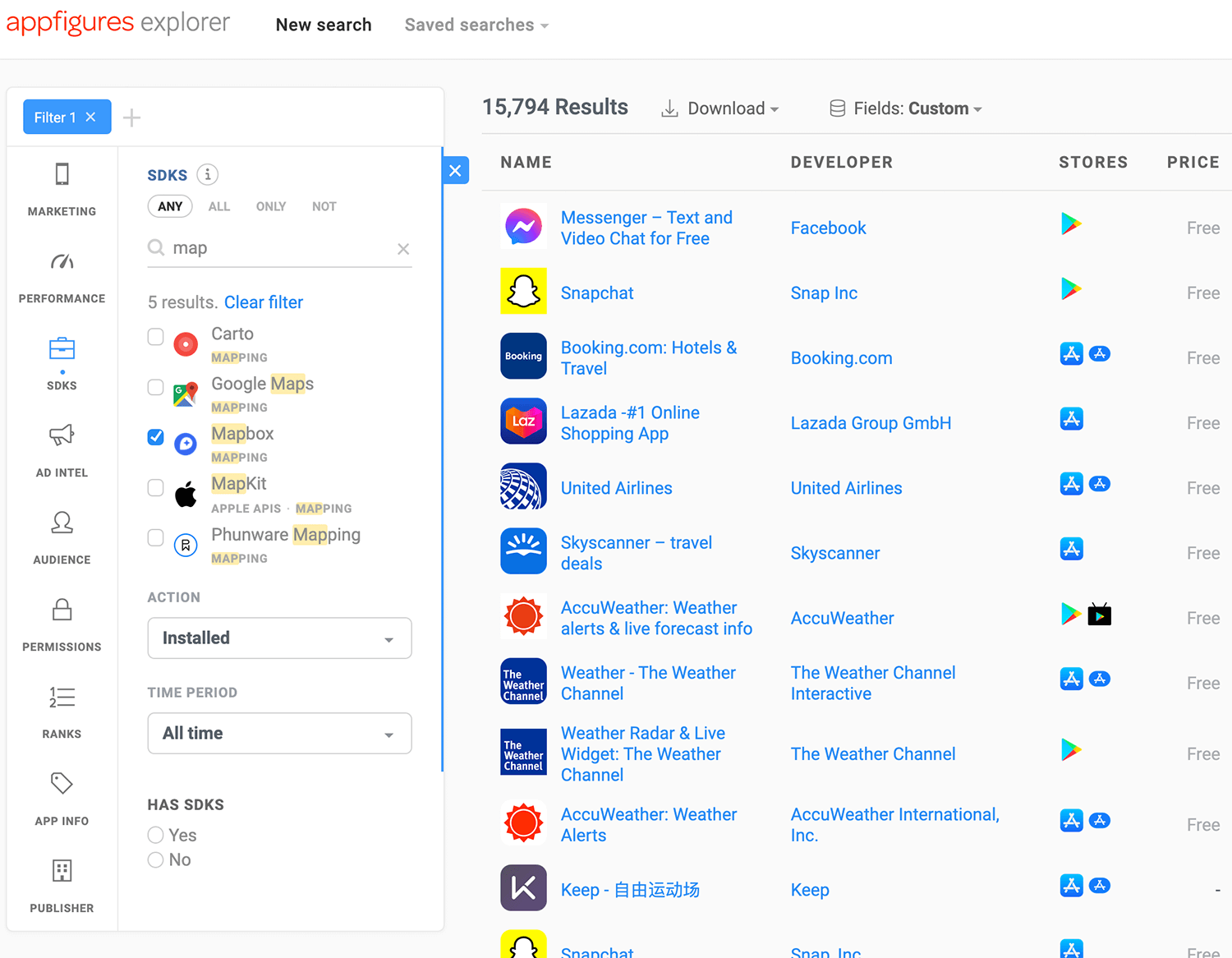 Right now, Mapbox is being used by nearly 16,000 iOS and Android apps according to our SDK Intelligence. The list includes Facebook Messenger, Snapchat, Strava, Lyft, Peloton, The Weather Channel, and many other names you probably know, which makes it hard to discount Mapbox's success.

But, my maybe still stands.

Let's look at the pros and the cons.

I've been generally positive towards apps and services that IPOd over the last year, but in this particular case, I'm more apprehensive. The cons outweigh the pros enough that I think this IPO is more of an exit attempt for the investors than a real indication of success.

Disclaimer - I'm not a financial advisor. I just analyze the data. This isn't investment advice.

Summer is right around the corner, and with many states here in the U.S. announcing their plans to fully re-open, vacations are on everyone's mind.

Airbnb has been slowly making a comeback after losing nearly all of its downloads last year, and while its growth is slowly picking up, there's a competitor that's trying to outshine it. 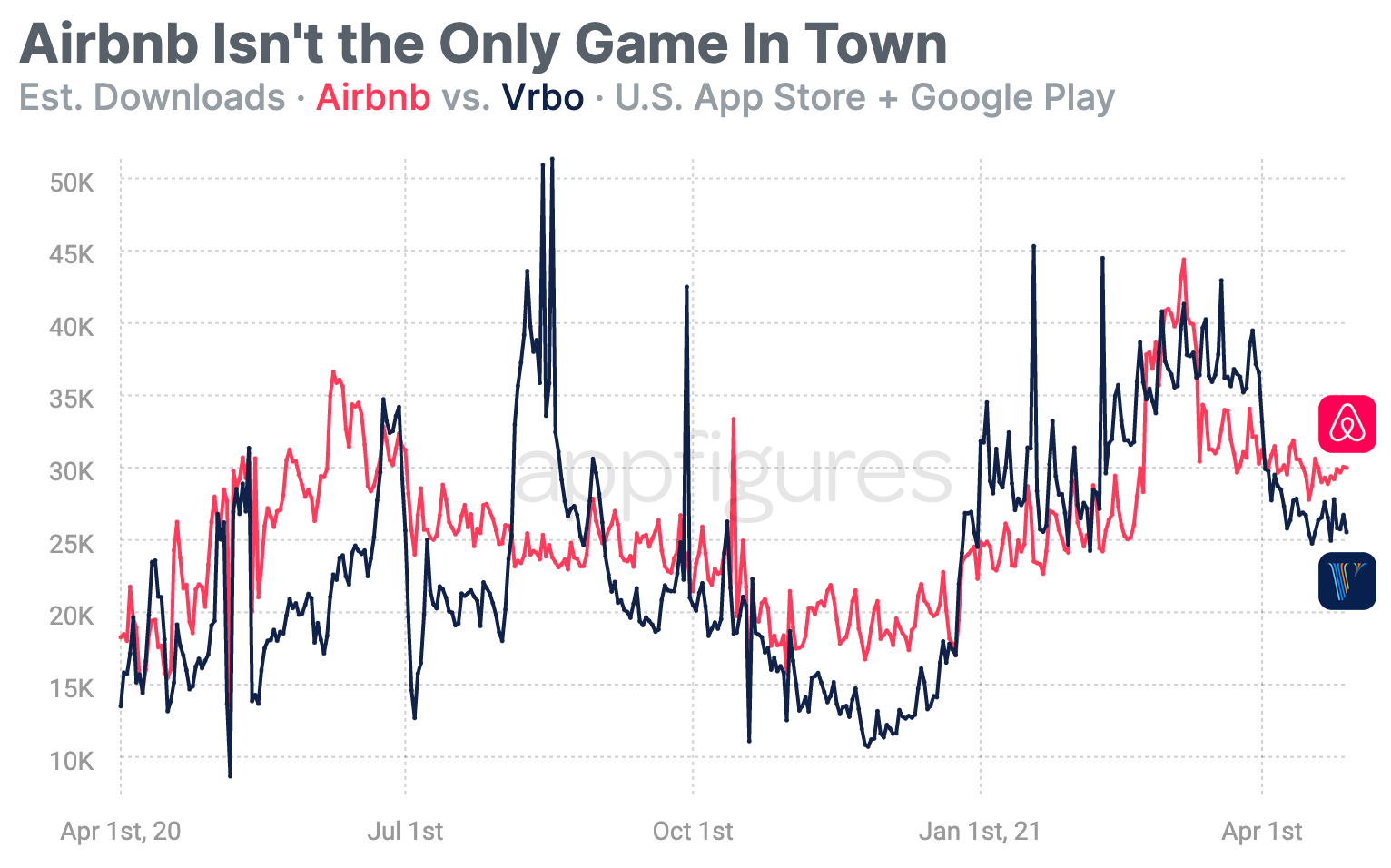 That's Vrbo, a service that looks and feels almost identical. Download-wise, Vrbo is giving Airbnb a run for its money right now.

According to our app intelligence, Vrbo and Airbnb are very close in downloads in the U.S. Since the beginning of April 2020, Vrbo added 9.5M new mobile users while Airbnb added 10M. That's a small enough difference.

Why is this relevant? Imagine a world where Uber was the only app to get a ride. That might be ideal for Uber but not for riders. Having Lyft around keeps things competitive. Airbnb enjoyed not having competition for too long, and ultimately it's us users who suffer.

Vrbo is advertising heavily to get traction, which isn't all that scalable, but if it can become sticky, Airbnb will have to improve to compete to keep users coming and maybe put an end to horror stories of bad customer experience that Airbnb does little to solve.