We just published our monthly report that ranks mobile games by downloads and revenue. The same trends you're already used to, if you've been following our monthly reports, are continuing. Hyper-casual games burst their way with downloads while household brands rake in all the cash.

Let's see who's doing what: 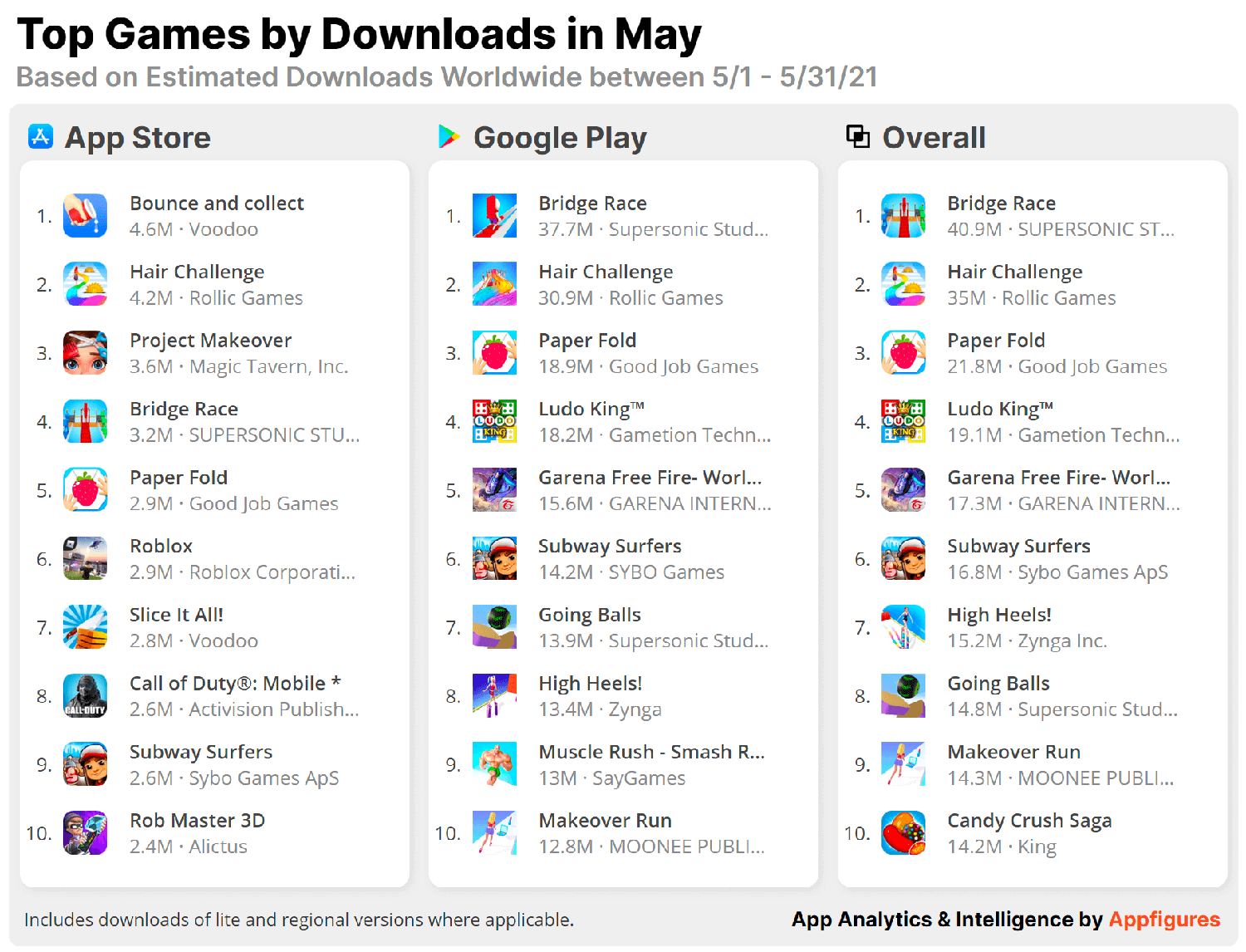 Bridge Race was the most downloaded game in the world across the App Store and Google Play in May, earning a whopping 41M downloads, according to our App Intelligence. This is the title's second month in a row of being #1, with downloads growing 55% in May vs. April.

Candy Crush closed the list with 14M downloads, with the nostalgic favorite, Subway Surfers, somewhere in the middle surrounded by hyper-casuals.

Oh, and Candy Crush was the top earner in the U.S., bringing in more than $32M coins (aka net revenue) from U.S. players across iOS and Android devices.

Check out the full report for more details and revenue analysis.

Last weekend a hall of fame boxer and a YouTuber (also a professional boxer) took the stage for an exhibition fight, which was streamed by Showtime. 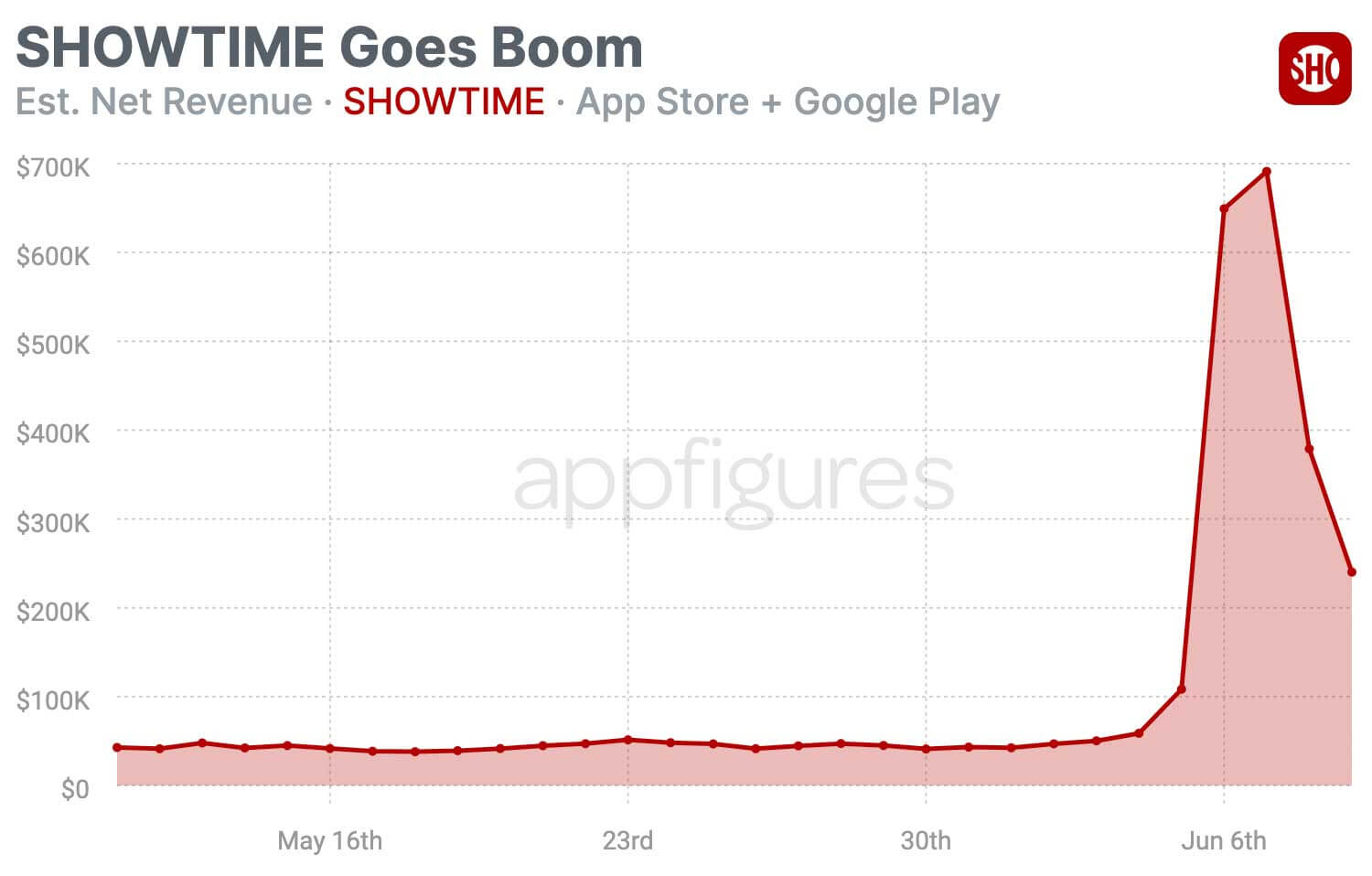 Sports = downloads when it comes to streaming. I look at content makers like HBO Max and Disney a lot, but we can't ignore the sheer power sports streamers have, and now, seeing that force translate into downloads and revenue. And remember, it's almost always recurring revenue for the platforms.

Showtime's revenue rose more than 15x between Sunday and Monday with a total haul of more than $1.3M of net revenue, according to our estimates. For context, the previous weekend earned the streamer just $85K.

There's a bit more to this story, however. The demand on Sunday seems to have overloaded Showtime's servers, causing many to not be able to use the app (and the website) to the point where Showtime announced they will issue refunds.

Bottom line: Streaming is slowly choking cable, and it's a new reality for some streamers. Overwhelming demand means Showtime's projections were off (or negligence, but I don't think so), which is one of those good problems to have.

The more streamers understand the potential, the more you'll see them attempt to get as many viewers as possible because switching apps is not the same as changing channels.

Another week another app ascending to the top of the chart from seemingly nowhere. That's Voilà, a fairly new app (released in March) with a not-so-new concept of turning pictures of faces into cartoons.

I gave Voilà a go expecting it to be just like every app that promised a beautiful result but falling short with my own pictures, and I'm surprised to say Voilà actually delivered.

The app also asked for a ton of permissions and tracking, but that's pretty standard for these things now... 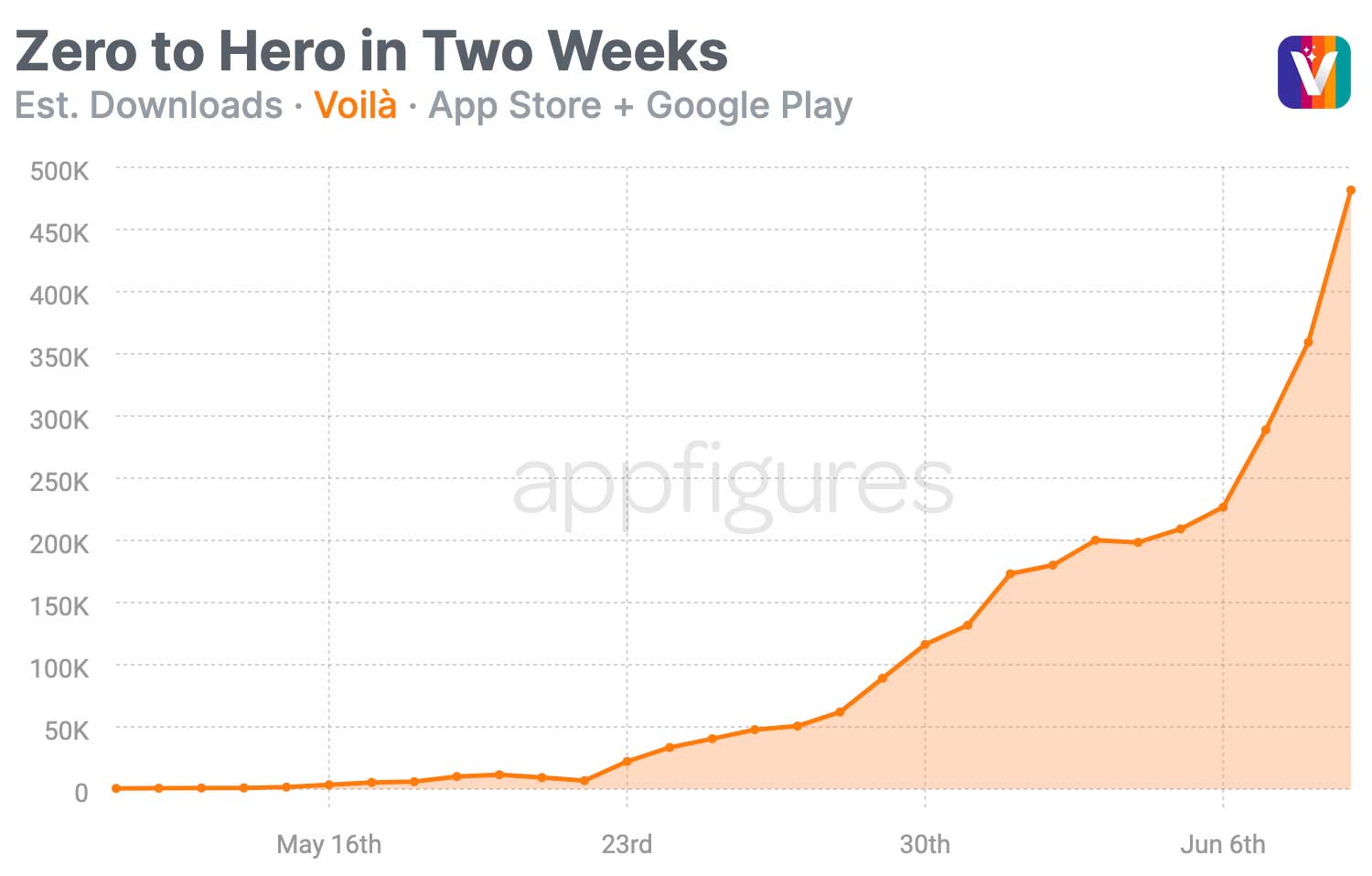 Downloads have been growing consistently since the end of May, from just a few hundreds to over 480K across the App Store and Google Play on Wednesday, the app's biggest day of downloads, according to our App Intelligence.

This isn't the first or last time a face changer goes viral for a bit. While nice, I expect Voilà to follow the same trend and see its days of glory end next week. But... with kids out of school, it's possible downloads will continue to rain for longer.

Is this a trend? This app, no. The volatility of the top of the charts, absolutely. One thing I love about the App Store is how sensitive its algorithm. That's, of course, a double-edged sword because easy come easy go, but the ability to gain popularity fast is a benefit to both users and developers.

Did you see Reddit crack the top 10 most downloaded apps list in the U.S. this week? I sure did.

Reddit's popularity has been soaring lately. Between the need for more news and meme stocks, more and more people see Reddit as a mainstream platform and not just another online forum. 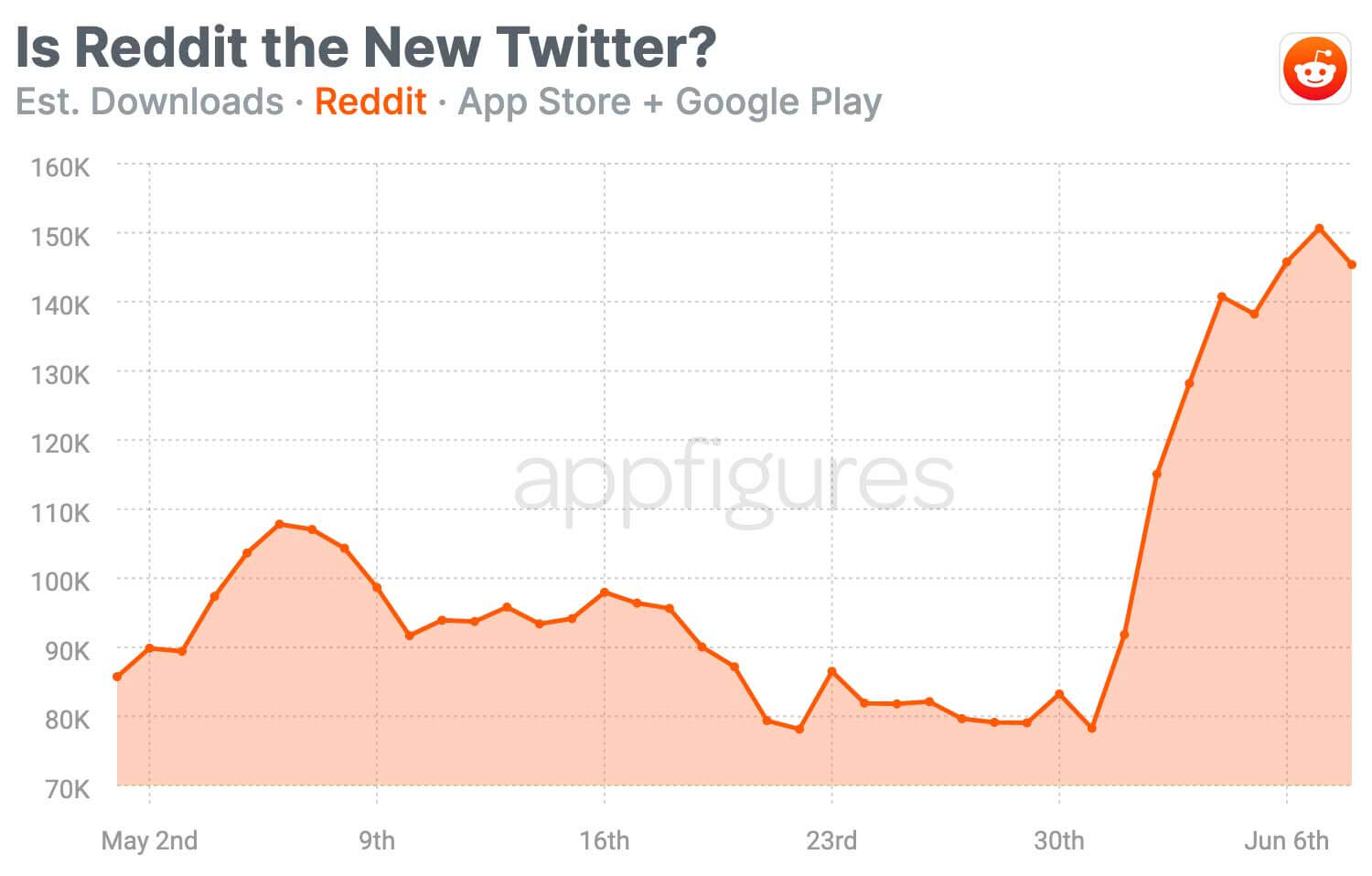 So far in June, daily downloads have nearly doubled, rising from around 80K in May to 150K this week.

The rise aligns with the latest batch of excitement around meme stocks, something one subreddit is directly responsible for and keeps giving Reddit more downloads.

This bump isn't nearly as high as the last time meme stocks were all the rage, back in January, but is significant enough to say Reddit is slowly making its way into the list of platforms everyone "knows" about.

Just a thought. If we go a few years back, there's another platform that evolved that way, and that's Twitter. It might be a bit hard to remember when it hit its inflection point, but I was there from the start and remember how it evolved from a thing a few tech folks use to something people use to yell at politicians. Reddit is very different, but maybe.

Apple's developer conference is ending today, and what a week that was. I personally prefer the in-person setup a lot more because the talks were more in-depth but confined to our favorite streaming devices, it was another WWDC-by-app.

Apple Developer, the app developers use to view WWDC sessions, is available for download in the App Store, which means it's covered by our App intelligence.

I took a look to see where new downloads for the app came from this week, and here are the top 10 countries: 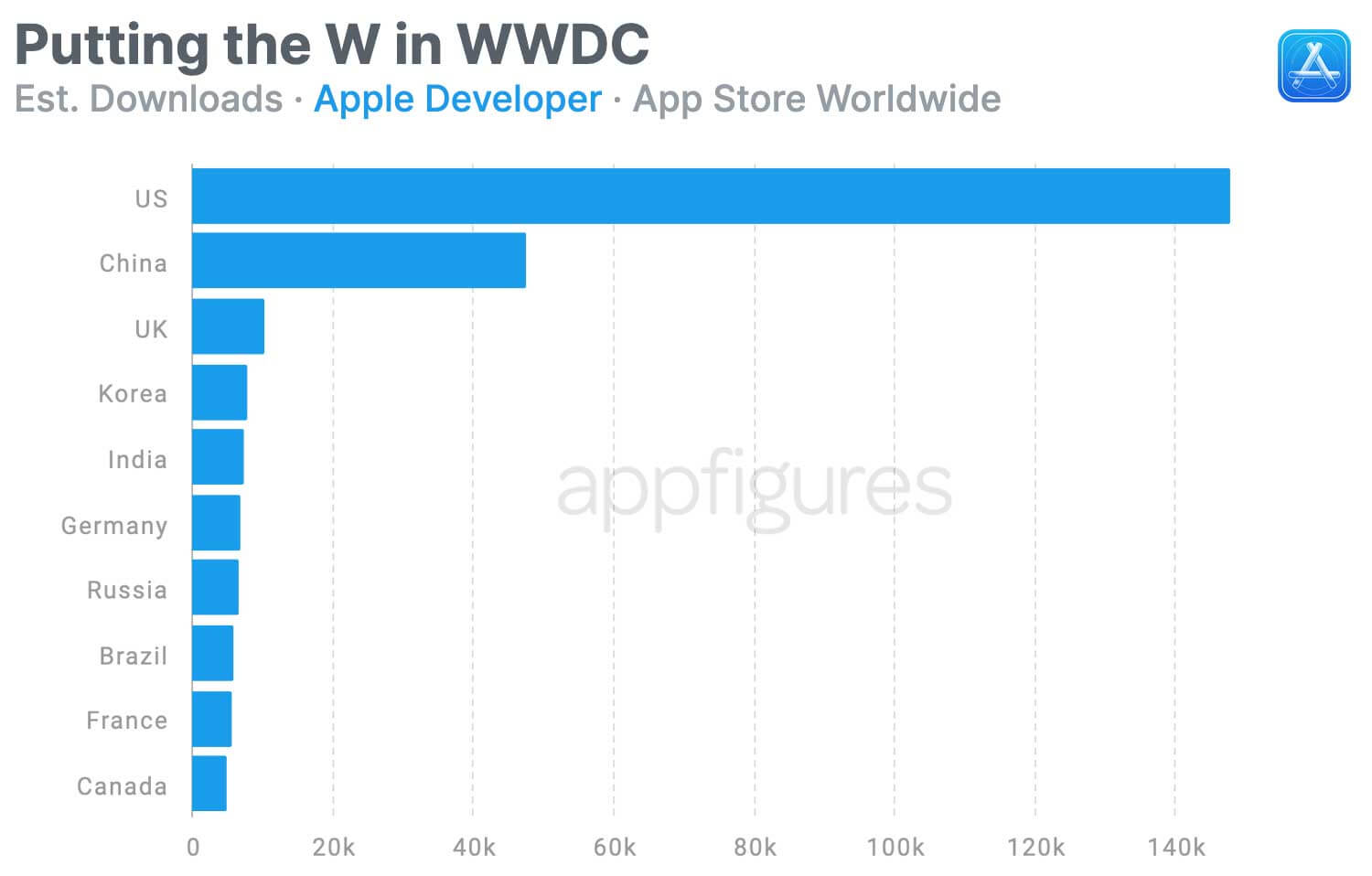 Our estimates show the U.S. was responsible for about 47% of the more than 311K new downloads the app saw between Saturday and Wednesday. Right behind it, also with a double-digit share, is China with 15%. The UK, South Korea, and India rounded up the top 5 countries.

So what? WWDC, historically, was a very exclusive event up until a few years ago. Tickets were very expensive and very limited, and videos of the talks were not live-streamed, so excited developers who didn't get a ticket had to keep all that excitement bottled up for weeks. That's now gone, and these new downloads show us just how excited they are.

What Can You Do with App Intelligence?