Last summer, we saw a slew of mobile-related IPOs, a few of which I covered in this newsletter. Well, summer's here and so is a fresh batch of back-to-back IPOs in our space.

The first is Outbrain, which goes public as I'm writing this. Outbrain is a 15-year-old ad network that promotes content within other content. Its core is in web ads, but as more content (news, etc.) shifted to mobile apps, so did Outbrain did

Today, Outbrain offers an SDK to app developers who want to monetize their apps with native ads. Outbrain's future growth depends a lot on how many apps this SDK is in, which apps those are, and what's churn like.

Using our SDK Intelligence, we can answer all of these questions. 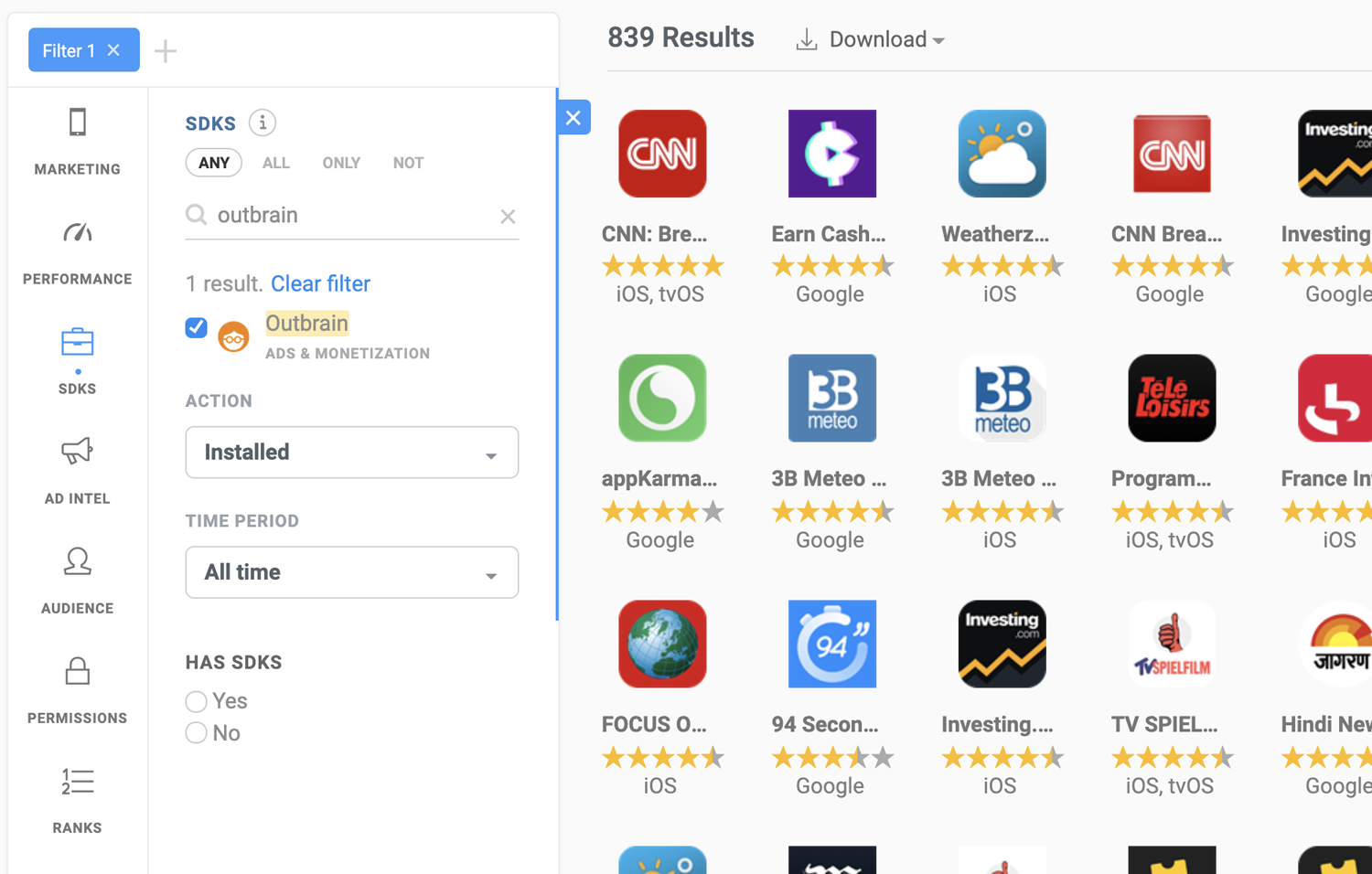 I'm no financial advisor, so I can't tell you if this is a good or bad buy, but what I do think is that while Outbrain is still predominantly web-based, it's got a foothold in mobile that will be hard to unroot. There's a lot of growing it needs to do, and it's not just a matter of making sales but rather evolving its ad formats and SDK offering. How they execute on those will indicate how good of a buy the stock is.

Did you attempt to learn a new language during the pandemic? You're not the only one. Duolingo, the popular language-learning app millions have turned to, is going public next week.

Duolingo joins a healthy list of app-first and mobile-game companies that have become popular enough in recent years to go public. If you recall, in most of those IPOs, app revenue was a good indicator of growth, and in this case, it is as well.

But before we start counting beans, let's look at demand (aka. downloads) 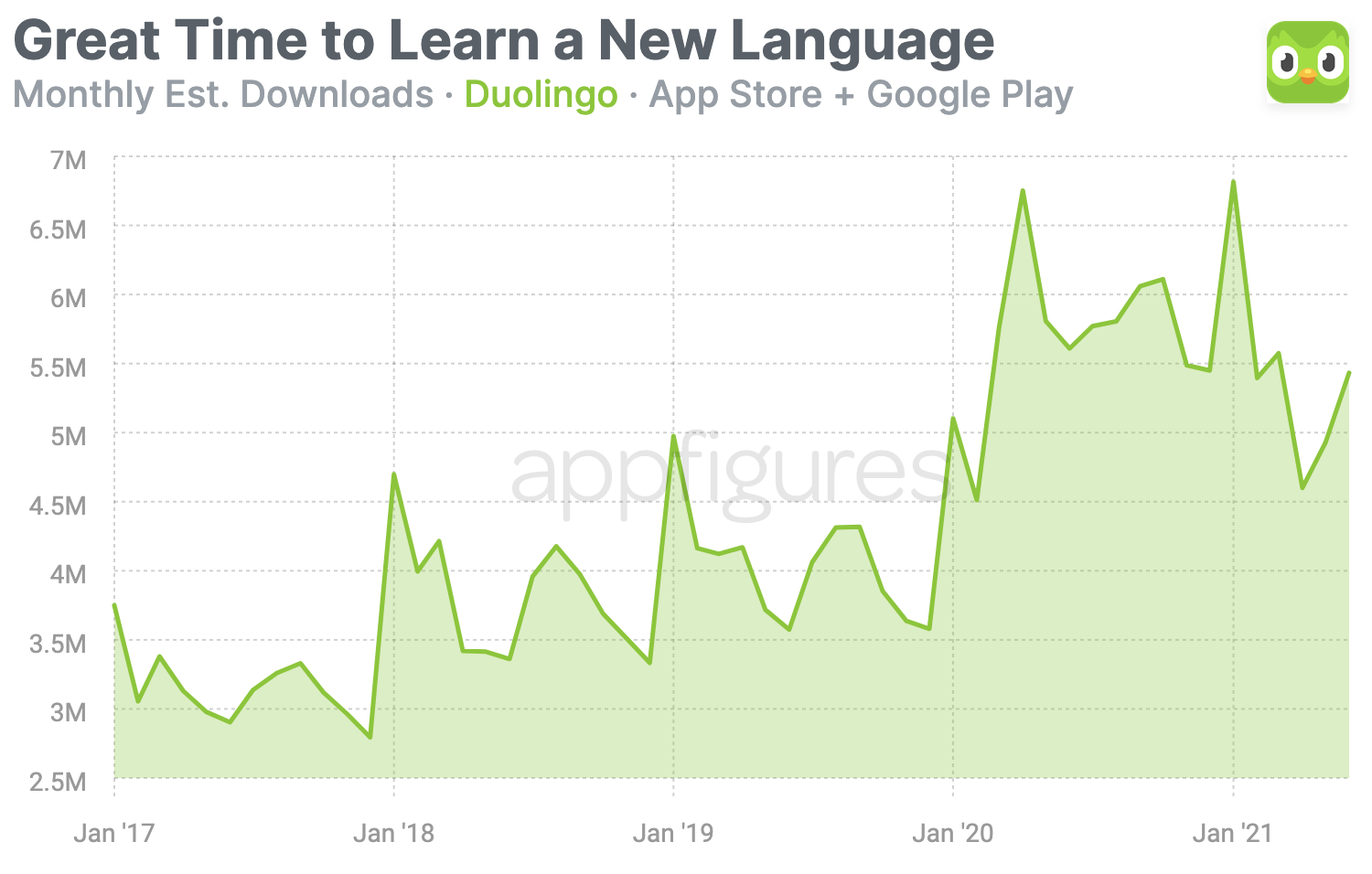 Looking at weekly downloads, we can see that pre-pandemic Duolingo was already getting millions of new downloads every week. But once the pandemic hit, those numbers skyrocketed. 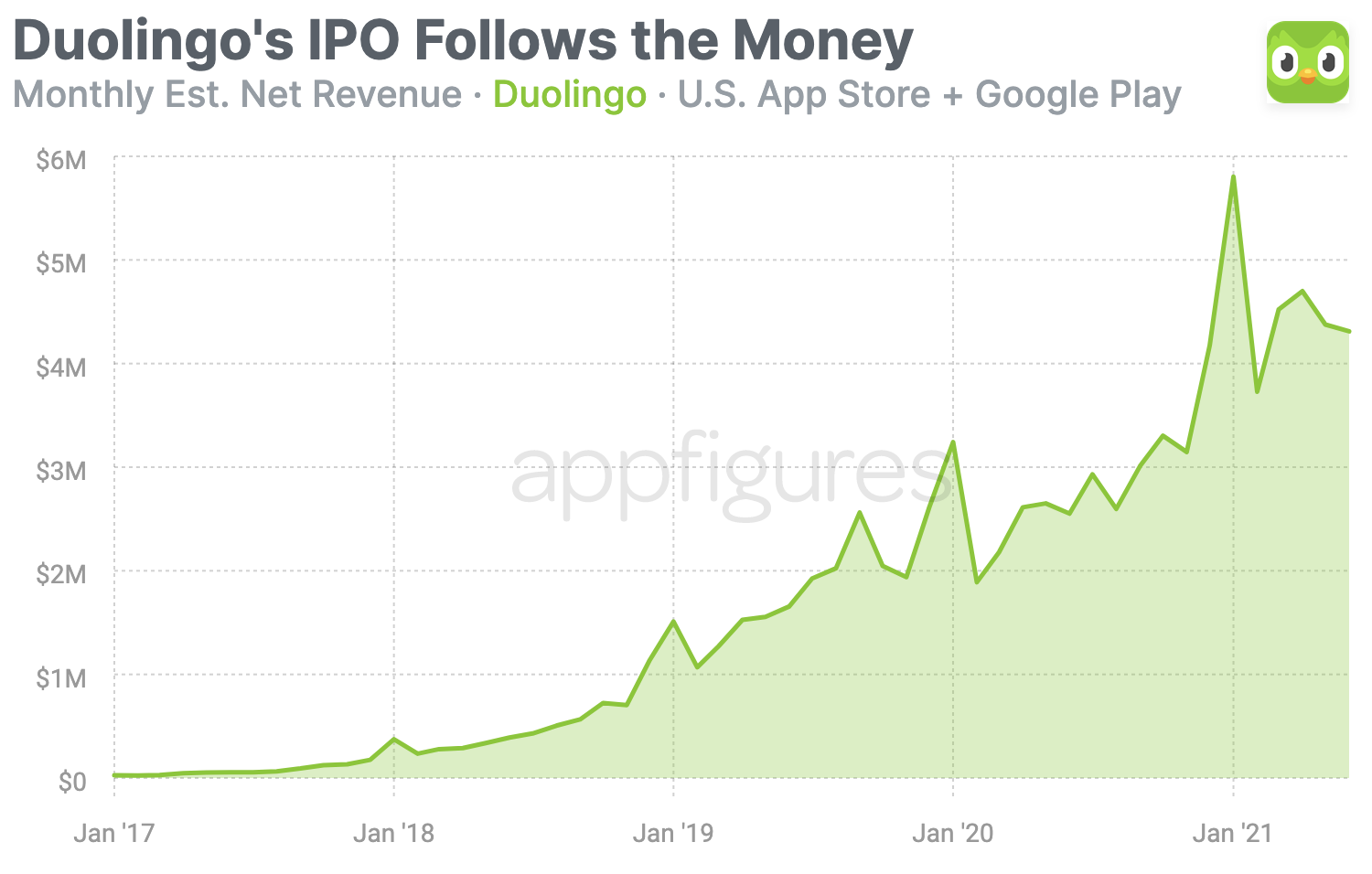 In the U.S., Duolingo's biggest market by revenue, the app is adding roughly $1M in net revenue every week, according to our estimates. Much like downloads, growth is heading up and to the right—Pre and post-pandemic.

Estimated net revenue in the U.S., by year:

That's a big chunk of change and look at that growth. Even at a super simple estimation for the rest of 2021, of just doubling the 1st half's revenue, Duolingo stands to double its revenue year over year, something it hasn't accomplished yet, according to our estimates.

Keep in mind, this is net revenue, so it's after Apple and Google take their cut. This is what Duolingo keeps.

Certainly IPO worthy if you ask me.

Compared to Outbrain's IPO price of $20, Duolingo's target is almost 5x higher, which is sure to leave out more retail investors. But like apps before it, app downloads and revenue are likely to offer a direct indication for future success, as are downloads and revenue of existing and new competitors that want to ride the globalization wave.

By the way, I analyzed Duolingo's ASO last year, and it's one of the most popular App Teardowns I've done so far. Check it out

Last IPO for today is, again, a favorite app of mine--Robinhood. I've been a user of Robinhood for quite a while now and have been covering it here in the newsletter since launch. I even stuck with it during the Gamestop depression.

Robinhood's IPO has been in the air for a long, long time now, and it makes total sense. The app's unique approach to trading, by gamifying the experience, so it's accessible to mere mortals (aka retail investors) has earned it the kind of success traditional trading apps can't even get near.

Its road to IPO was a bit bumpy from a PR standpoint, but overall, downloads have been going in the up and to the right direction for long enough to make it the go-to investment app for many. 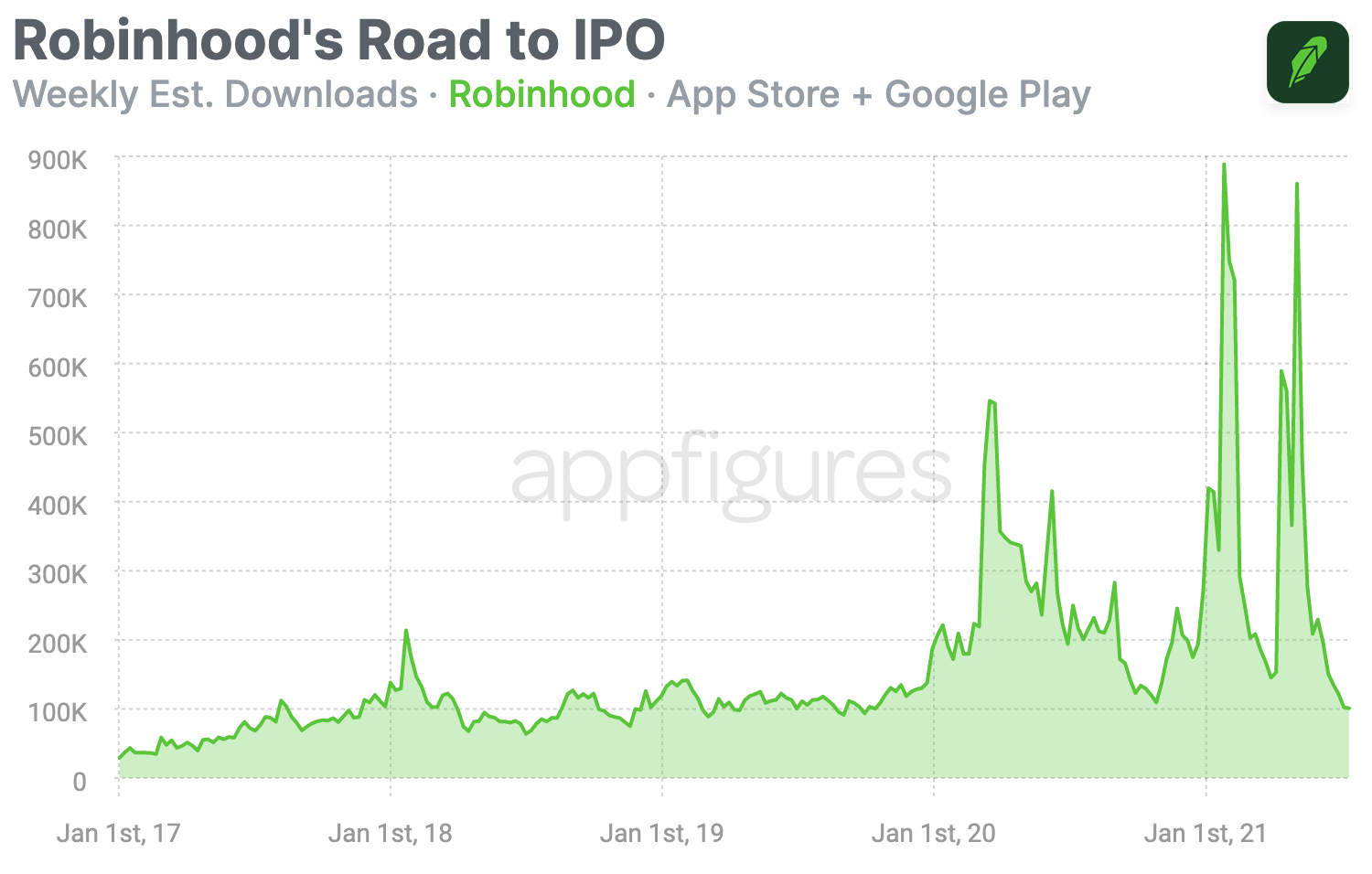 2021 was what I think will become the pivotal year for the app. It was already on a high from pandemic trading and then at the center of the WallStreetBets/Gamestop shenanigans, which helped it soar and also plunge, and then it got into crypto.

Good, bad, ugly, and pretty much everything in-between.

We're only in the middle of the year, and downloads are already very close to 2020. So far this year, Robinhood was downloaded by nearly 10M users across the App Store and Google Play, with multiple weekly peaks of more than 800K downloads, according to our estimates.

For comparison, traditional investment apps from Fidelity, TD Ameritrade, and E*TRADE, together, added 5M downloads in 2021. A half! And that's higher than what they would have seen if there was no controversy with Robinhood.

If you've been reading this newsletter for a while, you know that every time I mention Robinhood, I also talk about how it's becoming a household name and how that's what's going to make it ubiquitous. An IPO will certainly solidify that.

As an app-first company, Robinhood's success will be closely tied to new downloads as it seeks to tap the growing market of mere mortal investors. I'll be keeping a close watch on that (and you can too with our affordable app intelligence)

Also also, I analyzed Robinhood's ASO a few months ago. Check it out

One of my favorite streamers, HBO Max, made its first post-launch expansion last month. The streaming platform the took the U.S. by fire is now available in 39 countries in Latin America and the Caribbean.

Curious why HBO Max is starting its expansion by going south? I had a look at Disney+'s downloads, and it's very clear that Latin America outpaces Europe. 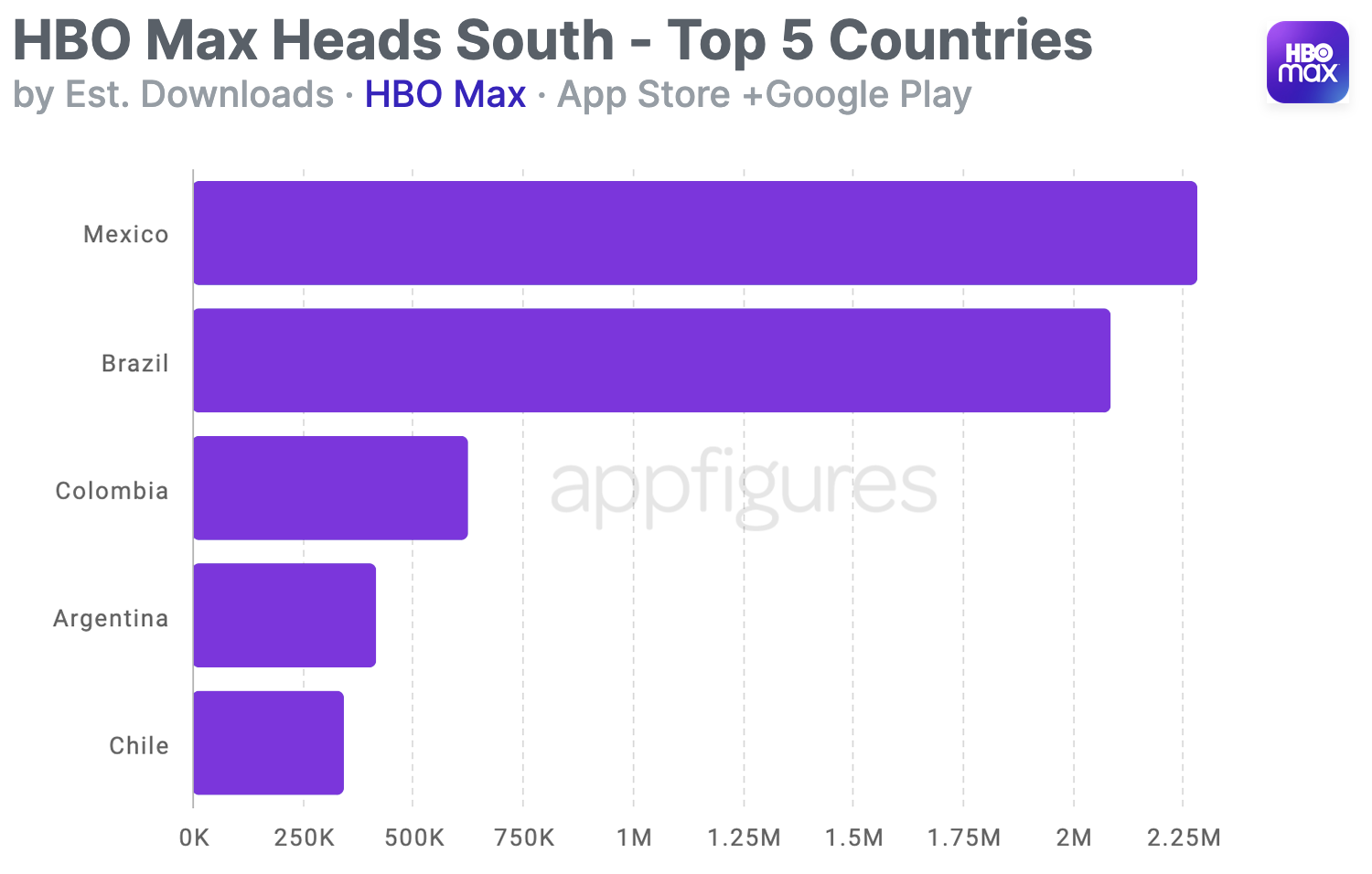 A look at HBO Max's downloads confirms it as well. The move was a smart one. Since the beginning of July, HBO Max was downloaded more than 7,000,000 outside of the U.S., based on our estimates.

Mexico and Brazil were responsible for most of those, adding 2.3M and 2.1M downloads in the first 20 days of the service's availability.

HBO Max's pricing model is a bit different in the new territories and comes with a free trial and a hefty discount of 50% for early adopters, so we'll have to wait a bit before we can analyze revenue and its potential.

5. Peloton is doing what?

Peloton, which makes exercise bikes and live classes, announced it's working a game to get bike owners cycling. It feels like everyone wants to get into games recently, so I'm not too too surprised. But why is Peloton making this move?

For that, we have to look at a little thing called revenue. 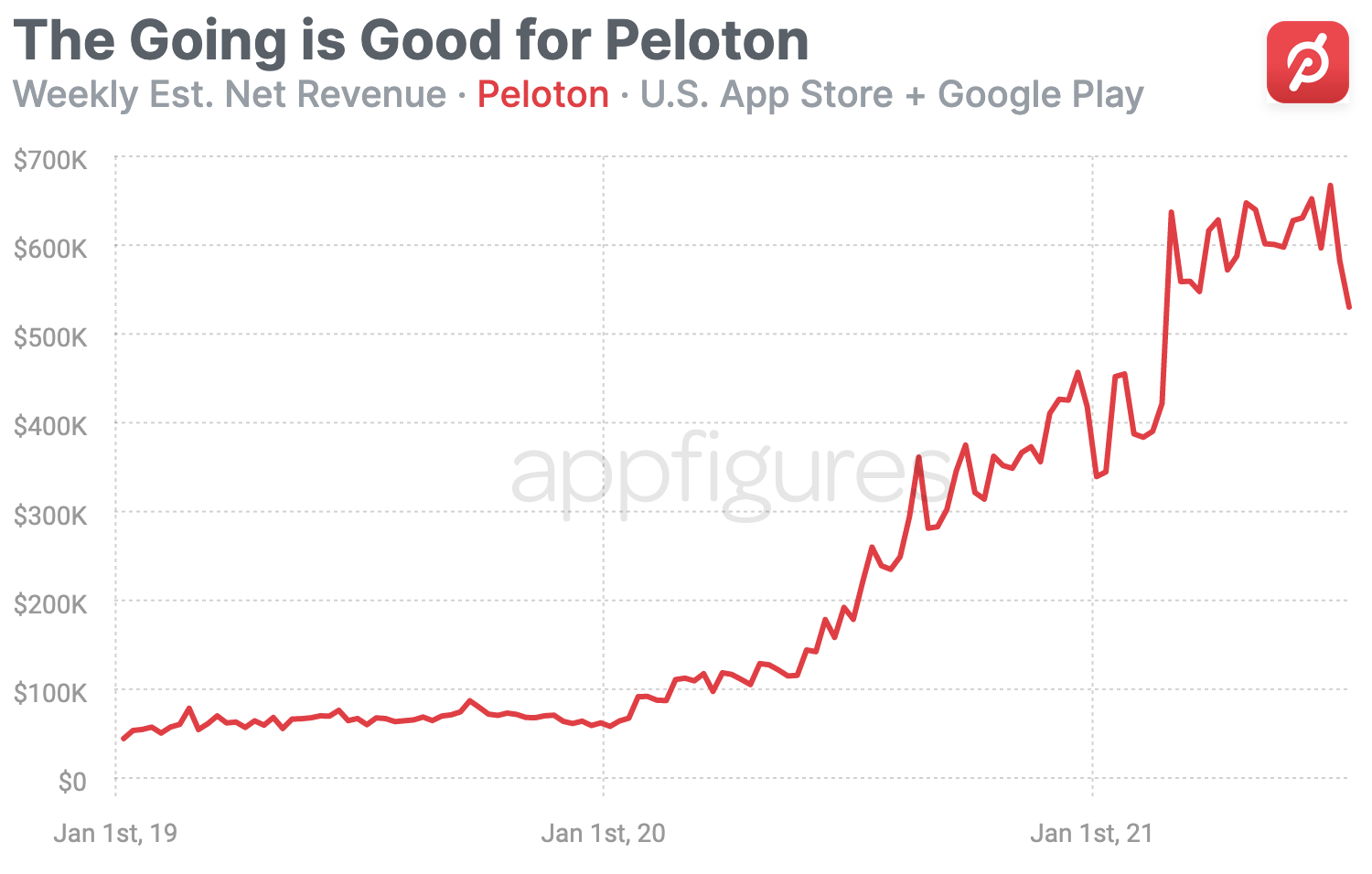 Let's rewind a few years. Peloton, which organizes and streams classes, was doing very well before the pandemic. It went public in 2019, and demand for its bikes was increasing at a healthy rate. Then came the pandemic that locked everyone at home with no access to gyms, and while bike orders went through the roof, Peloton was busy capitalizing on another element--in-app content.

Peloton offers workout videos delivered via app at about $13/mo.

At the end of 2019, Peloton was adding about $10K/day of net revenue from content through its app in the U.S. By April of 2020, net revenue had already more than doubled to $25K/day, according to our estimates. Daily revenue doubled again by the end of summer, with $50K/day in August of 2020, and in June of 2021, net revenue was hitting six digits.

How does this tie back to games? Working out requires discipline, and while some have it, more don't. That's why we see demand for workout apps skyrocket in January, only to decline by February. Every year. With a game, Peloton can literally gamify the workout experience, hooking its audience and making sure they continue to use its equipment and app.

Another way to say it is, Peloton is going down-market because there's a lot of opportunity for growth there, and a game is a very easy way to do that. This is a trend I've been seeing with a lot of companies and one that I've been betting on for a long, long, long time.