Although this isn't the Black Friday edition, there's some news in the shopping world that's worth exploring.

Earlier this week, French regulators announced the country is asking Apple and Google to remove the Wish shopping app from their stores in France. The reason, as they explain, is that Wish makes it possible for sellers to cheat consumers by saying they're selling brand names but really sell knock-offs. 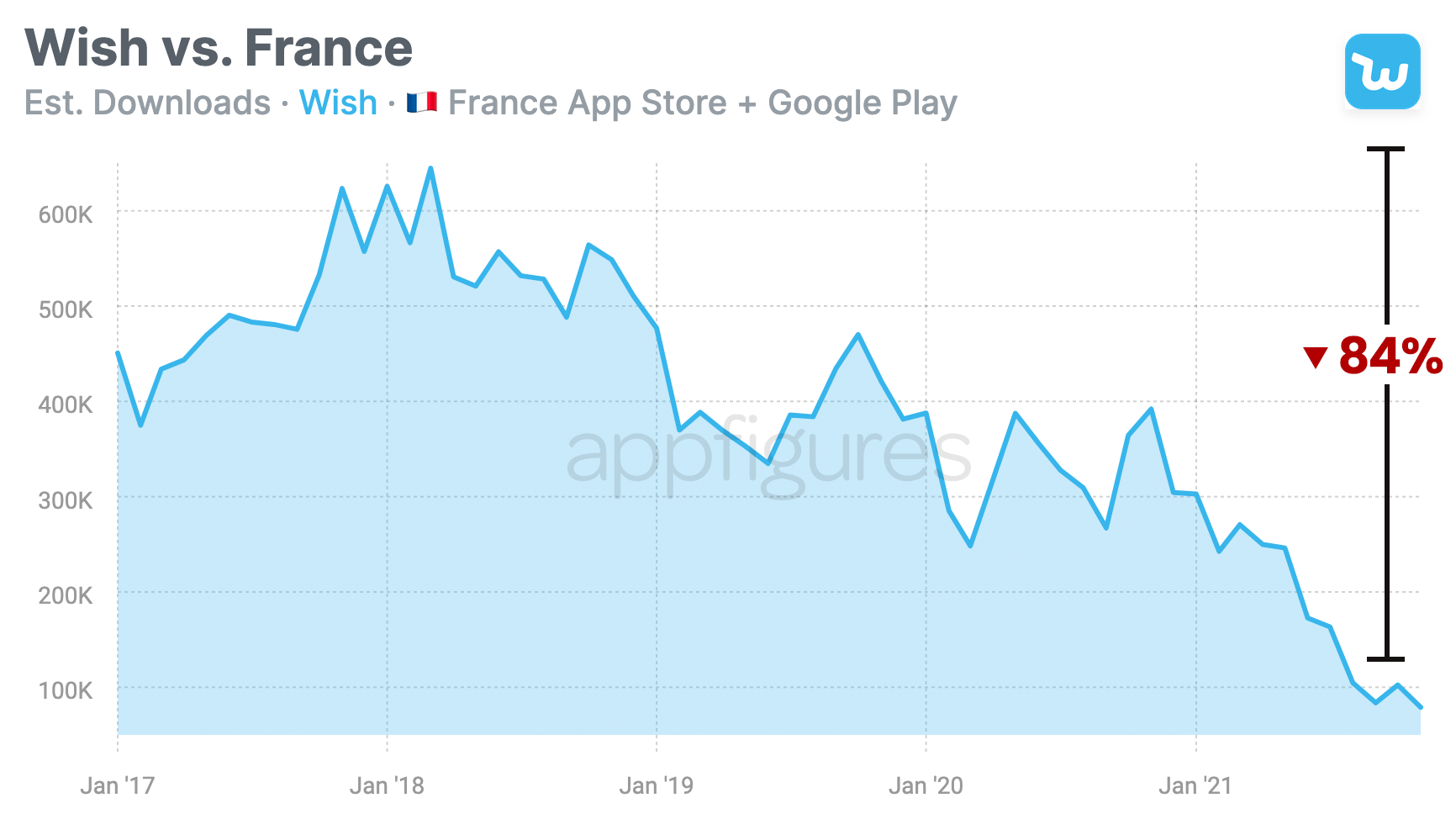 I was curious to see how big Wish is in France, so I turned to our App Intelligence to see how many new users it's getting every day in France. In the process, I saw an alarming trend in France that's also happening across the globe.

Downloads in France totaled 2 million so far in 2021, which may sound like a hefty number but compared to the same period last year, it's actually a drop of 44%. That's a big one!

As you can see in the chart above, this isn't new. Since the beginning of 2019, Wish has been losing traction at a pretty rapid rate in France across iOS and Android devices. And the trend is very similar globally.

If you recall, Wish overtook Amazon in downloads at one point last year...

I suspect France isn't the last country to regular shopping, and personally, I think it's a great move to protect consumers. I m also starting to see a trend in how governments approach mobile and the internet. That's going to be an interesting one to follow.

What you need to know: French regulators want the Wish shopping app removed from the App Store and Google Play in France because it's cheating customers by selling knock-offs. Wish has been losing momentum for quite a while. In the last year, downloads in France have shrunk ?? month over month, and XX% globally.

Okay, just one more, I promise. Unlike WIsh, Etsy has had a magnificent year in mobile. 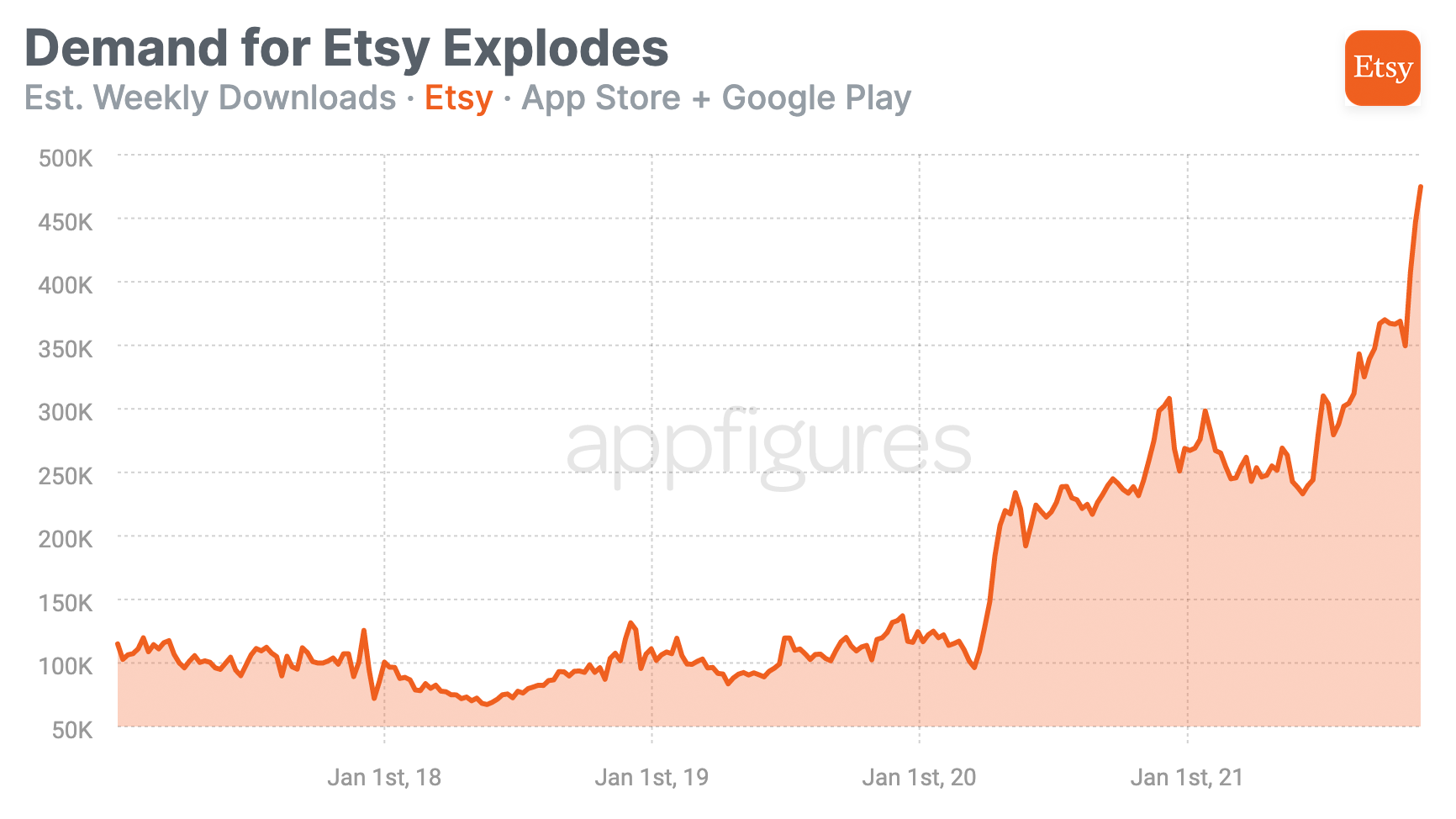 Weekly downloads last week were the highest the (mostly) handcraft marketplace saw, clocking in 475,000 new users. The week prior, which was the previous best week ever for Etsy, added 447,000 new users, and the week before added 407,000.

The pandemic certainly helped make Etsy into more of a household name. Between shortages making it impossible to get things on Amazon and the need for more custom stuff, like face masks, Etsy has gained more momentum across the board. That's good news for sellers, buyers, and Esty.

What you need to know: Etsy has had record-breaking weeks in terms of downloads for 15 consecutive weeks now. The latest record, last week, earned the handcraft marketplace 475,000 new users.

Done with shopping and on to... Streamers!

Guess who had the best month of revenue ever? If you read the title, you'll know it's Disney+. But even if you didnt, it wouldn't be too hard to guess. 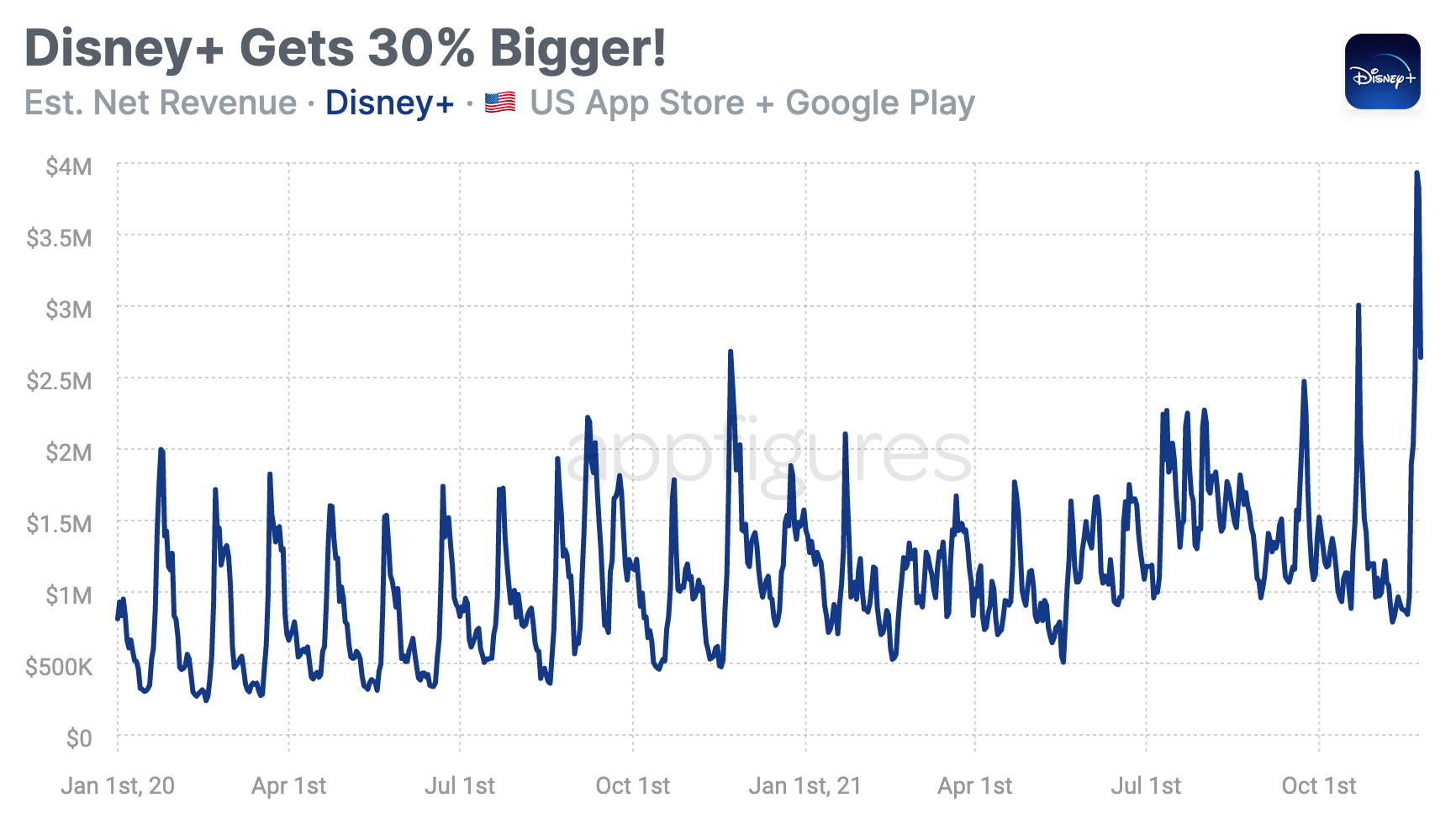 According to our estimates, single-day net revenue in the US hit a new all-time high of $3.9 on 11/22 across the App Store and Google Play. New exclusives like Hawkeye and a new Beatles documentary + a long weekend made finally subscribing to Disney+ a no-brainer for many.

Another important thing to look at here is just how big of a jump this is. The last high for Disney+, which came in at the end of October, earned the company $3 million of net revenue in a single day in the US. The new high is a 30% increase in net revenue.

The streaming game is mega hot and hasn't cooled down in as long as COVID has been around to change the world. Disney noticed.

4. This Archaic Category of Apps is Making a TON of Money!

I get asked what's the best app to make to earn money is, and my answer is usually something along the lines of "you can succeed with most apps, so build what you want to build."

There's a category of apps most people don't even think about, and I'm pretty sure no one really wants to build, but they do it for the money. Can you guess what that type of app is? 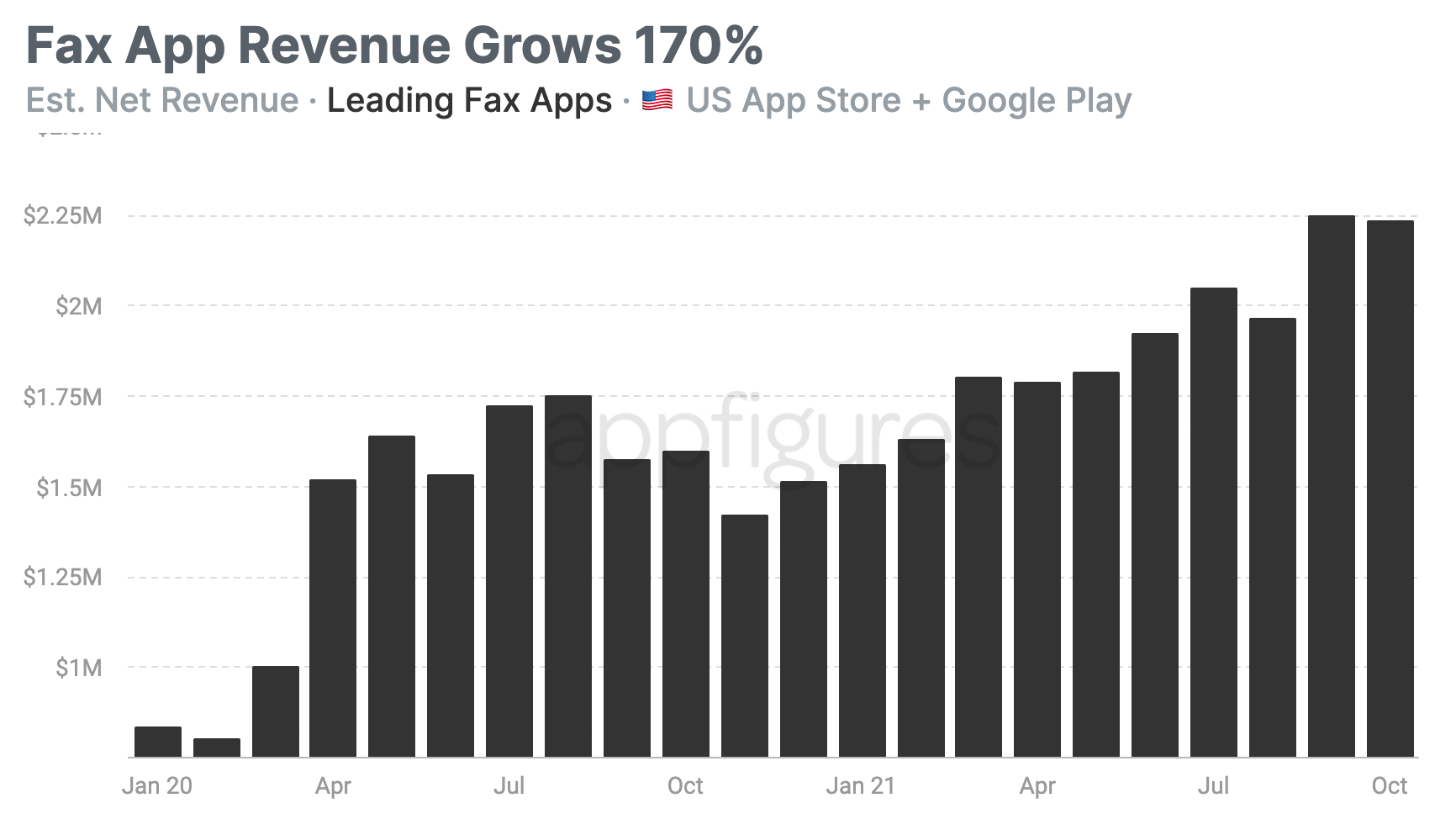 Fax apps, used to send and receive faxes (is that how it's even said?)

And for those thinking, "what's a fax???", it's the IRL version of email, and it required real paper.

According to Explorer, there are 412 apps that provide the ability to send/receive documents sent by fax on the App Store and Google Play right now.

In October, we estimates that the group earned $2.4 million in net revenue in the US alone! Yup, that's multiple, with an M, millions, also with an M, and in a single month, coincidentally, also an M.

To those who say all the opporutnities are gone by now I serve this as an example that you're flat out wrong. You just have to know where to look, and that's why App Intelligence is som important (also we make it super affordable!)

5. Can MrBeast Be as Big on Mobile as He Is on YouTube?

Did you know MrBeast has a mobile app?

In case you're not sure who that is, MrBeast is a YouTuber that gives people money for playing games. Oh, he's also one of the most popular channels on YouTube right now.

But earlier this year, MrBeast got into the app game and it's not for doing what he's known for -- He's selling hamburgers (and chicken, and other fast food that looks pretty delicious). 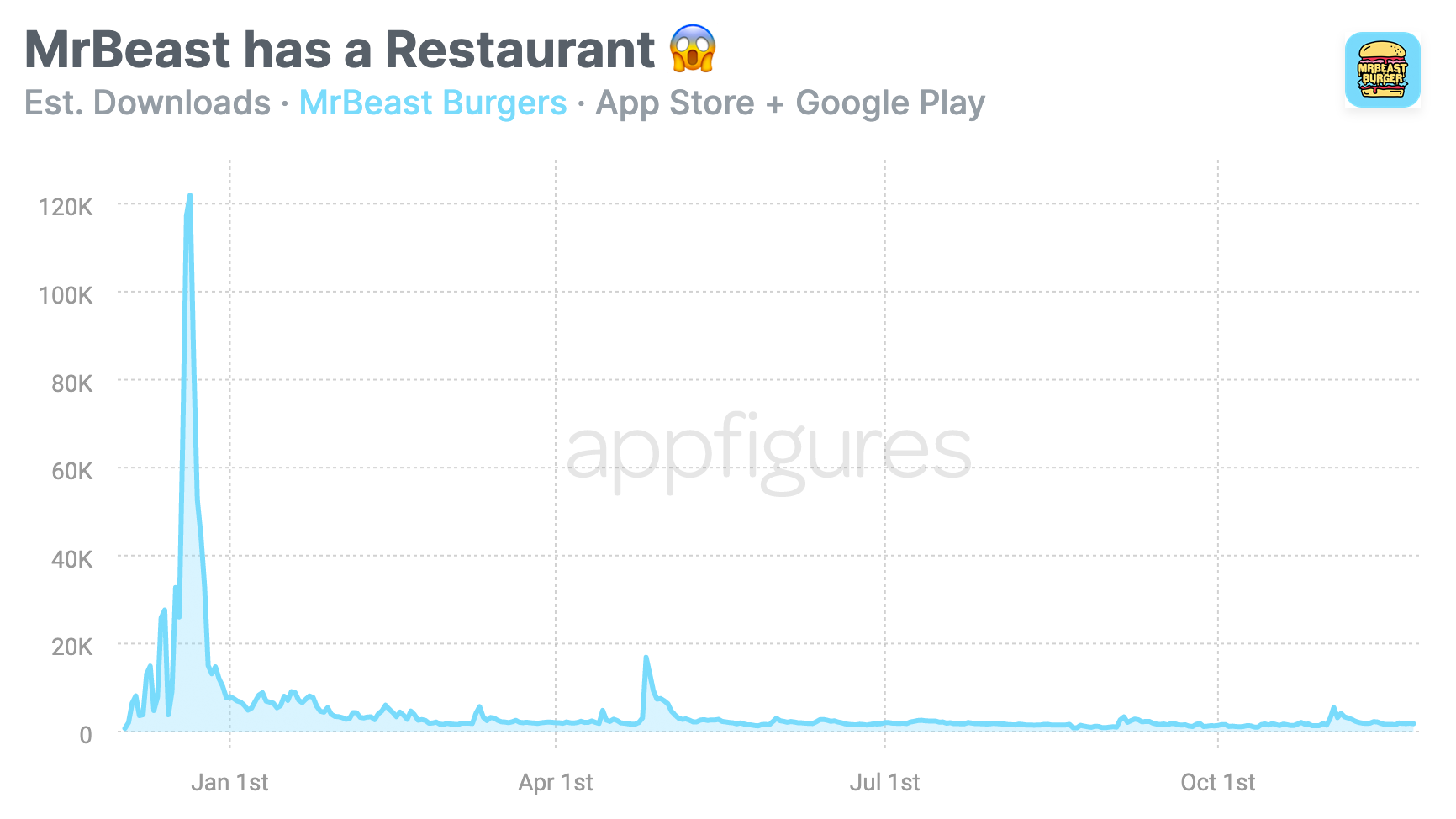 That's right. A YouTuber is now the owner of a restaurant chain. But! There are no physical restaurants... This is a "virtual" restaurant that uses local restaurants and 3rd party delivery services. And that sort of unique hybrid approach allows users of the MrBeast Burger app to order food in a bunch of cities and countries all over the globe.

If you've been following the newsletter, you've seen how hot the race for food delivery is. MrBeast's approach of not competing but leveraging is super clever. Super!

Since launching in December of 2020, MrBeast Burger was downloaded 1.8 million times from the App Store and Google Play globally, according to our estimates. The majority came in just around launch time when downloads hit 122,000 in a single day.

It's since slowed down a lot and is now averaging about 1,500 downloads a day globally, according to our estimates.

But... MrBeast has many millions of subscribers to his channel. It won't take much to bring this number back up, and probably higher. I'll keep an eye out for that.

What you need to know: Popular YouTuber MrBeast has a mobile app for his virtual restaurant chain. The app was downloaded by 1.8 million people so far, according to our App Intelligence and is getting 1,500 new downloads every month on average.