This means a lot of developers are going to have a rough weekend, and developers who monetize with subscriptions will have it even worse.

I looked at our app intelligence for the top 200 apps and games in Russia over time to get an idea, and here is the last (almost) year in net revenue estimates: 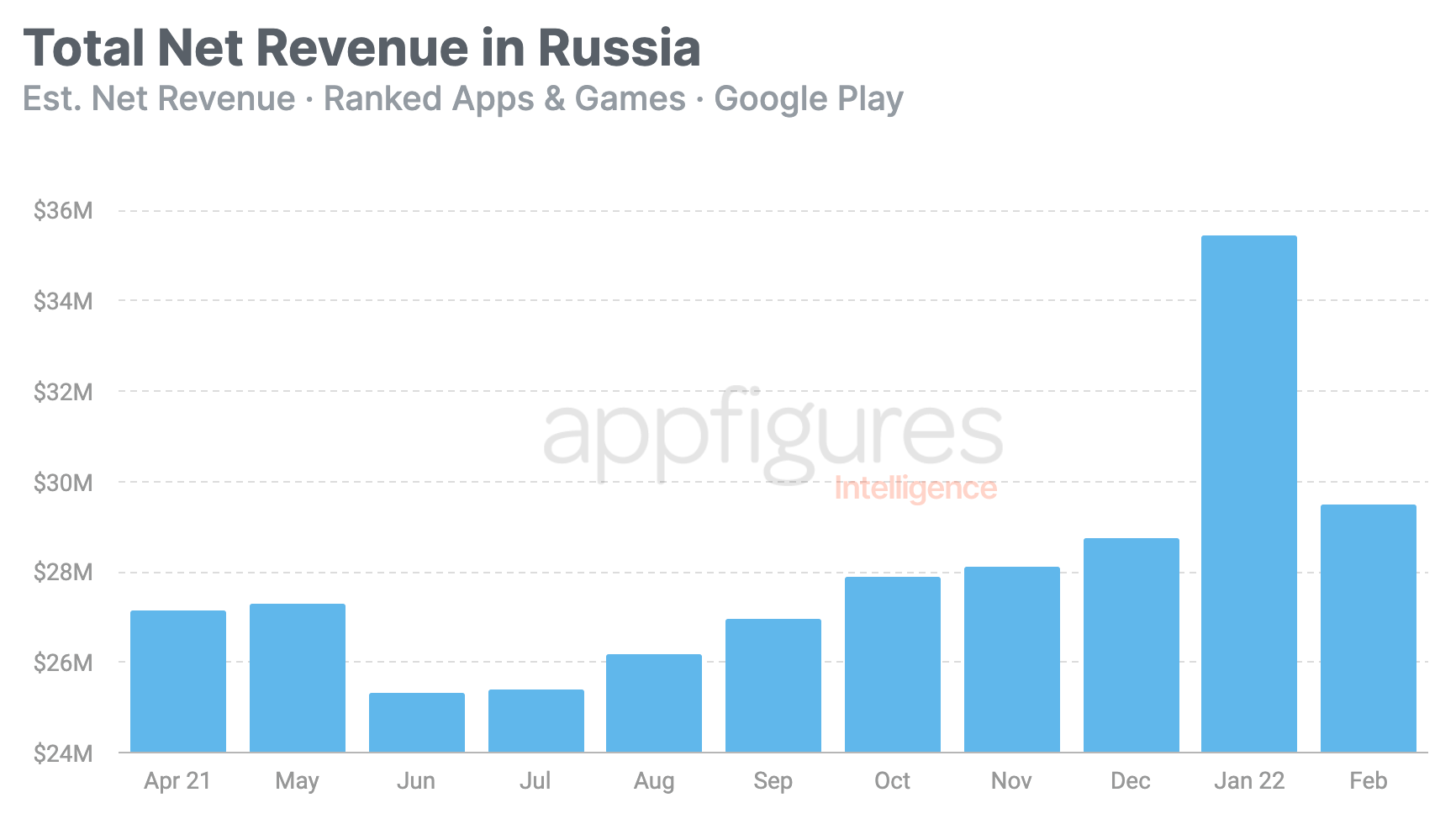 Based on our estimates from the last few months, if this pause continues for one whole month, top developers will lose at least $30M of net revenue from Google Play for every month of thise pause. That includes revenue from paid app downloads, the few that still exist, in-app purchases, and recurring subscriptions.

I foresee subscriptions taking a serious hit and also the longest to recover unless Google does something special with those cancelled subscriptions.

This number felt serious enough that I was curious how it compared to other countries, so I added up those 11 months for all countries we provide estimates on (which includes all major ones), and here's how Russia ranks: 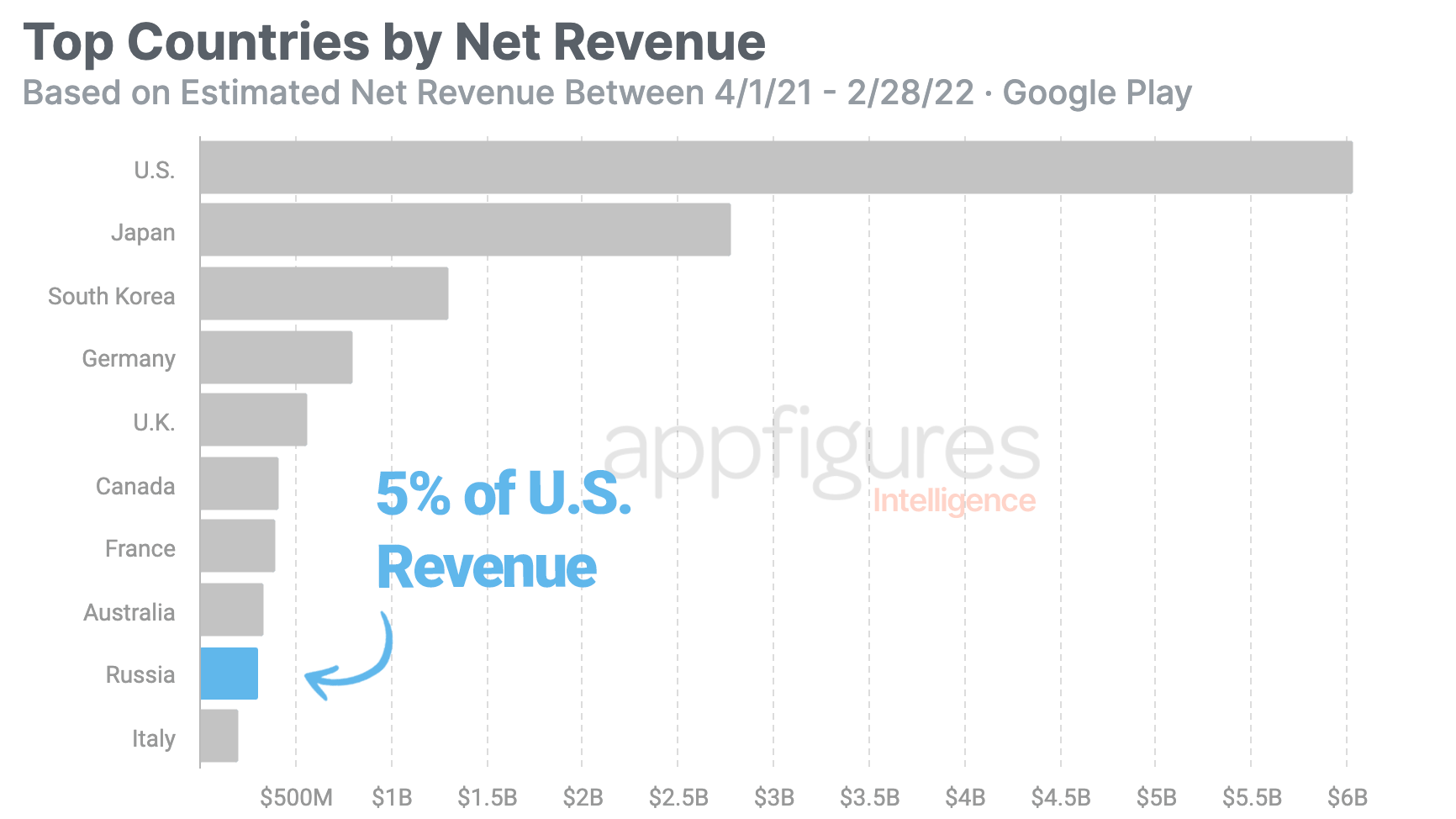 According to our estimates, Russia is 9th in terms of net revenue for the top 200 apps and games for the 11 month period, with $308M in net revenue from Google Play. Although 9th, Russia's revenue is pretty far off when compared to the top top countries.

So, while this will have an impact on many developers, it's likely to not be that big.

2. Did Someone Forget To Turn Off Ads for Talking Ben the Dog?

I've been analyzing the top charts for Russia and the surrounding countries a lot this week, for obvious reasons, and although it's VPNs that command much of the downloads, there was a game that I kept coming across. 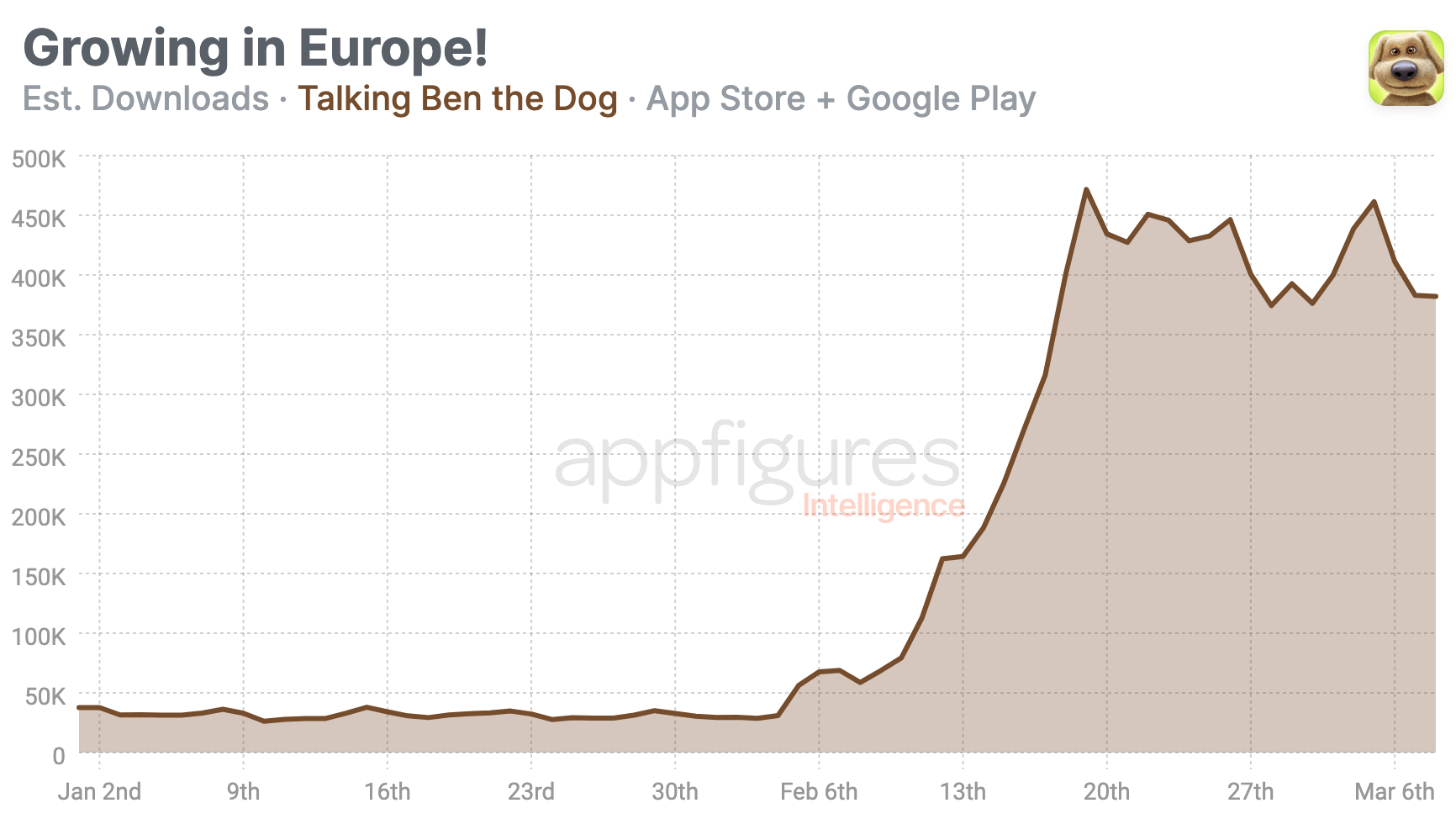 Talking Ben the Dog is currently #7 on the App Store in Russia and #2 on Google Play. That's right, among apps to circumvent censorship, stay connected, and make payments is a game about a dog that's a retired chemistry professor.

The game is in the top 10 in 6 countries, including Russia and Belarus, and top 25 in 12 more, which include the US, UK, and Ukraine.

So, why is it there? It could be that it's a go-to game in times of uncertainty. Looking at downloads, however, we can see a big wave rising pre-invasion, which more likely means an ad campaign that's still running.

We estimate that since the beginning of February, when downloads started growing, Talking Ben the Dog saw 10M new downloads. That's right, Million. It peaked at 471K on 2/19, which marks an increase of 1,470% from a few weeks before.

Side note, looking at revenue, this isn't the kind of ROI positive campaign advertisers look for.

Gas prices have been on the rise in recent months, and the situation in Russia has pushed prices even higher.

The hike in prices led hundreds of thousands of drivers right to their... phones! 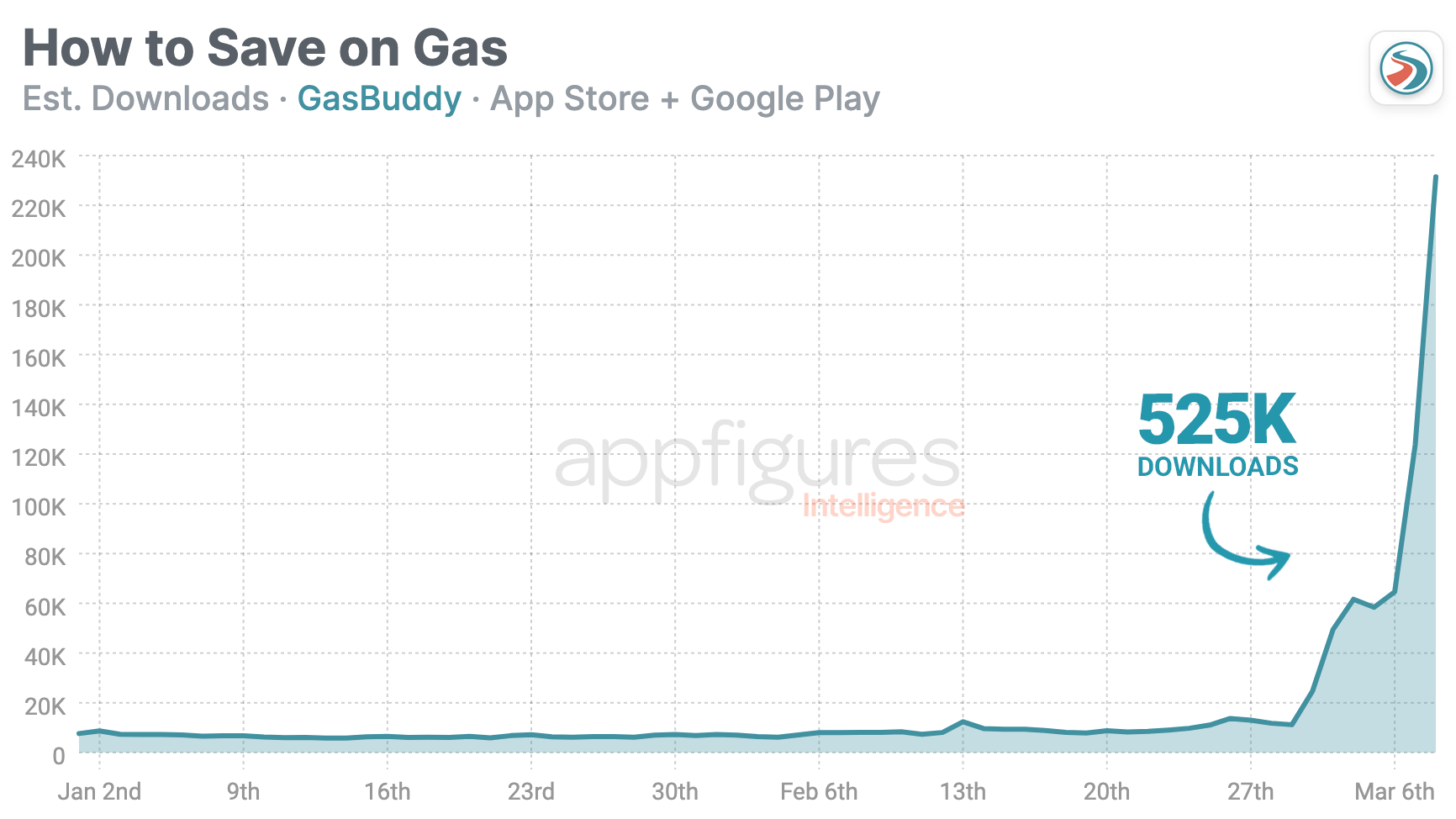 Downloads of GasBuddy, a service that compares gas prices from different stations in your area so you can find the best price, jumped this week to the highest they've ever been, going from an average of 5K per day to 232K on Tuesday, according to our estimates.

The App Store was responsible for about 70% of those downloads on Tuesday and Google Play for the rest.

We saw something similar happen in May after hackers took over an important gas line, which drained many gas stations on the east coast. But that spike, which peaked at 172K downloads in a single day, is still a whole 34% lower.

Over the weekend, I spotted an app I don't normally see in the top-grossing list, or really, much at all. That's Bleacher Report, a sports news app that also creates its own PPV (Pay Per View) content. 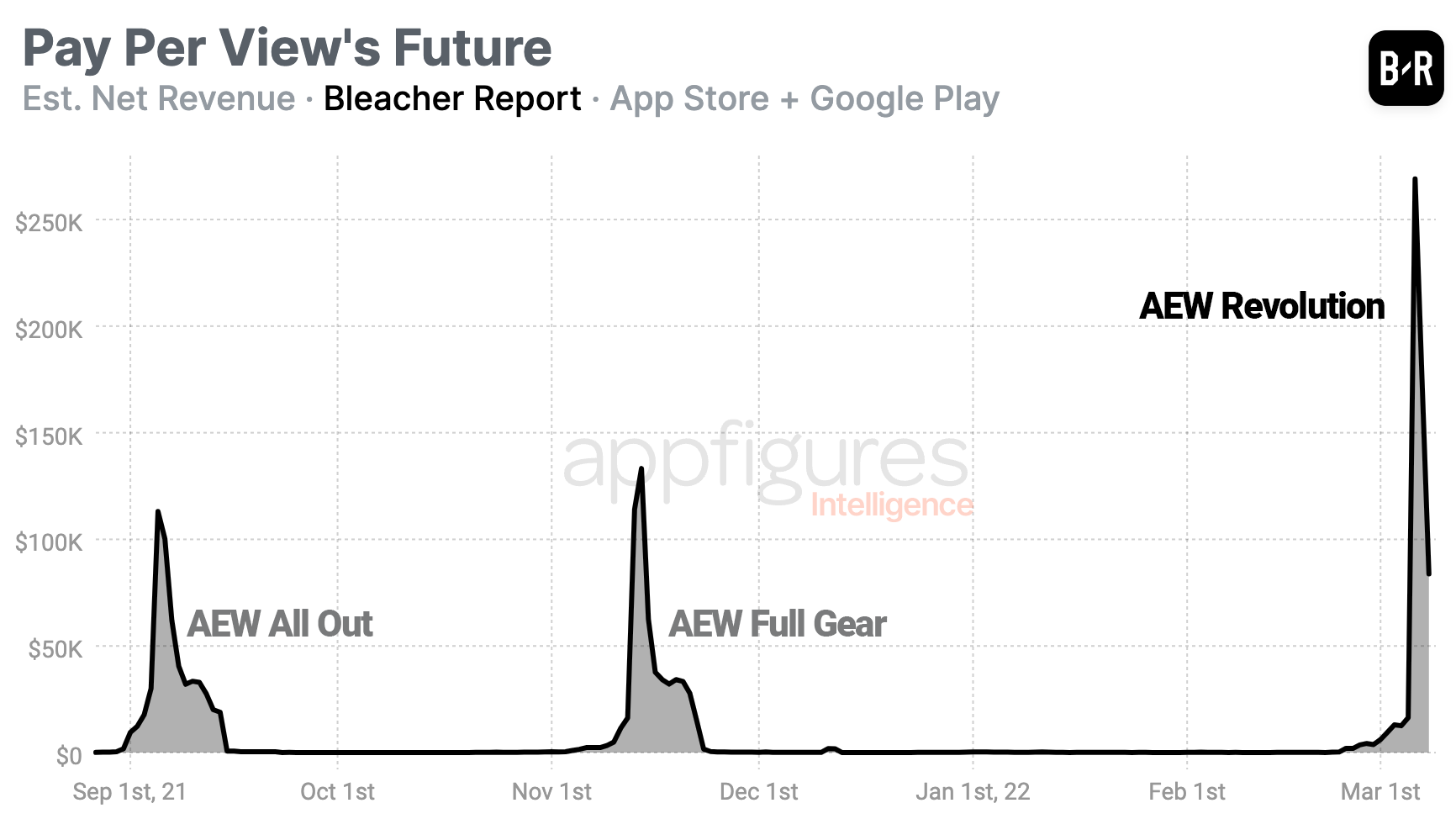 B/R's last peak was last year, where it added $133K of net revenue in a single day, and that was the previous episode of AEW.

Curious how many viewers got the PPV last week? We know the price of the in-app purchase + we know what a normal day looks like in revenue, so we can simply divide, and when we do, we get 14.1K viewers.

Streaming + sports is slowly becoming the winning combination that has more potential than cable. In the long term.

5. The Highest Earning Apps in February

This week I crunched the numbers to rank the highest-earning apps in the US. I'll be looking at games next week. 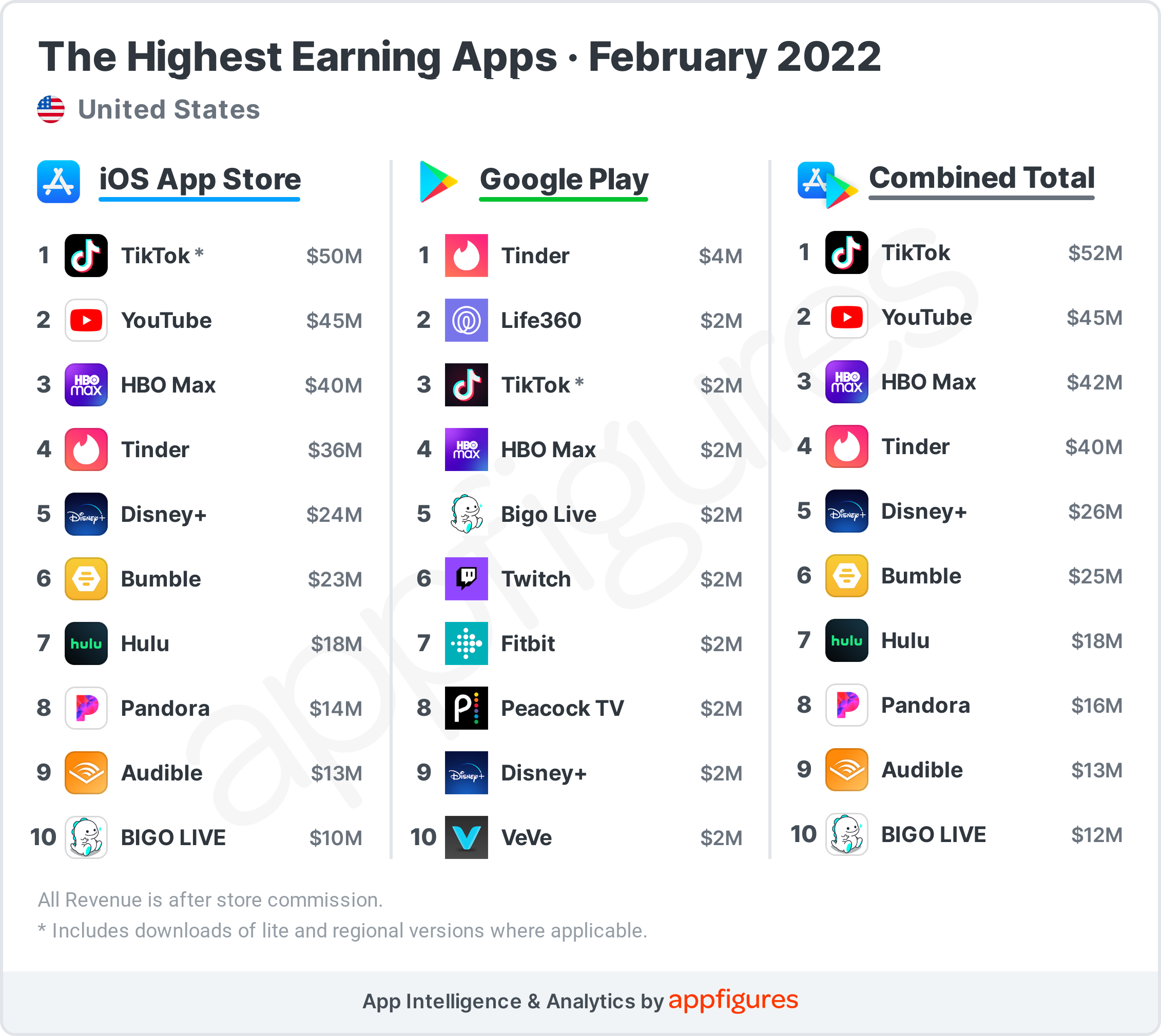 To the untrained eye, this list is almost identical to last month's, and that's because it is. But there's one app that is important to look at, and that's Veve, a marketplace for NFTs that's been picking up steam over the last few months.

More on that in a bit!

TikTok was the highest-earning app in the US in February, bringing in $52M of net revenue, according to our estimates. Video rival YouTube took second place with an estimated $45M of net revenue in February. By the way, did you know I have a YouTube channel? Check it out.

FYI - These numbers are a good bit lower than January because February is three days shorter, and for these top apps, three days means a lot of money.

TikTok wasn't the highest-earning app on Google Play. Tinder beat it by a mile (actually, two). Our estimates show Tinder with $4M of net revenue and TikTok with $2M.

Back to NFTs! If I can bring your attention to the last spot on Google Play. Veve is a new name in the context of the highest earners (except for this one time). It snuck into the highest earners list in January, but I was sure it was a fluke. Seeing it again here is a sign it isn't.

NFTs are still not mainstream, but this sort of growth in demand suggests that's changing.

Together, the top 10 highest earning apps in the US earned $288M of net revenue in February. A bunch less than January, if you're comparing. I want to blame it on the shorter month, but that's not entirely it. February is normally a smaller month in terms of revenue, a trend that, as a developer, you just have to prepare for.