Streaming apps have been all the rage on the App Store in the last year. So much that in every season of ASO Teardowns, we covered at least one streaming app (S1: Hulu, S2: Pluto TV). In this ASO Teardown, we're going to look at a streaming provider that's got a pretty solid catalog but is somewhat of an underdog. Amazon Prime Video.

Amazon Prime Video by the Numbers

Here's how Amazon Prime Video is performing in the U.S. App Store, based on our Competitor Intelligence:

Another Year of Growth 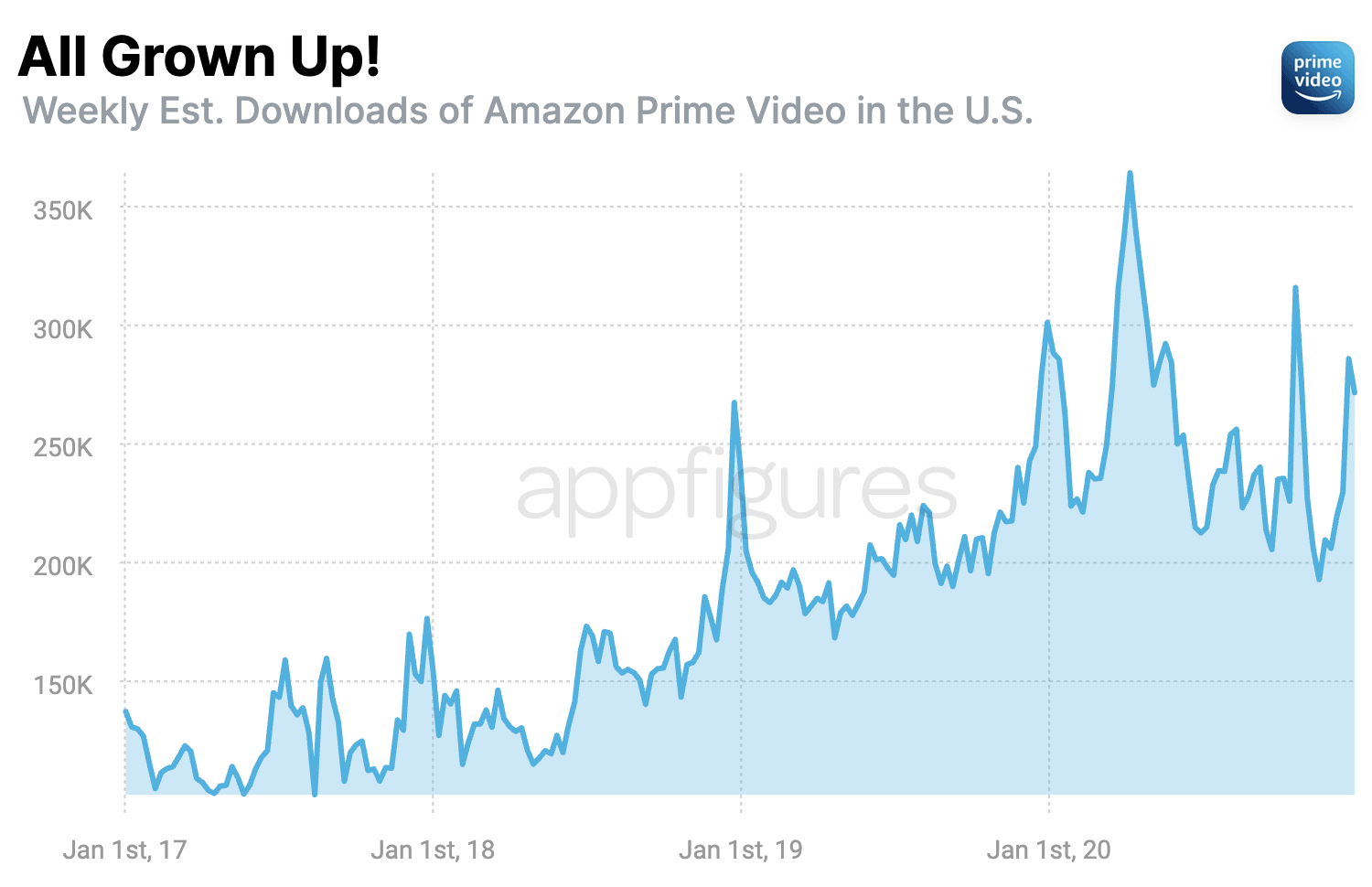 Amazon Prime Video's downloads grew 30% year over year in 2020, which is even better than the 25% growth it saw in 2019. Nationwide lockdowns and WFH have pushed demand for streaming apps, which Amazon has enjoyed.

A million new downloads in a month is a very impressive number for any app. But, the competition has also benefited from this spike in demand and grew as well. Compared to other similar providers, those downloads put Amazon Prime Video in the (almost) last place in its group.

I don't think Amazon's catalog of movies is to blame. 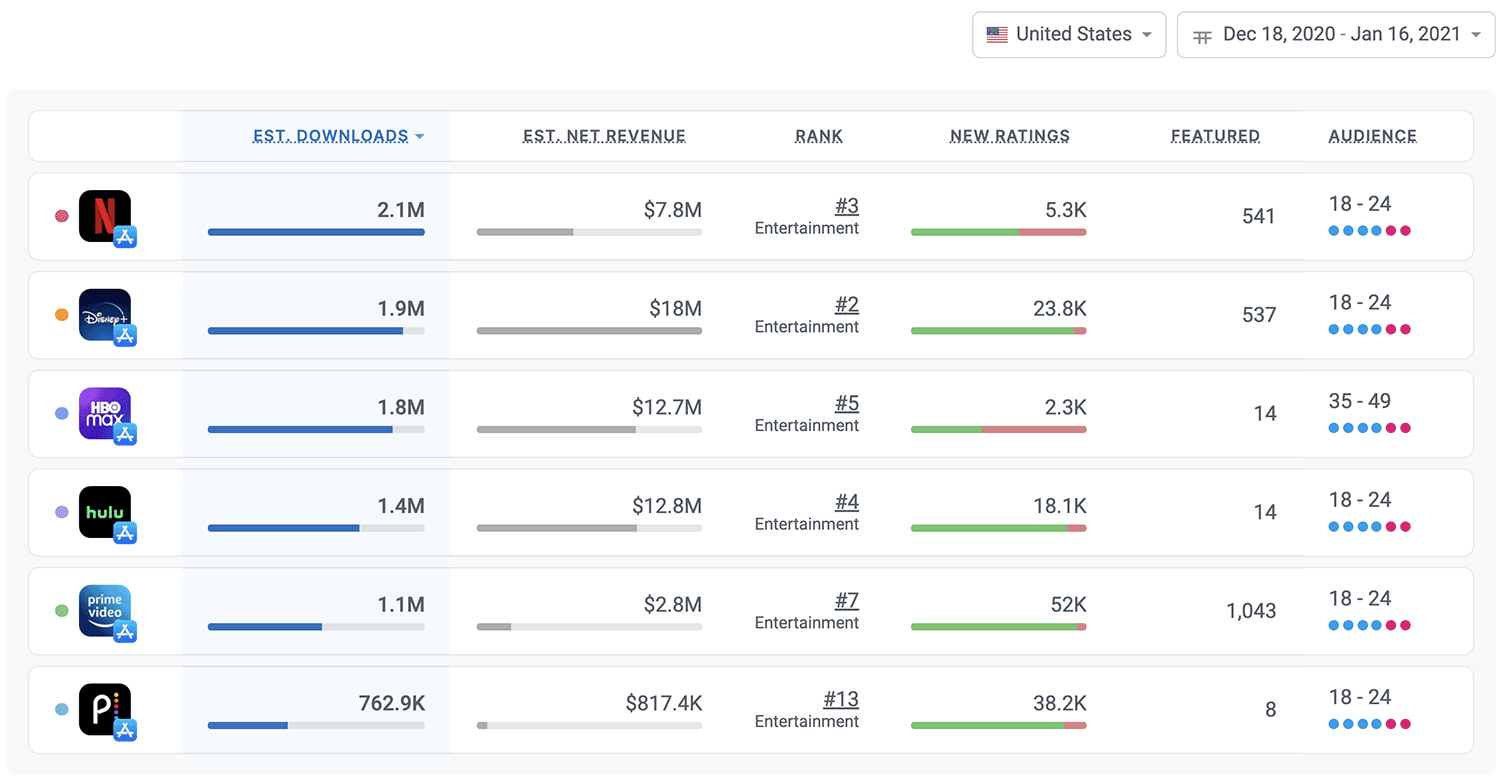 While in-store organic optimization is probably not the only reason Netflix and Disney are leading the charge, to get a download, you first need to be found, and that's an area Amazon needs some help with. Now you can start to see why Amazon Prime Video got a C+.

This is an important reminder that organic optimization is crucial for apps big and small, (almost) alike.

Let's kick off the analysis with the keywords Amazon Prime Video is using in its name and subtitle. Those send the strongest signals to the App Store's algorithm.

And this is how they're ranking for those keywords: 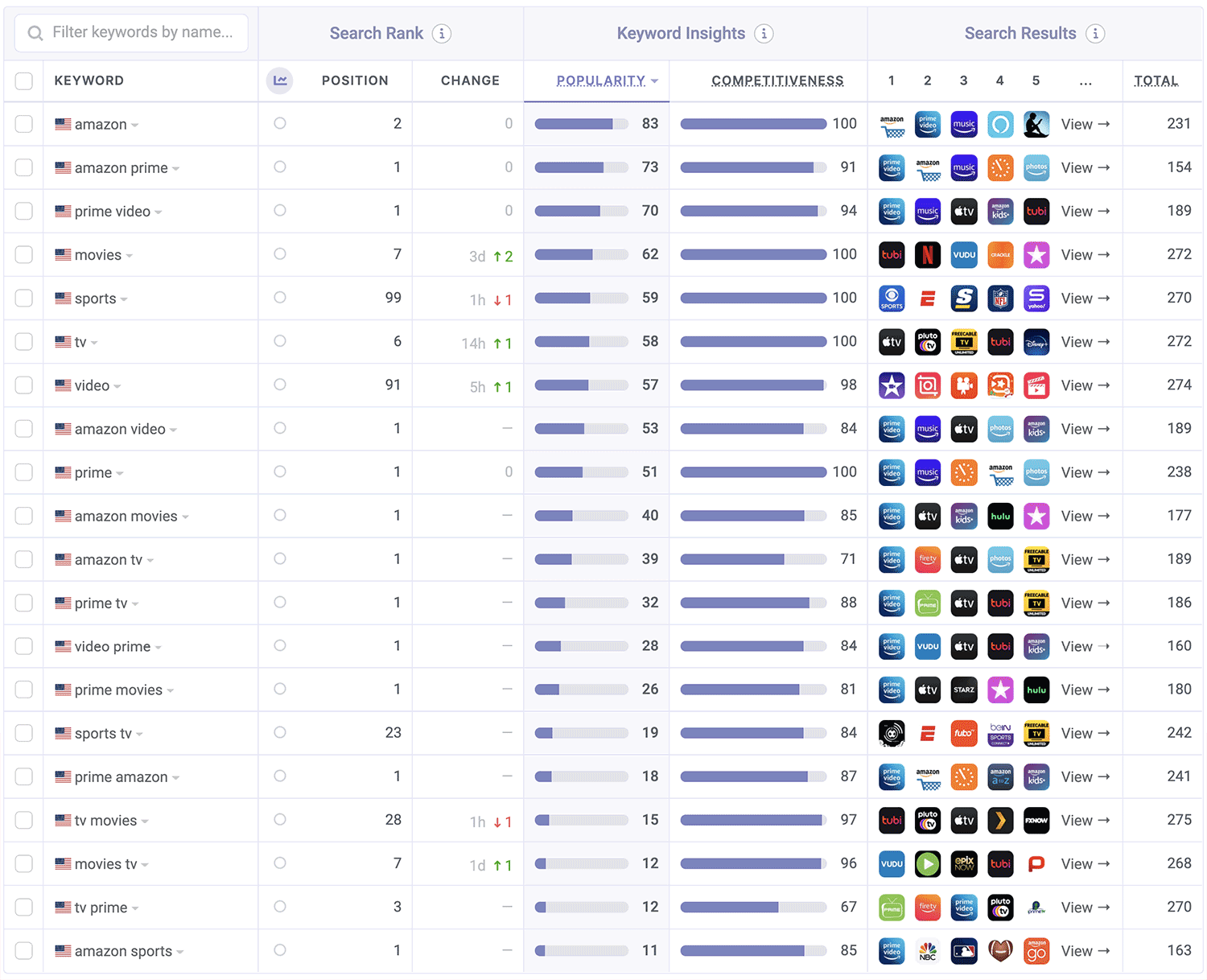 Amazon seems to be focused on branded keywords, and given the ubiquity of parent Amazon, it's no surprise some of those combinations are actually popular.

Overall, focusing only on the brand name isn't a terrible strategy, but if you're looking for new users, this isn't the best strategy either because it makes it easier for people already looking for your app to find it. People who aren't won't.

Given there's so much demand for this type of apps, that's a big missed opportunity and a major contributor to the overall low score Amazon gets.

A fairly basic set that's not terrible, again, but leaves a lot to be desired. The obvious issue here is, if you haven't guessed yet, not taking advantage of all 100 characters Apple offers. It's possible that the actual keyword list is simply unoptimized, and there's a lot of keyword waste.

Where Else is Amazon Prime Video Ranking?

This combo of name, subtitle, and keyword list gives Amazon Prime Video a bit more than just the name and subtitle alone. Here are some of the highlights: 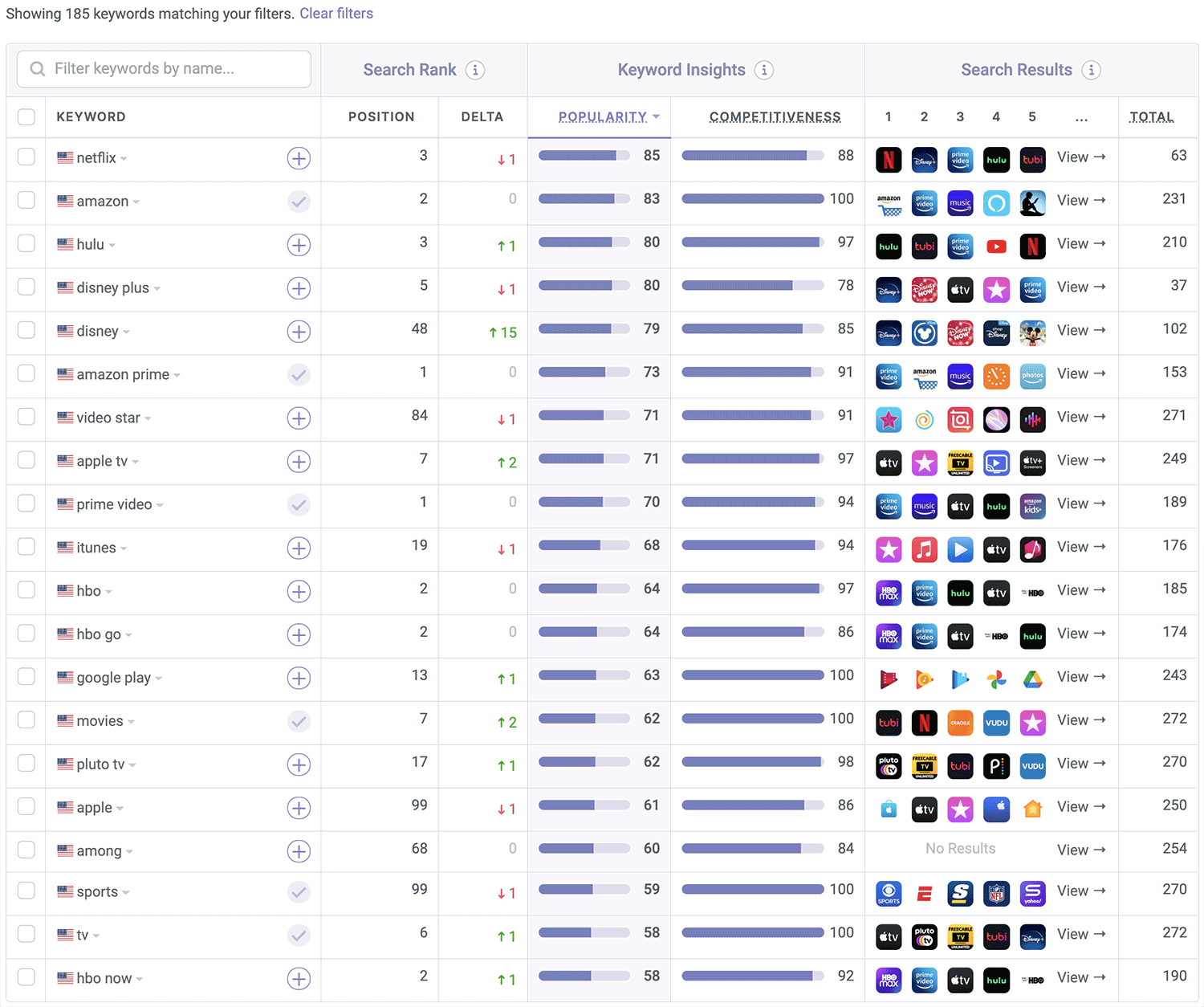 Again, a reminder that a brand, on its own, even if it's a mega-brand like Amazon, isn't enough to spark new organic discovery. 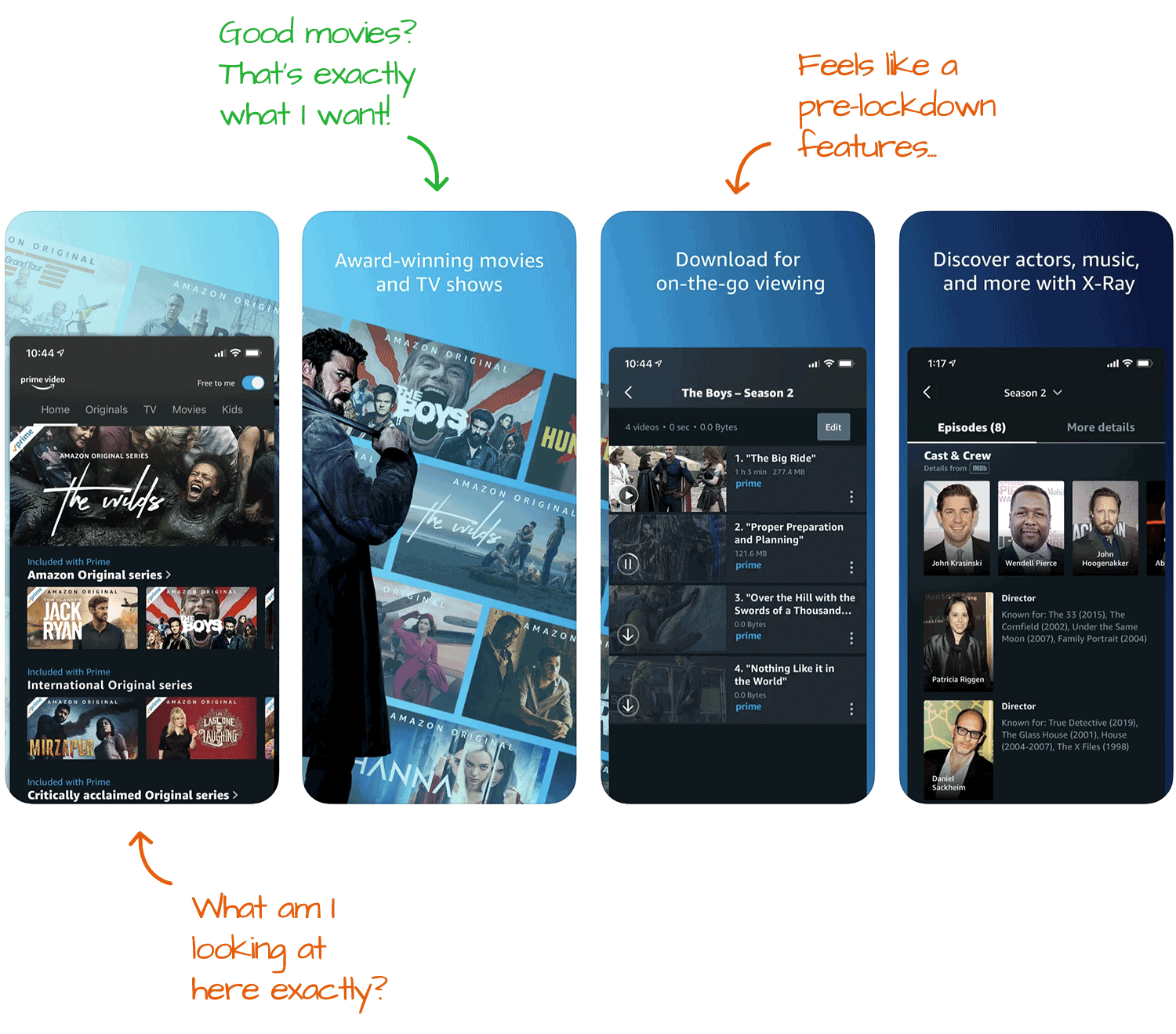 These screenshots have quite a few issues which are important to dissect and not repeat with your apps:

If you're making any of these mistakes, skim the conclusion and go redo them. There's enough here to correct almost every bad screenshot set I've seen so far, but if you want to learn more about creating the perfect set of screenshots, check out this in-depth guide.

Amazon Prime Video does not have a... video.

I'd pin this on Amazon as well, but it's actually par for the course. Disney+, Netflix, HBO Max, Hulu, Starz, and pretty much every other app it's competing with don't have an App Preview video either.

It's known that Apple's been a bit stricter lately, especially with the bigger apps, about App Preview videos. There's also the case of IP rights, which is probably more complicated than I even think it is in this case.

That said... I contend not even trying here is a mistake a company like Amazon shouldn't be okay with making.

As you probably noticed, I'm not in love with what's going on here.

Keywords that aren't optimized and screenshots that look like they were done last-minute make me think Amazon phoned home the metadata for this app, something their rivals took the time to plan out. Even though they're all mega brands. That's why those competitors are ahead.

For big brands, just like it is for indie apps, being found on the App Store requires effort. If you don't try, you won't succeed.

Luckily for Amazon, even a simple strategy is likely to show positive results very quickly because of the existing demand in the market.

Use the Tools I Use to Get Real Results!