iPhones come with a native notes app, which does a decent job at taking notes. If... you only have a note or two that you look at once in a while. For anything more demanding, you'll need something else.

I happen to be a heavy user of notes on my phone. I take notes in meetings, when I have ideas, to write articles (like this one), and most importantly, for my to-do lists.

In this teardown, I'm going to analyze the note app I use more than any other app on my phone: Bear.

Overall, Bear earns a C, and not because it's doing things wrong, but rather because it's not doing some things at all. That's an opportunity to learn.

Bear by the Numbers

Here's how Bear is performing in the U.S. App Store, based on our App Intelligence:

Bear won the coveted Apple Design Award back in 2017, which resulted in quite a few downloads. 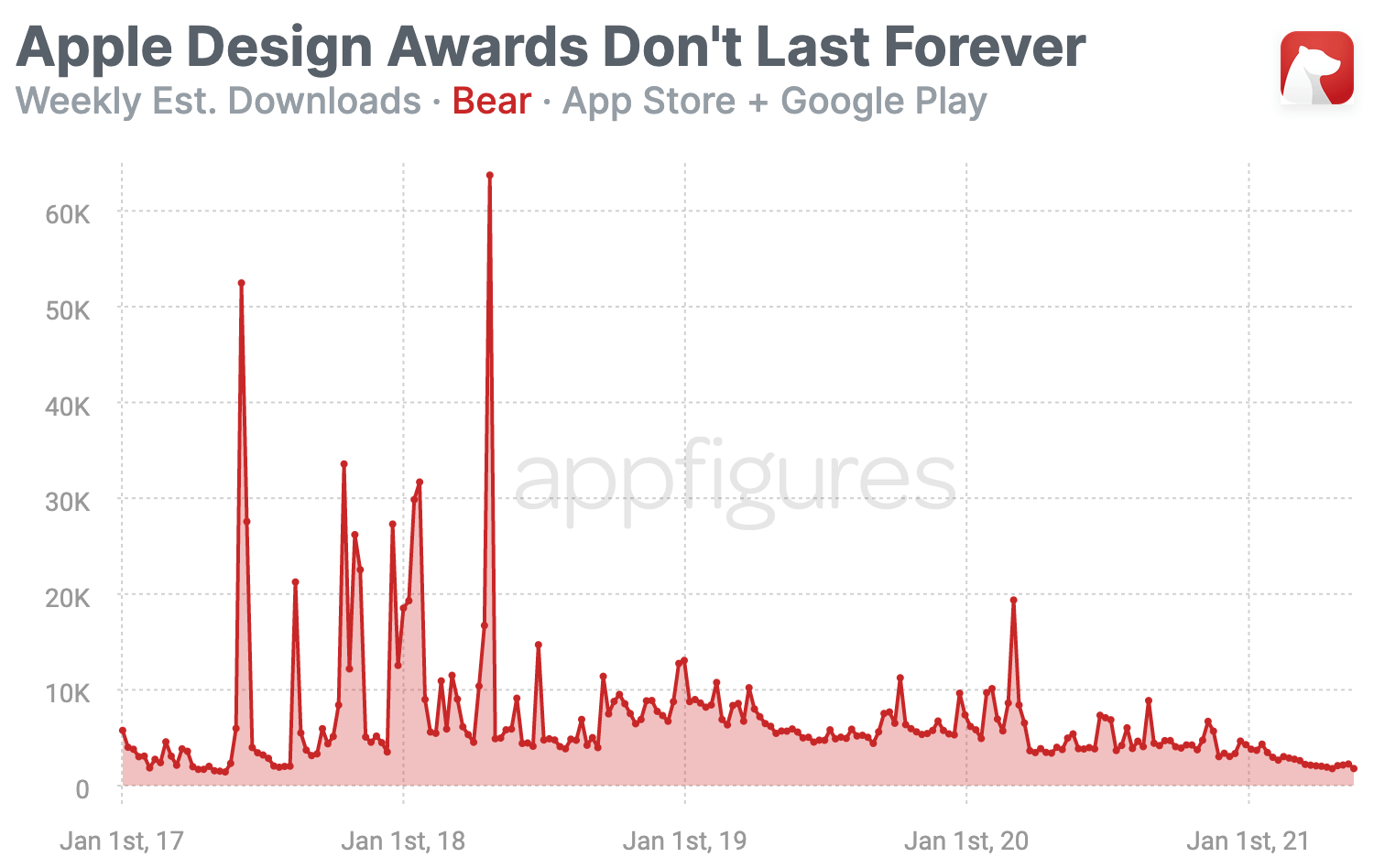 We estimate that between 2017 and 2018, Bear was downloaded nearly 900K times on iPhones across the globe. Those were the good years. Since, meaning between 2019 and May of 2021, downloads totaled just 700K, based on our estimates.

There's a good and a bad here. The good is that there was a good amount of potential off of the free promotion by Apple. The bad, however, is that this free publicity wasn't leveraged to establish strong organic growth (aka. ASO), and when it ended, so did the downloads.

Tiny lesson: When you have an opportunity, don't just sit there and watch it run out. Use it to establish a better foundation so it lasts longer.

Bear vs. the Competition

Competing with a native app that comes pre-installed isn't easy, but Apple isn't the only big name Bear is up against.

Microsoft, Google, and Evernote all want to make note-taking easy. Bear's downloads won't get it into this top 5, but it's not too far off that it should not compete with them. That's pretty good news!

How is Bear Found?

While Bear's name and subtitle aren't very optimized, as you'll see below, it has the advantage of having been around for quite a while, which means more opportunities to "teach" Apple's algorithm what the app is about. 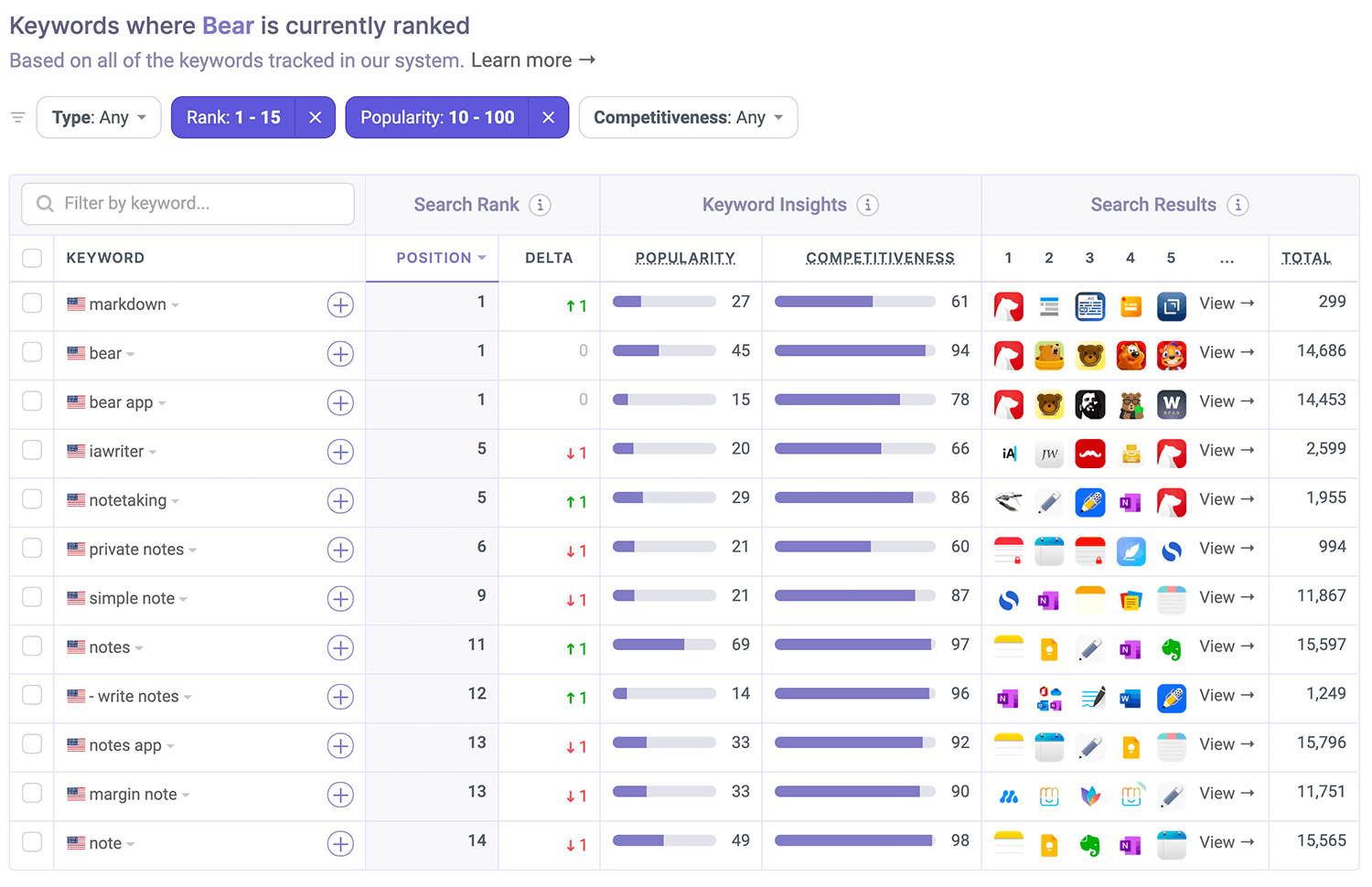 That helps a lot, but... when you teach Apple incorrectly, it learns incorrectly. In the case of Bear, the app ranks in a bunch of keywords, but many of them aren't popular. I filtered out the unpopular ones (popularity under 10), so you can see what that means, and it's not many keywords.

Let's dig in by looking at the keywords Bear is targeting in its name and subtitle. Those two send the strongest signals to the App Store's algorithm.

Hmm... something's missing here. I hope this one's obvious. Where are the keywords???

There are two big issues here that are hurting Bear's ability to get discovered and downloaded.

Here's the thing - if you came across an app by the name of "Bear" with an illustration of a bear for an icon, would you intuitively expect it to be a great note-taking app? Not really, unless you made it... That's how users who see the app feel, and Apple's algorithm.

Easy fix #1: Place relevant and popular keywords in your app's name. Leaving it "pure" deprives the algorithm, and users, of hints to understand how the app can help.

When thinking of keywords to use in the name, think simple and popular. For Bear, I'd go with something along the lines of notes, note taking, and writing. If the team feels aggressive, I'd even play around with to do list right in the name.

But... while those could be popular searches, they aren't necessarily, and if you optimize for those, you're really tying your success to keywords that not enough people are actually using when searching the App Store, diminishing your ability to get more downloads.

Easy fix #2: Start with keywords that you think are a good fit, but let the data guide which keywords you end up using. With easy tools like Competitor Keywords and Related Keywords, you can easily find and refine your keyword list.

The best words to use in the subtitle are words that combine well with the ones in the name and produce relevant and popular terms. In this case, words like private, jump to mind as a natural extension.

🎓 How to Choose the Right Keywords for App Store Optimization 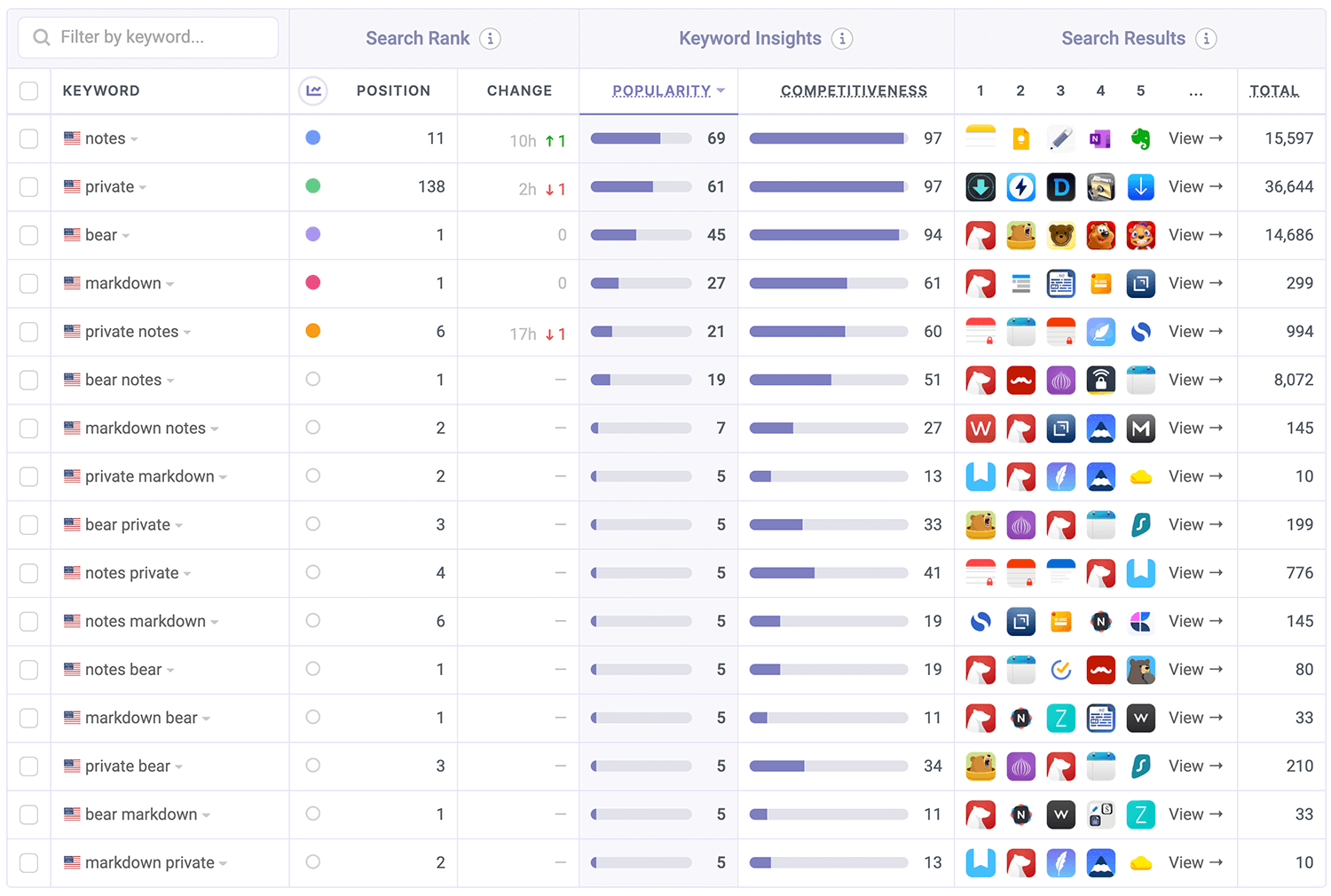 The name and title combine to very few useful options, so there isn't much to analyze here, which is why I kept the unpopular keywords, those with a popularity score of 5, in the screenshot. That should further reinforce #2 above.

After looking at a not-very-optimized name and subtitle, I'm happy to say the keyword list has some useful hints. They only help discovery a bit because they don't really pair up with the name, which is what the algorithm listens to the most.

It's easy to highlight features, which is what we see most of here. For the most part, that's not a bad idea. With a strong name/subtitle, that's the right move for the keyword list. Features, use-cases, and benefits are all things you want to target in your keyword list.

But, there's something else to keep in mind.

Easy fix #3: When competing with popular apps, it's better to select a small(er) number of keywords and focus on those instead of spreading the 100 characters the App Stores gives us on a random variety.

🎓 How to Optimize Your Keywords List in App Store Connect

Bear doesn't utilize an App Preview, which, as a user of the app, I think is a missed opportunity. The UI is clean and makes writing very easy, and when you need options, they're there. I'd show that in a short video to create excitement.

On to the screenshots, the one area where Bear is excelling. 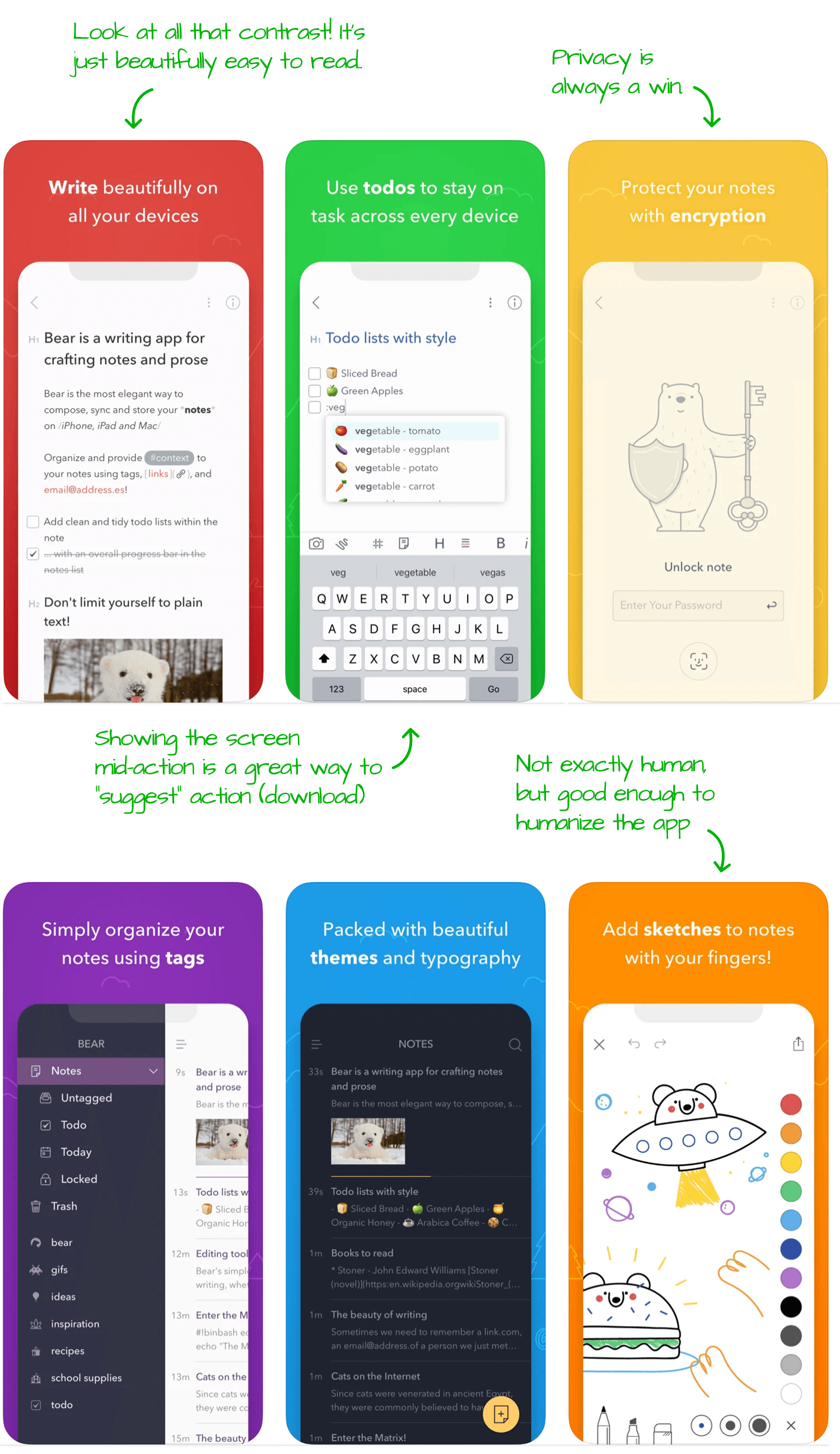 Colors, contrast, and relevant captions make these screenshots really "sell" the app. I really like them. If you're not sure what to do with your screenshots, check out our guide with best practices.

There's only one thing that can (and should) be improved here, and that's the number of screenshots. Bear uses 6 of its ten screenshots, which means it's wasting four opportunities to "sell" the app.

The reaction I get from most developers at this point is, "oh, I don't have anything else to say." That's rarely true, though.

The main reason I switched away from Apple's native Notes app is that it did a poor job syncing between devices. Although Bear's first screenshot insinuates it works well on all devices, there's no single screenshot that addresses my specific need.

Easy fix #4: Showcase more of what makes the app great in your screenshots and aim to use every possible opportunity (aka. screenshot) to give the user a reason to tap the get button.

What Data is Bear Collecting?

In this new(ish) section, we look at the privacy labels apps declare on the App Store. Bear is definitely collecting, but considering it's a free app, it's not too bad.

Yup, that's really all Bear is collecting, according to its privacy labels on the App Store.

You'll notice that this group, Data Not Linked to You, is one we don't see often in this section of our Teardowns, and that's simply because most developers rely on tools that collect information at the individual level and not aggregated.

"Tracking" has become a negative term, but if you've read any of my Teardowns you know that it doesn't have to be. There are many benefits to understanding how your app is being used which can help you fine-tune it, to the benefit of its users.

That's why I don't necessarily see tracking as a red flag. Just something to keep in mind.

Here are all the SDKs and APIs we see powering Bear:

Not a single commercial SDK in that stack! That's not too common, but a good reminder that apps can run completely natively on Apple's platform, supported only by a few open-source projects.

Ultimately, this does not have a direct impact on ASO or organic discovery, but the less bloat and unnecessary network traffic an app has, the faster and more stable it'll be. And that's good for users, which is good for the bottom line.

Bear is a great app that would benefit many if it showed up in more search results. I've outlined three fairly easy fixes that will take just a little bit of time to make and will have an immediate impact on visibility, and if done correctly, can lead to continuous growth. All, organically.

And remember, ASO is as much art as it is science, which really means both are needed to succeed.