When you think of dating apps, Tinder's the first that comes to mind, and rightfully so. Tinder's the most downloaded and most grossing dating app in the U.S. But close behind it is an app that does pretty much the same thing but with a twist.

Bumble, which was started by Tinder's ex VP of marketing, is all about swiping, it's just that the ladies have to kick things off. On the App Store, Bumble is giving Tinder a run for its money. Let's see how they do that.

Overall, Bumble earns an A-

Not so good: A bit too much experimenting, unfocused keyword list.

Bumble by the Numbers

Here's how Bumble is performing in the U.S. App Store, based on our App Intelligence:

Bumble has come a long way over the last few years. 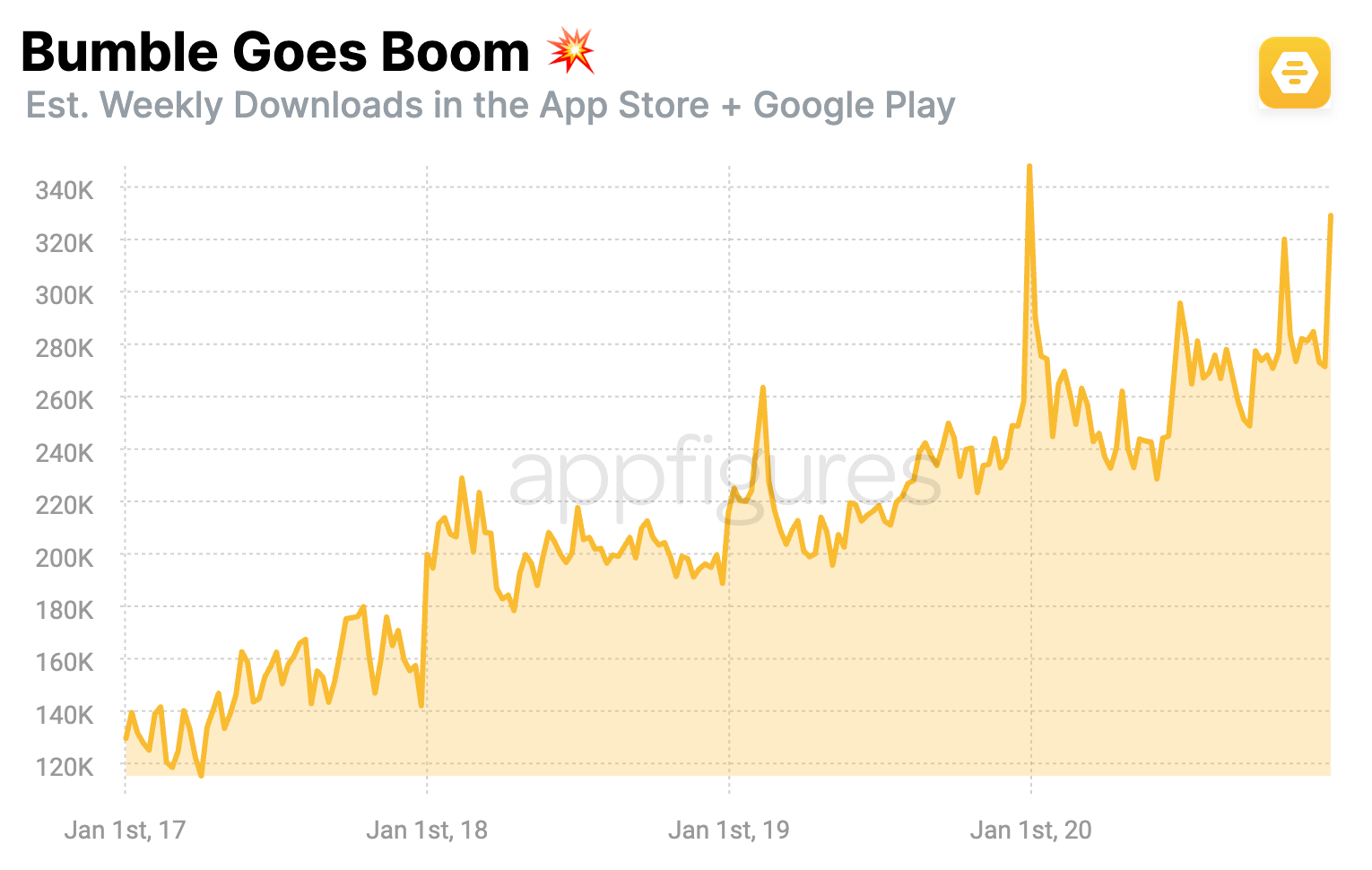 Since 2017, global downloads have tripled. According to our estimates, in 2020, Bumble hauled in 14M downloads globally across both platforms.

Roughly 50% of those downloads, or 7.5M, came from the U.S. in 2020. That's considerably higher than Tinder's 30% on iOS and around 10% on Android, indicating there's even more growth opportunity for Bumble internationally.

Although this teardown is focused on the U.S., the concepts apply to any country/language, and with these percentages could be extremely helpful as Bumble expands internationally.

Bumble's Vs. its ASO Competitors

Dating = Tinder, and that's tough competition. But Bumble's got its own twist and what looks like a busy ASO marketing team, which help it sit in #2. 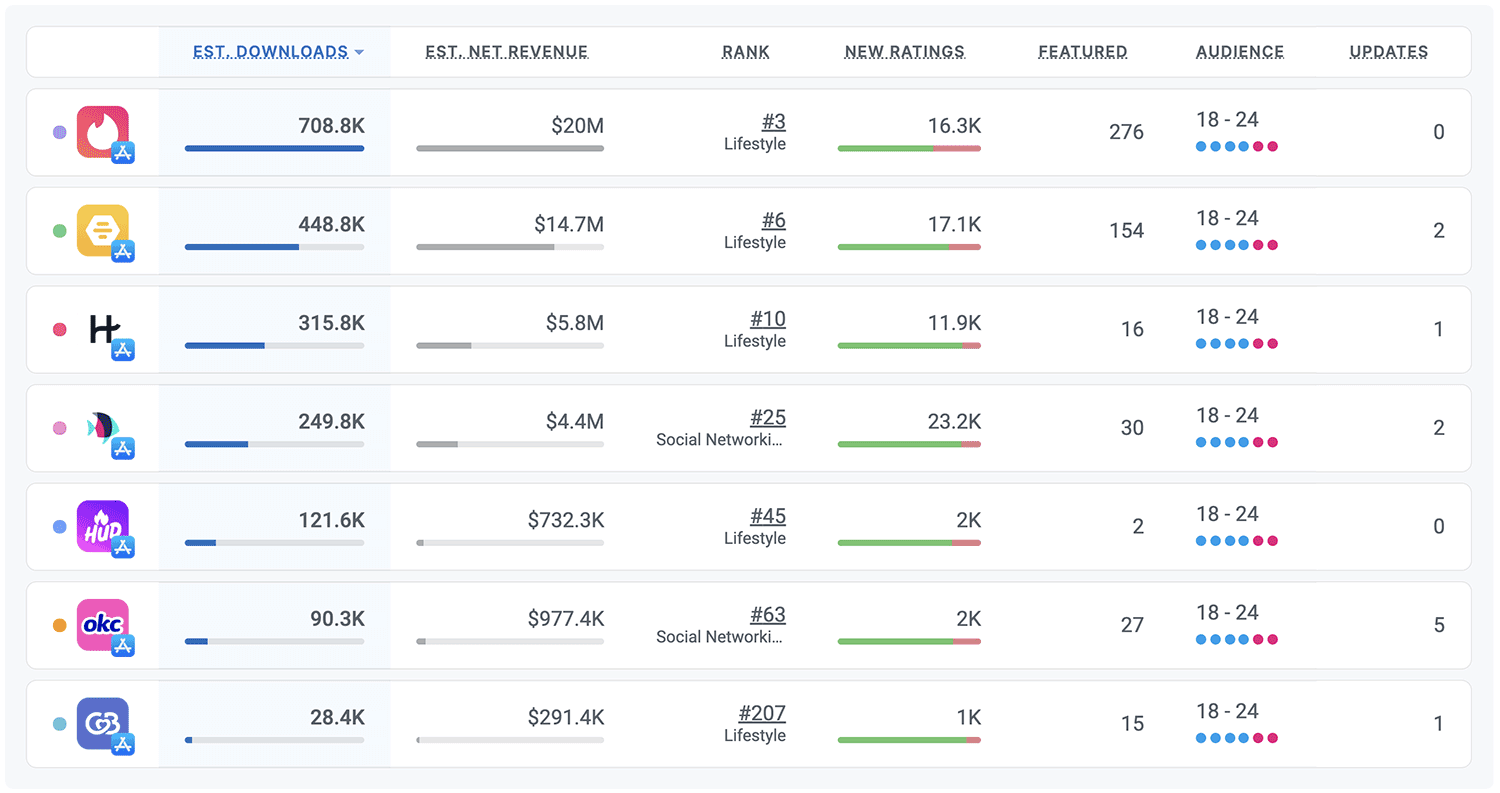 The race to join hearts is a fierce one. Tinder has a commanding lead in downloads, with Bumble and Hinge on its tail.

Interestingly enough, of the top 4 apps by downloads, three are owned by the same parent company. Bumble isn't one of them, and that's a lot to compete with.

Bumble is a Money Machine

Downloads are one thing, but revenue is the name of the game. Here, Bumble shows its twist isn't just a gimmick! 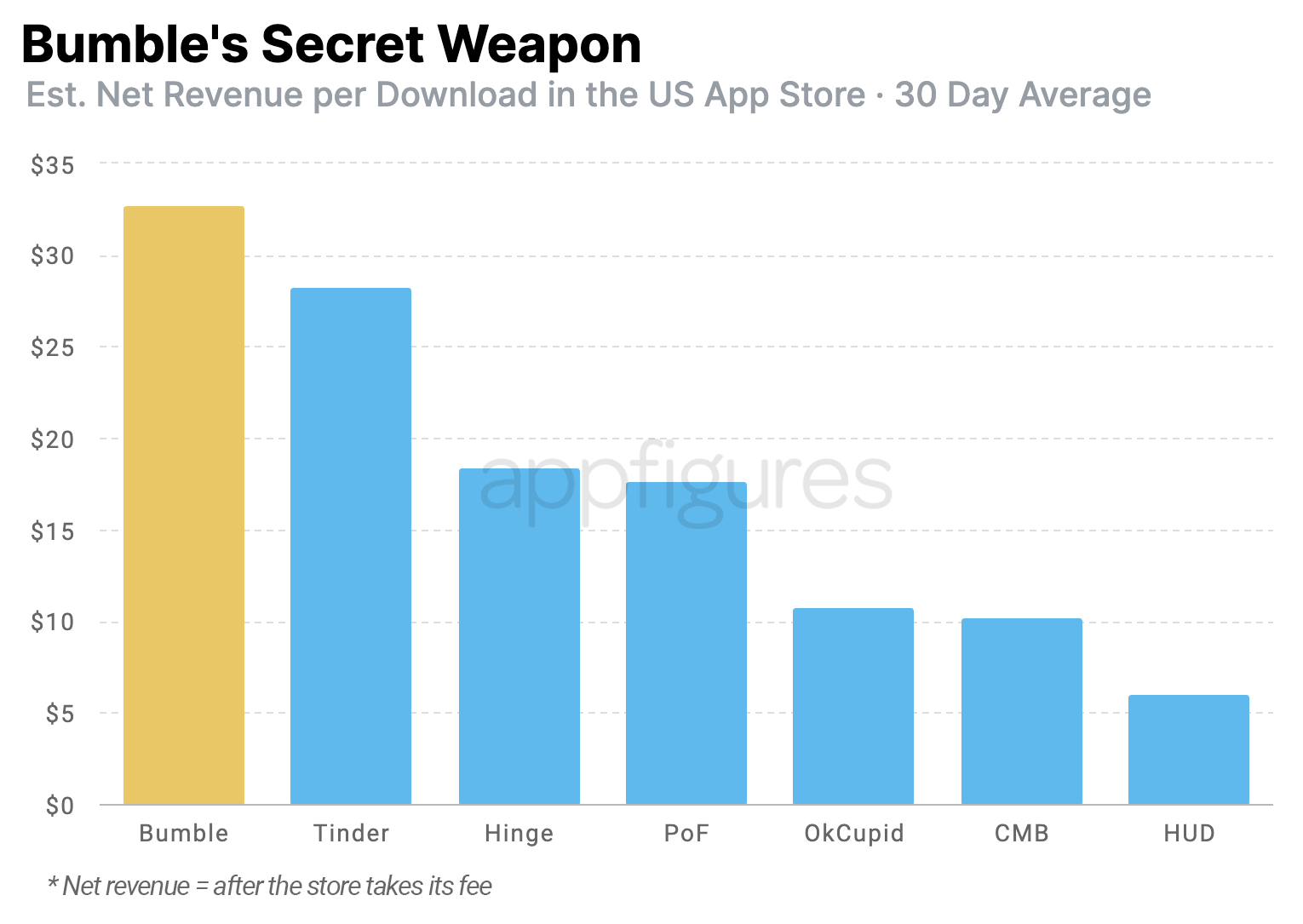 I like to look at downloads to net revenue to compare apps quickly. It's not super accurate because it doesn't take subscriptions into account, but given these apps technically sell churn, it's still relevant.

At $32.74/download, Bumble is doing something right. At 16% higher revenue-per-download than dating-king Tinder, Bumble's ability to monetize its users is really great. This means that matching Tinder's downloads will yield more revenue. And that organic growth has a huge upside.

Let's kick off the analysis with the keywords Bumble is using in its name and subtitle. Those send the strongest signals to the App Store's algorithm.

That doesn't read right. At all.

I get it, dating is pretty popular, and so is meet, so naturally, you'd want to target them both. But... did someone at Bumble forget humans read this? Or maybe they think the power of love transcends readability?

Given how often Bumble updates its name, this is likely an experiment, so I'll let it slide. 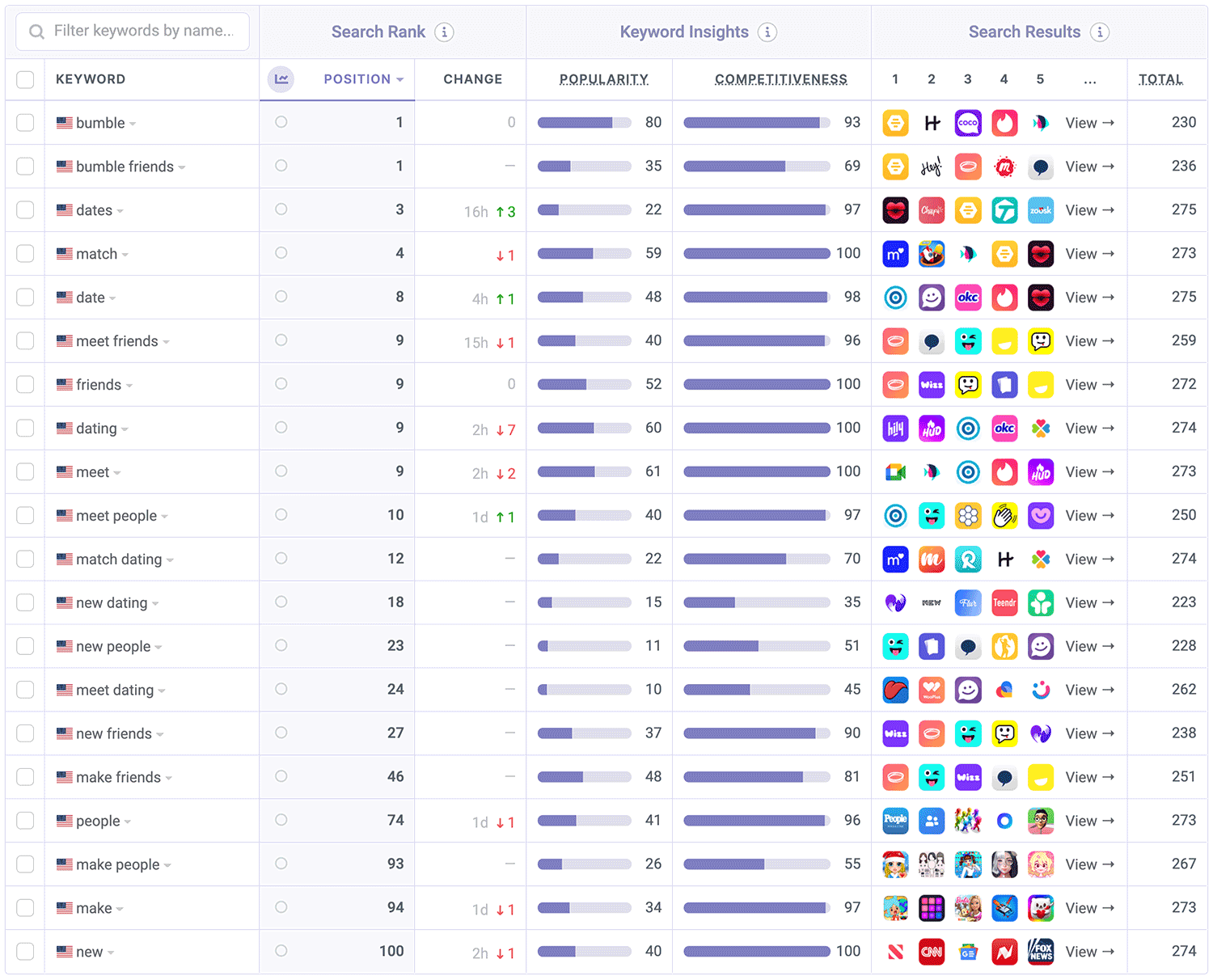 I had to look at this set for a while to understand if this is a genius combination or just another experiment. Correct me if I'm wrong, but this feels like the latter, and you can see it by the nearly nonexistent ranks.

Although the name and subtitle yield a bunch of combinations, the majority aren't useful or relevant. After we filter them out, we're left with just a few that have some promise. Filter out the branded ones and what's left isn't likely to really help with exposure.

Not only that. The two main keywords that turned the app's name into a keyword list aren't even performing all that well! I suspect that's due to making changes too often + a keyword list that's either extremely focused on something else or not at all.

I suspected all along that Bumble's keyword list isn't focused at all, and it's costing it in ranks. Having looked this over multiple times, I am now convinced that the keyword list is either very unfocused or is extremely irrelevant. I say this because I can't really see its impact on where the app is ranked, which is a clear sign it's not right.

I could be completely wrong here and miss something totally obvious, but this isn't my first rodeo.

This means that Bumble is leaving a lot of potential opportunity on the table and relying solely on the name and subtitle for keyword combination. Between the shorter character limit and considering those are updated often, Bumble is shooting itself in the foot, in my opinion.

Try not to do that with your app.

Where Else is Bumble Ranking?

This combo of name, subtitle, and keyword list gives Bumble a bit more than just the name and subtitle alone. Here are some of the highlights: 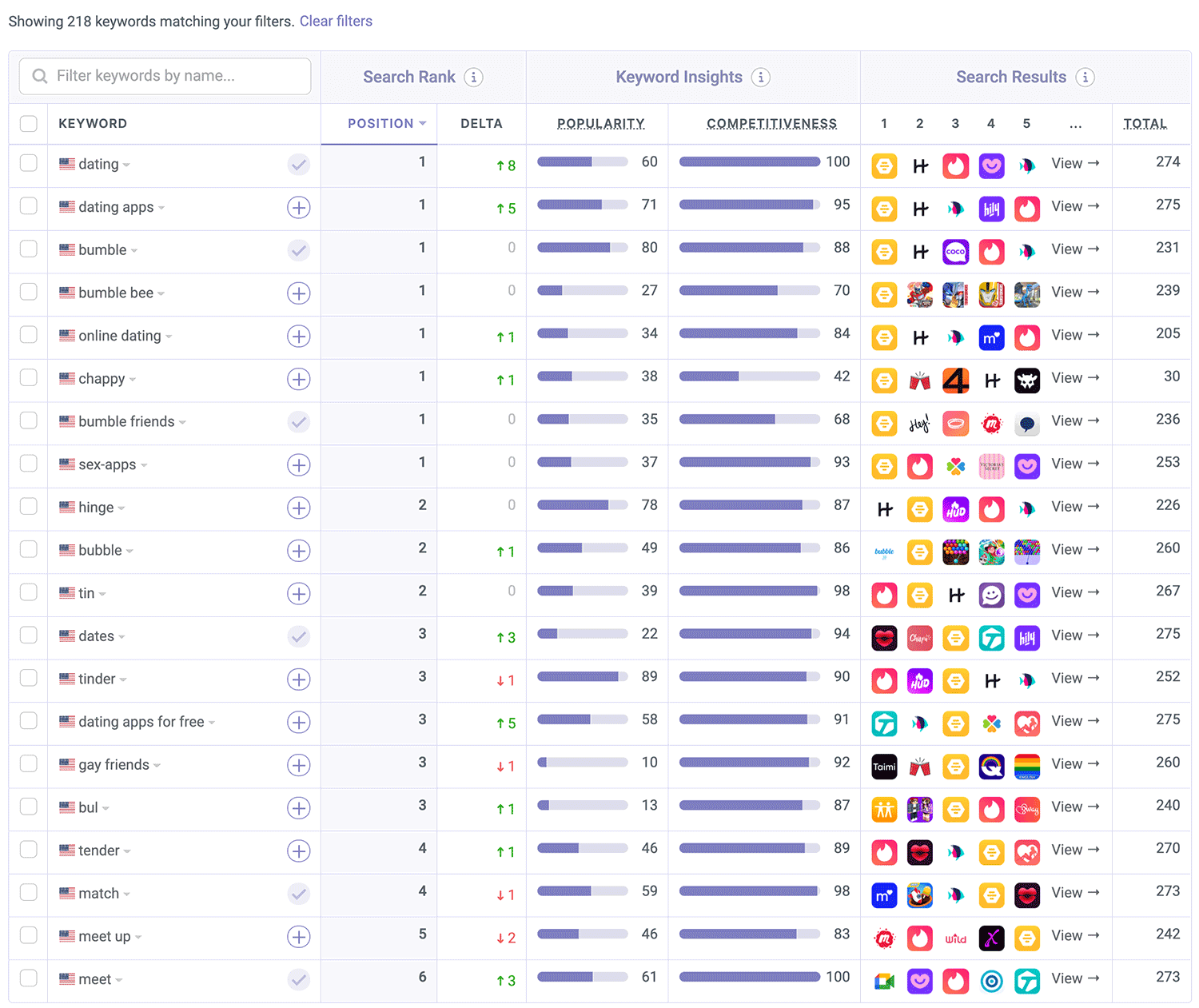 Bumble ranks for a whole bunch of keywords. The combination of constant iterations and lots of downloads give the algorithm a variety of options.

I managed to narrow down the list to ~200 keywords by filtering out keywords with single-digit popularity score, but if you look closely, you'll still see some keywords with what looks like high popularity but little relevance. Those generic keywords might actually have that popularity, but because they're very generic are likely to not convert well.

Still, this is a great reminder that experimenting and iterating offer multiple benefits.

Yellow is a tricky color to work with, but that didn't stop the designers at Bumble from putting together screenshots that check all the boxes. 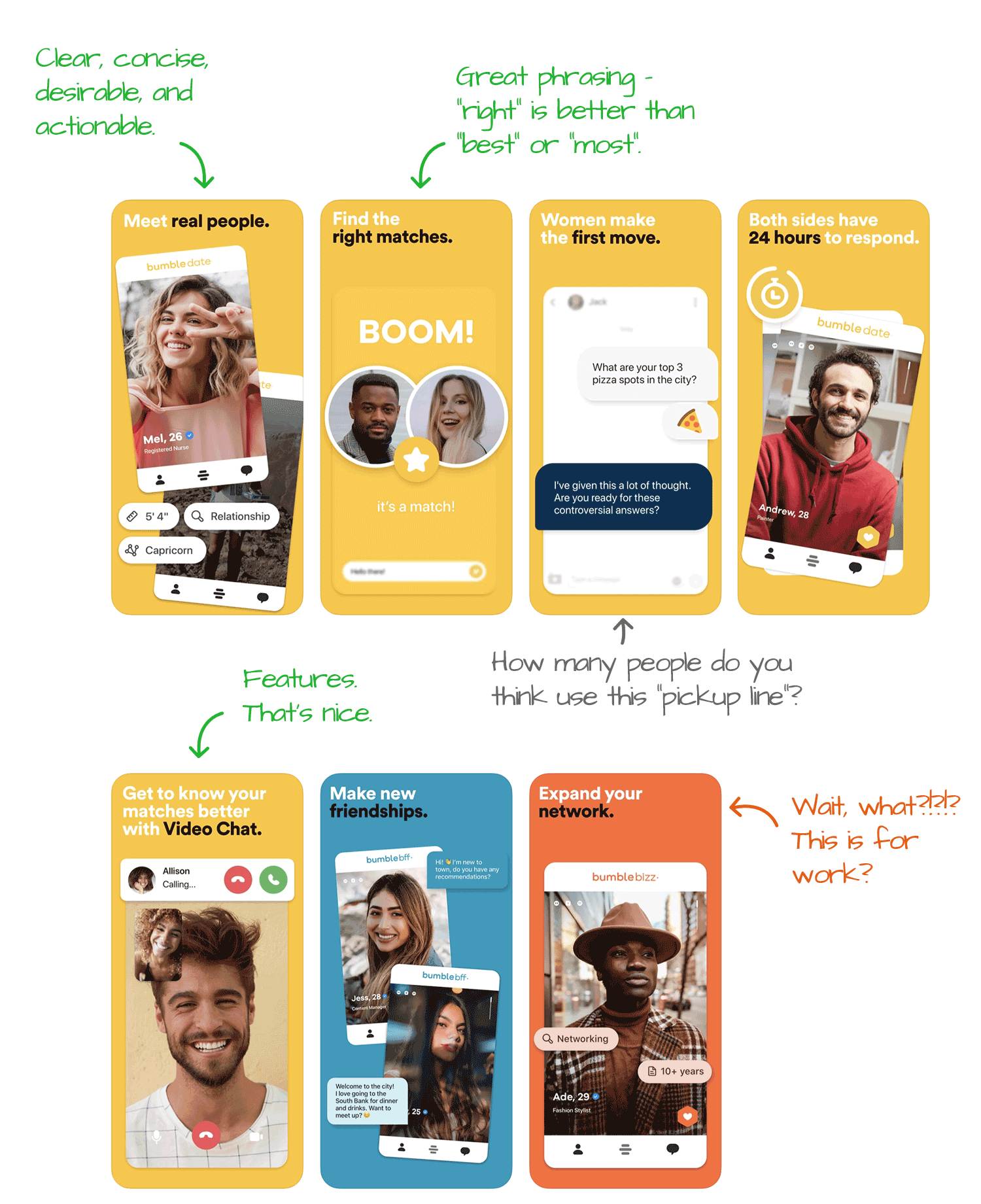 These screenshots tell Bumble's story very well and do it with flair.

Here's everything I love about these screenshots:

There's only one thing I find strange—that last screenshot. Sure, Bumble has a tab for "business dating," which isn't a concept I understand personally. I bet you one screenshot isn't enough to explain it, and frankly, all it does is confuse.

Bumble's only using 7 of its ten screenshots, so it can spend another screenshot or two explaining those other tabs. Should they? Probably not.

Bumble's got no video. See a pattern here? Apple's pretty strict about what it allows in its videos, which discourages some developers from even trying.

For Bumble, showing its UI isn't likely to be what really closes the deal and gets the download. Instead, a video would be useful if it could tell the app's story, like the screenshots, but without requiring the user to swipe to see them all.

Can Bumble make a video that gets through app review, probably. Should they? Worth an experiment.

The Verdict: Light Up That Tinder!

Bumble is a quiet beast of a dating app. It's been sitting in the top 10 grossing apps in the U.S. for a very long time, its downloads and revenue are growing steadily, and its revenue per download is higher than Tinder's.

Now that it's public, it's just a matter of time before it catches up to Tinder and gives it a serious run for its money, much like Pepsi does to Coke.

The ASO Tools I Use