ASO Teardown - How Chess.com Grew Downloads by 1,000% Thanks to ASO (and Netflix)

The Queen's Gambit, a new Netflix Original that debuted in October, made a lot of people remember just how much they love chess. Right after airing, downloads of apps for playing and learning chess grew by 30%.

If you've got an app for chess, this is your wave to ride! Chess.com seems to be riding the wave very well, so in this ASO Teardown, we'll take a look at how it's the #1 result for the keyword chess on Google Play.

Overall, Chess.com earns an A

Not so good: Where's the video?

Chess.com by the Numbers

Here's how Chess.com is performing in the U.S. based on our Competitor Intelligence:

10x Growth Thanks to The Queen's Gambit

Chess.com has had fairly flat downloads for much of 2020, with an average of just under 1,000/day on Google Play in the U.S., according to our app intelligence. Up until the end of October, at least. 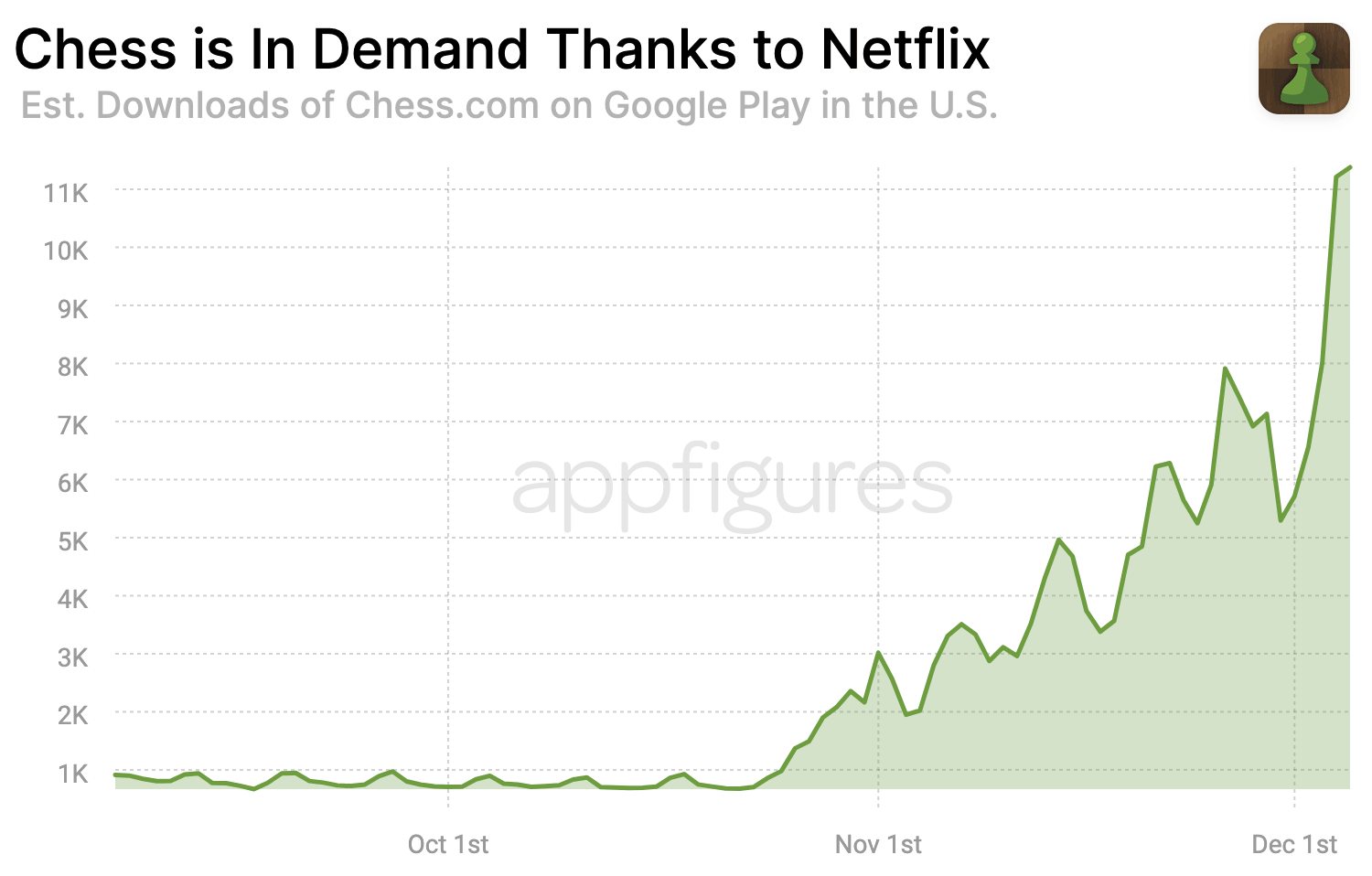 The Queen's Gambit was released on October 23rd, and downloads of Chess.com started growing almost immediately! A few more hundreds the first day, then a few more, than thousands. Downloads quadrupled within a week, reached 10x in four, and aren't showing any sign of slowing down.

Call it being in the right place and the right time, but don't forget that if Chess.com wasn't optimized to be found in search results, we'd be tearing down a different app right now.

The Competition is... Identical

There aren't many brands out there when it comes to chess, but there are lots of apps that go by the name of "chess." That makes competition both easy and hard at the same time.

Chess, Chess Free, Chess, and Real Chess. That's what you get when you search for chess on Google Play. And guess what? All of their icons show a chess piece of some sort. Which will you pick?

If you answered "the first result," you're probably right.

Based on the competitive analysis above, you can see Chess.com is second in terms of downloads, but looking at its trends, it's slowly overtaking first place. This table will look very different a week or two from now, thanks to ASO.

Let's kick off the analysis with the keywords Chess.com is using in its name and short description. Those send the strongest signals to Google's algorithm.

Unlike its competitors, Chess.com chose to aim a bit higher and included learn and play, which expanded keyword coverage. I wouldn't call this wide coverage, but at the same time, there isn't too much more they can be targeting without diluting the important keywords, so I'd say this isn't bad at all.

This focus seems to work. While Chess.com isn't #1 for most of its target keywords, and some of those aren't even popular (even though they sound like it), they own the most important one—chess.

Google mines the app's long description for keywords, using density and repetitions as proxies for relevance. Chess.com takes advantage of that with a fairly long description (~2.6K characters), more than 30 repetitions of the keyword chess (the competition averages 10), which gives it a fairly high density (possibly, too much).

Remember, the right keyword density isn't too low but also isn't too high.

chess comes in at 13% density, which is too high for most terms. But! Because it's a very generic term + pairs well with other terms sprinkled in the description, like play and learn, the algorithm doesn't see it as being too spammy.

That's not very common, so make sure you don't increase 3% - 5% density for your important keywords.

Where Else is Chess.com Ranking? 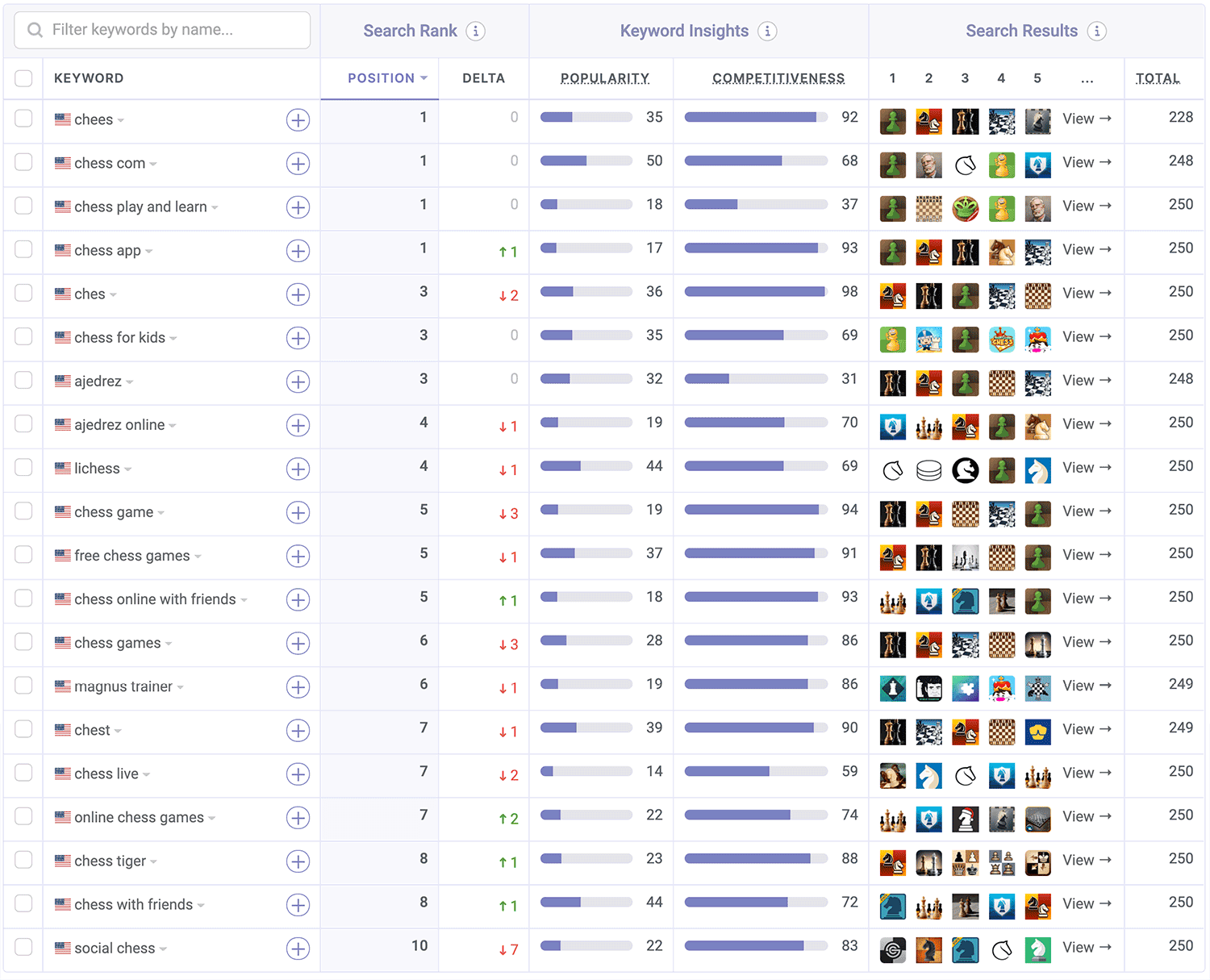 Chess.com already ranks #1 for the most important keyword and fairly high for the other keywords it's targeting, so everything here is pretty much gravy.

A few misspellings, alternate combinations, and even chess in Spanish (because the app has localized name and description, another win), are all giving Chess.com even broader coverage and more exposure on Google Play.

This is a result of keywords sprinkled carefully in the app's metadata, as well as the text of inbound links and keywords Google found in the app's reviews. Those last two may seem easy to game, and technically they are, but don't even think about it!

Simple but powerful. That's how I'd describe the screenshots for Chess.com. 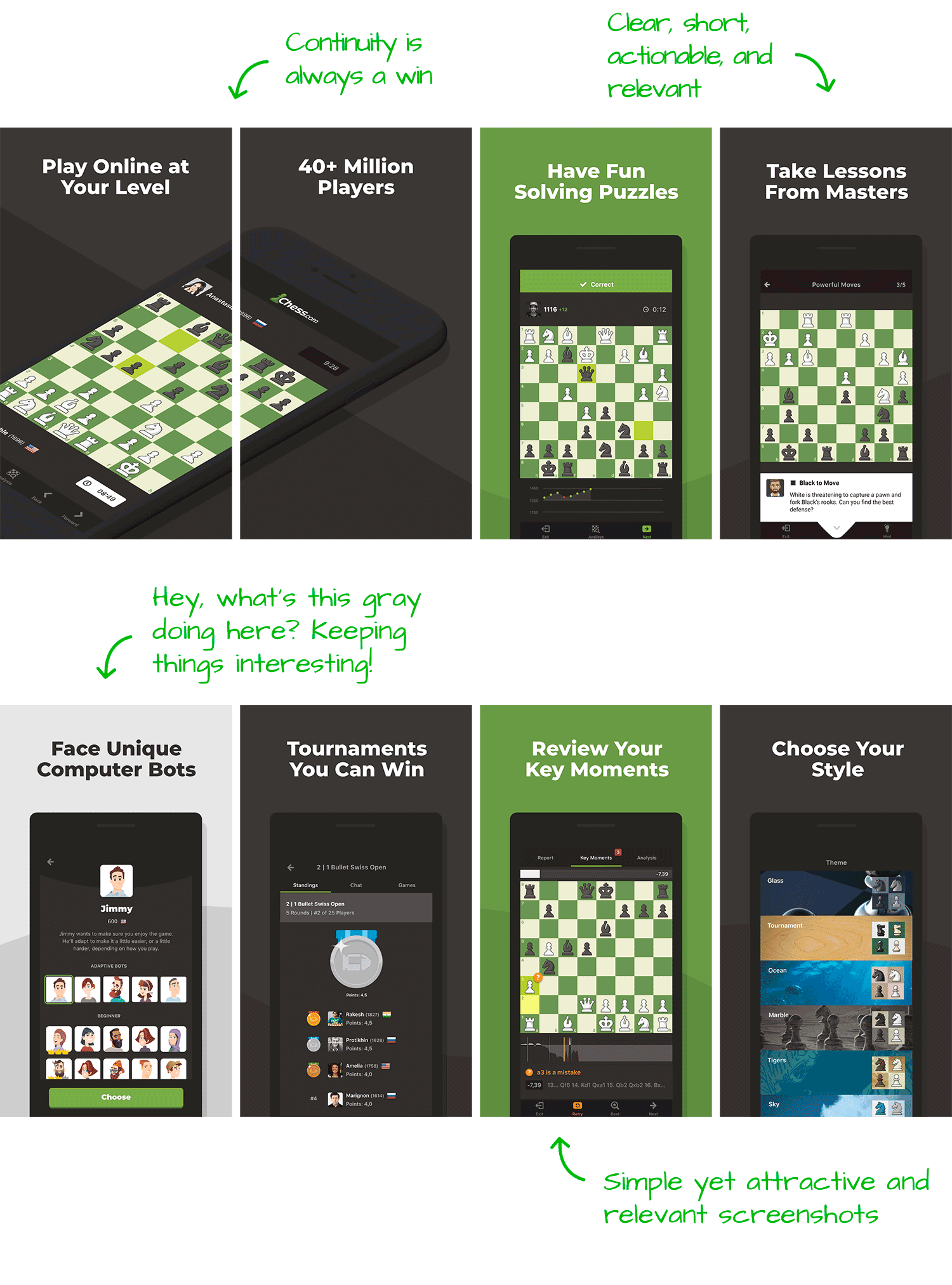 Contrast, short actionable captions, and a sense of simplicity star in this screenshot set. Better yet, they tell a story.

Skimming the screenshots, a user can easily tell what they'll be getting if they download this app. On its own, this set is pretty strong, but putting it side by side with its competitors, we can see it's in a different league.

The top competitors don't even caption their screenshots, leaving potential users to guess what they're looking it. Making users guess is a shortcut to giving a competitor the download. Please don't do that.

Chess.com isn't showing a video in its store listing right now but based on our historical data, they did before, and it wasn't a bad one either.

I always think not having a video is a missed opportunity and is one of the first things worth A/B testing. This is especially true for apps that have a ton of seemingly identical competitors, where a video can be a differentiator.

The key is to have it show what users might consider as "concerns" and solve them.

The Verdict: Surf's Up!

When an external event such as a TV show impacts a whole category of apps, it's usually those that are found first that win the lion's share of downloads. We can see that very clearly with Chess.com, which was well-positioned in terms of ASO before the show aired and is not reaping the benefits.

You can't always tell when the wave is coming, so it's best to be prepared at all times.