📈 Downloads continue to grow around key categories across the App Store and Google Play, including travel and entertainment. It wasn't enough to keep the App Store's MDI green, but it wasn't down by much.

Metaverse master Roblox, a youngster favorite, is the first in a series of IPO announcements this week, and judging by the numbers, it has every reason to be.

The game, which has been a chart-topper for what feels like an eternity, has announced its plans to IPO this week, showing strong mobile revenue. How much revenue, you ask? Just last month we highlighted Roblox as the most profitable game in the U.S. in Q3. 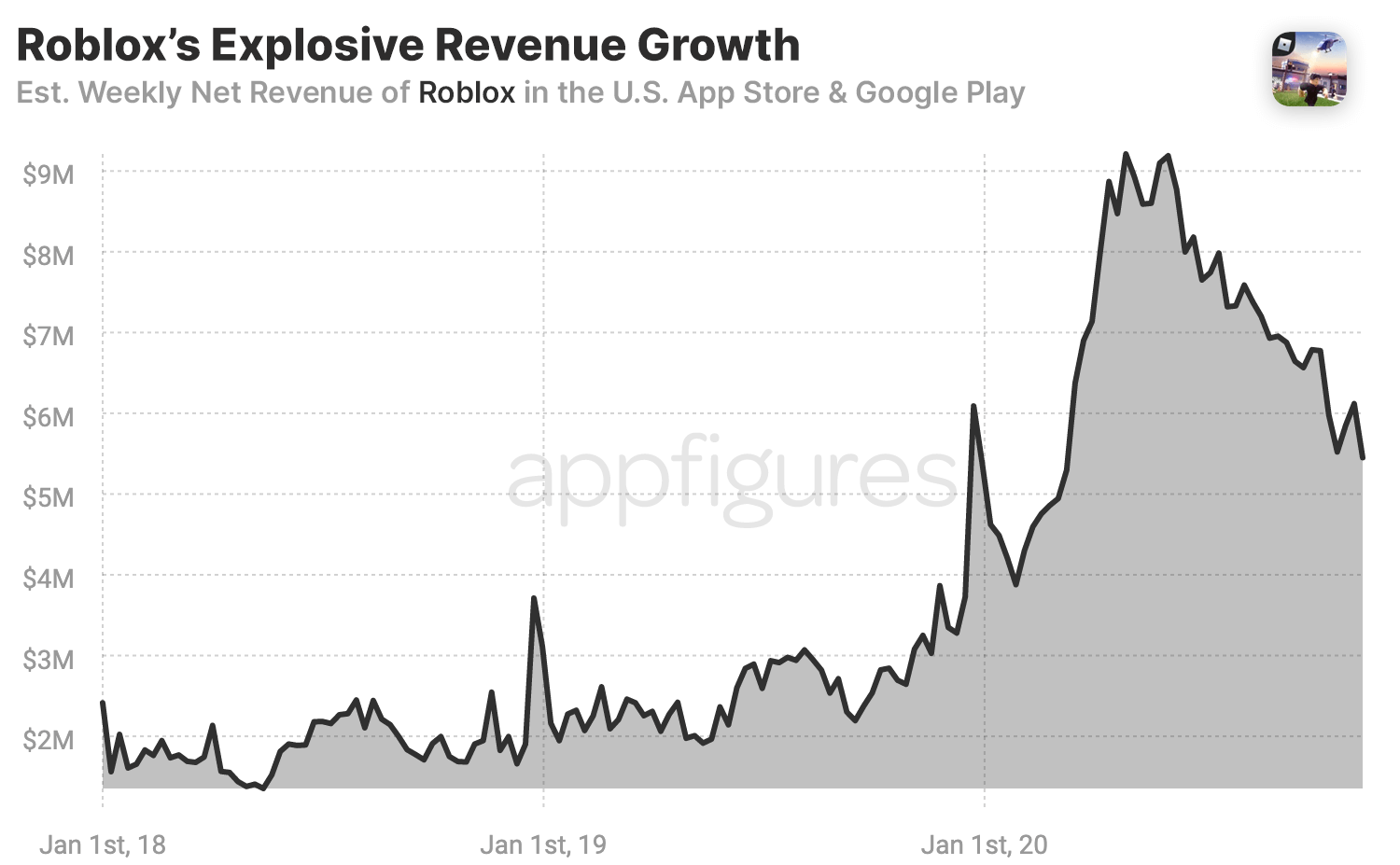 Looking at our estimates, we can see a stellar year for Roblox's U.S. revenue that's similar to the impressive revenue growth of another teen-favorite—TikTok. Revenue topped $300 million in 2020, more than doubling the $140M Roblox earned in all of 2019.

FYI: I've taken out Apple's and Google's cut from these estimates.

2020 hasn't been all that great for Airbnb, which we've looked at quite a few times this lockdown season. But that isn't stopping the company from IPOing.

Looking at the numbers, Airbnb took a big hit in March and into the summer, with downloads dropping more than 70% to an all-time low. But mid-way into the summer, downloads started to recover, with the U.S. leading the way in growth, and for a short period, exceeding pre-lockdown downloads. 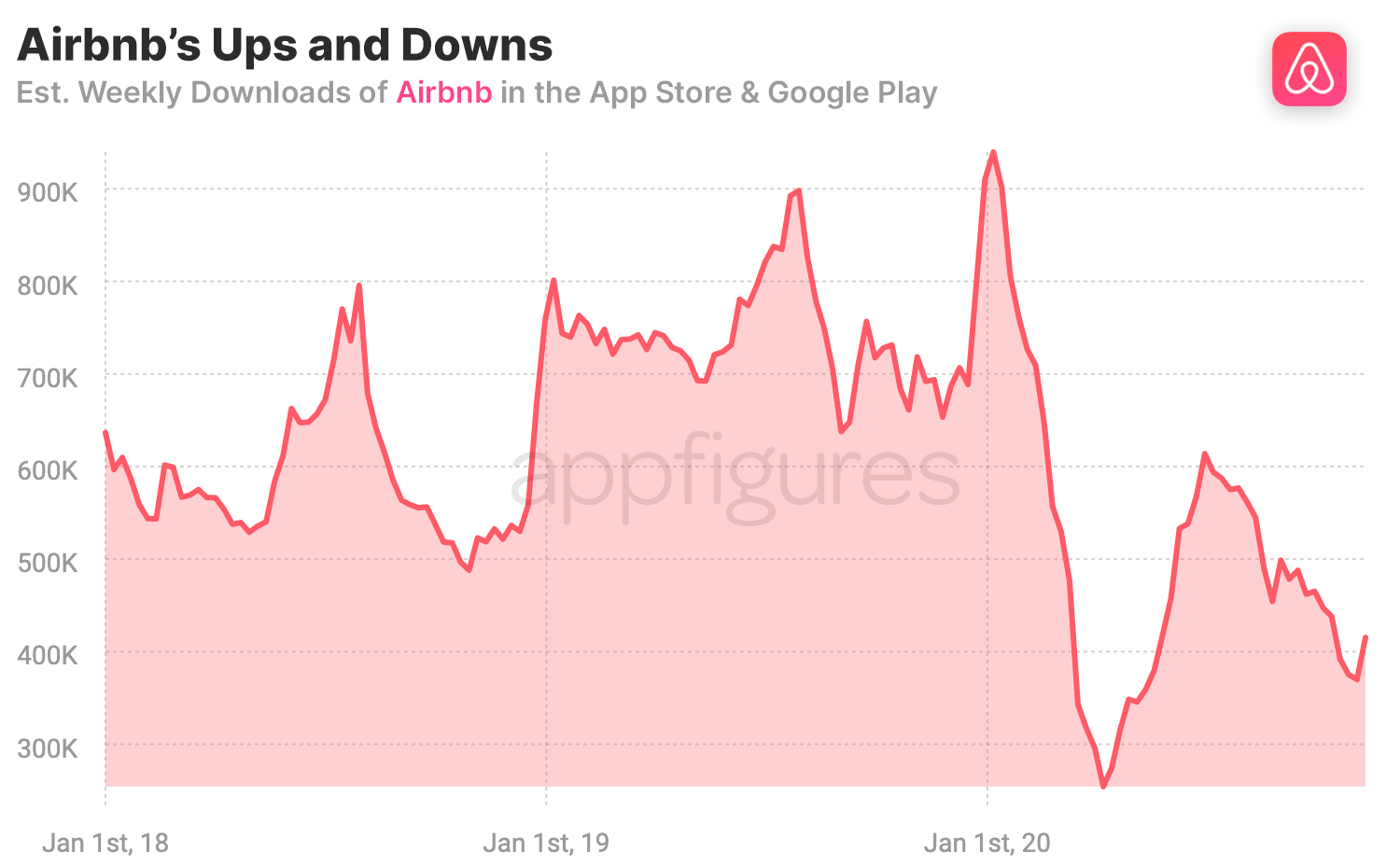 Based on our estimates, Airbnb saw more than 23 million downloads so far in 2020, 32% lower than the 34 million downloads it got in the same period in 2019. With a vaccine just around the corner and lots of desire to leave our homes, I expect numbers to more than rebound in 2021.

3. DoorDash's IPO is all about dominating the competition

The third app-first company that recently announced its plans to go public is food-delivery app DoorDash.

National lockdowns and an overall lack of desire to put on real pants helped DoorDash cement its lead in the U.S., with more than 28 million new downloads so far in 2020, according to our estimates. That's nearly twice the downloads of its closest competitor, Uber Eats, which saw 15.6 million downloads in the same period. 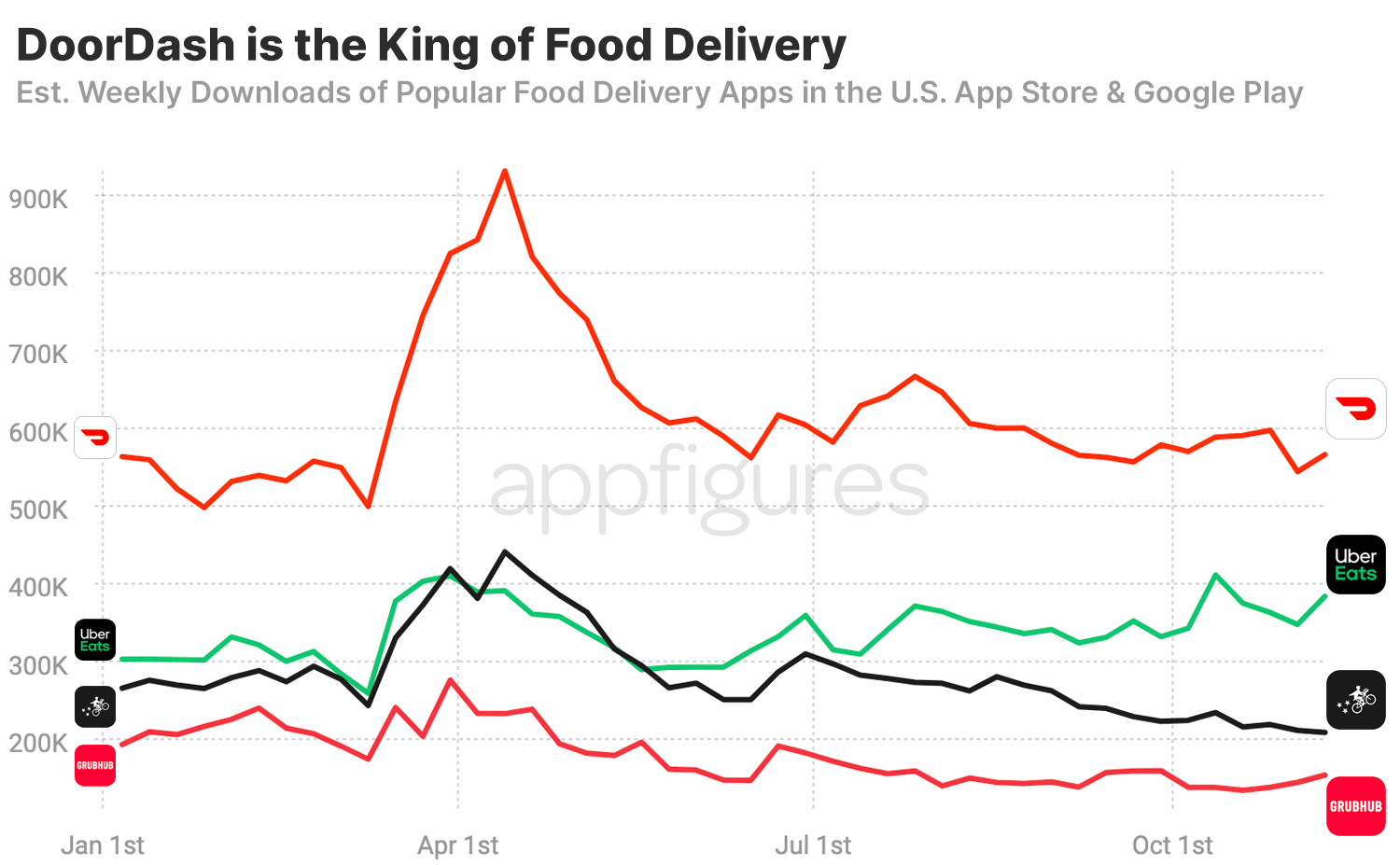 The Queen's Gambit, a popular new Netflix Original about a chess prodigy, has helped push downloads of chess games in the App Store and Google Play by more than 500,000 since its release a few weeks ago.

I analyzed download estimates of the nearly 200 chess games available for download right now. Looking at the trend, it's very clear something happened. We estimate that total downloads for chess games across both stores rose by about 30% since the end of October, from an average of 1.7 million weekly downloads to more than 2.4 million downloads in the last week. 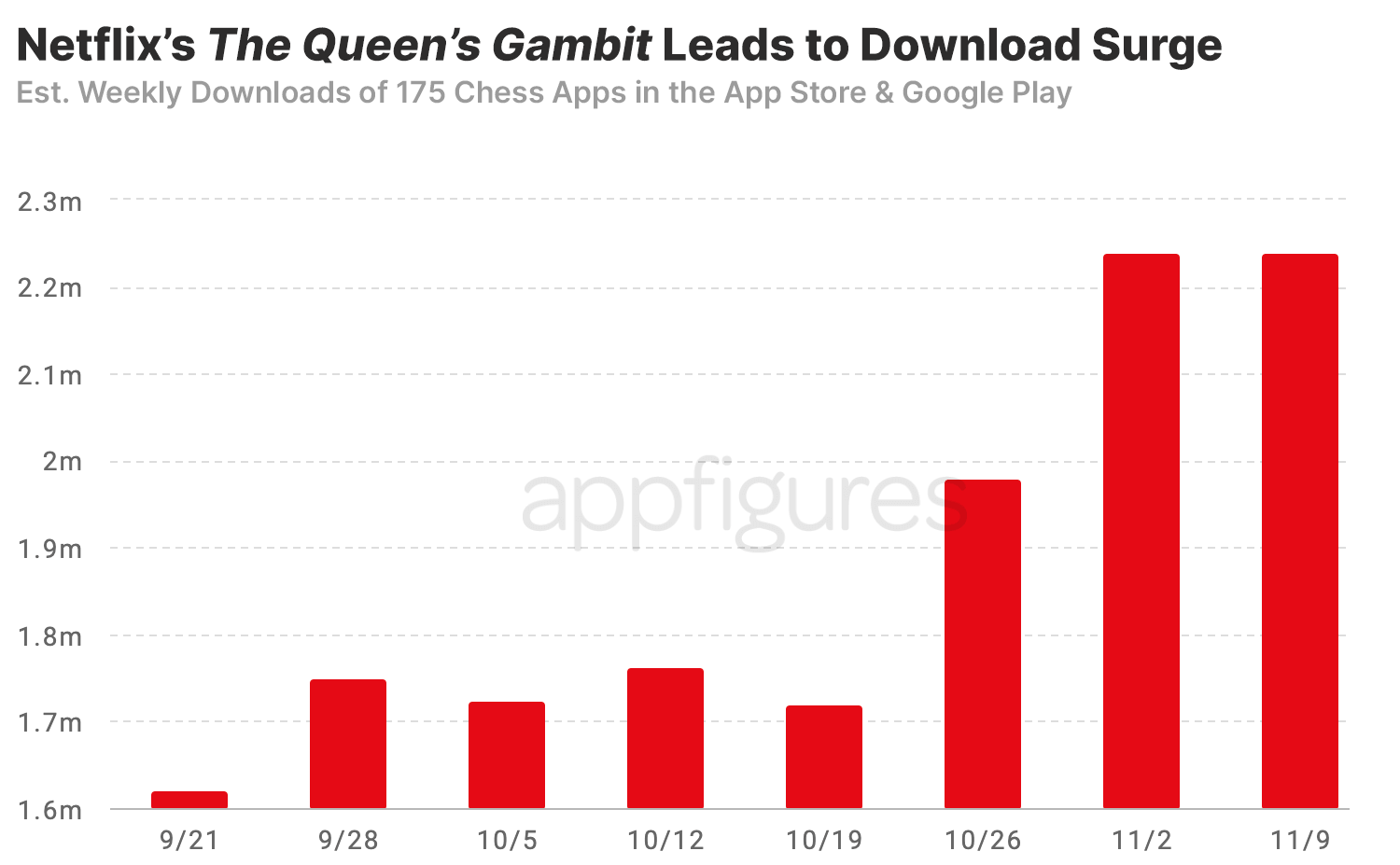 Chess.com, the most popular chess app right now, has seen downloads and revenue more than triple!

5. The biggest year for mobile shopping

With Black Friday around the corner and that same lack of desire to leave our homes, many are shopping from their phones this year.

The Mobile Download Index for the shopping category in the U.S. App Store is already up to 127.13, about 4 points above where it was around the same time last year and 10 points above 2018. But, last year didn't have a mid-year record-breaking spike, and even with that, downloads are still higher than before.

The trend isn't a surprise, but the sheer scale of this is. 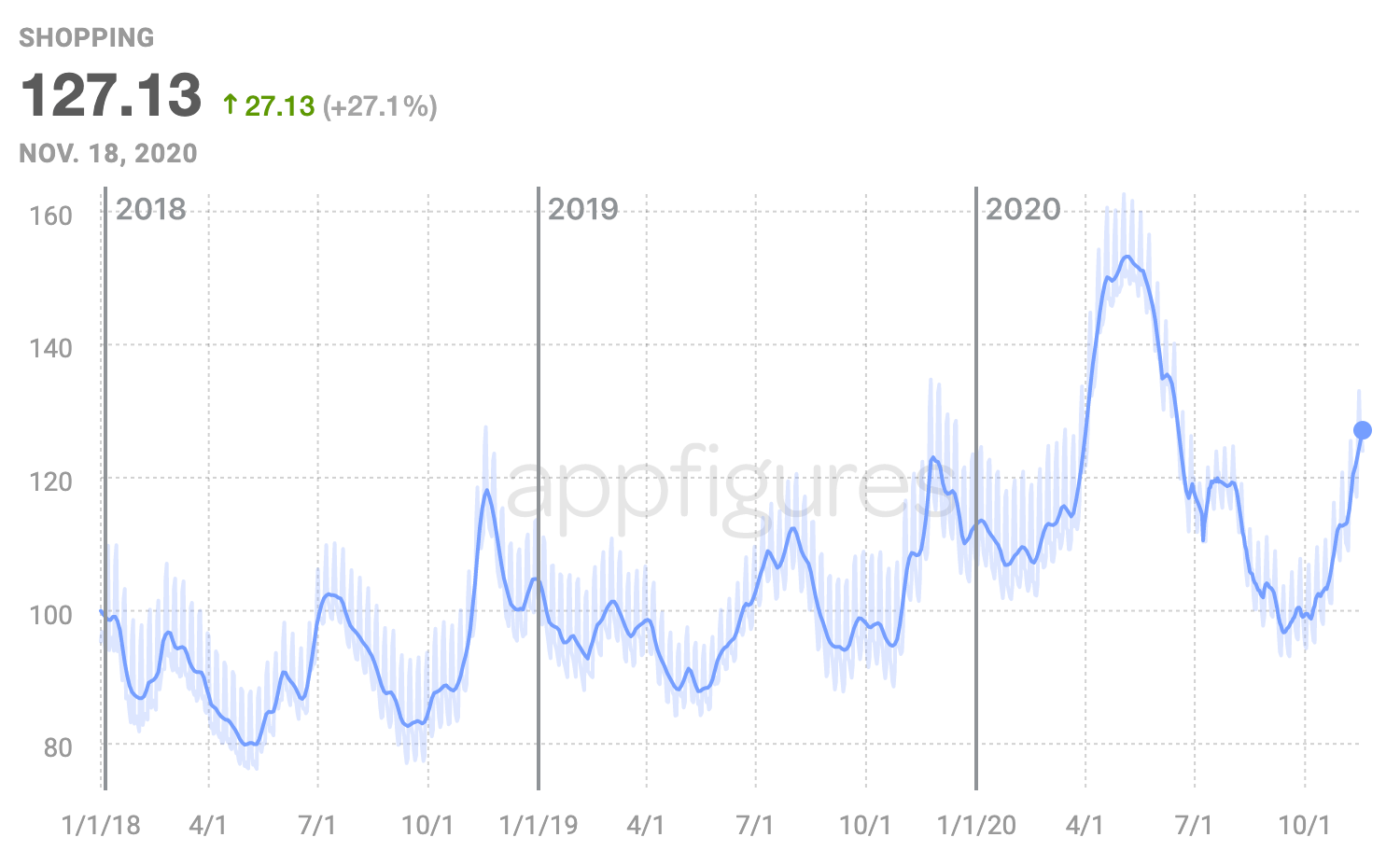