Racing is a big category on the App Store. The top 10 racing games in the U.S. grossed more than $10M in the last month alone. Games, more so than apps, are dependant on being discovered through search when not using paid ads.

In this teardown, we're going to analyze the one who's leaving nothing but dust behind it—CSR Racing 2.

Although it ranks well and has lots of downloads, overall, CSR Racing 2 gets a B-. We're going to dig into the why, outline the lessons, and takeaways, below.

Good: Uses keywords in the name, get a lot of downloads.

Not so good: Unnecessary character waste, not enough screenshots to convert.

CSR Racing 2 by the Numbers

Here's how CSR Racing 2 is performing in the U.S. App Store, based on our Competitor Intelligence:

A look at the last few years is showing just how big of a category racing is, and why investing in organic growth isn't a luxury but rather a necessity. 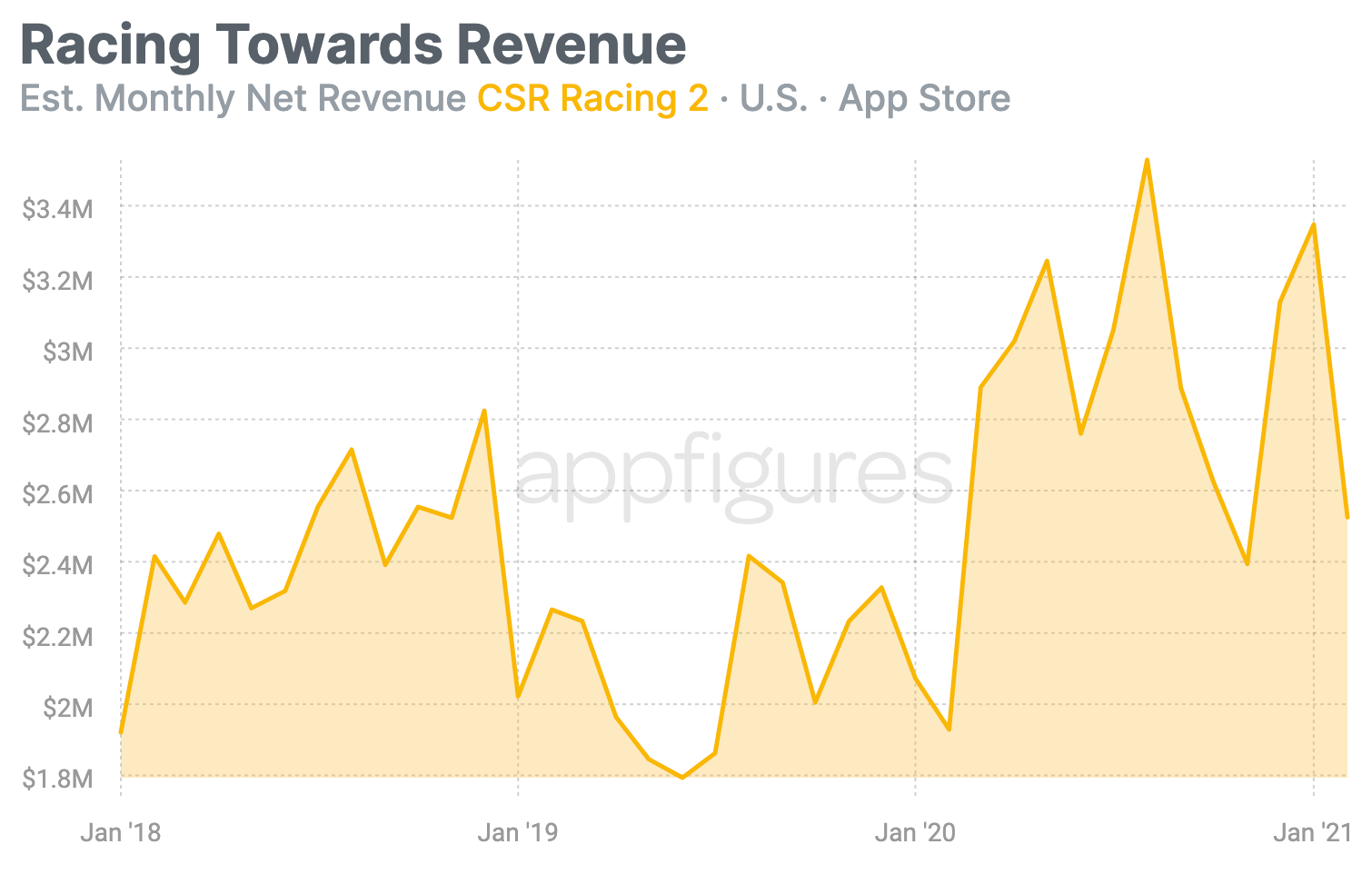 CSR Racing 2, which is the sequel to the successful CSR, has had a magnificent year in revenue. In the U.S., the game's largest market by revenue, YoY growth hit 32%, rising from 25M to over $33M.

This is thanks to a combination of growing demand for the category, more downloads, and most importantly, CSR 2's ability to turn downloads into in-app purchases.

Let's put that in context.

CSR Racing 2 vs. the Competition

Even though car racing is a pretty focused niche, within it, there are a few genres. You have the serious races, the very casual ones, and the ones that are Mario Kart. While they're all different, they end up competing for attention on very similar keywords, so in essence, they all compete with each other.

While CSR isn't the most downloaded app, it manages to do something its competitors must be looking at with envy, and that is turning downloads into in-app revenue very effectively.

An efficient monetization pipeline gives NaturalMotion, the developers behind CSR 2, a lot of flexibility when it comes to growing downloads and the bottom line.

More on how that fits in below.

Where is CSR Racing 2 Ranking?

This combo of name, subtitle, and keyword list gives CSR 2 a bit more than just the name and subtitle alone. Here are some of the highlights: 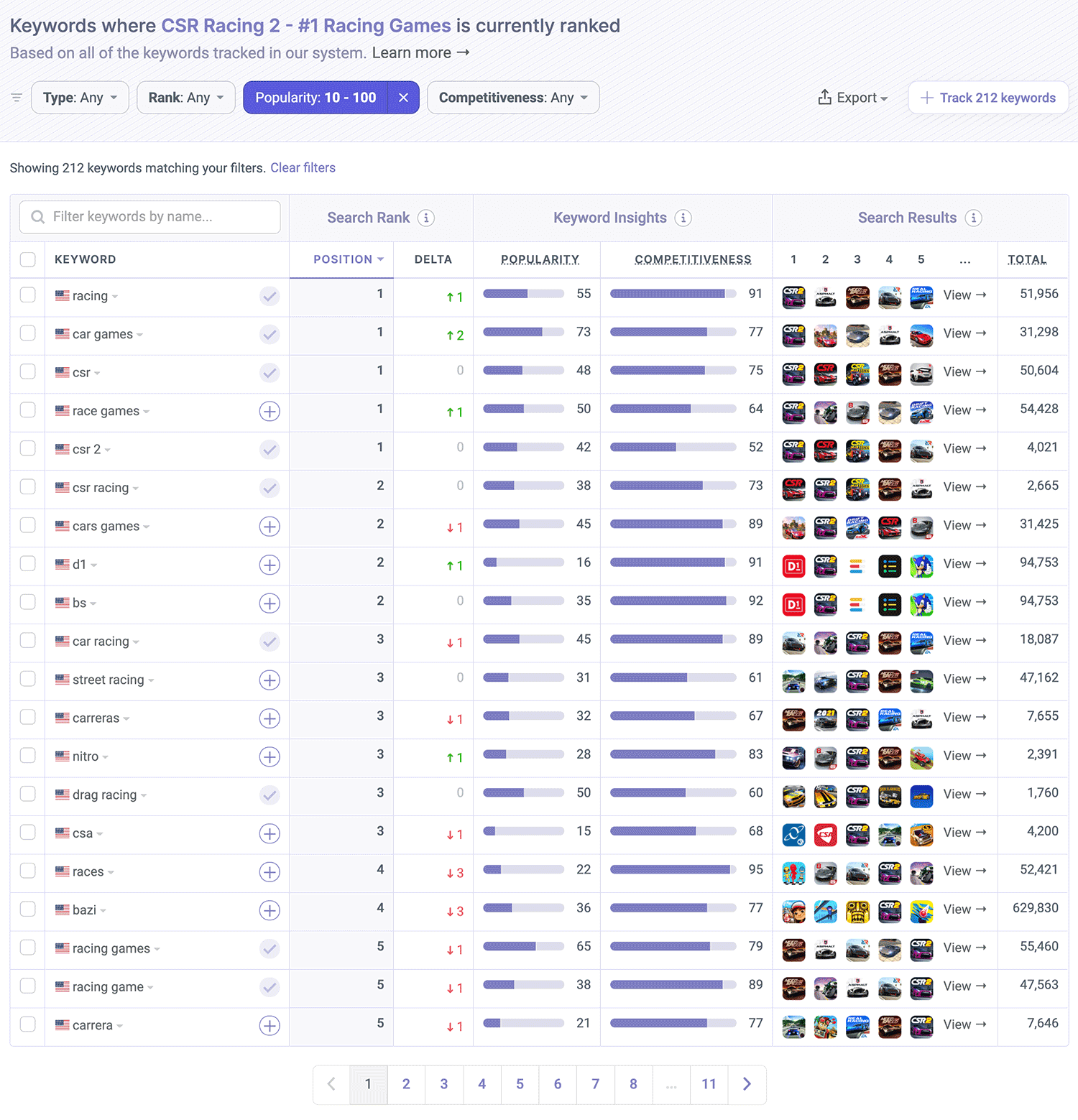 CSR 2 has been around for five years, which is enough time to show the algorithm a variety of keywords it can use to associate the app with through experimentation. However, just because the Discover report is showing 11 pages of keywords, it doesn't mean all are good.

The first page is mainly good keywords, but as we continue down the list, the keywords become less relevant, and the rank drops.

It's important to remember that this isn't a negative.

There are enough popular and relevant keywords there to give CSR 2 a good amount of visibility, and ranking for those is what matters most.

Telling the algorithm which keywords to rank your game in is done by using them in the game's name, subtitle, and keyword list. The first two send the strongest signal to the App Store's algorithm, so let's start by analyzing those:

You don't have to squint to see what looks like excessive repetition across these, which is somewhat wasteful. But before we start analyzing, let's see what these add up to as far as the algorithm can see:

That's a total of 17 keywords, all with a popularity greater than 5, so someone cares about them.

Let me pause quickly to talk about the obvious issues:

Let's see how CSR ranks for these. 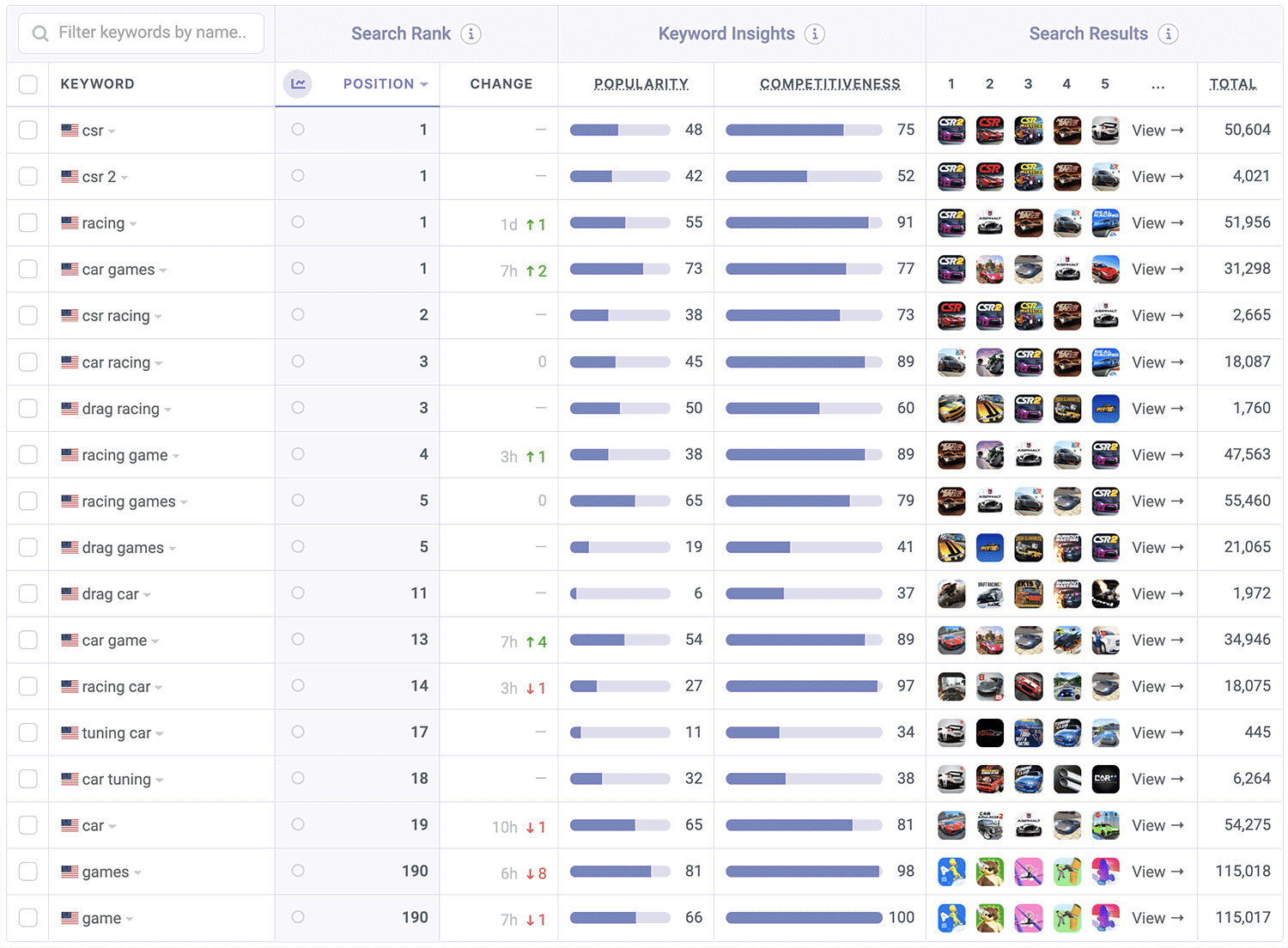 Even with those issues, CSR manages to do fairly well for very competitive keywords such as "racing" (51K results) and "car games" (31K results). CSR achieves these by having the right amount of downloads for these keywords, which it gets by using paid ads.

We recorded hundreds of ads across the main ad networks, including Google, Unity, Facebook, and AppLovin.

But those top ranks result in more downloads, which allows the title to maintain its position and continue its growth.

This is why it's important to understand how well a game can monetize. By having a very efficient download -> revenue ratio, CSR 2 can continue to use paid user acquisition to maintain its organic performance, at a cost it can afford.

I can think of four ways to leverage the keyword list for a racing game: alternative words, competitor names, features related to racing, and lastly, names of cars.

The last one might be a little bit of a reach, and potentially a trademark issue, so let's skip that one for now. The rest, CSR 2 manages to include in its list.

You'll notice I mentioned competitor names, something I usually advise against. But here there's a reason, and that is that games of this nature are less about the brand and more about the game. As such, a play looking for another similar racing game might actually be interested in CSR 2.

While the odds of that are still not very high, they are positive. This is something that's a bit more applicable to games than it is to apps, so don't go trying it with your app unless you're Uber Eats. For your game, if there is a competitor that's fairly well known and has replaceable game mechanics, it's worth experimenting with targeting their name in your keyword list.

Apple doesn't let copyrighted brand names in the keyword list, so if your competitor has a very unique name, you won't be able to use it outright. If that's the boat you're in, see the last lesson below. Otherwise, give it a try.

Games need screenshots that sell the "fun" aspect of them fast and make the benefits abundantly clear because attention spans are becoming shorter and shorter, and new games keep hitting the store every day. 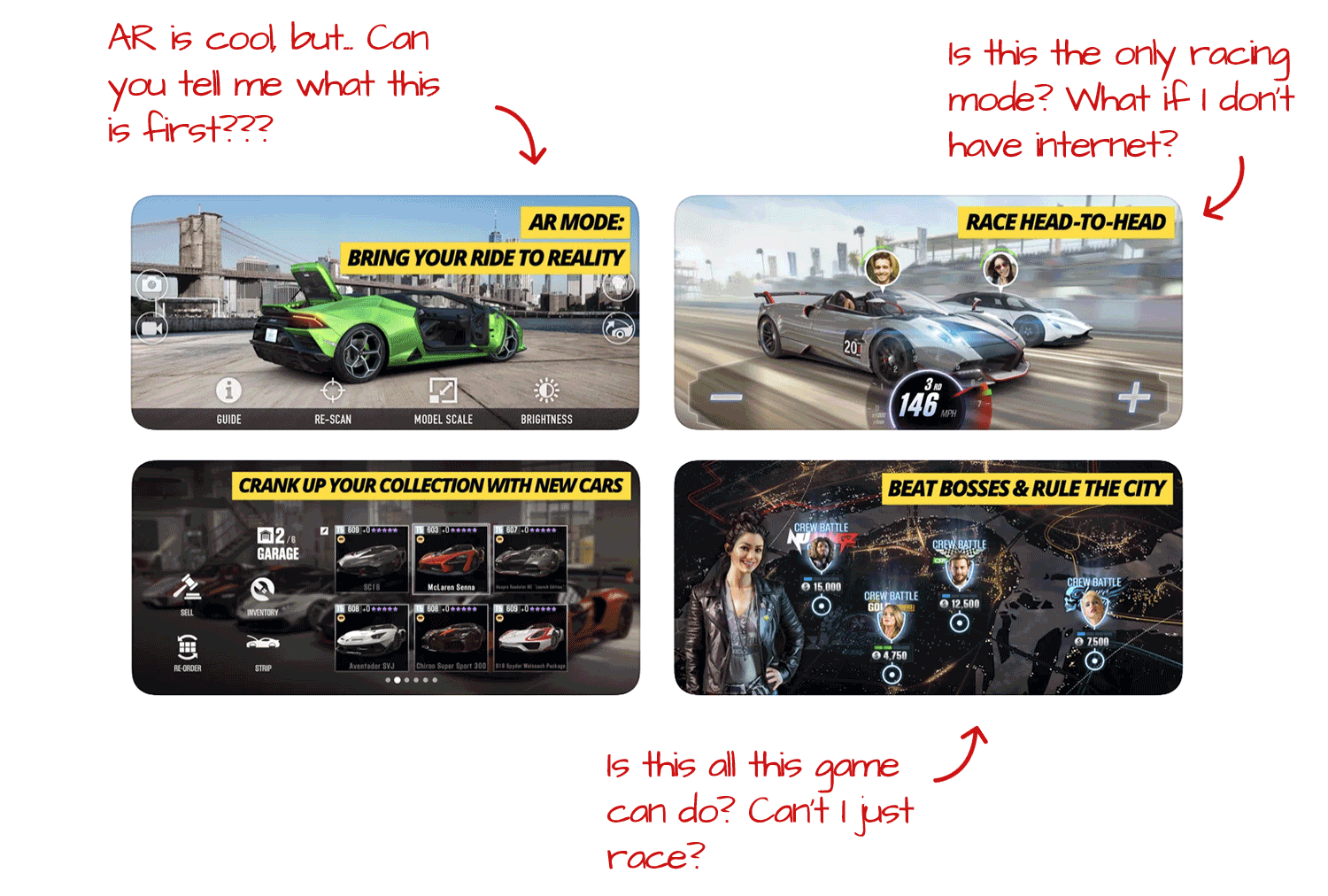 Again, CSR 2 seems to be leaving a good amount of opportunity on the table.

First, there are only four screenshots. Apple gives you 10, so that's 6 wasted screenshots NaturalMotion could have used to show off more of the game and its unique features, and use those to turn a page view into a download more quickly.

Then, they make a cardinal sin many apps and games make, and that is to skip answering the "what is this app/game" question and go directly into features.

Granted, the game has racing in its name, and the icon is a car, but... by not making it abundantly clear in the first screenshot, to turn a page view into a download, NaturalMotion is asking the user to connect the dots in their head. That's friction, and friction leads to lower conversion.

And lastly, where is the video? This is an ideal opportunity to entice a user to download by showing a few fast clips of races with actionable labels.

Switching gears, let's look at the permissions CSR 2 is asking users for, and the new privacy labels Apple is now requiring from all apps and games.

CSR 2 is asking for almost every possible permission iOS can offer, including:

And a variety of information about the user, from email address to name and phone number.

I can easily see why a racing game would need access to the device's motion sensors but not the user's calendar. While Apple has privacy labels for many things revolving around location and device identifier, they don't really have anything to explain where those contacts are going.

The privacy labels, which CSR 2 has set up (all 64 of them), are not really considered by many users yet because they're very new, but as that changes, I expect to see Apple expanding their reach.

We're not there yet, so right now privacy labels and permissions don't impact ASO, but that will change in the coming months, so make sure you pay attention to that.

The analysis won't be complete without peaking under the hood of the game. For that we turn to our SDK Intelligence:

Here are the highlights:

Unity is, by far, the most used game engine in the App Store, so it's no surprise to find a game that's powered by Unity these days. To an extent, it's a technical advantage when operating cross-platform titles.

While that isn't a surprise, nor is the number of trackers and attribution SDKs, the low number of ad networks is. But, with such an efficient way to turn downloads into in-app revenue, the reliance on ads is likely not as important for CSR 2 as it is for titles that don't monetize users directly at all, so they rely on the big networks (Facebook and Google) to do all of the heavy lifting.

Is that a tactical advantage, or is NaturalMotion leaving money on the table?

In case you were skimming the headers, here are the highlights:

Overall, CSR 2's amazing ability to turn downloads into in-app purchases means its developers can continue to advertise the game to get those downloads, but like other games we've analyzed before, not turning those paid downloads into organic growth is both wasteful and continues the dependency on ads.

With a few small tweaks to its metadata NaturalMotion can grow to the top of its category, and if they can so can you.