Summer's here, and after a loooooong year of very minimal travleing, it's finally safe(r) to move around the cabin. Many expect this summer's travel to be done by car, making it incredibly important for car rental companies to be found easily on the App Store.

In today's Teardown, we'll look at Turo, an Airbnb for unique (and regular) cars that's seeing downloads skyrocket and is investing into ASO. Also, the #1 result for "car rental."

Overall, Turo earns an A+

The gist: Turo's ASO is very focused, its screenshots are clear and actionable, and we can quickly see what that translates into—top ranks.

Turo by the Numbers

Here's how Turo is performing in the U.S. App Store, based on our Competitor Intelligence:

Turo has been on a beautiful growth path for the last few years. 2020 put a dent in the trend, but the last few weeks have shown that trend is back in full force now. 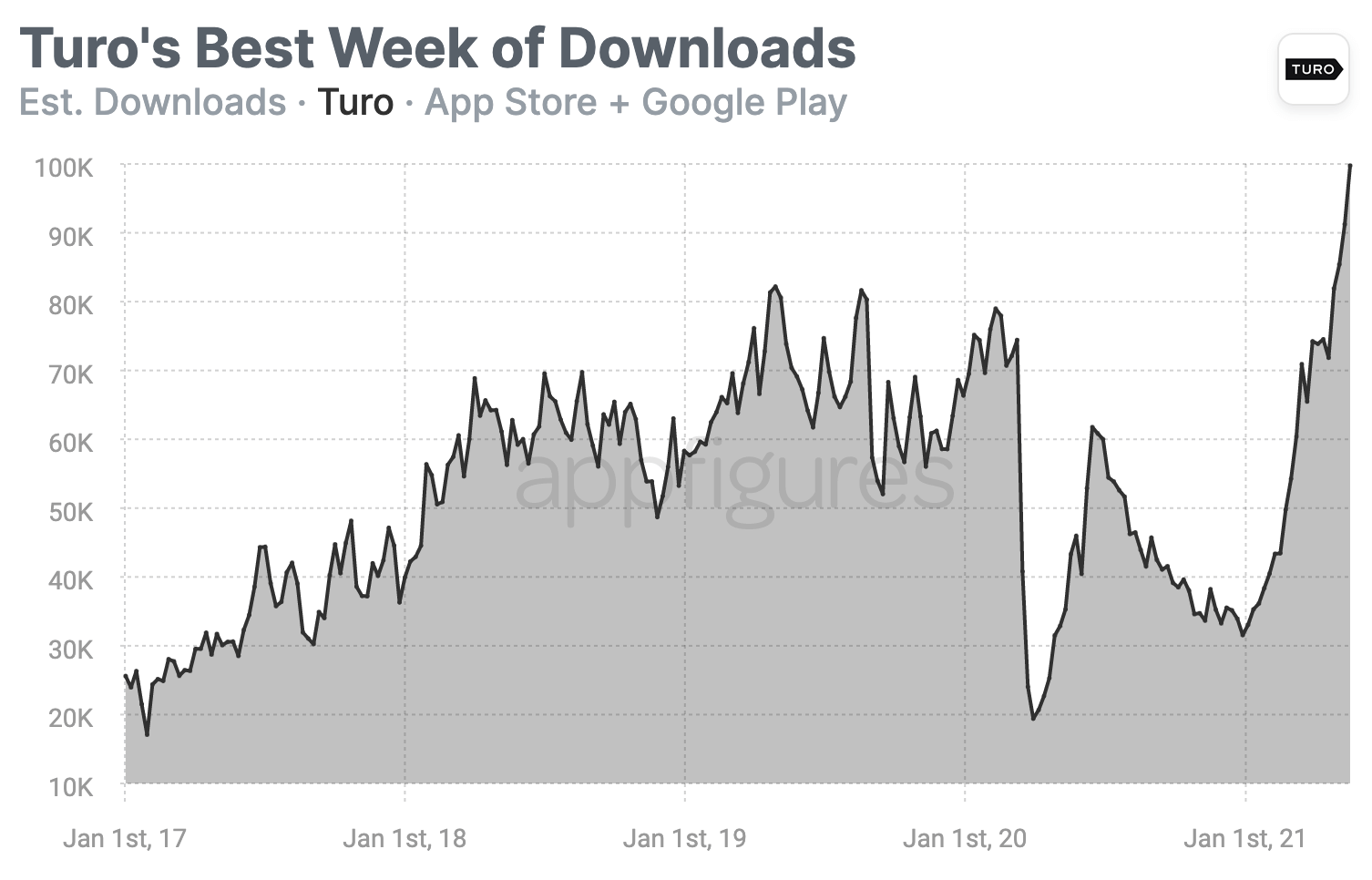 Since 2017, Turo's downloads nearly tripled, according to our estimates, reaching 100K last week. The most downloads Turo has ever seen in a single week.

Lots of downloads are a great incentive for improving organic discovery. Something Turo does very well, as you'll see below.

Turo vs. the Competition

Turo competes with a few companies that aren't exactly alike. Some are more established than others, but really, it's about how they work.

Traditional car renters like Enterprise and Avis own cars and the locations where you rent from. It's pretty safe overall, but also pretty set in which cars you have access to, and not always cost-efficient. Zipcar owns its cars, but they're spread around, so you can be less sure of what you'll get.

Then you have Turo and Getaround, where you're really borrowing someone else's car. It can get pretty sketchy. And I say that having used both, and at least one multiple times. 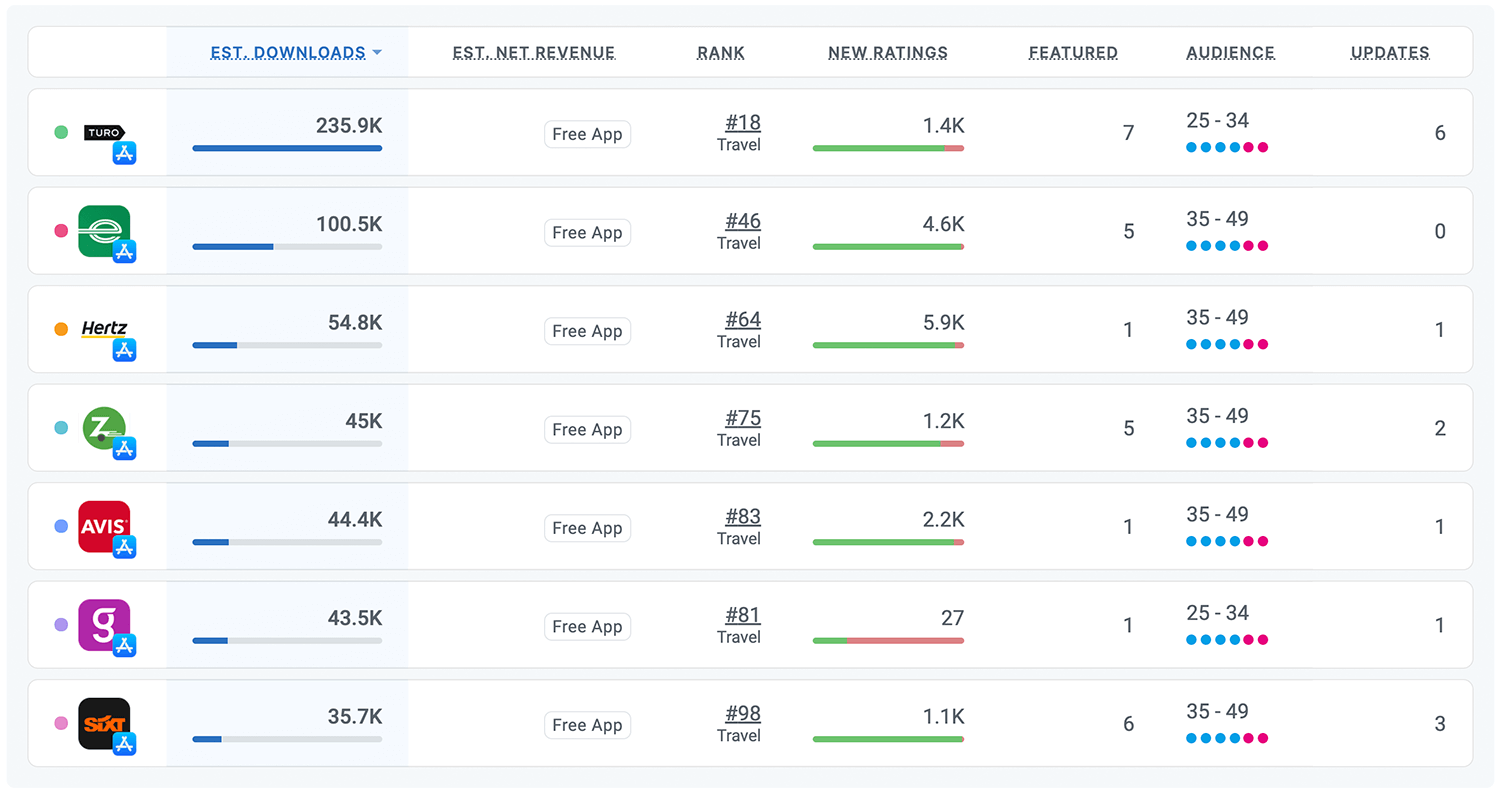 Why is that car rental explanation important to downloads and ASO, you ask? Well, it's important to remember that Turo isn't just competing on discovery. It also needs to establish its brand. We'll get to why and how that's done later in the teardown.

In numbers, Turo is the leader of the pack. One of its advantages is that it lists very exotic cars at fairly reasonable prices, making it a top destination for those who want to cruise in a nice Tesla for the weekend. At 236K downloads, it outperforms traditional Enterprise by more than twice and the OG rent-by-app Zipcar by a factor of 5.

But downloads alone aren't getting Turo top ranks. Those come from having good keywords.

How is Turo Found?

The good thing, which also happens to be the bad thing, about an industry like the one Turo is in, is that there aren't that many combinations of words people can use to describe what they want.

This means apps can focus their ASO on a small set instead of having to compete on too many and dilute their competitive ability.

It also means there are fewer long-tail options, so that focus has to be right. 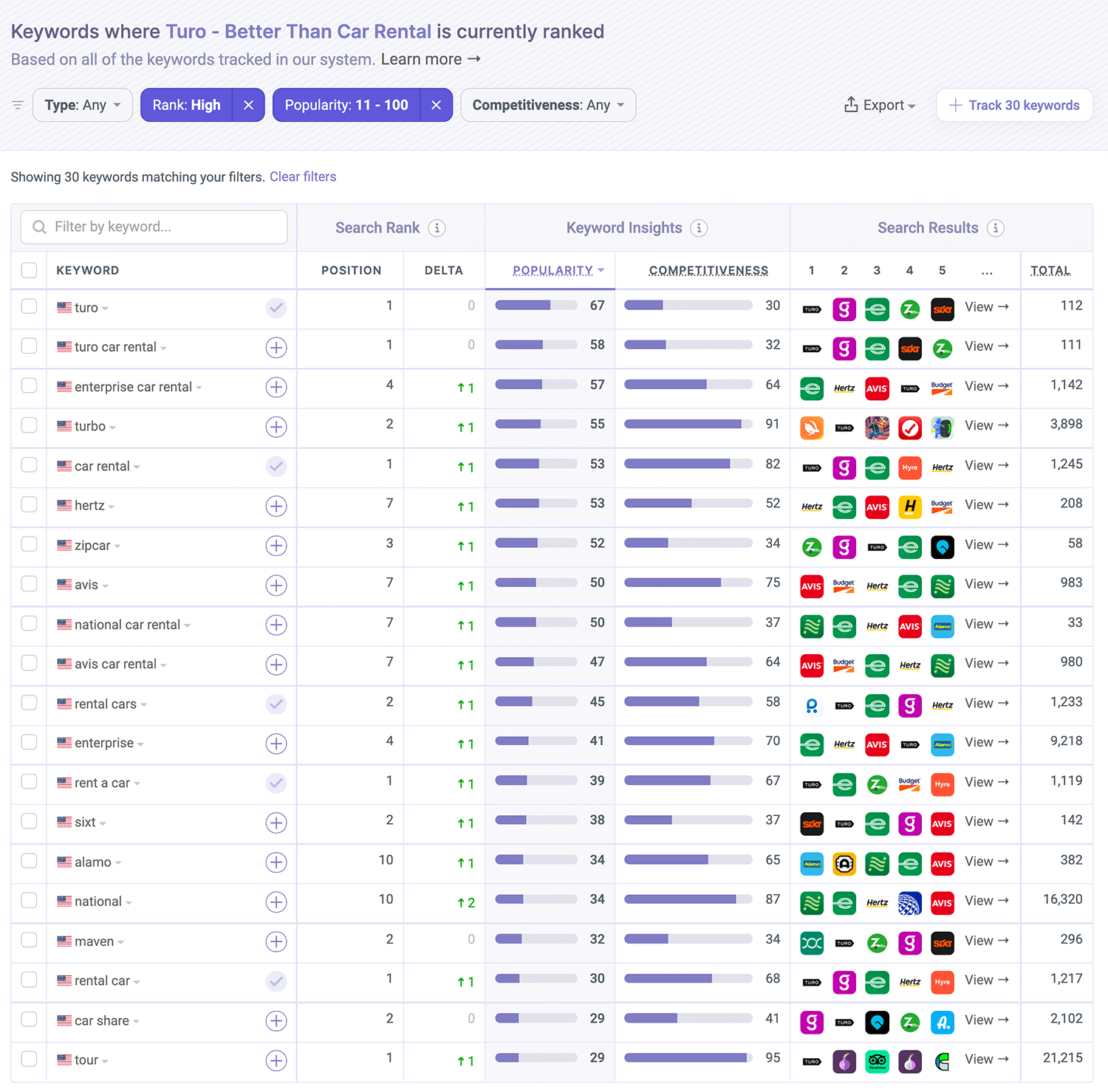 Turo's focus is just right, and the result is top ranks for popular keywords as, we can see from the Discover table above.

There are a few strange and irrelevant ones in there, but for the most part, the list consists of popular and relevant keywords such as "car rental" (#1), "rental cars" (also #1), and "car sharing" (#2).

Let's dig in by looking at the keywords Turo is targeting in its name and subtitle. Those two send the strongest signals to the App Store's algorithm.

Car rental is a competitive niche, so Turo's strategy of focusing on the most important terms is a great strategy. And, in addition to getting all the right terms in place, Turo's name is also great for humans, who get an idea of what the app does and why it's unique, immediately.

"auto" is another way to say car, a few variations of "rent", and also variations of "luxury". I do believe "budget", the name of a competitor, is in there but only that competitor. Other competitor names don't give too strong a signal even though Turo ranks for them—that's something the algorithm does on its own.

These keywords complement the name and subtitle very well and extend it by combining (ex. "luxury car rental").

Both of these are fairly limited, so it probably won't double downloads, but both are worth a try.

It's video time! Turo has an App Preview, and it's exactly what a video should be like.

This video does a few things well:

It does it all fairly quickly, so you don't have time to get into details but just have that "ooooh" feel.

If a user hasn't tapped the "GET" button with excitement after watching the video, the screenshots do a great job at "selling" all that Turo has to offer. 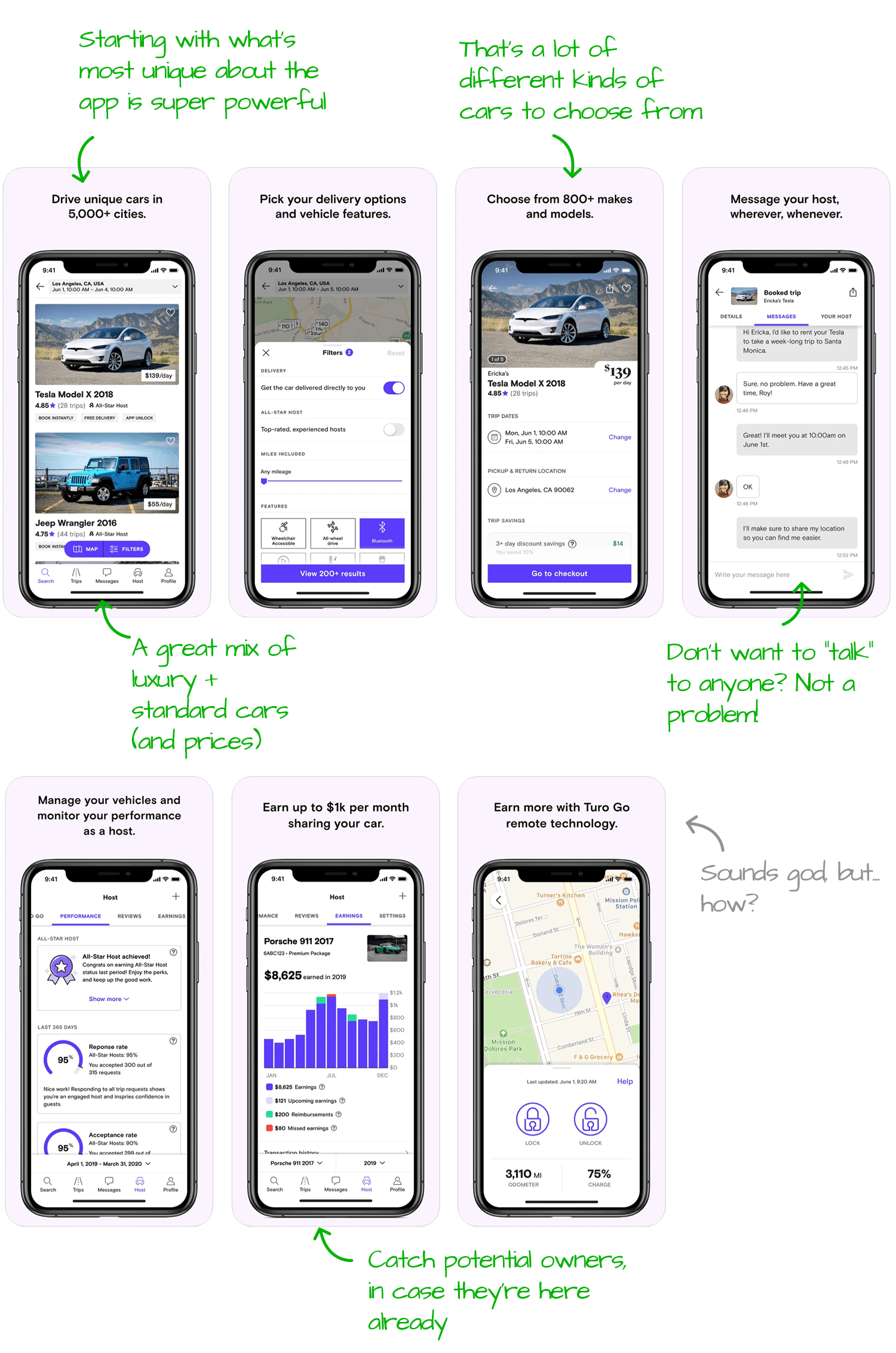 Colors, contrast, and actionable captions are incredibly important. But, more important is that you always focus on showing what the user really wants (a nice car) as well as answering any questions they might be asking themselves (like "how much does this cost?").

What Data is Turo Collecting?

In this new(ish) section, we look at the privacy labels apps declare on the App Store. Turo is definitely collecting, but considering it's a free app, it's not too bad.

That's a bunch of things to track, but considering what Turo does, I can easily explain them all. The one item I find peculiar and not common is "Financial info" in the "Data Not Linked to You", which indicates they're keeping track of aggregate payment information, likely for some type of internal intelligence by area, or may some other slice (car type?).

That's what I don't love about Apple's privacy labels. In theory, they offer a glimpse into what data apps use, but in reality, it's not all that useful. And I say that as someone who looks at these all the time across hundreds of apps + knows what they each mean.

To mere mortals, these probably are just another section to swipe through. I'm sure Apple will improve these, and I'm excited for v2, maybe at WWDC next week? A boy can hope!

Here are all the SDKs and APIs we see powering Turo:

Glancing at this list, I can easily tell the team behind Turo is serious about growth. The list is pretty long but other than a focus on growth, I don't see anything obviously wrong here.

These are great solutions that come with a monthly cost.

I poked at Turo's SDK graveyard (aka the SDKs that are no longer installed), and the one that caught my eye is Intercom, a popular service used for staying in touch with users. Although Intercome is used by nearly 30K apps, according to Explorer, I've seen more big names drop it over the last couple of years and moving to more integrated solutions. I wonder why.

The Verdict: Start Your Engines!

The travel category is seeing growth like never before due to the "great unlockdown". We can see it through the Mobile Download Index, which has the category growing more than 50% year to date.

That's great news for car rental companies and even better news for Turo, which currently has them all beat when it comes to App Store Optimization.

But... that doesn't mean Turo can sit on its laurels. App Store Optimization isn't a set-it-and-forget-it type thing because the algorithm changes, as do competitors and users.

Another reason to continue investing in ASO is App Tracking Transparency (ATT), Apple's latest move to strip big ad networks like Facebook and Google of their fine-grain personal profiles, making it much harder (read expensive) to do targeting.

If anyone from Enterprise, Zipcar, or any other direct competitor of Turo is reading this, I'd highly recommend taking the time to invest in organic discovery.