What if I told you there's one number that can help your app get discovered by more people and increase the odds of getting them to download it and give you a way to know how your users feel about your app? Sounds pretty awesome, right?

User ratings play a critical role in getting more downloads, and in this guide, we'll look at how they help with downloads, and what you can do to get more ratings, and fast.

Why Do User Ratings Matter?

Ratings are an overlooked tool in the marketer's toolbox. Many developers think that users will just give them a 5-star rating if they do a great job. If your app has been in the store for more than a week, you know that's not true.

User ratings play a critical role in the path to getting more downloads in a few ways:

Ratings Have a Direct Impact on App Store Optimization

Getting found is the first step in earning more downloads because if they can find it, they can download it.

Ratings play a role in organic discovery. Apple and Google factor user ratings into their search algorithms because they proxy user satisfaction. Although ratings aren't the only item in the mix, you'll notice that top results almost always have a higher rating count and a higher average. That's not a coincidence.

Ratings Contribute to Social Proof and Increase Conversion (aka. Downloads)

When the time comes to decide which app to download, users tend to rely on what other users think about an app. A higher rating count and average tell undecided users that the app or game have been validated by others. Hence, the more ratings, the more likely it is you'll get the download.

The opposite is also true. A low rating count and star average are more likely to signal that users who used the app didn't like it at all, and would lose you the download.

Ratings Tell Your If You're Doing a Good Job

The Secret to Getting More Ratings Is... Asking!

Okay, okay, user ratings are important. That's now obvious. But what can you do other than wait for them to come in?

You can ask your users right in the app, using a native prompt. 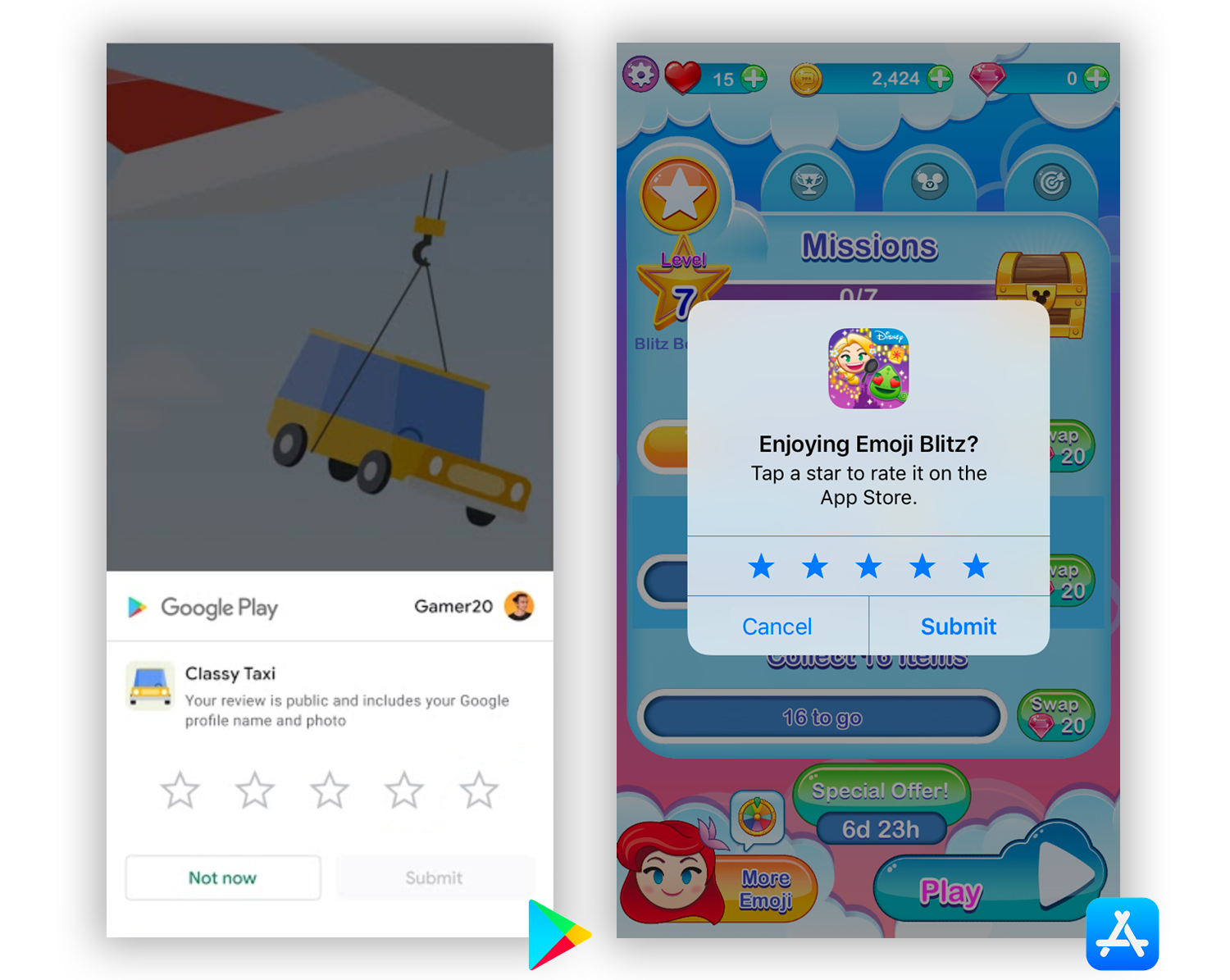 Apple, and very recently Google, offer developers a simple way to ask users for a rating without leaving the app. Using these prompts, you can ask a user to rate the app or game at the perfect moment and without breaking their flow.

How When to Ask Users for a Rating

The first step to asking is to implement the actual code that brings up the prompt. That's the easy part, and all it takes is just a few lines of code. The real challenge is when to ask for that rating. Ask at the wrong time, and at best, the prompt will be dismissed, or worst it'll turn into a negative rating.

This is important: Apple and Google place limits on how many times you can show the native dialog to your users. Apple's limit is three times per year. Google's isn't documented but is probably not far off. So even if you didn't care about the worst-case scenario, you still can't just ask whenever you want.

Here are a few options to have the best chance of getting a positive rating:

Can You Incentivize Users?

Not directly. Well, you can, but Apple and Google both say no, so you'll have to risk getting your app removed from the store.

What Apple and Google don't want is for you to say something like, "Give me a 5-star rating, and I'll give you 500 coins". That's a no-no. Please don't do that.

Dor Alaluf from Playtika tried something else, and it earned him the Most Impactful ASO Hack award at the 2019 ASO conference in New York.

Playtika flipped the order. First, they gave the user a few coins, without asking for anything in return. Then, they prompted the user to rate the game.

The result was a 4x increase in new positive ratings, nearly overnight. 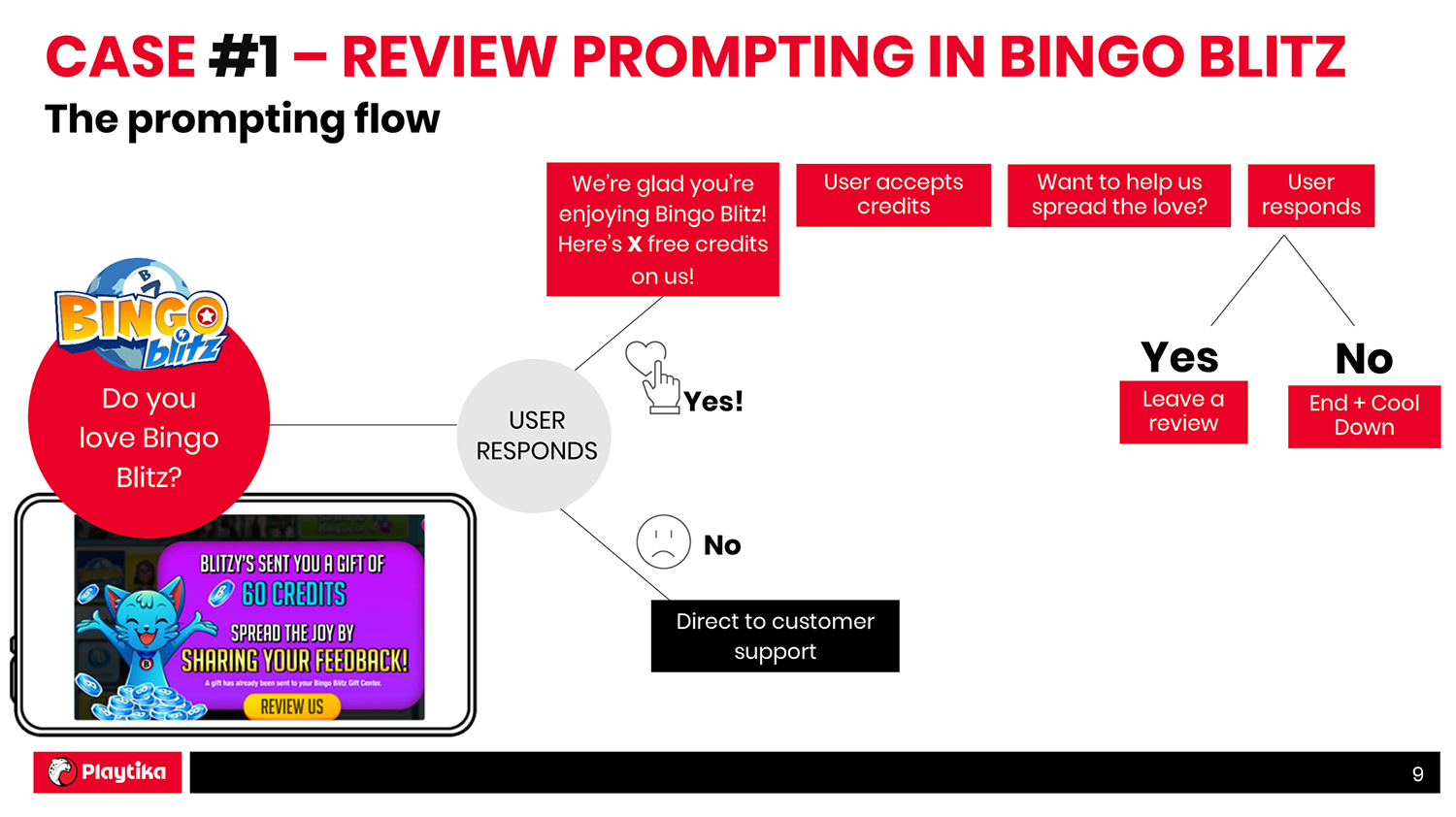 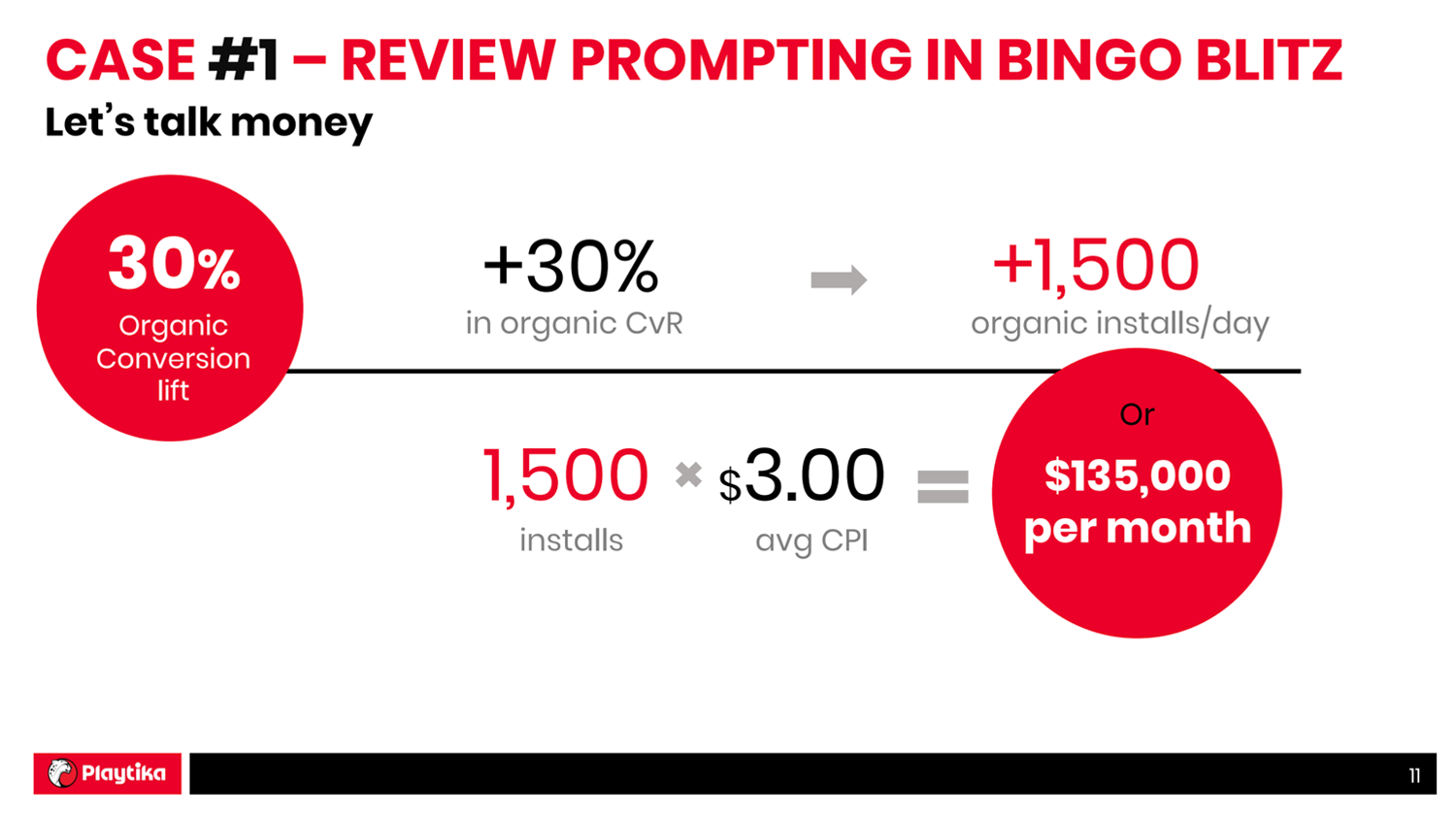 It's All About the Flow

Did you notice a pattern in all of the strategies above? They fit into the user's flow and don't take them out of it. That's important to keep in mind.

The user is doing something with the app or game, and asking for a rating isn't something they're expecting. If you interrupt what they're trying to do, be it tracking their downloads in the Appfigures app or finishing a level in a game, they won't be your best friend.

However you end up asking, make sure it doesn't interrupt the user's flow.

Getting this perfectly right isn't going to happen on your first go, and that's okay.

The best results, whether optimizing your keywords or trying to increase ratings, will come from running through several iterations. Launch your first attempt, then watch the numbers, try something else, and compare results.

The stores don't make it easy to track ratings, especially not over time or broken down by country (for Apple), but Appfigures does. You can even use Appfigures to track the ratings of competitors and compare theirs to yours.

Not tracking with us yet? Get started →