The Top Mobile Apps in September by Downloads and Revenue

Summer's all gone, and we have our first month of back to normal school. September was a fairly quiet month in the world of apps, which means the leaders are still leading. 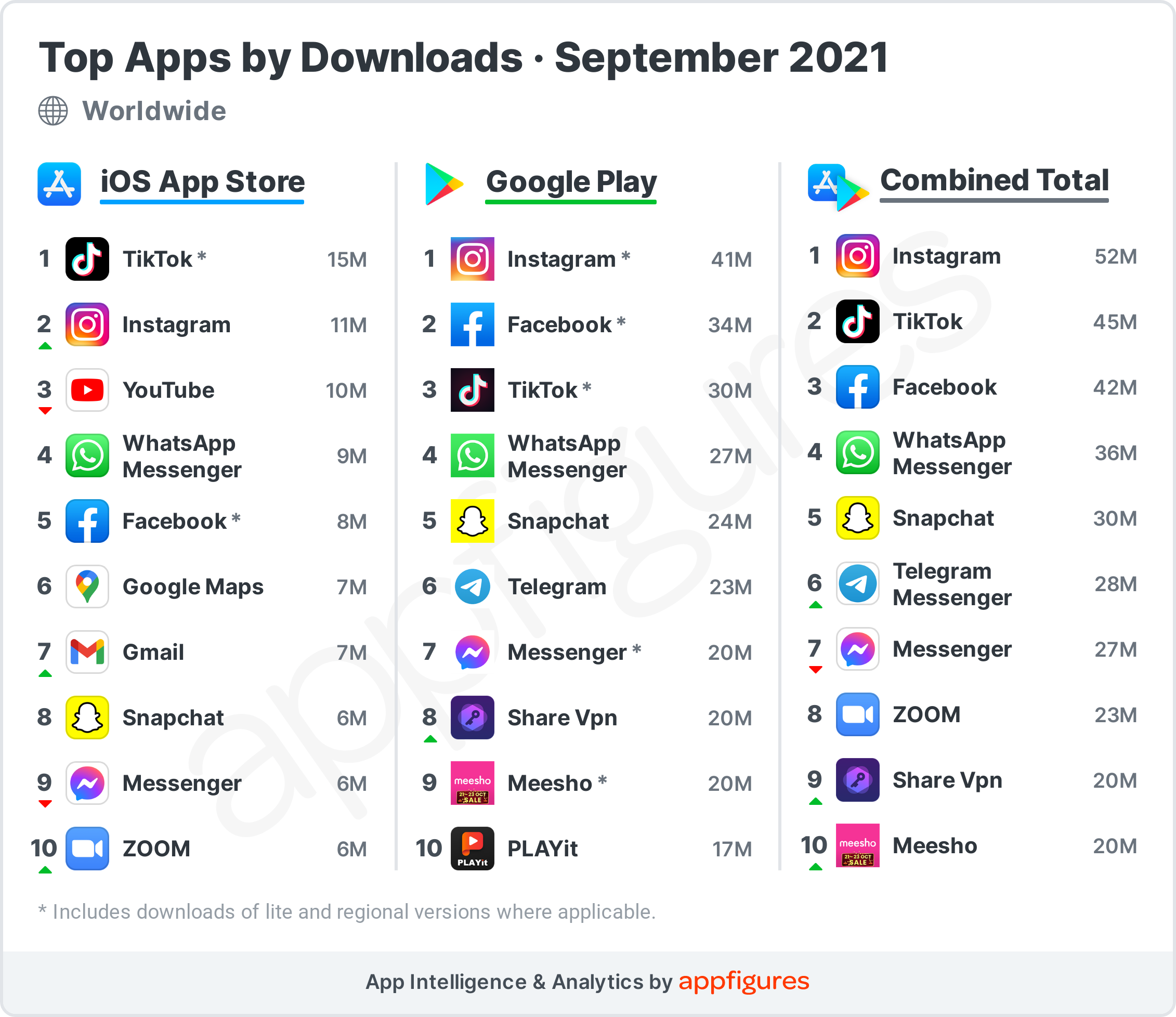 Instagram remained the most downloaded app in the world in September, adding 52M new users in September, according to our estimates. Much of Instagram's growth came from India, which was responsible for around 20M downloads out of the total between the flagship and lite versions. TikTok, Facebook, WhatsApp, and Snapchat were right behind it for a finish that's identical to August.

Share Vpn (their casing, not my choice) was a new entrant into the top charts in September, scoring #9 overall and #8 on Google Play with 20M downloads. The three-month-old app peaked at a little over 800,000 downloads/day for a bit and then started dropping as the month came to a close. The majority of those came from... You guessed it. India.

PLAYit and Meesho made the cut again in September, lifted by massive downloads in India. PLAYit, which was released in 2019, added 15M new downloads from India in September for a total of more than 206M lifetime downloads. Meesho, which has been around since 2017, added 20M new users during the month, for a lifetime total 165M, according to our estimates.

Together, the top 10 apps in the world were downloaded a total of 323M times, according to our estimates. It's a bit lower than August's total, but considering it's back to school for many, this isn't a big surprise.

Intelligence You can Trust

At a price you can afford!

Time to Get Back to Work!

To give you broader insight into the app market we started going deeper and looking at the most downloaded apps in a different category every month. For September, a back-to-school month for many, we chose to focus on the business category: 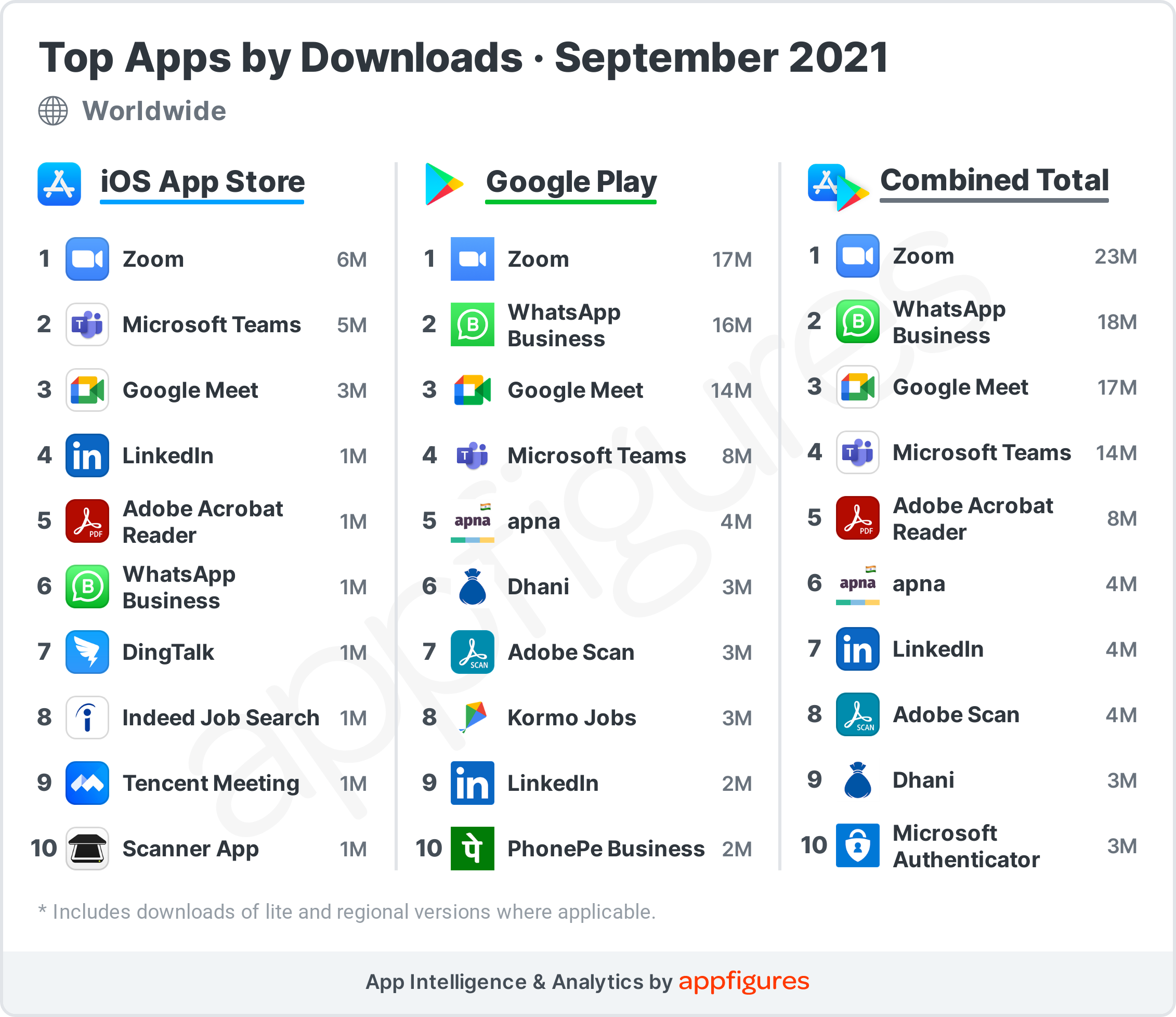 Update: This list was update to correct an error that put WhatsApp Business as #1 on Google Play even though it didn't have the most downloads.

Zoom, yes, that Zoom, was the most downloaded business app in the world, pulling in 23M new downloads from the App Store and Google Play, according to our estimates. WhatsApp followed right behind, and even though it's not "technically" in the business category on Google Play, it is on the App Store, so I pulled it into this analysis. It's called WhatsApp Business for a reason. And, it means business with 18M estimated new downloads in September!

Google Meet and Microsoft Teams which are right behind those two make it abundently clear that video meetings are still red hot. The numbers aren't nearly as high as they were a year ago, but they're still very high considering everyone heard of Zoom already.

The other theme we see here is jobs. LinkedIn, Indeed, Apna, and Google's Kormo are scattered across the two stores, and have together generated close to 10M downloads in September, according to our estimates,

Since we're talking trends, here's one more: India. India is the star of the show giving a wide variety of apps enormous amounts of downloads. You'll notice most of those downloads happen on Google Play and not in the App Store. It's so polarized that many of the apps made in and for india, like Apna, don't even have an iPhone version. But, can Apple's luxury brand do anything about that?

Let's Do It, Let's Fall in Love

Speaking of luxury, while Google Play delivers downloads, it's the App Store that drives revenue! 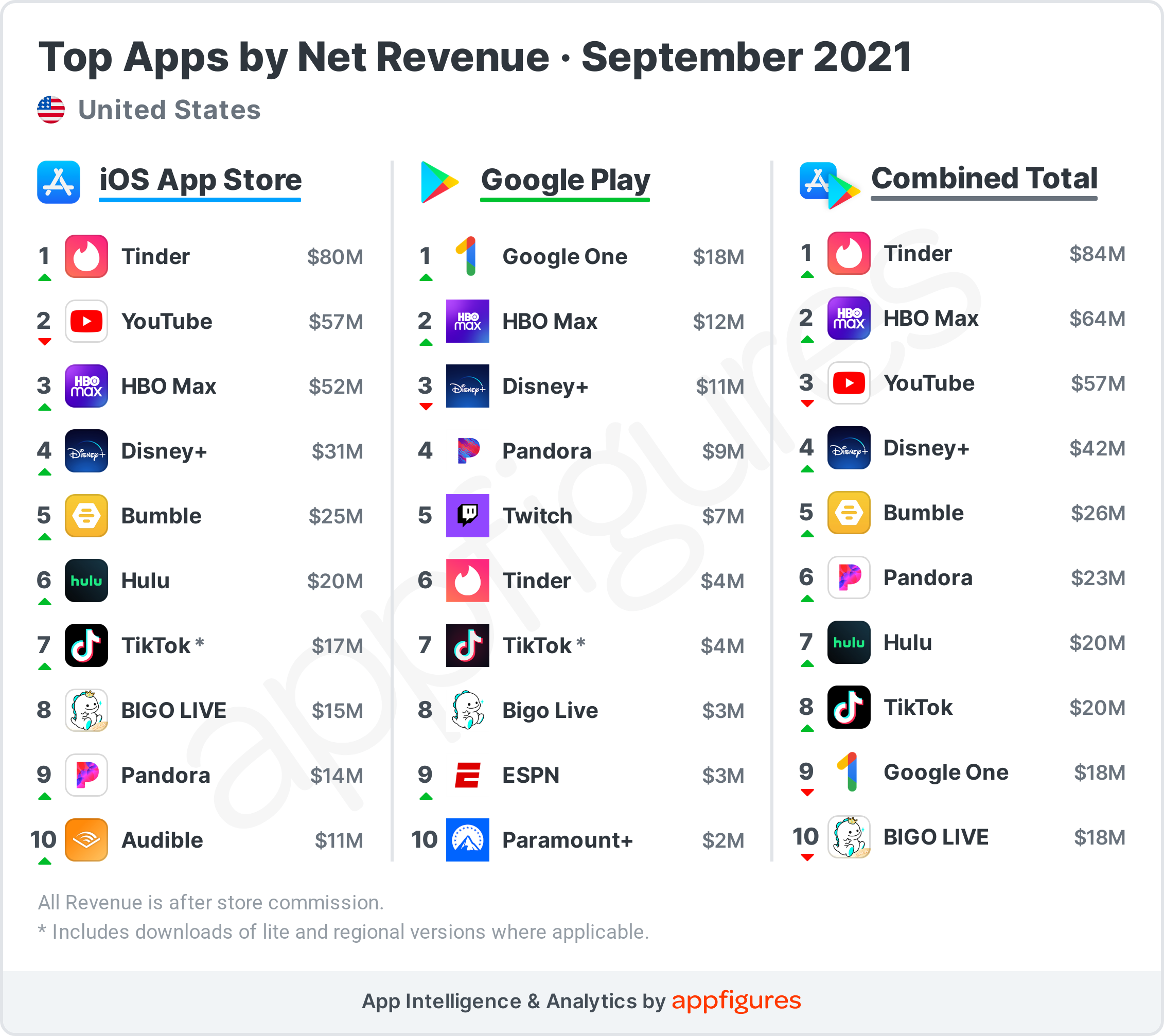 Zooming in on the U.S. (pun not really intended), Tinder was September's top app in terms of revenue. Our estimates put its monthly haul at $84M of net revenue in the U.S., the most it's earned in a single month to date. That's a lot of swiping!

Tinder's move dethroned incumbent YouTube, which has been the top dog for a very long time now. But Tinder wasn't the only app to push YouTube down. HBO Max, my favorite streamer, managed to climb into the #2 spot with $64M in estimated net revenue. Also it's biggest month to date!

While the rest of the list should look pretty familiar, there's one app that's jetting its way up quick. If you've been following the newsletter you'll know which app I'm referring to here. If not, look no further than #8 — TikTok. The one app that's seriously threatening YouTube right now is quickly advancing up the ranks, raking in millions more every month.

I expect it to rise even higher in October and won't be surprised to see if it breaks the top 5.

Together, the apps with most revenue in the U.S. earned $372M in net revenue, meaning after Apple and Google got their fees. It's on par with August's total.