Forget mobile-first. Are you ready for mobile-only video streaming?

Quibi, the newest streaming service, is shaking things up by bringing high production value content to short-form video – putting them in the ring with both Netflix and YouTube. Catering specifically to those on-the-go, each episode maxes out at 10 minutes and is only viewable on your phone.

Coming at a time where many of us are not on-the-go, we’ve been tracking their progress closely to see how this plays out. As their initial figures finally appear to be stabilizing, let’s dive in and see what’s happening.

What Makes Them so Special?

At least two billionaires, most major Hollywood studios, and a number of leading tech companies have placed their bets with Quibi. Here’s some background:

So far, so good. Let’s see how the movie mogul and tech execs are settling into mobile.

On the App Store, Quibi secured the #2 place behind TikTok in Entertainment. Not a bad placing considering TikTok averaged twice the number of downloads as Netflix, over the last 60 days.

As the week progressed, Quibi dipped on the App Store but made solid gains on Google Play, where they’ve locked in the #1 spot. 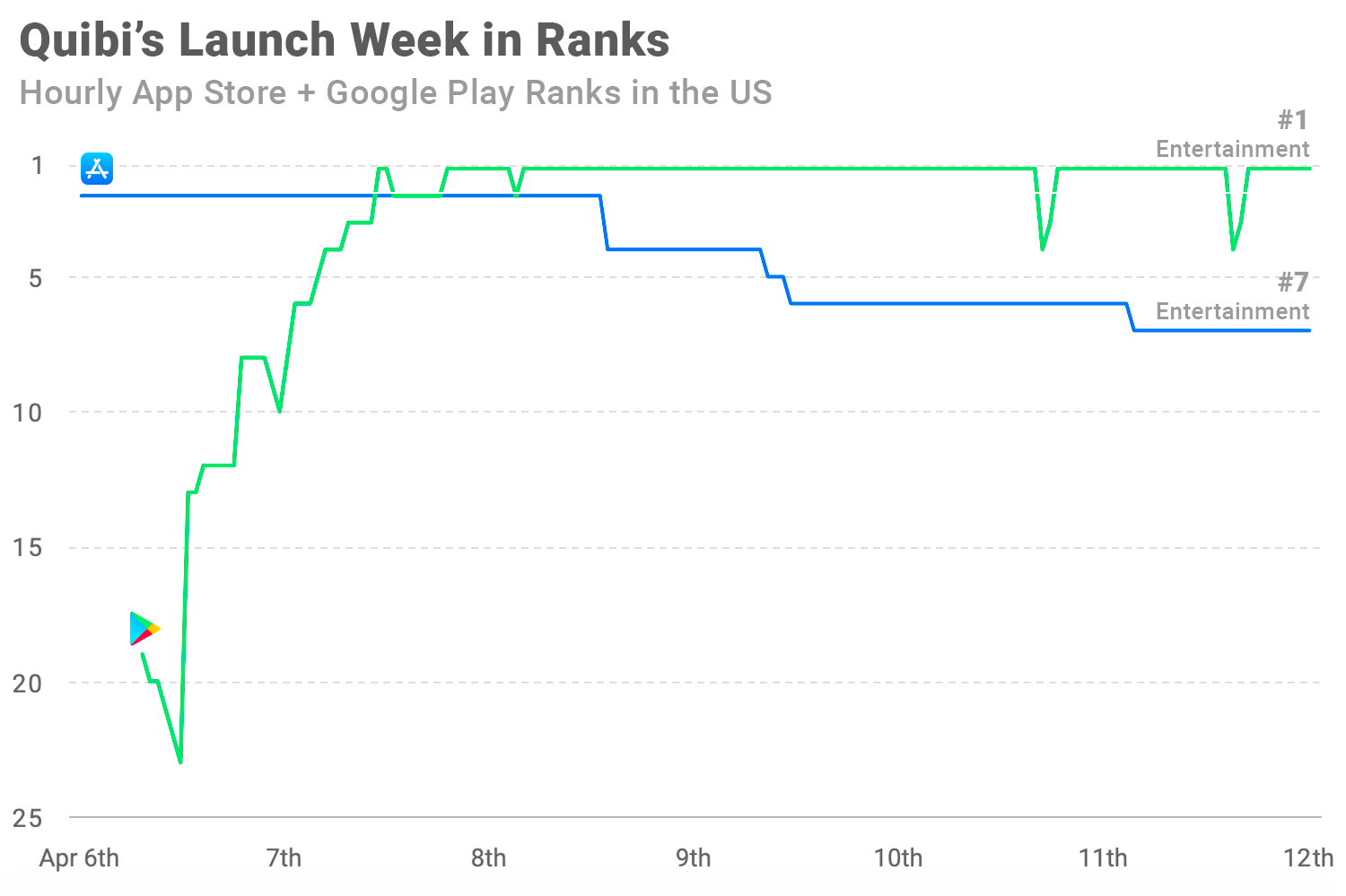 Strong Start on the App Store, Then Settling Lower

These movements were reflected in downloads with a solid start of 126k downloads on launch day, then settling at roughly 40k per day through Thursday and Friday. 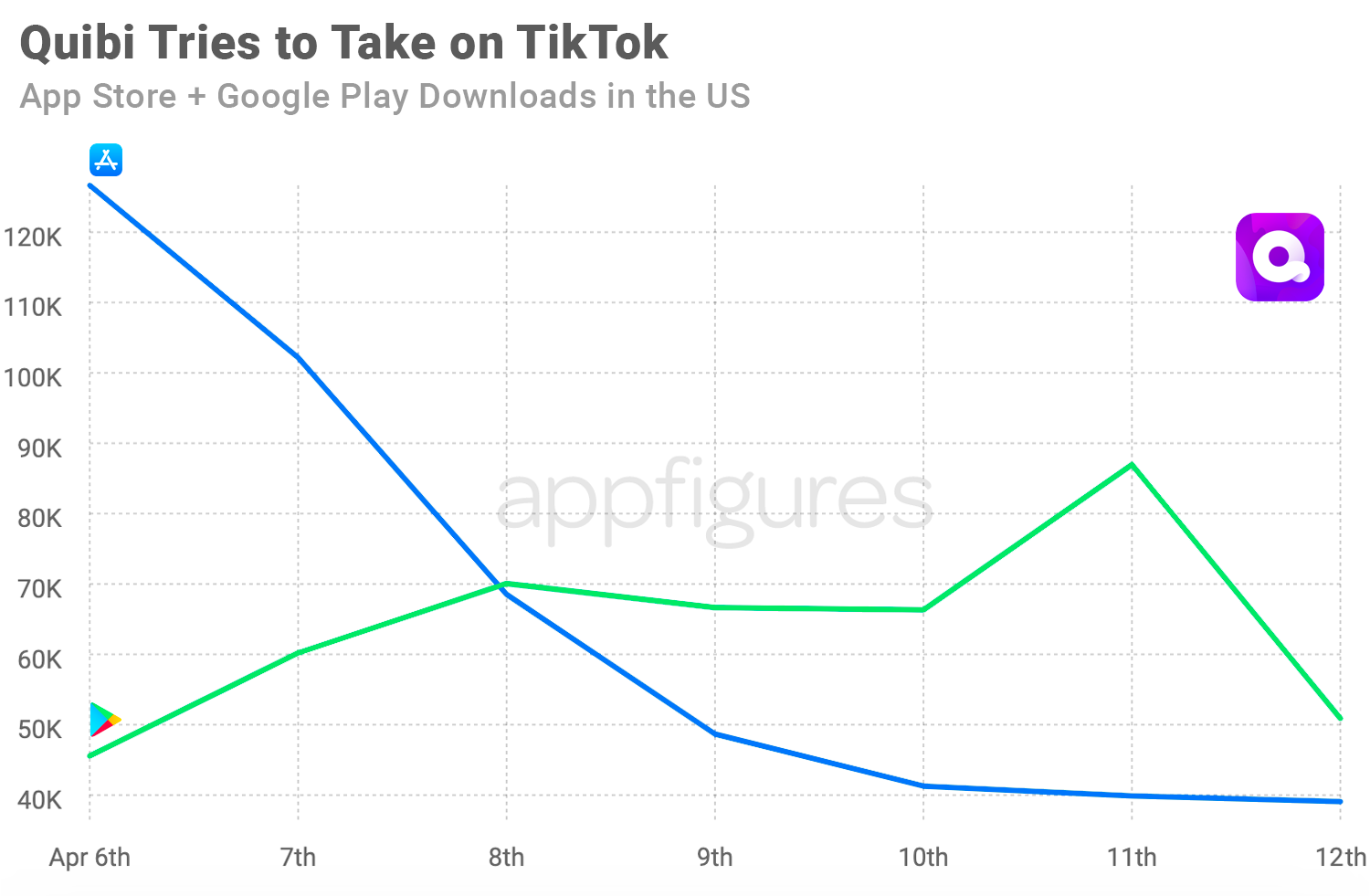 The dip in App Store downloads was balanced out by strong growth on Google Play, leading them to end the week hovering around 100k - 110k downloads per day across both stores.

Keep in mind - Quibi opened for a lengthy pre-sales period starting January 30th. Using a technique that is typically found in gaming, this allowed them to harness signups as they pumped a massive amount of pre-launch advertising dollars into gaming platforms, Youtube, and even a Superbowl Commercial.

The Impact of COVID-19

Those tracking market movements with our Mobile Download Index have commented on dips in commuter-dependent categories such as Travel and Music. At the same time, we’ve been hearing similar things from podcasts - reporting slowdowns in audience growth.

While many expect this to recover, it suggests that Quibi’s (pre-scheduled) release of an exclusively mobile platform (i.e., single-user accounts; only one stream allowed at a time; almost no availability on non-mobile platforms; and, no casting capabilities) comes at a time where the value prop is a little hazy – at least on the experience side.

Competitive Analysis: Quibi vs. the Giants

As a new player without an established brand or well-known flagship series, Quibi definitely has their work cut.

In one corner sit the multi-platform, high-production SVOD giants like Netflix, Hulu, Amazon Prime, and Disney+. In the other, we have YouTube, master of short-form video, and host to a homegrown crop of YouTube stars. And, don’t forget about the many networks who offer their own streaming options.

Is it fair to measure Quibi against the likes of Disney+, a hundred year old behemoth sitting on some of the most recognizable brands and entertainment franchises of all time? Maybe not, but this is the market they chose to compete in, so let’s see what they’re up against.

In their first week on the App Store, Quibi kept pretty good pace with their top five competitors. Honestly, it would have been a red flag if they didn’t. 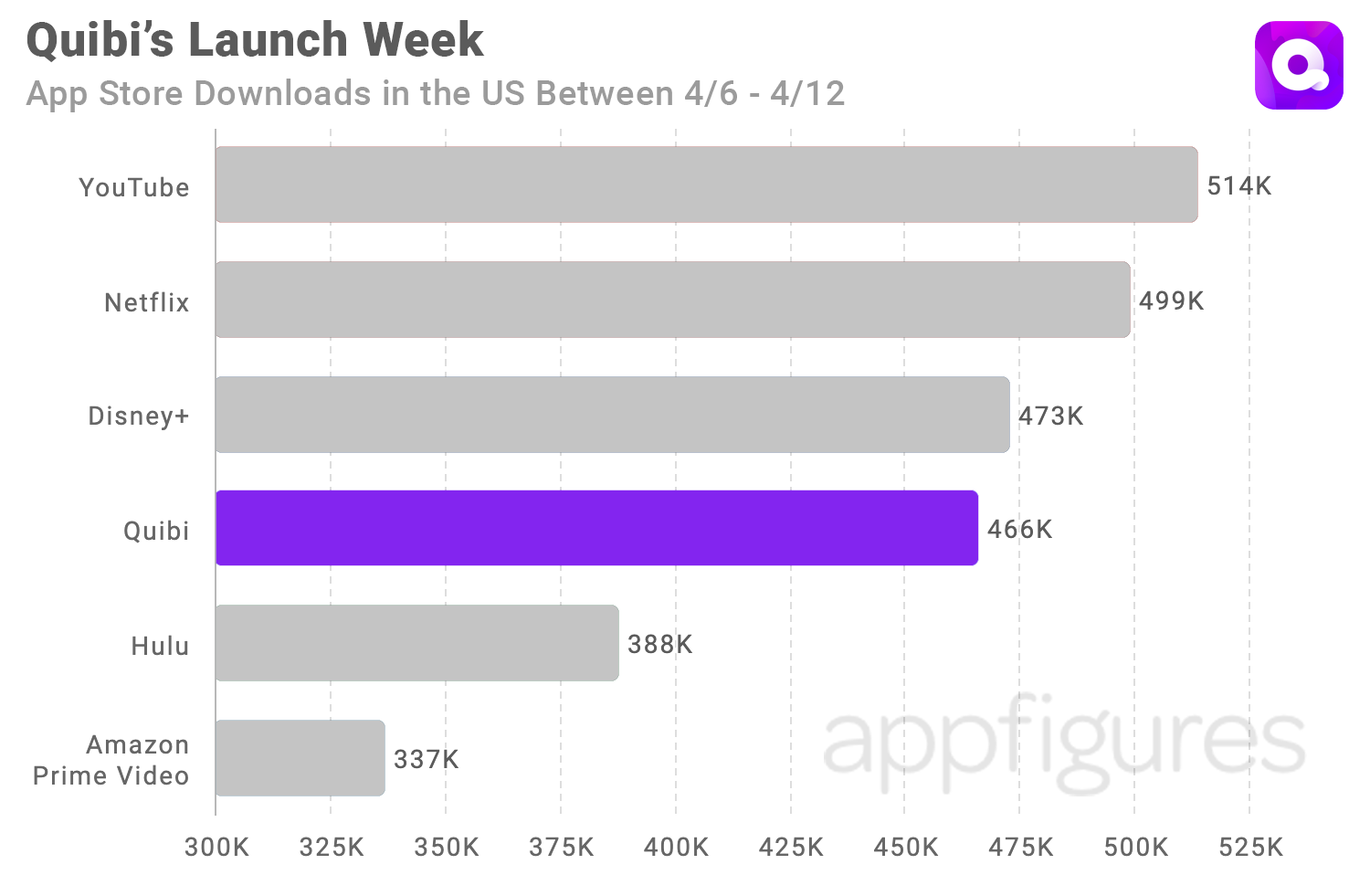 By end of week one, they were capturing about 10% of daily downloads against the same group. Not bad.

On Google Play, Quibi ended up outperforming all of their peers in the first week. 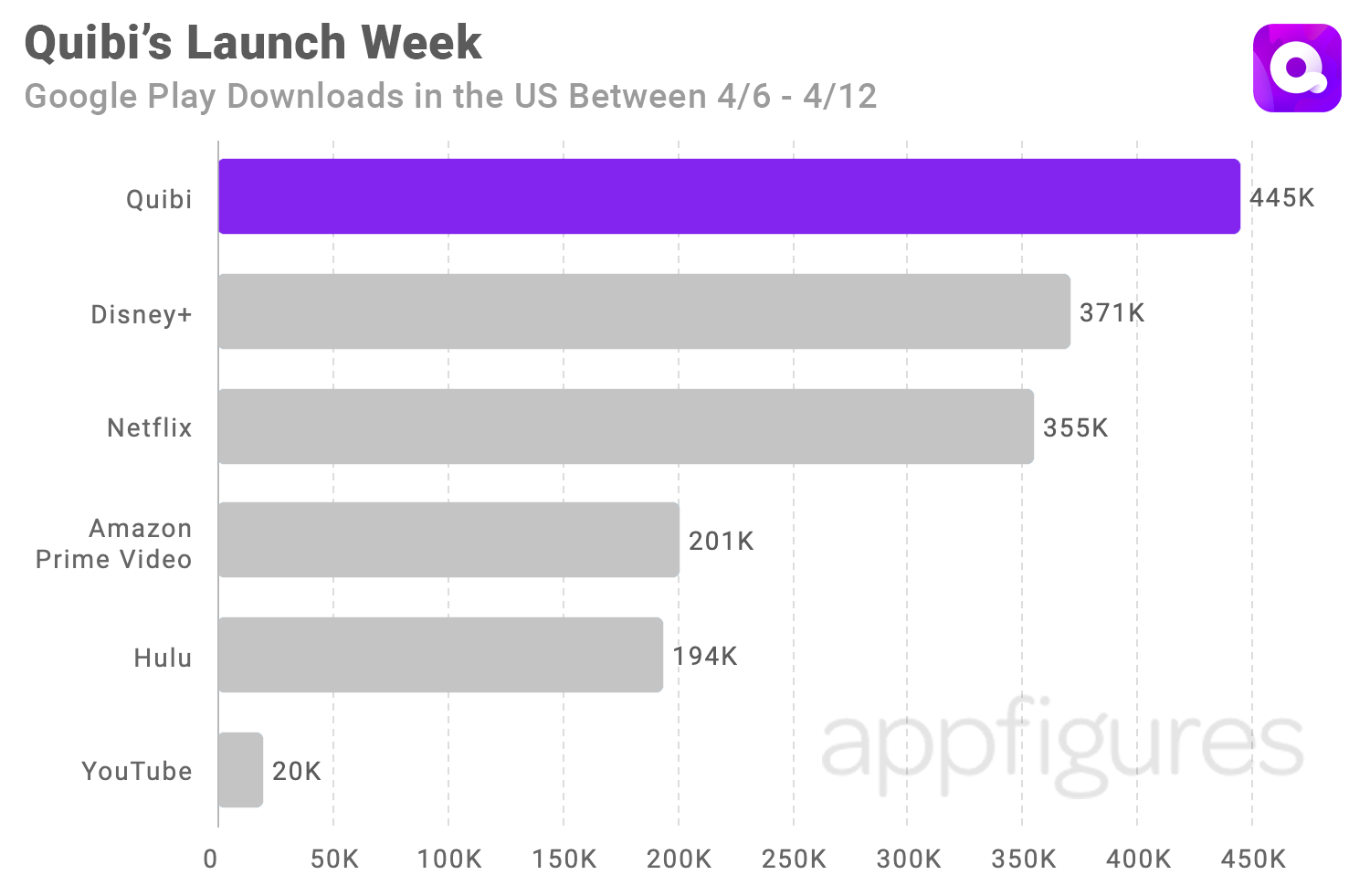 All in all, a pretty solid first week. Quibi is moving into a very crowded space, but by competing on both ends, they’re also in a unique position to win viewers from both groups. With an all-star team and content lineup that looks great on paper, now the race is on to acquire users.

What We’re Keeping an Eye On

There’s still a lot to be seen. Going forward we’re particularly interested to see how they manage these challenges:

In short, Quibi’s future has not yet been written (speaking of short - Quibi is short for quick-bites). What else do you think we should be watching as they prove themselves in this space?