2022 has been an incredible year for streaming apps, but it was very different than the two years before it. Between the end of covid, lots of sports events, and movie theaters regaining momentum, demand for streaming apps is bound to change – and it did!

In this report we're going to look at the streaming apps that grew the most in 2022, the apps with the most downloads, and we'll wrap it up with a monthly view of the entire industry. Feel free to skip around.

Note: All of the data in this report is focused on the US because some of the streamers aren't available in other countries.

2022 was a great year for Peacock, NBC's streaming app that launched during the pandemic and got momentum by streaming The Office.

We analyzed the top 10 most popular streaming apps in the US in 2022, and Peacock was the streaming app with the most growth, 62% YoY.

Peacock's rise can be directly attributed to sports. In 2022, Peacock streamed the Super Bowl, the Summer Olympics, and wrapped up the year by streaming the World Cup. What an amazing trifecta for the streamer that didn't see that much love in 2021 (5th by downloads).

Here are the rest: 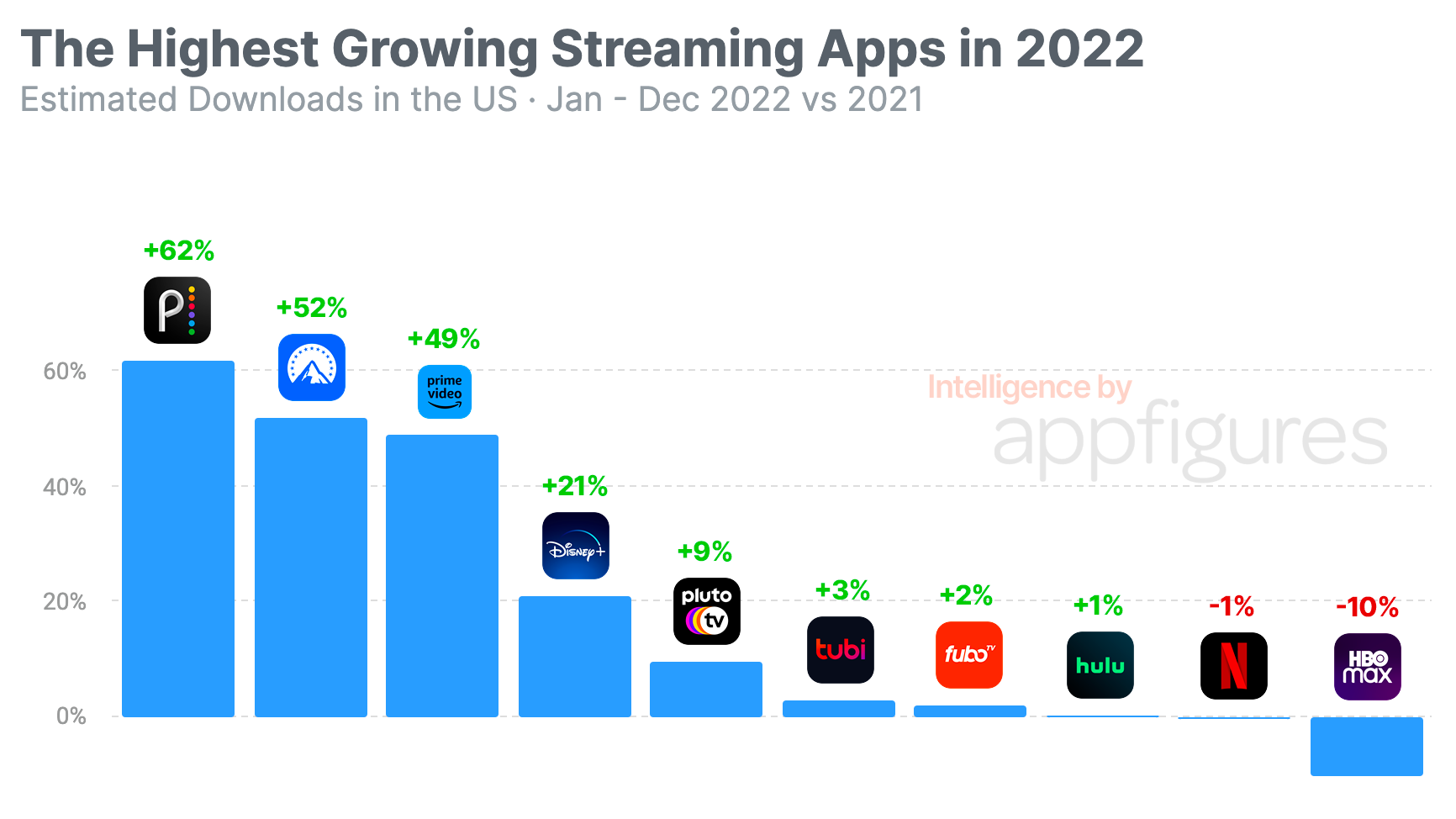 Paramount+, a fairly similar streamer, came in 2nd in our ranking, growing 52% YoY. Paramount+ pushed content hard, including exclusives, and grew both downloads and revenue.

Amazon Prime Video, which grew 49% in 2022, is another streamer that was almost invisible in 2021. It lacked content, and its clunky app was easily ignored. But that changed in 2022 with the introduction of the James Bond movie and Lord of the Rings.

Did you notice that the top 3 don't include any of the big names from 2021 like HBO Max and Disney+?

Disney+ came in 4 in 2022, growing 21% in the US. Although not as high as other apps, Disney+ had a challenging year. It grew well outside of the US, but the balance it tried to strike between streaming and theater releases didn't do it much good. Especially not earlier in the year.

Let's skip the smaller streamers that grew a bit in 2022 and skip right to the end of the list, which is... interesting!

Netflix, the original king of streaming who got into games, had a bad year. New downloads went down YoY, losing roughly 1% of downloads vs. 2021. And it wasn't doing all that well in 2021.

But the real surprise here is HBO Max, which dropped a whopping 10% in 2022 vs. 2021, and if you ask me, the difference comes from the lack of new/original/exciting content. While the downloads are still massive, HBO Max managed to barely sustain them and not grow them.

Competition from smaller players really hurt overall, and it feels like HBO Max is in a bit of disarray after the merger with Discovery. But don't let this drop fool you, HBO Max is a powerhouse that understands content. I'm sure that once the merger is done with, content (and downloads) will return.

Growth is a great way to understand the changes in the industry, and wow, those were interesting changes. But. Lots of growth doesn't (necessarily) mean lots of downloads. Unless you're Peacock...

Peacock was also the most downloaded streaming app in the US in 2022. The trifecta helped it take the lead from family-friendly Disney+, which managed to beat HBO Max for the first time. 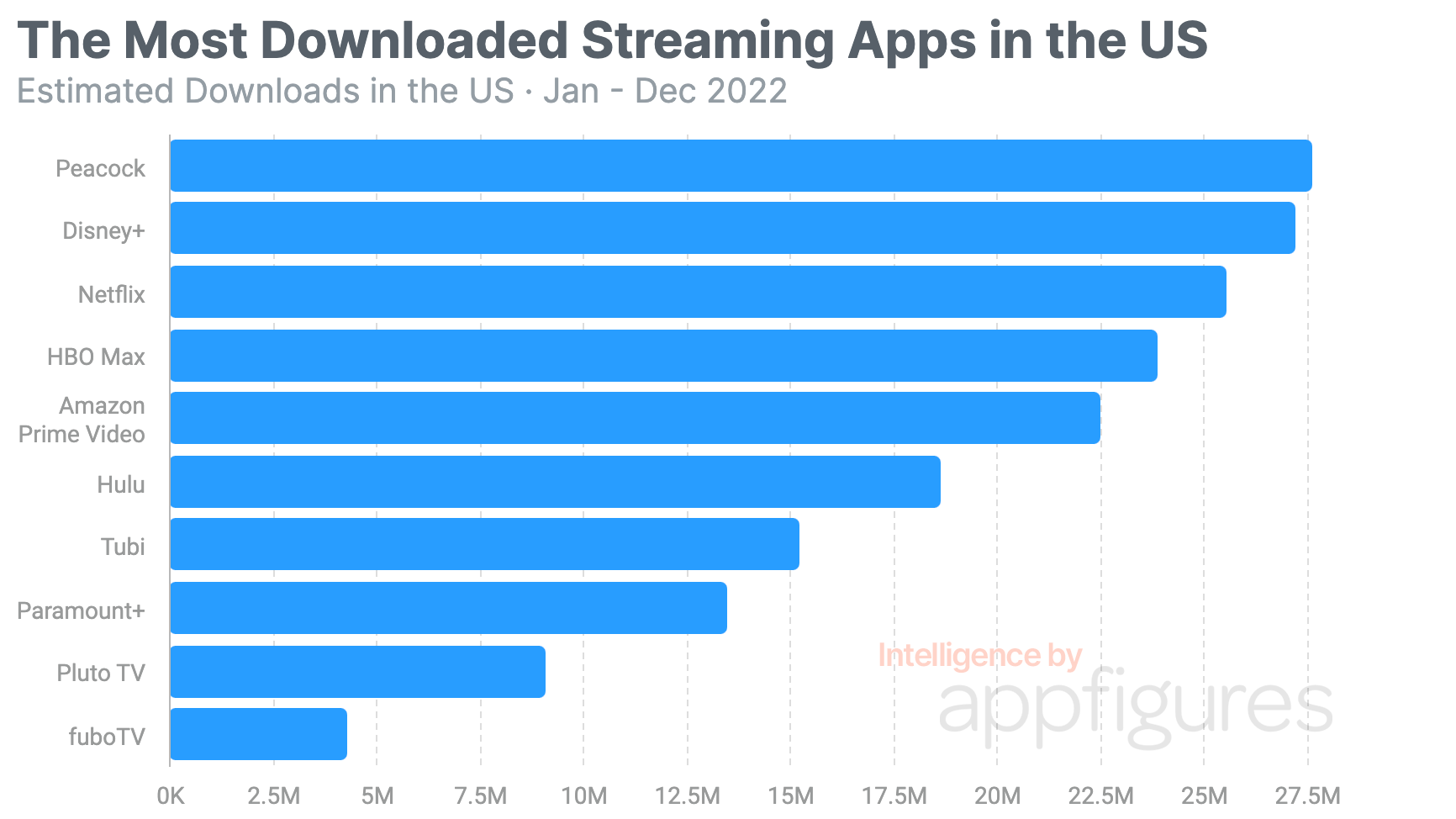 The difference is fairly small. Our estimates show 27.6M vs. 27.2M downloads, about a half million downloads for the year, but still significant considering Peacock doesn't have the recognition Disney+ does.

Netflix and HBO Max were the 3rd and 4th most downloaded streaming apps in the US, adding 25.6M and 24M downloads, respectively, even as both saw demand drop into the negatives in 2022. Growth or not, they're both household names and that maintains momentum while exciting content is... sparse.

Paramount+, which was 2nd by growth, ranked 8th by downloads. It ended the year with roughly 13M downloads, according to our App Intelligence, a whopping 52% increase from 2021.

"Small" streamers grew consistently in 2022, but the growth didn't happen all at once. To wrap up the report, here's what demand for the streaming collective looked like by month this year: 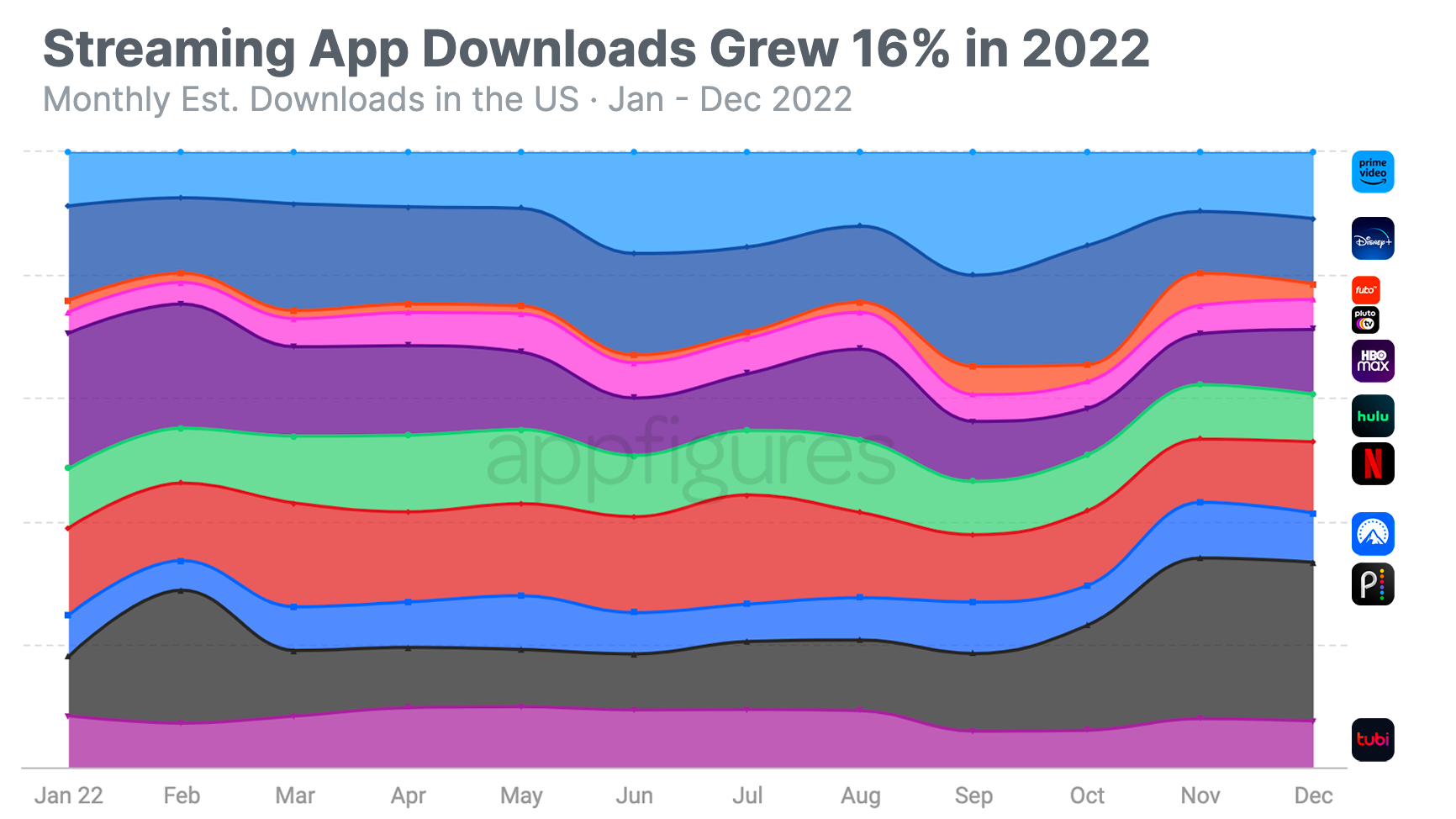 The chart makes the trend pretty obvious. Disney+, HBO Max, and Netflix started the year strong but, over time, dwindled as "smaller" streamers took over.

While these streamers aren't necessarily competing over content, especially considering exclusives and sports, video makes them all competitors over users' viewing time. You can't watch two things at the same time. Maybe you can, but most people don't.

I foresee this trend continuing into 2023, giving rise to the "smaller" streamers and potentially newcomers who want to join this adventure.

Unless, and there's a way for the bigs to make a comeback, the popular names focus on content as they did in 2020 and early 2021. That won't be as easy now that everyone isn't stuck at home, but certainly possible, considering a lot is done in-app as a result.