If you look at enough search results, you'll inevitably come across a keyword (or 6) where the results make sense at the top, but as you start scrolling, they seem to become weirder and weirder. Once you analyze those, though, you'll see they follow the rules just as well.

Podcasting has really taken off in 2021 thanks in part to Spotify and Joe Rogan, but also thanks to the endless amount of content that's available and doesn't require starting into a screen. Although Apple has an app that's built into the iPhone for listening to podcasts, it's not the only option. I analyzed one of those a few months ago, and in this teardown we're going to look at the keyword, but go a bit deeper. 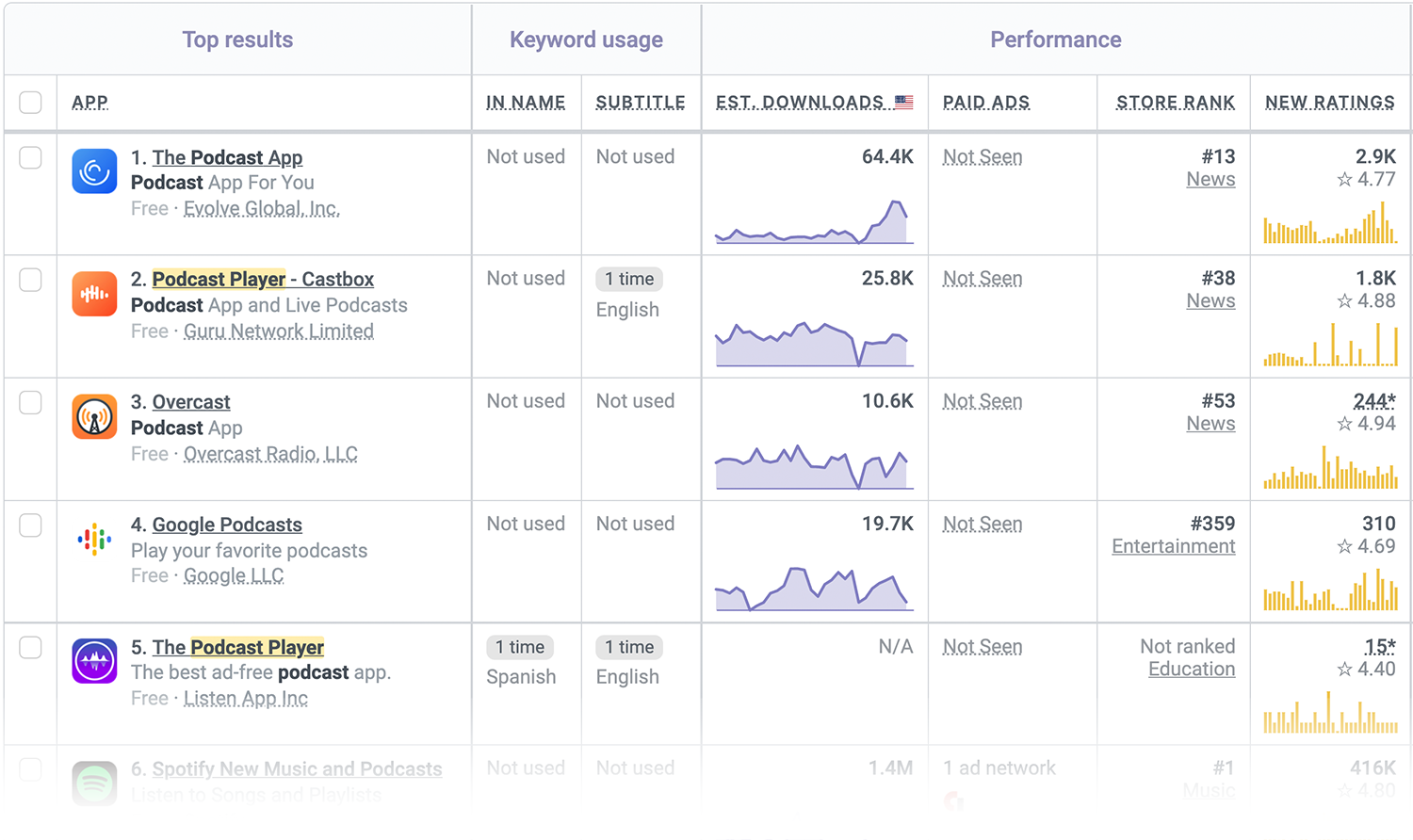 The Podcast App is the top results, and it's there because it leads in terms of ratings even though it isn't using the full keyword in its visible metadata. But the ratings + having the second half in the invisible keyword list (and likely early on) give it the force it needs to rise to the top.

FYI - I've noticed a shift after iOS 15 where the keyword list is getting more love from the algorithm. I'm not sure how much more than before, but it feels like it's more important. So, make sure you're treating your keyword list well.

Right behind it is Castbox, and Castbox is doing a great job because it puts the keyword right up front and managed to get to the top of these search results with fewer ratings than the top app. But it can do better. Can you spot the error here?

Yes, it's the duplication between the name and the subtitle. Without it, the results could be better. And there's not much better than #1.

Here's where things start to get weird.

At #3 we have Overcast, which manages to amplify its couple hundred ratings by having such few keywords in its name and subtitle that there's really nothing else for the algorithm to see. I have a feeling this isn't by design, but it's an interesting strategy to employ.

The thing is, it limits the reach this app can have. So if you want to try this, make sure you do your keyword research right and place as many relevant modifier keywords in your long description.

And in 4th we have Google, the app you'd expect would rank higher but doesn't have the word "player" in its visible metadata and also has much fewer ratings than what I expected. But then again, why would you download Google's podcast player on your iPhone? I have a feeling the name here isn't enough to battle Apple's built-in app or any of the more feature-rich 3rd party apps.

The Podcast Player, in #5, is a great example of almost doing things right. Look at that name, it's the keyword. And that's why it's even showing up in the top 5 with just a handful of ratings. But... it's also duplicating. So it can do better.

FYI - I draw the fold line at 5, which is pretty arbitrary but is as much the target line as it is where I think attention drops off like a cliff.

Right below the fold we have Spotify. Yup, Spotify is also in this list and isn't at the top. That's because it doesn't have the word "player" anywhere in its visible metadata. But it's weird because it has so many ratings that this would only indicate it's not using the word "player" anywhere in its keyword list, and something about that feels wrong to me.

I don't know if that's the case or not, but I do know Apple and Spotify aren't the best of friends. I wouldn't be too surprised if that has anything to do with it.

Stitcher, in #7, is the first app that only leverages the subtitle to rank. That's exactly why it's below the fold. But wait, it's also got "podcasts" in its name! It does, but it's a duplicate. Those are no good...

In the 8th spot we have iHeart, which is running an error counter of two by duplicating and not including both parts of the keyword in its visible metadata. The first one is the bigger issue, so that's an easy fix. Including "player" in the name or subtitle is more of a brand choice, considering the type of app, which is a much more challenging one for any ASO (App Store Optimizer).

Branding and keywords don't always align, and that can create a dilemma. But, ultimately, it's all about visibility. Keep that in mind.

Podbean (which is what we use for our podcast) repeats too many things too many times, and in doing that, it isn't just devaluing it but also reversing the order of keywords, which we've seen isn't great. Both are easy fixes...

Last is Pocket Casts, which seems to be doing an alright job having a lot of focus but just doesn't have enough ratings to compete. Our estimates show quite a few downloads, which means it can get more ratings if it really tired.

It's worth a try!

Getting "above the fold" starts with proper keyword research and correct placement. One thing's clear: duplication isn't good for business. But, you should know this by now.

#41 - The Secret to Generic Keywords

App Store Optimziation for games is a bit different than for apps, but when it comes to ranking, the same rules apply.