App Teardown: A Look at the Most Downloaded Podcast Player

Podcasts are making a comeback, thanks to companies like Spotify who see it as a more efficient way to own content. Who gets to benefit? Everyone! From creators who have a growing audience to podcast players who can offer better features than the built-in solution from Apple, like getting a notification for a new episode. Right?

In this App Teardown, we'll be analyzing the ASO of the most downloaded podcast player in the U.S. App Store, what it does right, what it doesn't, what it can do to improve, and best of all, what you can take away to improve your apps.

Overall, I give The Podcast App a B+

The Podcast App by the Numbers

Here's how The Podcast App is performing in the U.S. App Store, based on our Competitor Intelligence:

Podcasts used to be big a few years ago. Maybe just in some circles, but still big. It's at that time that podcast players started becoming popular. Over time, however, podcasts were glossed over for other channels. That's all changing now thanks to the popularity of some podcasts from Joe Rogan, Michelle Obama, and many other familiar names.

We can see, however, that the demand for podcast players is still on a downward slope: 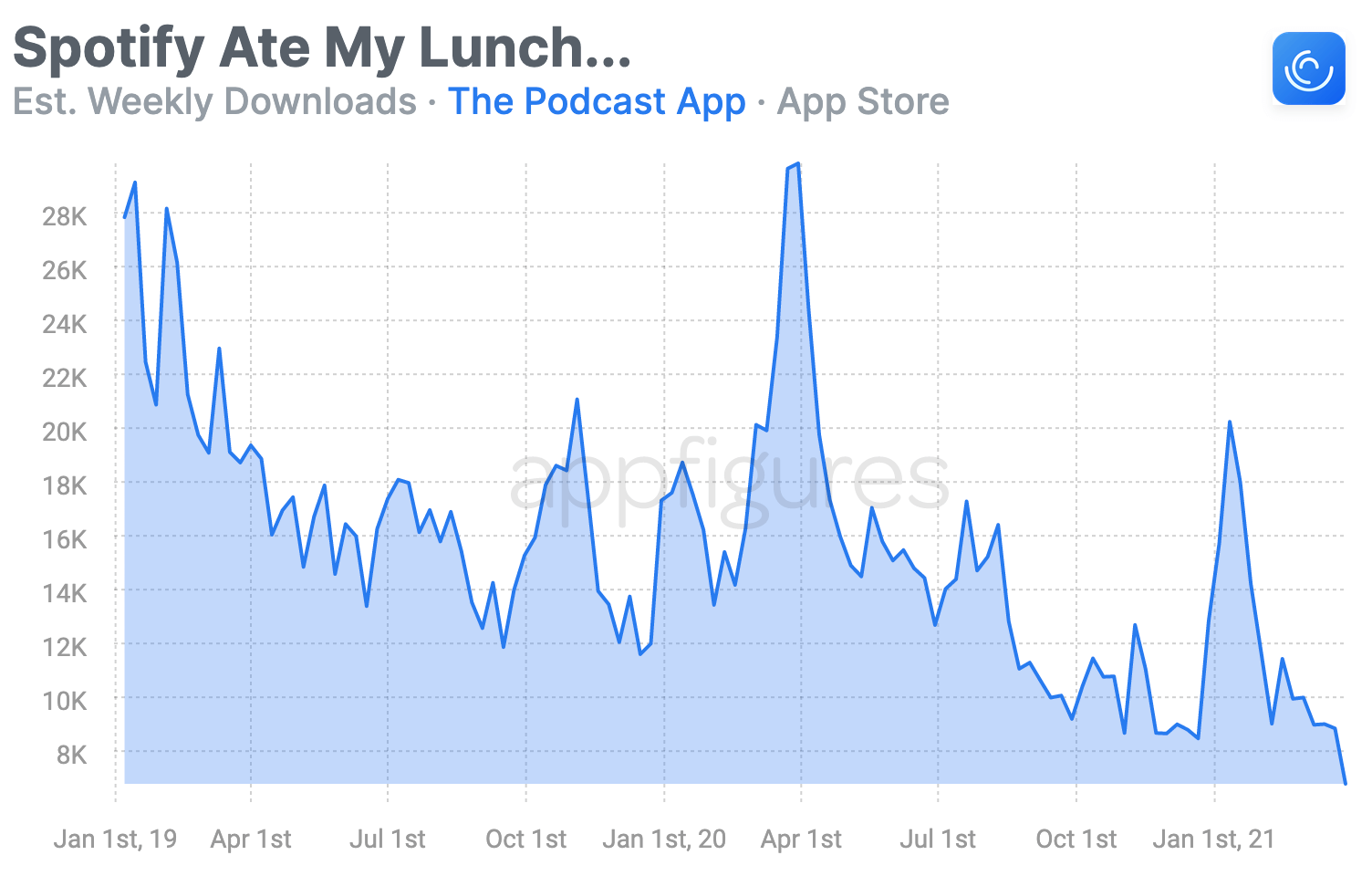 Downloads of this particular player, which happens to be the most popular one, yes. But that's because podcasts moved to a new home, the one that's been pushing for their popularity, and that's apps like Spotify and its music streaming rivals.

While this may seem like an 800-pound gorilla about to demolish podcast players, I see it as a massive opportunity to provide an amazing experience that those big guys can't.

The Podcast App vs. the Competition

Podcast players compete on two fronts, against music streamers, like Spotify and Pandora, and with other players. Since The Podcast App is a player, I've omitted the former group in this analysis. 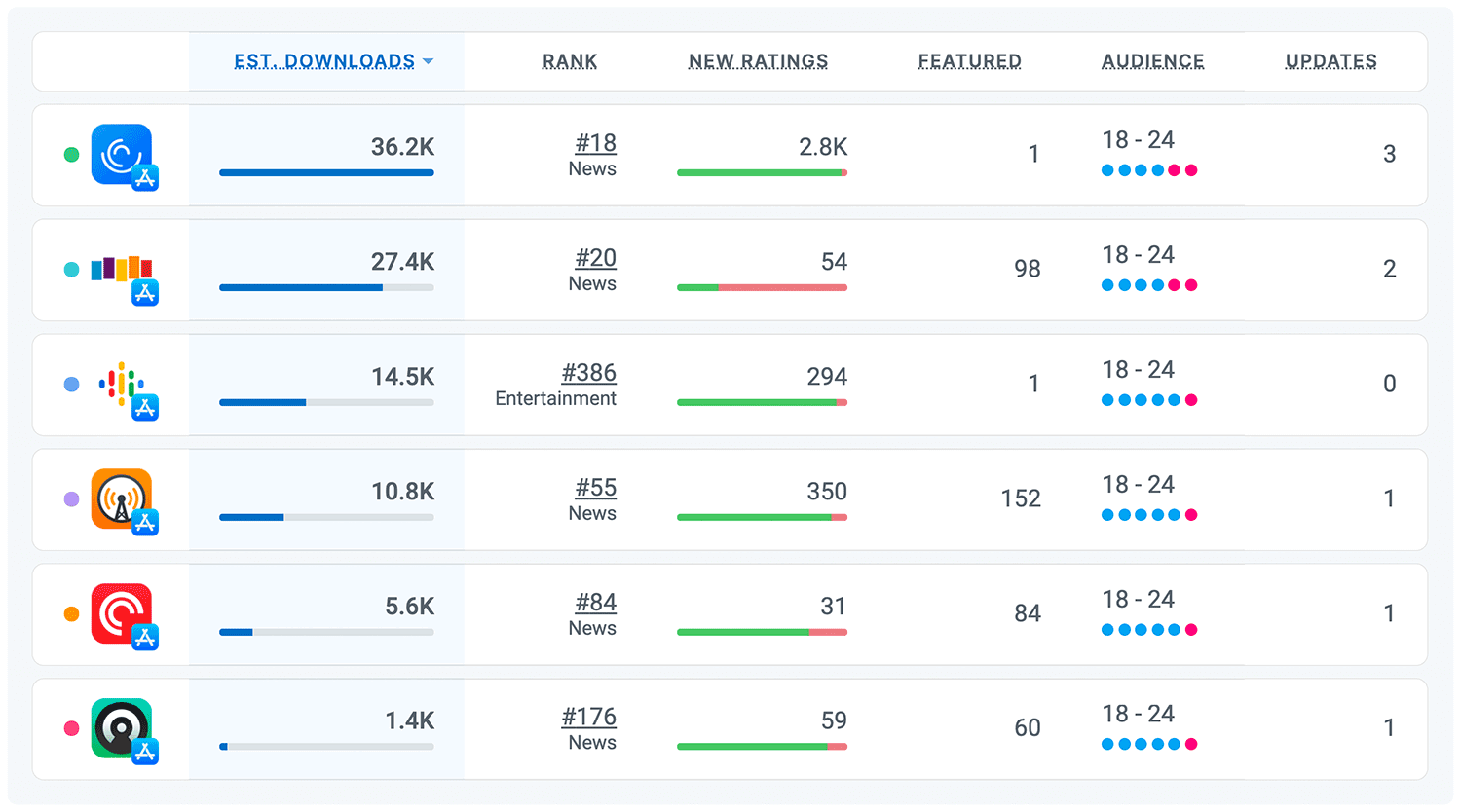 The market for podcast players isn't as large as some of the others we've covered recently, but it's also not small, and comes with a few biiiig names, including Apple and Google.

Competing with an Apple-owned app on an iPhone is not fun, but obviously doable, as you'll see below. The trick is to beat every other competitor first.

With the most downloads in its group, more than double those of Google, The Podcast App has a solid advantage. But, downloads are not the only component required for ranking higher on the App Store, which is why The Podcast App needs to really fight to keep its advantage.

How is The Podcast App Found?

Now that we have some context let's take a look at The Podcast App's ASO results. To do that, we'll go right to the numbers, which in this case means the number and quality of keywords the app is ranked in right now.

We can find the list of all the keywords The Podcast App is ranked in right now in the U.S. App Store in the Discover Keywords report, which with a filter to kick out the extremely unpopular keywords (popularity=5), looks something like this: 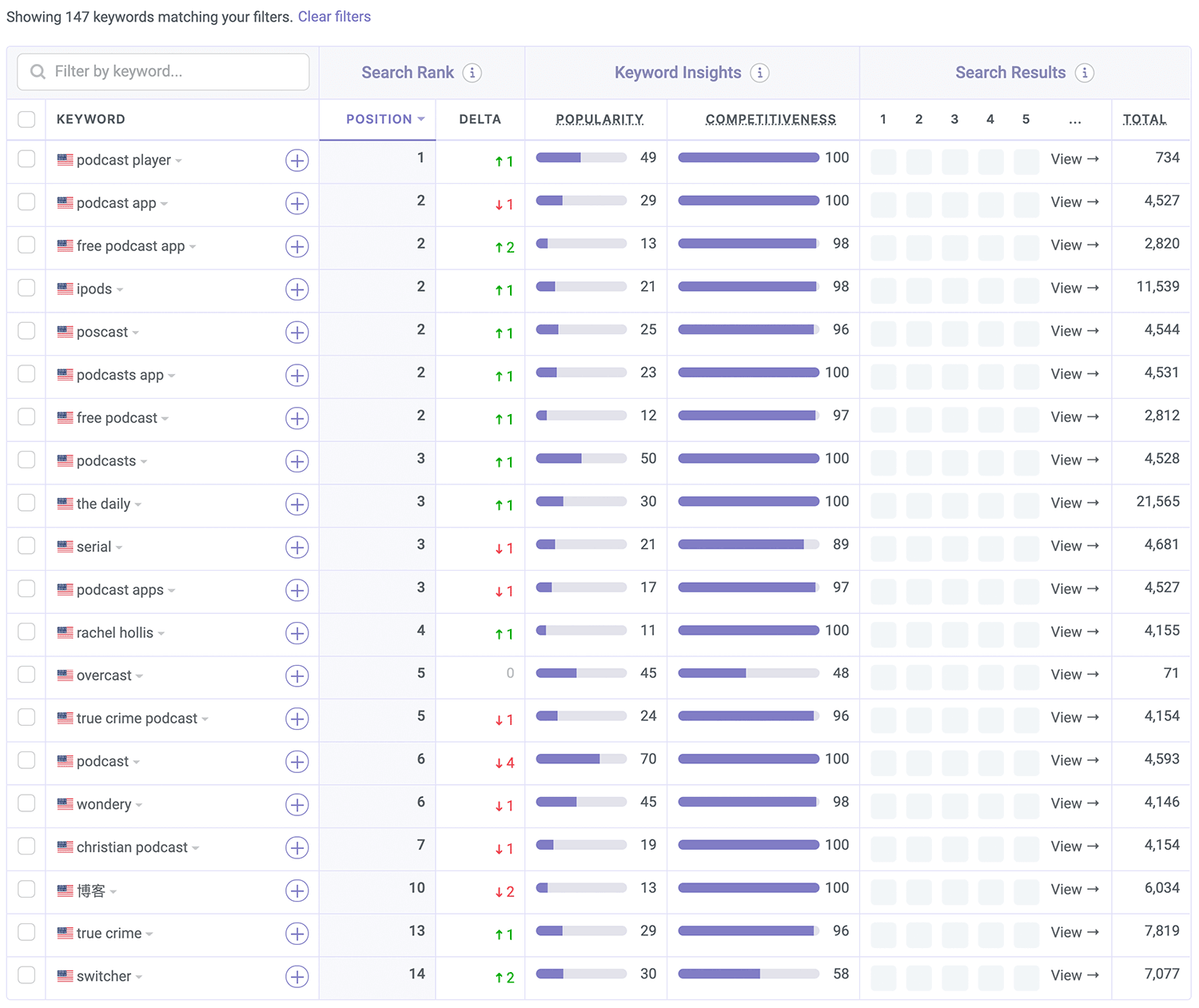 Only one #1 result, podcast player, but it's a very good one with a popularity of 49. The few 2nd and 3rd places aren't bad either. Once we dip below that, we lose most users, so even though there's a good number, they aren't that relevant for the most part.

Why doesn't The Podcast App rank for its own brand name, you might ask? Well... it doesn't really have one of those. It opted for a very generic descriptive name instead of a brand, which is a good move if you're really going for ASO, but it also means word of mouth is less effective and that there's no brand momentum.

I generally think generic names are a mistake for long-term growth, and you can see how much of a challenge it's presenting.

Let's dig in by looking at the keywords The Podcast App is targeting in its name and subtitle. Those two send the strongest signals to the App Store's algorithm.

Ummm, yes, those two. Yup. And I'm being generous with the second one...

Repetition + using keywords the algorithm ignores, like "the", lands The Podcast App in a very bad place.

This is painful to watch. I really hope the keyword list makes up for this.

This one's interesting. It's not as bad as the name/subtitle combination, and has some potential. This is why The Podcast App is still discoverable on the App Store.

It may look like these are all over the place, but here's what I think the motivation was behind this list:

That's a great strategy, and it's really saving The Podcast App here.

Getting this "right" isn't easy because 100 characters aren't enough to really target all of these. But if you remember from previous Teardowns, the algorithm doesn't forget, so with enough iterations over time (aka changing the list), you have a chance at really growing your coverage.

The key for a strategy like this is to have the proper name and subtitle first, so if you're aiming for a broad reach, make sure you have a good base.

If you're looking for a way to squeeze the most out of your keyword list, make sure to check this guide: How to Optimize Your Keywords List in App Store Connect

The Podcast App does a pretty good job with its screenshots. There's no video, but none of their competitors have one either, so it's par for the course. 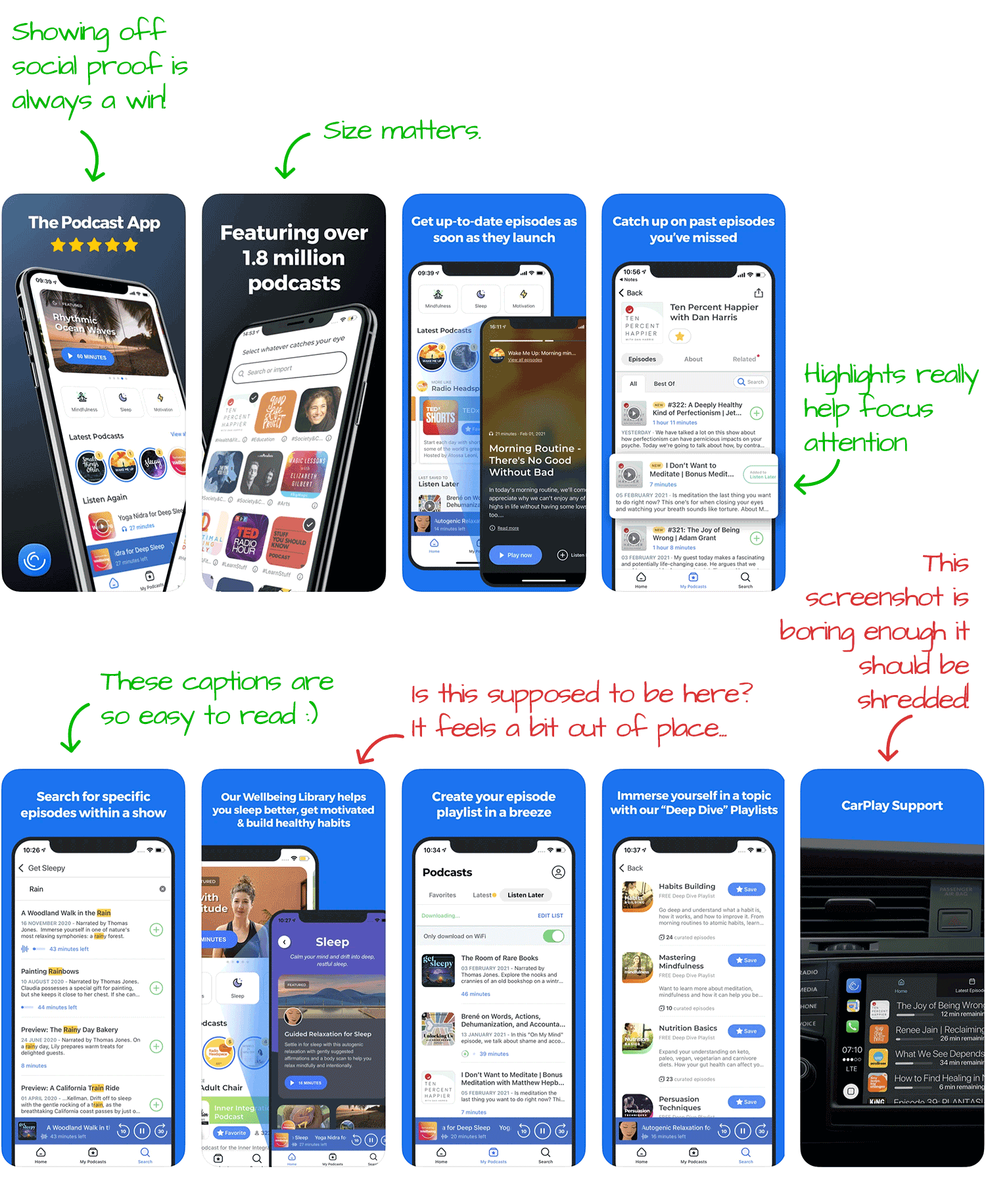 I see a bunch of good things here that are fundamental to making downloading the app a no-brainer:

There aren't many things that can be improved, but here's what I would do

What Data is The Podcast App Collecting?

In this new(ish) section, we look at the privacy labels apps declare on the App Store. The Podcast App is collecting what seems t be pretty standard:

It's a lot, overall, but if we take a closer look, it's almost certainly the result of one analytics SDK (actually, a few, as we'll see below).

Is it bad? Not entirely, but I do see a potential issue.

Location tracking has been in the news for a few years now and has generated a good amount of negative attention. Unless you absolutely need the user's location, it might be worth considering not tracking that right out of the device.

Is this really a big deal? It depends on your audience. To some, this is a huge violation of privacy, others wouldn't even notice. When you make the decision, it's best if you know who your users are so we can weigh that against the benefit of having location data.

Here are all the SDKs and APIs we see powering The Podcast App:

These are fairly standard, and many apps that are being worked on actively and also promoted have installed. The combinations of analytics, attribution, and communication (like live chat) means, however, that things like location will be needed as well, and that can turn a potential user away from downloading the app.

The odds of that happening today are not high, in my opinion, but Apple's push for transparency means they'll continue to promote this type of behavior, and eventually, the odds will rise, and this will become critical for ASO, so it's important to keep in mind.

The Verdict: Thanks Spotify!

Podcasts are making a comeback, which is a blessing for The Podcast App and its competitors. The push for podcasts, which I attribute to Spotify wanting better ways to own exclusive content, is really free promotion for podcast clients that will benefit from the popularity of podcasts while not having to worry about the content itself, like Spotify.

But, where there's opportunity, there's competition. Apps like The Podcast App already have an app, a brand, and an established presence, which is a great head start over any new competitors. They can't sit on their laurels, however, as we can see by the decline in downloads.

This is where App Store Optimization is key to make sure people who need a podcast player that isn't the native one can quickly find one, and the app that will do that best can (easily) beat Spotify to the top of the list and right into hungry iPhones. The POdcast App has almost everything in place, and with a little bit of keyword research and minor tweaks, they can cement their popularity.