1. Roblox Pulls a Facebook. How Much Did It Lose?

The almost highest earning game in the U.S. went down for the whole weekend due to a "technical issue". I'm not sure what kids did with all that free time, but what I do know is that going down for so long can't be cheap.

If you recall, in last week's episode we looked at the highest earners, and Roblox was #2, right behind Candy Crush. 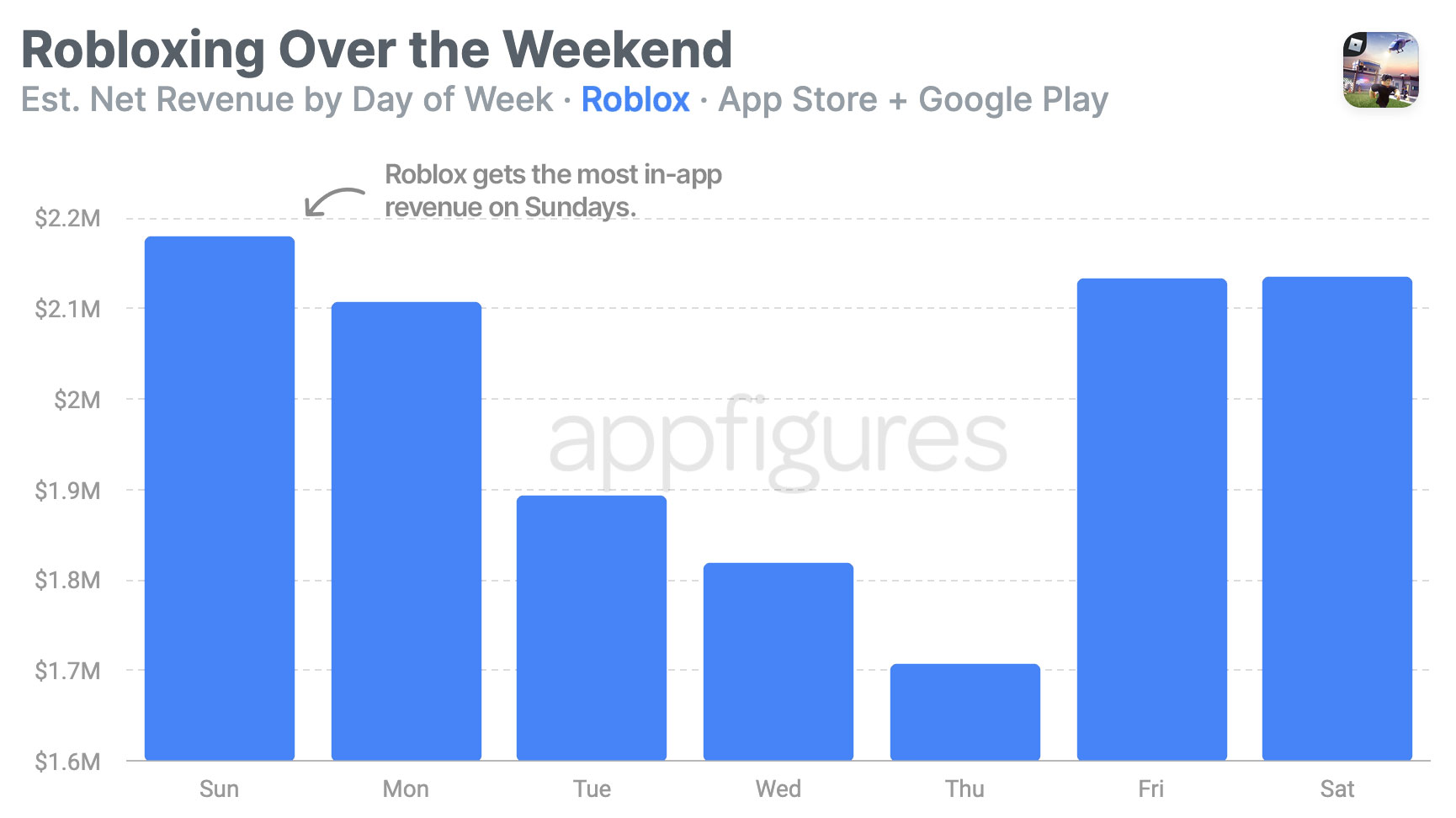 So my immediate thought was "how much are they losing in in-app purchases". We can answer that question by looking at previous weeks, which is exactly what I did.

That's what we estimate Roblox lost, in net revenue, during the outage. I calculated it by taking the average earnings for the Friday - Sunday combo over the last few months. And that's a conservative estimate.

Was Wade Watts too close to winning and the metaverse needed a break? Or did he win and decide to turn it off on weekends? (did you catch the movie reference?). Regardless, that's not a small loss.

There's been a lot of talk about the metaverse lately, and this downtime is a good reminder that reality is real. If we do end up in a Wall-E-like utopia (more likely, a Matrix-like one), incidents like this won't be tolerated by users or advertisers.

What you need to know: Roblox, the highest-earning metaverse, went down and wasn't accessible between Friday and Sunday. The downtime amounted to a loss of $6.5M in net revenue from the App Store and Google Play.

2. Is It Too Late for Firefox?

To do that, let's have a look at downloads of the most popular mobile browsers this year. 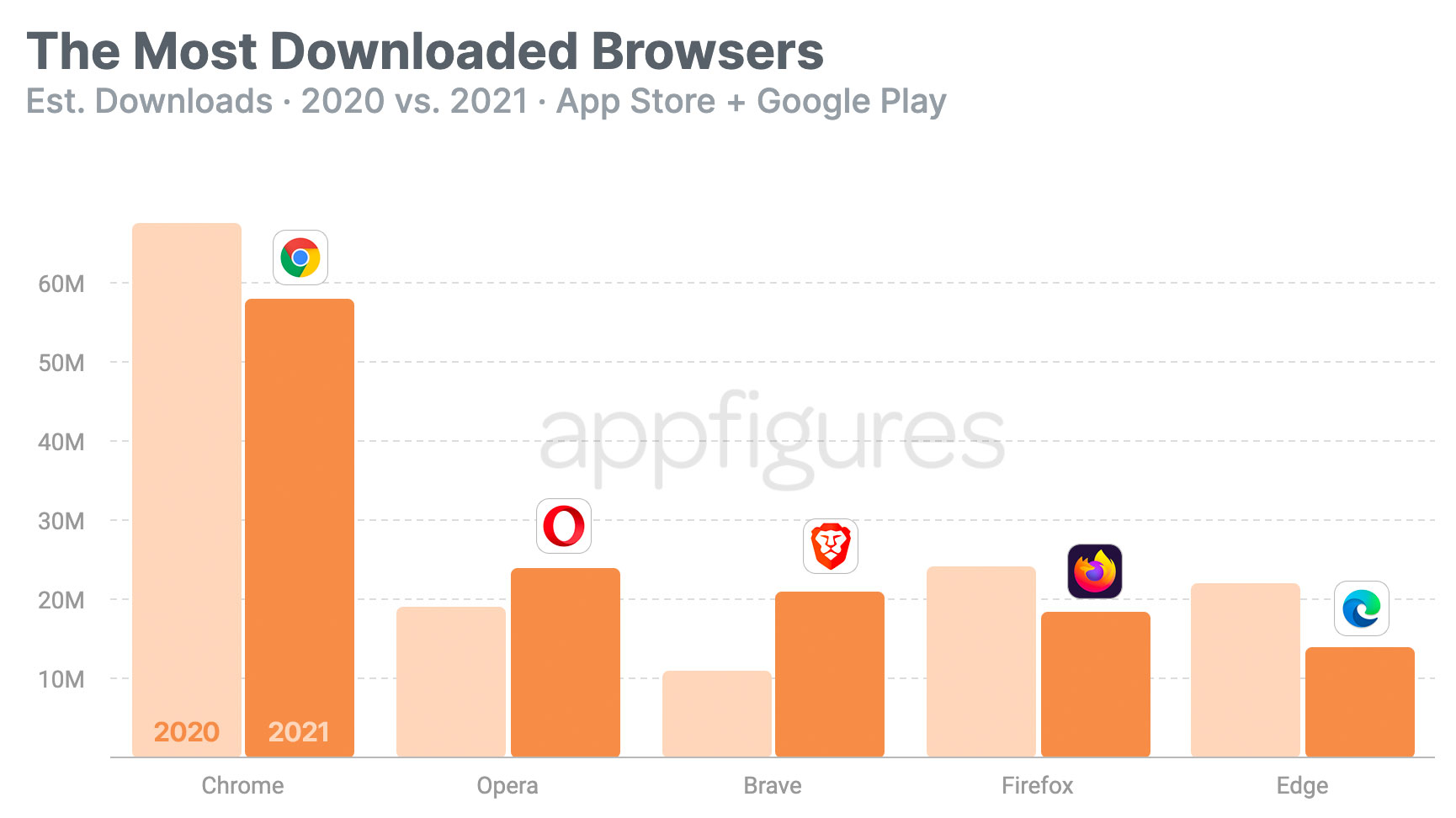 Chrome leads the way, as you probably expect. Opera is right behind it, which I didn't exactly expect, followed by Brave. Firefox is 4th out of 5, beating Microsoft Edge.

Here's another interesting point. Between January and October of 2021, the top 5 mobile browsers were downloaded 136,000,000 times globally, according to our estimates. That's about 5% lower than the same period in 2020. The downward slope isn't the interesting bit, though.

When you compare each app individually, you see that other than Chrome being the most downloaded browser in both years, everything else is pretty different.

A lot has changed year over year. Here's the summary:

A lot of data, I know. The gist is -- the 3rd party browser market is hot and not (yet?) set in stone. Firefox lost a good lead, but it's not too late.

What you need to know: Firefox is trying to regain popularity after losing 24% of downloads in 2021. Opera and Brave got more popular in 2021, but Chrome is still the most downloaded browser in the world.

Crypto is getting real weird. Last week yet another unknown cryptocurrency, Shiba Inu, took command of the news cycle, went up by some fraction of a fraction of a penny, and in the process reminded everyone Coinbase is (un)officially where crypto trading happens these days.

Daily downloads rose to the highest they've ever been, giving Coinbase a new all-time high and sending it to the top of the charts for a bit. 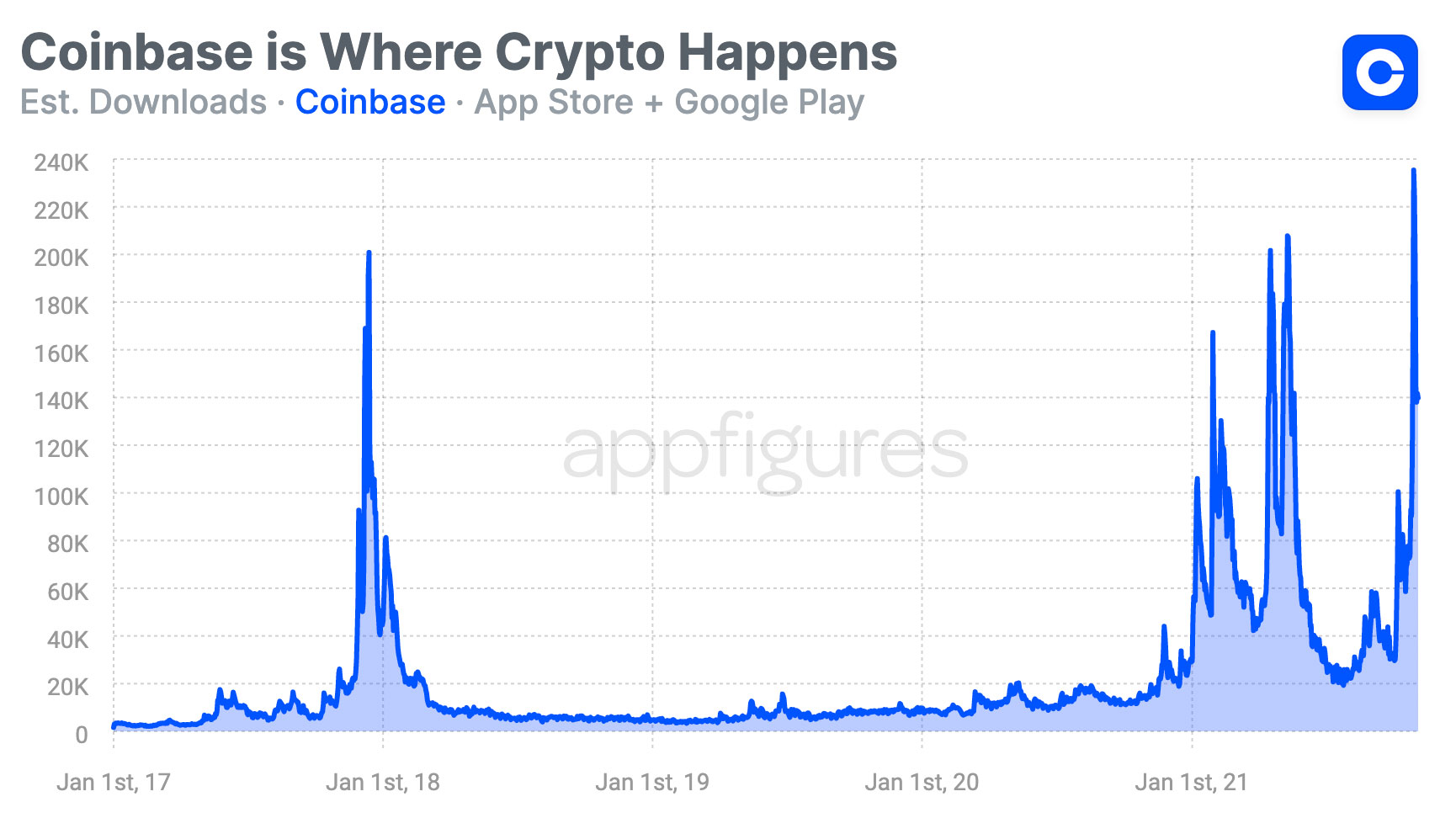 According to our estimates, downloads jumped to 235,000 last Thursday, with the majority coming from the U.S., with the U.K. and Canada in distant second and third places. In September, Coinbase was averaging 40,000 downloads a day, putting this spike at a 6x multiplier.

Before this spike, Coinbase's best day of downloads was back in May, when Dogecoin got everyone giddy. That day recorded 207,000 downloads, a good 14% lower.

Cryptocurrency hasn't fully made it into our everyday lives just yet, but it's on its way. And as that's happening, Coinbase has undoubtedly become the most popular place for mere mortals to buy and sell it.

What you need to know: Coinbase hit a new all-time high last week when daily downloads rose to 235K, the most it's ever seen in a single day. The surge comes from excitement over a new and mostly unknown cryptocurrency, and is a signal that Coinbase is the de-facto standard for crypto trading for mere mortals.

Disney+ had a massive day of revenue in late October. The streaming service set a new all-time high for its revenue, adding more than $3,000,000 of net revenue in a single day (10/22) from the U.S., according to our intelligence. 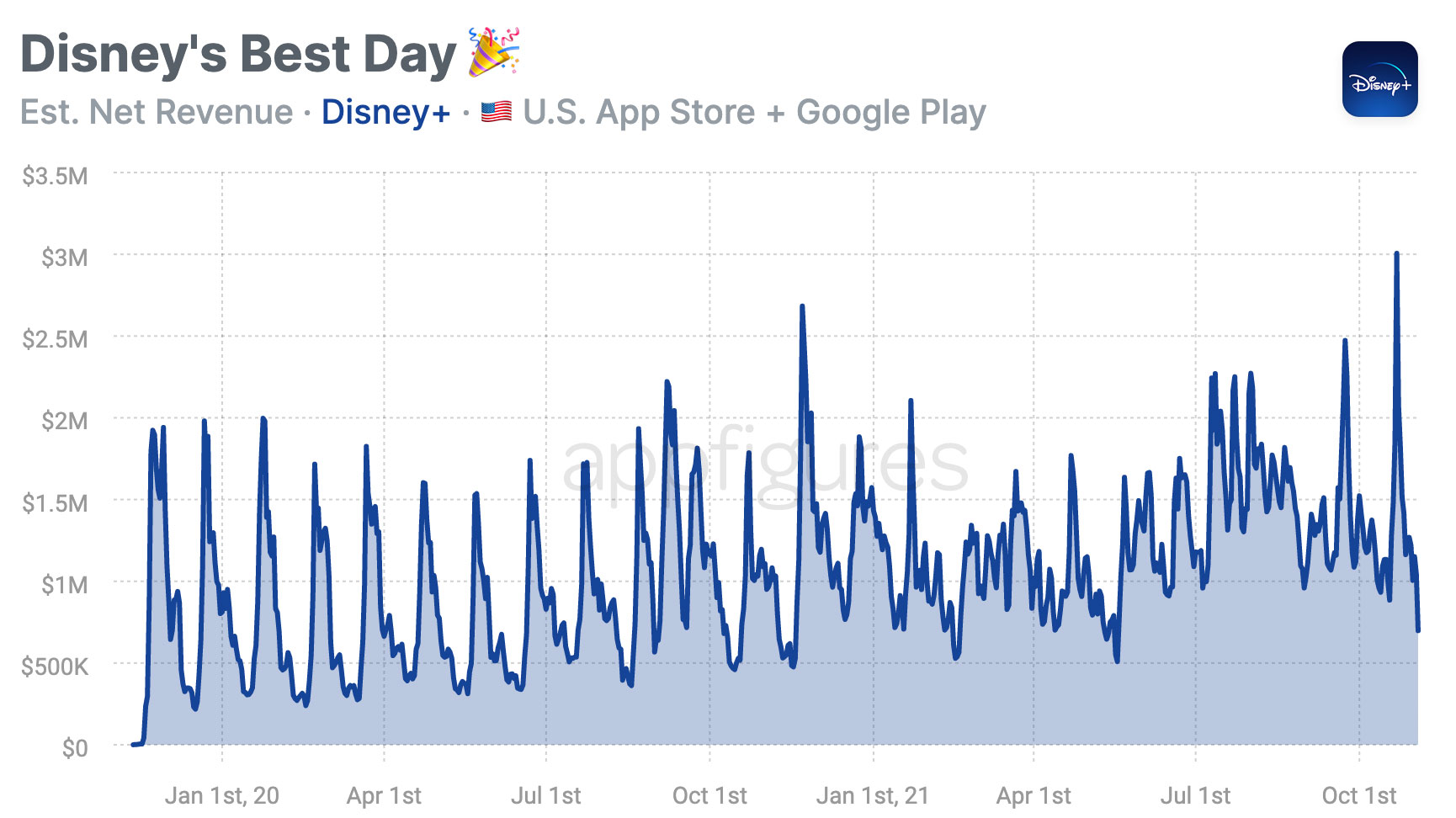 Which exclusive was it this time? Not Black Widow, because that's still not streamable. But with the number of exclusives available on the service, it's really hard to tell at this point.

But there's another aspect to this which many may not consider -- store fees. Apple and Google both drop their fees on subscriptions that last longer than a year. Which means... Disney's net revenue will continue to increase by 15% even if growth completely stops, as long as it can retain its subscribers.

Retention isn't a given because of the popularity of the brand, so Disney can't "bank" on those subscribers sticking around. Instead, it needs to work hard to engage them. The way I see it, that means two things:

This is a pivotal time for streams, something I've talked about more than once. I believe that in a few years we'll start seeing the model go back to one app with a bunch of channels, much like cable. Who will own the app? That's what they're all trying to do.

What you need to know: Disney+ hit a new all-time high, earning more than $3M in net revenue in a single day. The growth is a result of the growing content catalog + a lower fee from Apple and Google for subscriptions that stick around for longer than a year.

5. Klarna Follows Shopify, But Can it Beat It?

Klarna, the buy shop now pay later company that's emerging as the new "standard", has rolled out a new in-app shopping browser to get buyers to the checkout step even faster.

This is a very smart move from a very smart company. The more Klarna controls the shopping flow, the more they can control demand, which in turn means the supply side is (or, will be) at their mercy. That's a pretty powerful position to be in. Given how fast the popularity of BNPL is rising, this move can set them up for long-term success. 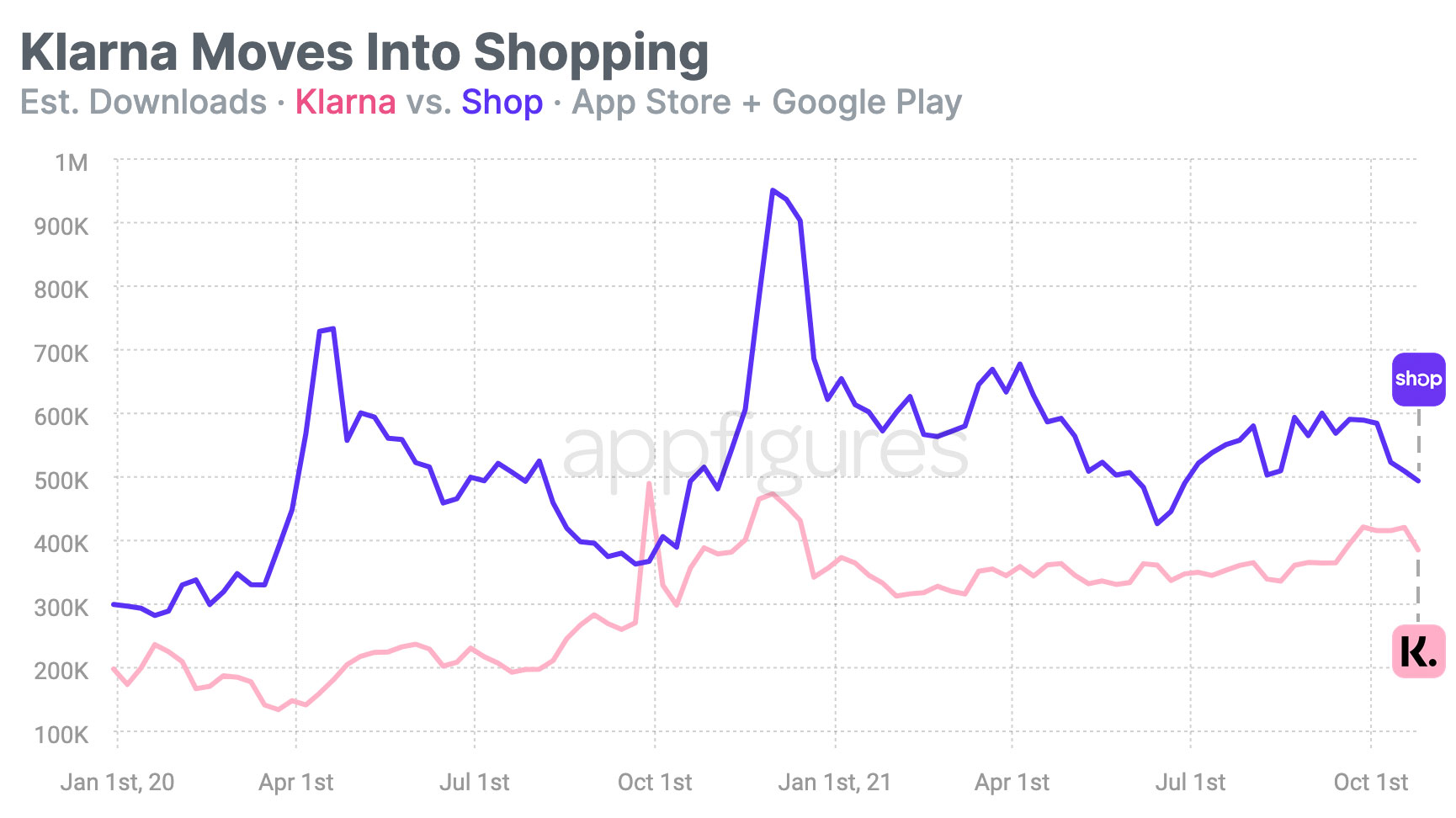 But, this move reminds me of another smart company that did something very similar. Remember when Shopify rebranded its package tracked to Shop and added in-app shopping? Well, this is pretty much the same.

Shop's and Klarna's mobile apps are now in a head-to-head match, and both are competing for the same kind of engagement. They're battling Amazon and a slew of other apps, but I'm going to skip the 1st party experiences because both Klarna's and Shop's shopping is all about buying from stores they don't run.

In the U.S., where both are popular, downloads of the two are very close. Shop averages 40% more downloads on a weekly basis vs. Klarna. Our estimates show that in an average week, Shop adds 560,000 new users in the U.S. while Klarna adds 400,000.

The main difference between the two, as you can see in the chart, is that Klarna's downloads are growing while Shop's ebb and flow but are overall flat. Since the beginning of 2020, Klarna's weekly downloads doubled. Much of the growth was in 2020, but with the new shopping experience, I expect we'll see more growth in the coming months. Especially as we head into the holiday shopping season.