2021 was an intriguing year in mobile and propelled what I think will be a very important trend in 2022.

Let's have a look at the numbers and then talk about what they mean. 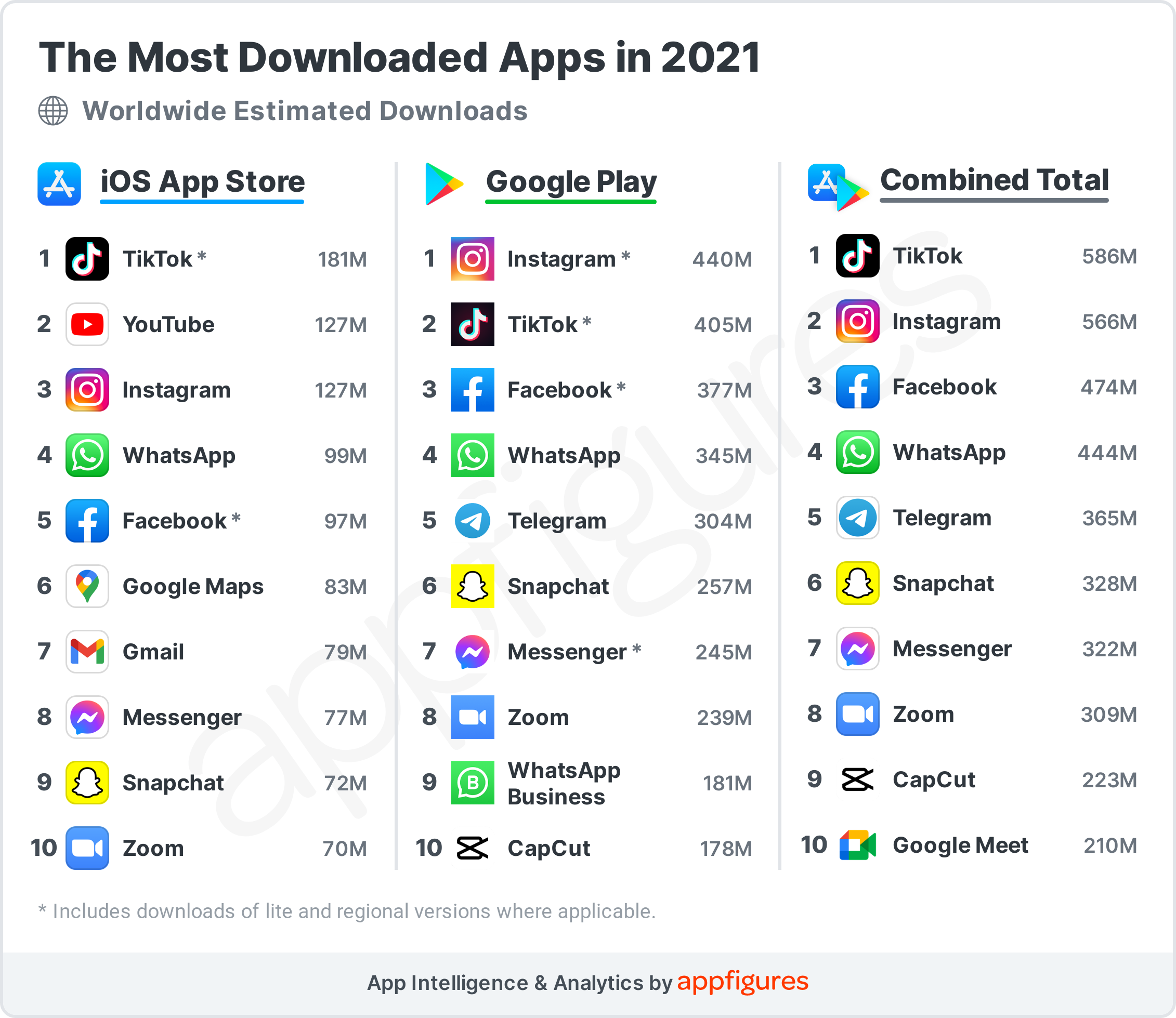 According to our App Intelligence, TikTok was the most downloaded app in 2021, with more than 586 million new downloads globally. It fought a strong battle with Instagram, which ended 2021 in the #2 spot with 566 million downloads.

The rivalry between these two tells the story of the year, in my opinion. Creators. More on that in a second.

Facebook and WhatsApp rounded out the Meta trio in spots 3 and 4. Facebook's Meta's control of mobile is still very strong.

As we dip lower, we have Telegram, which has a magnificent year, adding 365 million new users. It had help from WhatsApp early on but has maintained demand all on its own month after month.

Do you see the pattern here?

Five of the top 10 apps have something to do with creators. And in the case of CapCut, TikTok's video editing app, it's just about creators.

YouTube, the original home for creators, isn't on this list only because it comes built-in on Android devices, so we can't estimate new downloads. If we did, I'm sure it'd be sitting up high with TikTok and Instagram. We can see that pretty clearly on the App Store, where we can estimate its downloads.

I've covered creators and the revenue they earn a bunch of times this year in the newsletter and fully expect this to become the hottest trend of the new year.

TikTok and Twitch already have ways for creators to monetize, YouTube's shorts pays creators, and Twitter's Super Follows are taking off.

Are app developers considered content creators? I wasn't sure myself, so I asked Twitter, and the results were split down the middle. What do you think?

Although Twitter didn't make the most downloaded list, it did have a really good 2021. In fact, it had a great November (and October) where it hit the highest number of downloads in a looooong time.

For all the talk of TikTok and Instagram, seeing Twitter grow is an interesting change of pace. 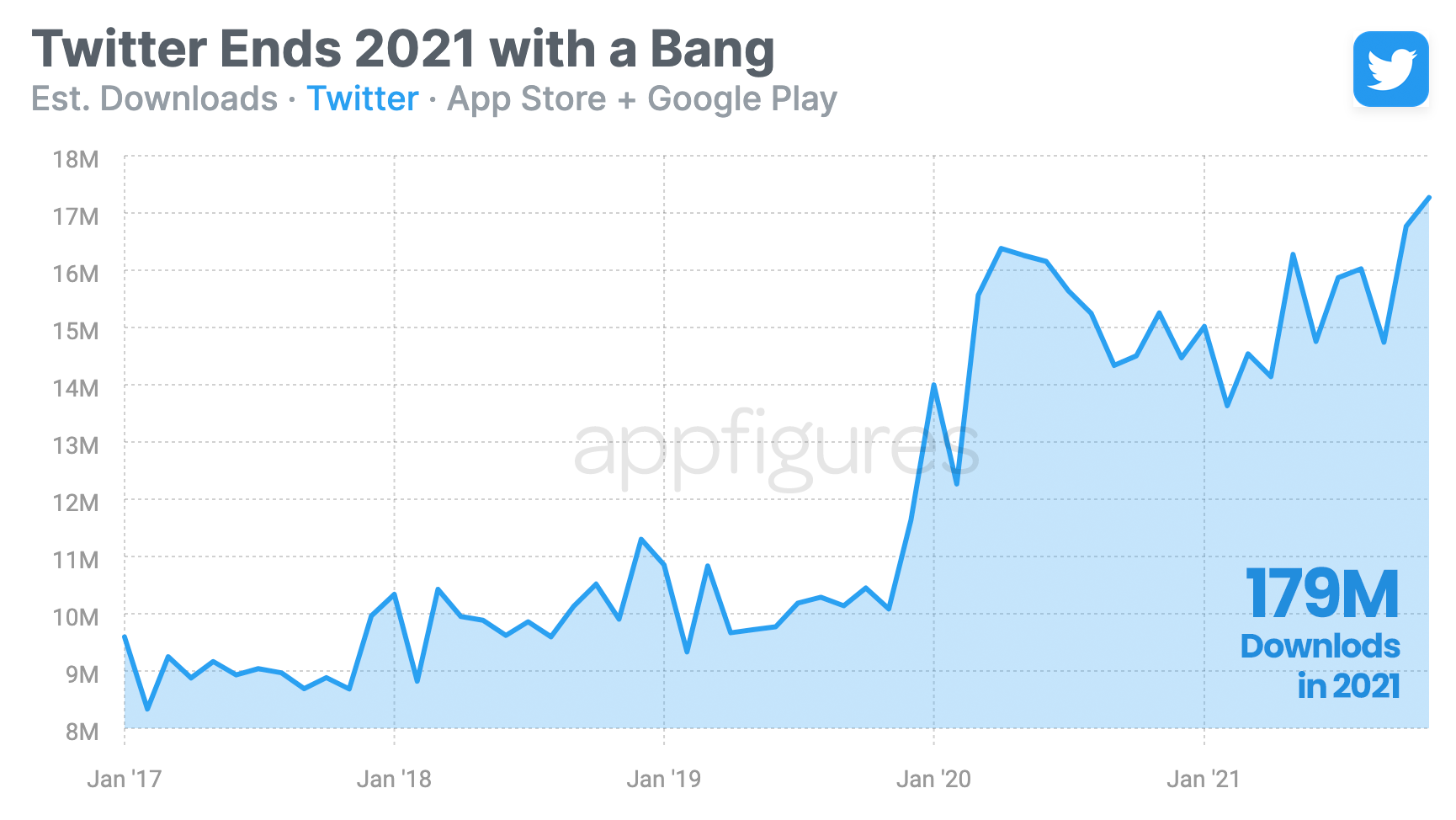 Downloads in November hit 17.3 million, according to our estimates. That's across its iOS app, Android app, and lite Android app. The lite version of Twitter, which is only available for Android, has contributed a small but decent number of downloads. It, too, grew significantly recently.

In fact, a good chunk of Twitter's growth has been on the Android side of things, which accounts for roughly 72% of all downloads in 2021.

Twitter's previous best month of downloads was October of this year, with 16.8 million downloads. But the one before it requires looking all the way back to April of 2020.

Twitter has been through a lot and has changed a lot, unlike any of the other platforms we see these days. That evolution, which I initially thought would hurt it, doesn't seem to be. It'll take some time, but Twitter does have everything it needs to remain an active contender in the race for content and creators.

3. What Reddit's Year in Revenue Means for the Future of Creators

You know who else had a magnificent month? Reddit.

Although Reddit has been around for what feels like forever but has become a household name over the last couple of years. Things like the gamestonk ordeal from January have made it into a destination for mere mortals.

Reddit hit a new milestone in November – It made the most revenue in a single month, ever, in its app's entire money-making existence. 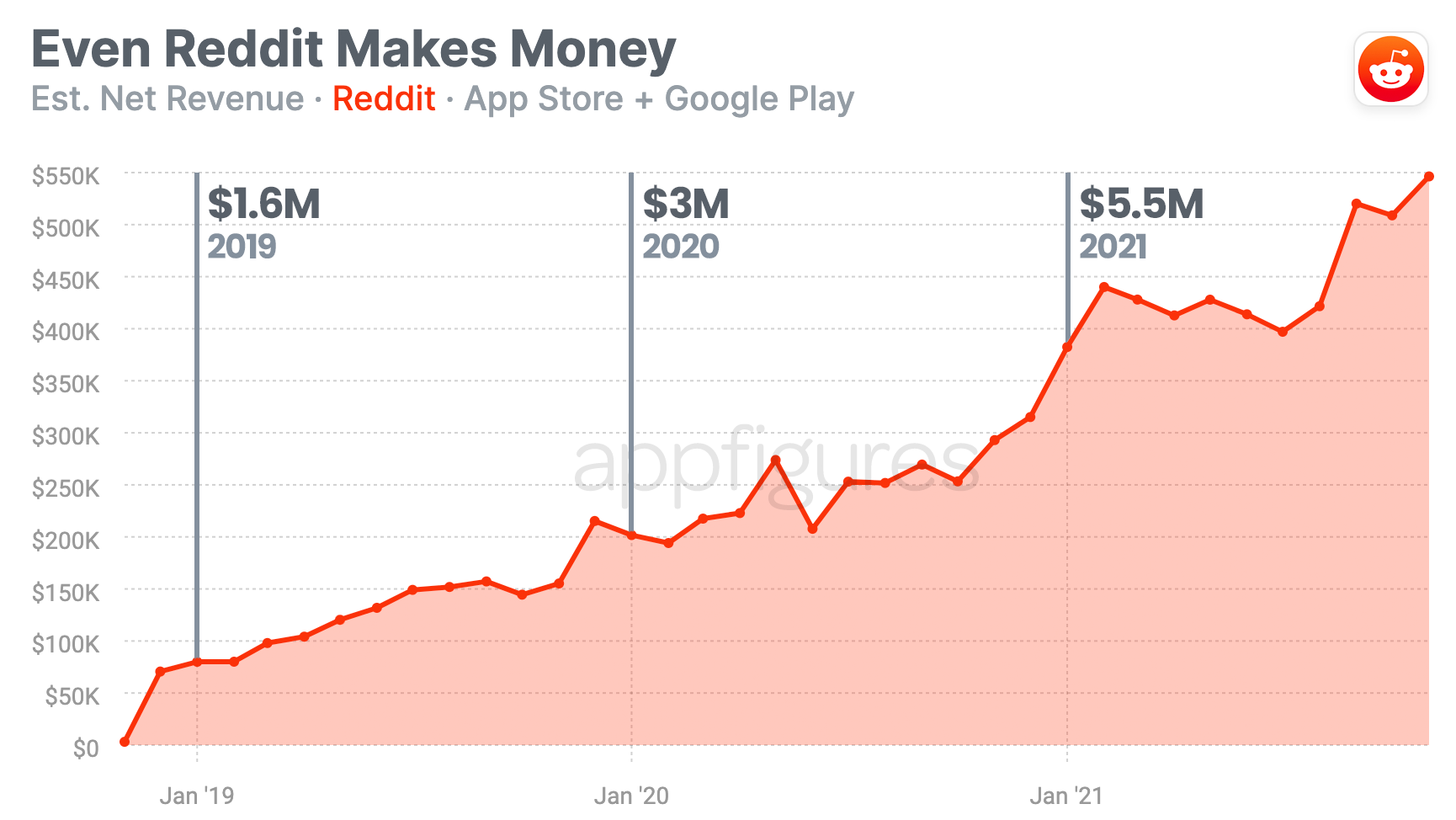 Now, we're still talking chump change in comparison to Twitch, which has the same revenue model for creators. But it's not just about the money. That money is nice, but... it continues to reinforce the trend I'm saying will be even hotter in 2022.

The good news here is that a "creator", at this point, can create in a variety of ways, and they all pack enough opportunity for revenue.

Short videos on TikTok are very different than games streamed on Twitch, videos published on YouTube, podcasts published on Spotify or Apple Podcasts, and written content shared on Reddit or Twitter. If you ask me, this is a massive opportunity for creators, and we'll be seeing even more of it in 2022.

Did you know I'm also on YouTube? Check out the channel

Let's put trends on hold for a moment and talk about something that just happened.

AirTags have quickly become very popular, stealing the thunder from pretty much every other tracker out there (like Tile) by having a discovery network, in case a tag's lost, that's truly second to none.

They've become so popular that Apple did something it's normally reluctant to do. Apple made using AirTags possible on Android. 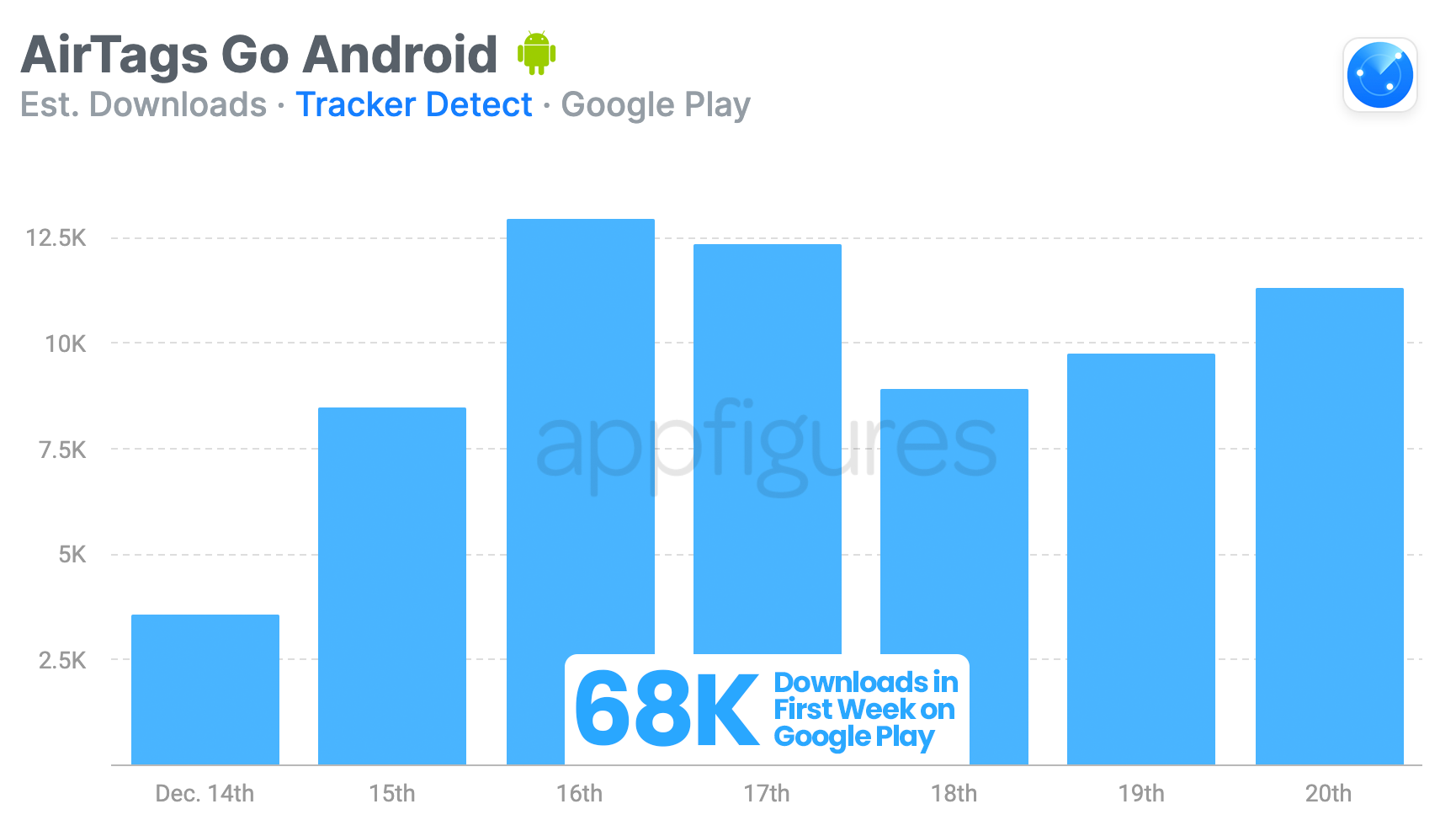 The US was responsible for 37% of those downloads, followed by Germany, Russia, the UK, and Canada. But the list stretched fairly long where we see a handful of downloads from Bulgaria and Romania.

Much like Apple Music and Apple TV, both of which are Apple-first apps (unlike Shazam) that have made their way into the Android ecosystem because Apple wants market share more than device sales, Tracker Detect is now another tool in Apple's growing arsenal of products that don't rely on an iDevice.

By this logic, I fully expect to see a standalone Android app to manage the HomePod come out soon.

Speaking of popular things, last year, Apple released iOS14 and with it, widgets, which were the hottest feature for the rest of 2020. A few apps were born to offer widgets, and a ton of apps added widgets, but one came out the undoubtful winner.

That's Widgetsmith, the app that became the way to add custom widgets pretty much overnight.

A year later, I was curious to see whether it's still successful. To do, that I'm going to look at revenue estimates because a download is nice, but a paying subscriber is nicer.

The simple answer is yes, based on the numbers, it's still earning money.

Cumulative net revenue since the app was released hit $3 million this month. It got to $2 million back in June and earned its first million of net revenue back in December of 2020.

So, the pace slowed down quite a bit, but it's still looking pretty healthy.

I love seeing the success of Widgetsmith because it wasn't made by some big-name company with a big marketing budget. It was developed by an indie developer who was at the right place and the right time + knew what to build. That last one is key.

Are you keeping an eye out for opportunities?