1. India Bans 54 Apps and Games, Including a Top China-Backed Game

Last week the government of India instructed app store operators to remove a list of 54 apps and games from their stores immediately. No reason was given.

I scanned the list as soon as it came out, and for the most part, it was little utilities that probably steal data and other apps from Chinese developers.

But last on the list was Garena Free Fire Illuminate, one of the most popular games in the world right now! 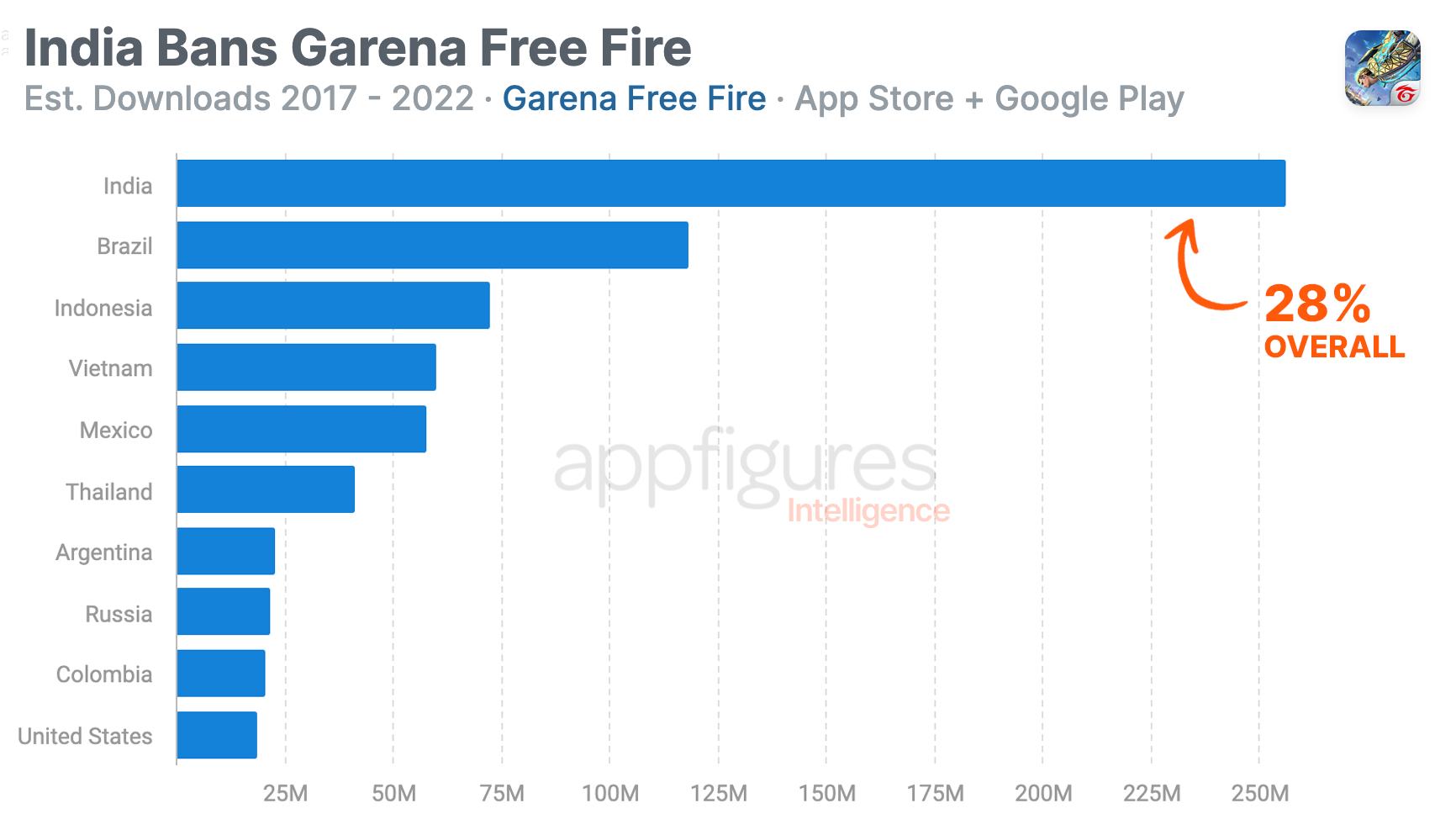 When looking at downloads of the game, which is backed by the Chinese giant Tencent, I noticed that India was actually the biggest driver of downloads since the game was released in 2017.

According to our estimates, more than 28% of the total downloads across the App Store and Google Play came from India. Brazil, Indonesia, Vietnam, and Mexico were the top 5 countries, but none of those was even close to the scale of India.

Much like the hit TikTok took when it was banned in India last year, I expect Garena's overall numbers to drop significantly post-ban.

Luckily for Garena, India isn't where most of its revenue comes from, and interestingly enough, Garena Free Fire MAX wasn't on the ban list.

Zooming out. The war between India and China continues to play out through apps, and I wonder if the politicians who make these rules understand the power they have, and that there are better ways to leverage it.

2. The Highest-Earning Games in the US

Speaking of games, this week I crunched the numbers to rank the highest-earning games (and apps, a bit below) in the US for the last month, and guess who came in at #4? 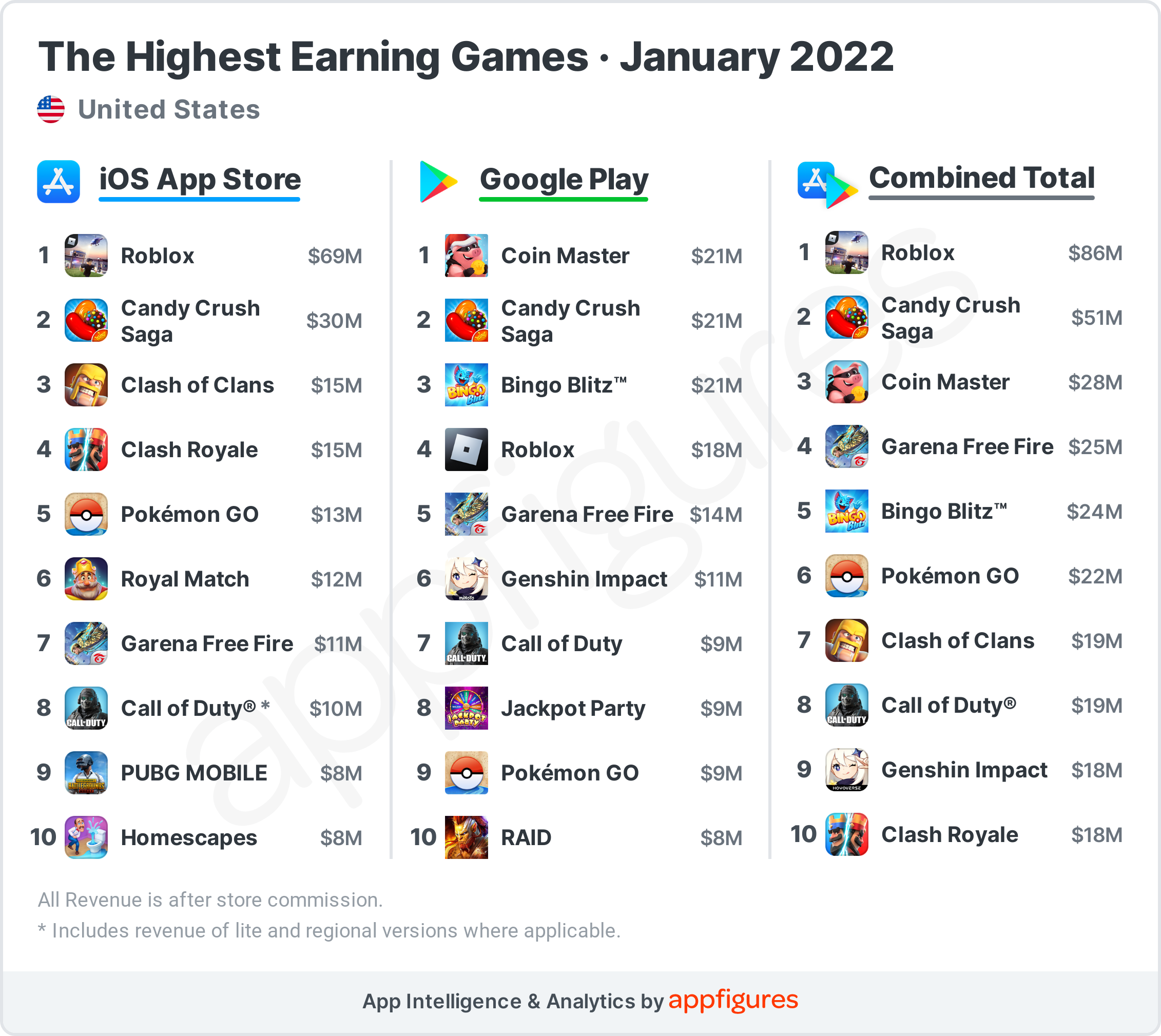 Roblox was the highest-earning mobile game in the US in January, earning more than $86M of net revenue, that's after Apple and Google take their fees, according to our estimates. Candy Crush Saga was right behind it with $51M in January across the App Store and Google Play.

These two have been in command of this list for a while now. I don't expect that to change any time soon.

Coin Master, Garena Free Fire, yes, that Garena, and Bingo Blitz round out the top 5 overall.

We estimate that together, the top 10 highest earners brought in $310M in net revenue from players in the US in January.

3. TikTok Was the Highest-Earning App in the US Last Month

This week I also crunched the numbers to rank the highest-earning apps in the US, so you can see the full picture, and if you've been following along for long enough, it should come as no surprise that TikTok is now in the lead. 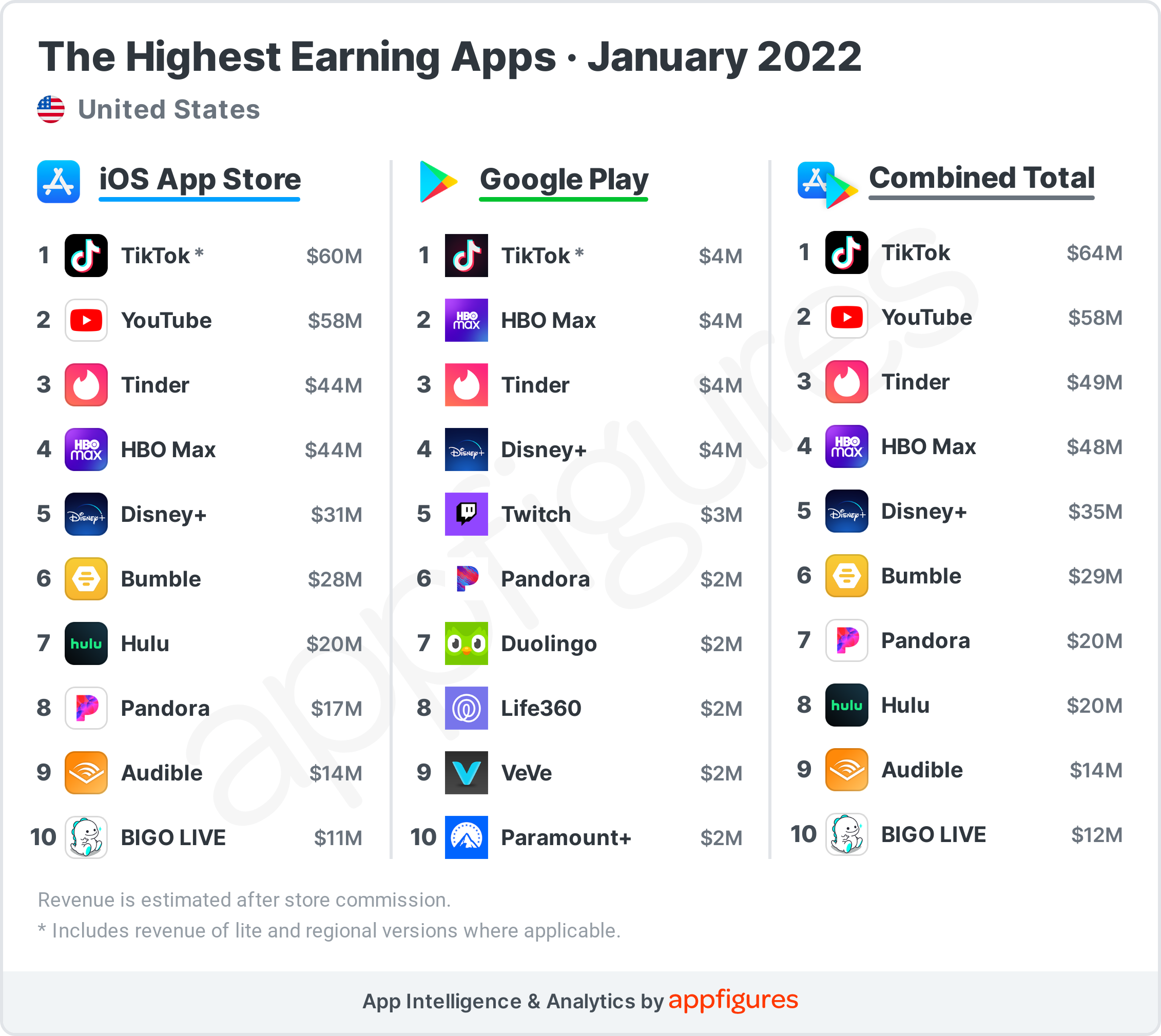 TikTok was the highest-earning app in the US in January, earning $64M of net revenue from the App Store and Google Play, according to our App Intelligence.

And it wasn't a hard win either. TikTok was the highest-earning app on the App Store and Google Play in January. That wasn't the case in December.

YouTube, Tinder, HBO Max, and Disney+, the usual suspects, rounded out the top 5 highest earners in the US.

Of the top 10, only one app didn't change its rank between December and January, and that's HBO Max, who retained its #4 spot. Another not-so-surprising insight given its very strong year opener.

According to our estimates, the top 10 highest earners in the US added $348M of net revenue, that's after store fees, to their bottom line in January. Not as much as December's massive haul, but it's really hard to outdo December, so it wasn't expected.

4. The Super Bowl Reminded Us About the Olympics

Have you been watching the Olympic games?

I love sports but missed out on most of the first week simply because it wasn't really covered by the normal places I get my news from.

And it looks like I'm not the only one. When I analyzed download patterns for Peacock and NBC sports last week, the apps you'd use to watch the games, the wasn't any significant bump as I had expected. That's why you didn't see any mention of it in last week's issue.

But then the Super Bowl happened, which was viewable on those two apps, and it heavily promoted the games. 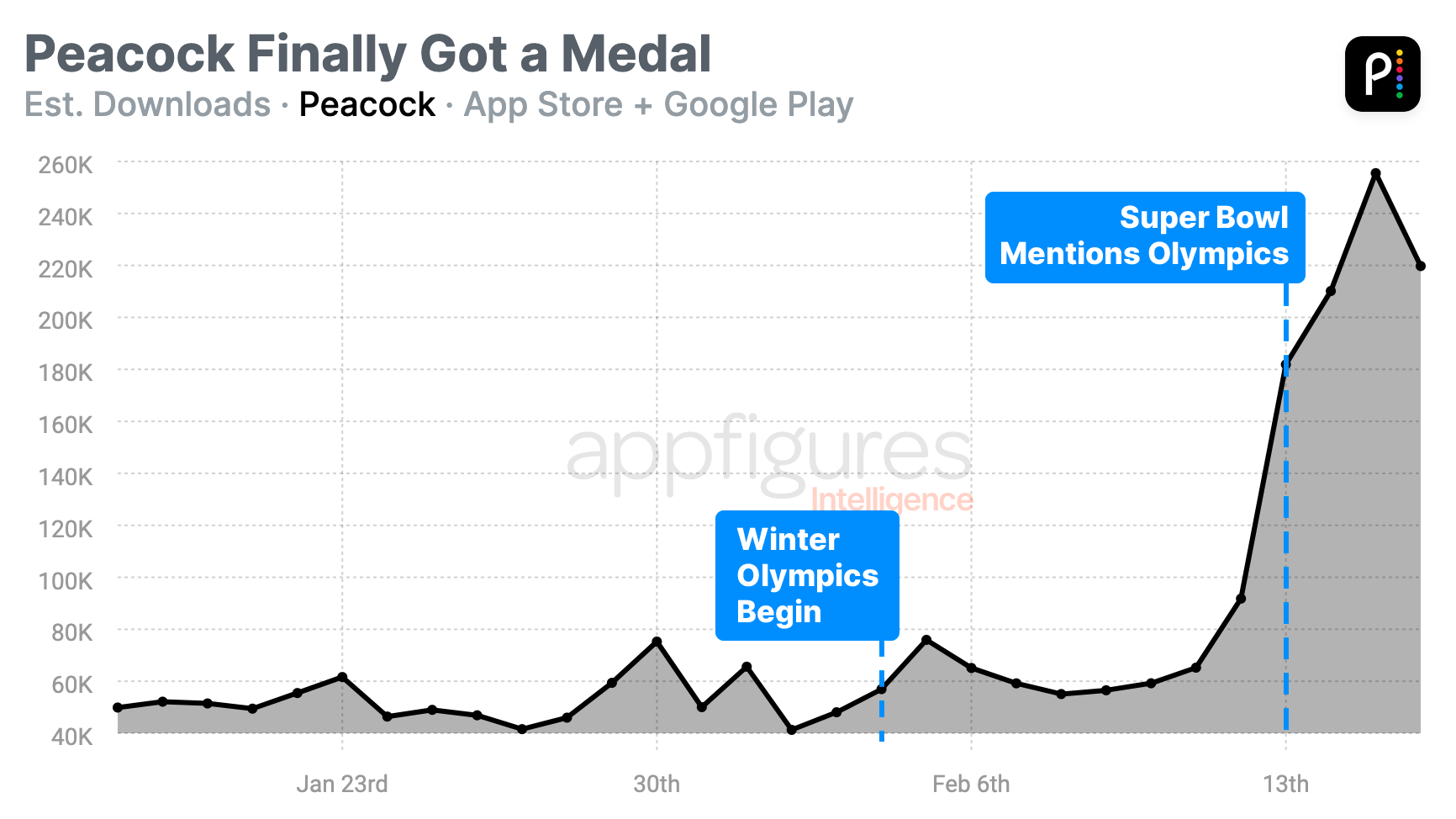 The Winter Olympics officially started a week before the Super Bowl. But looking at downloads for Peacock, which ended up being the destination for views, you wouldn't be able to guess that something that big was going on. Not for the first week, at least.

Downloads grew a bit, going from a daily average of 50K downloads to roughly 60K daily downloads, according to our estimates. That's during the first week of the Olympics.

Then the Super Bowl happened, which gave Peacock a nice bump in downloads, but it didn't stop there!

Downloads rose to 180K on Sunday, but unlike Coinbase's downloads, which slumped right away, Peacock's continued to soar.

Thanks to the coverage of the Olympic games, downloads crossed 200K on Monday and hit 260K on Tuesday. They sloped down a bit on Wednesday, but not by that much.

I wonder what would have happened if there was no overlap...

5. How Much Free Bitcoin is Coinbase Giving Away?

Coinbase, the crypto trading platform that's almost synonymous with cryptocurrency, went big this Super Bowl with a clever ad and a very attractive promotion. They promised $15 of bitcoin to everyone who scanned a QR code that was flying on the screen.

Giving money is a great way to get engagement! McDonald's does that every summer, and it works very well.

So, how much Bitcoin is Coinbase giving away? 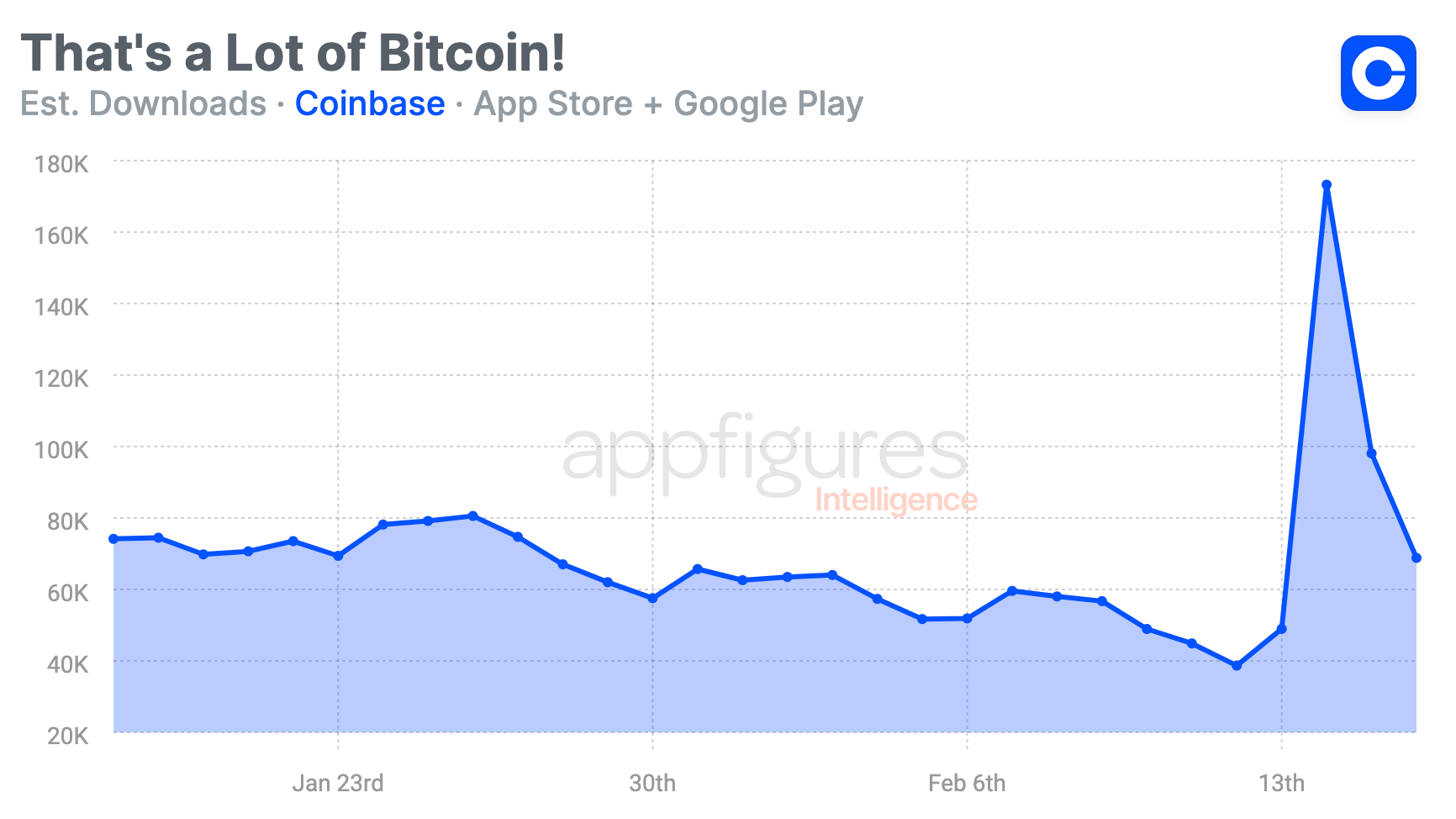 According to our estimates, the Coinbase app was downloaded 350K times between Sunday and Wednesday, across the App Store and Google Play. And this estimate is pretty conservative.

If they all sign up and qualify for the promotion, Coinbase will be giving away a little over $5M worth of Bitcoin.

Zooming out a bit. While nice, the goal Coinbase has is to make it easier to get into crypto, and of course, through their platform. But this goal advances the entire crypto space, making it more accessible to the masses.