1. The Highest-Earning Games in the US

I crunched the number this week to rank the highest-earning games in the US in February. I ranked apps last week, in case you missed it. 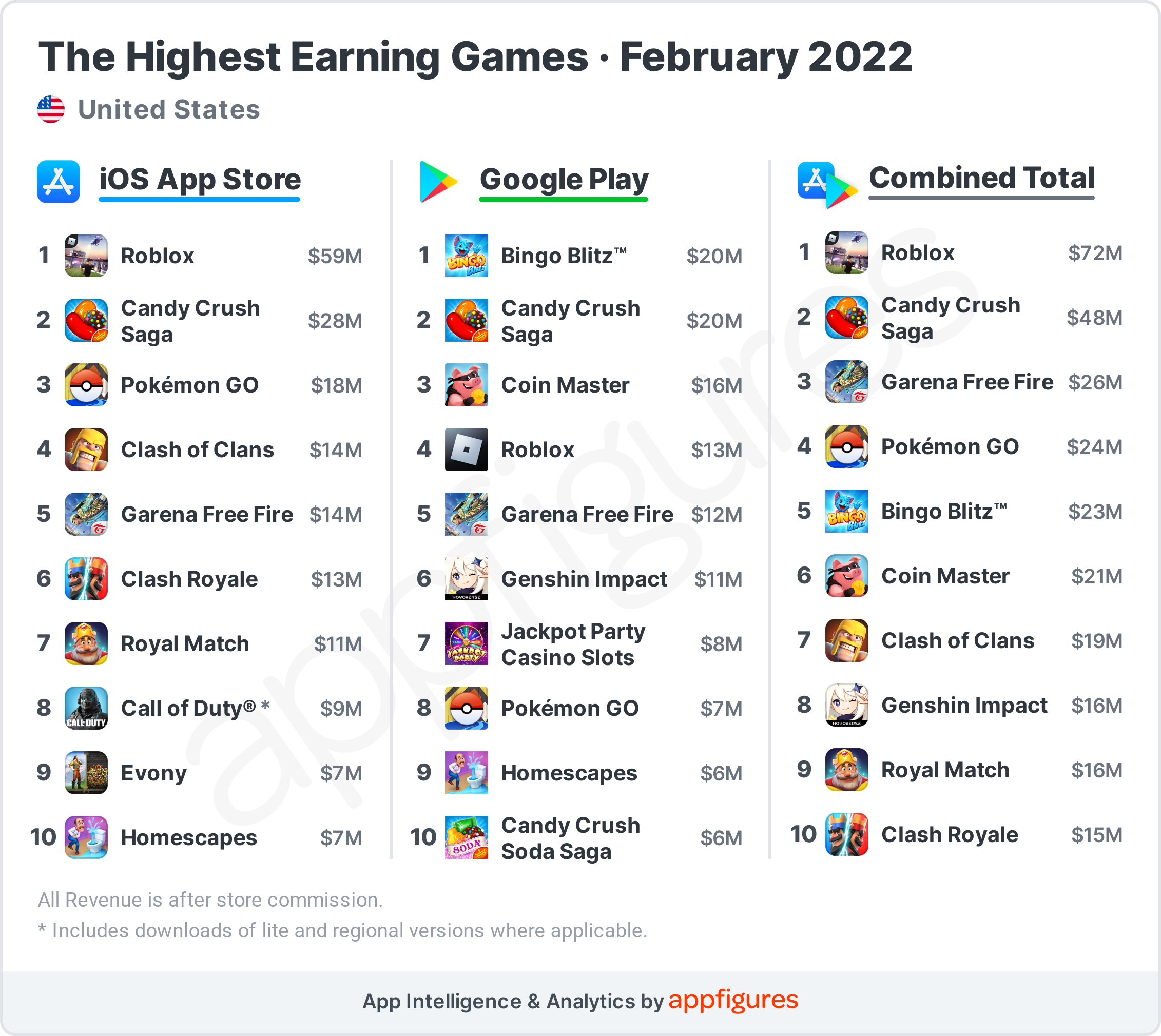 Roblox was also the highest-earning app in the App Store in February, and much like the insight above, you can see the difference in revenue between revenue from the App Store and Google Play, where Roblox ranks 4th.

Garena Free Fire, still banned in India, comes in at about half of Candy Crush. Pokémon Go and Bingo Blitz stop the halving and round off the top 5 highest earners in the US, with similar net revenue.

Together, the highest earners brought in $280M of net revenue in February, according to our estimates. Like the highest-earning apps and even the most downloaded apps and games, which I covered over the last few weeks, this total is a bit lower than January's.

2. Monetizing on Google Play is Hard! Here's What it Looks Like

How much money is there on the App Store vs. Google Play? That's a question I hear often, and this week I found a very interesting case in the wild that can show you the difference.

Motionleap, an app that animates photos, made its way into the top 5 in the App Store last week. We've seen a few apps from this category rise to the top organically in the last few months, but a quick look at the downloads showed this was less viral and more paid user acquisition. 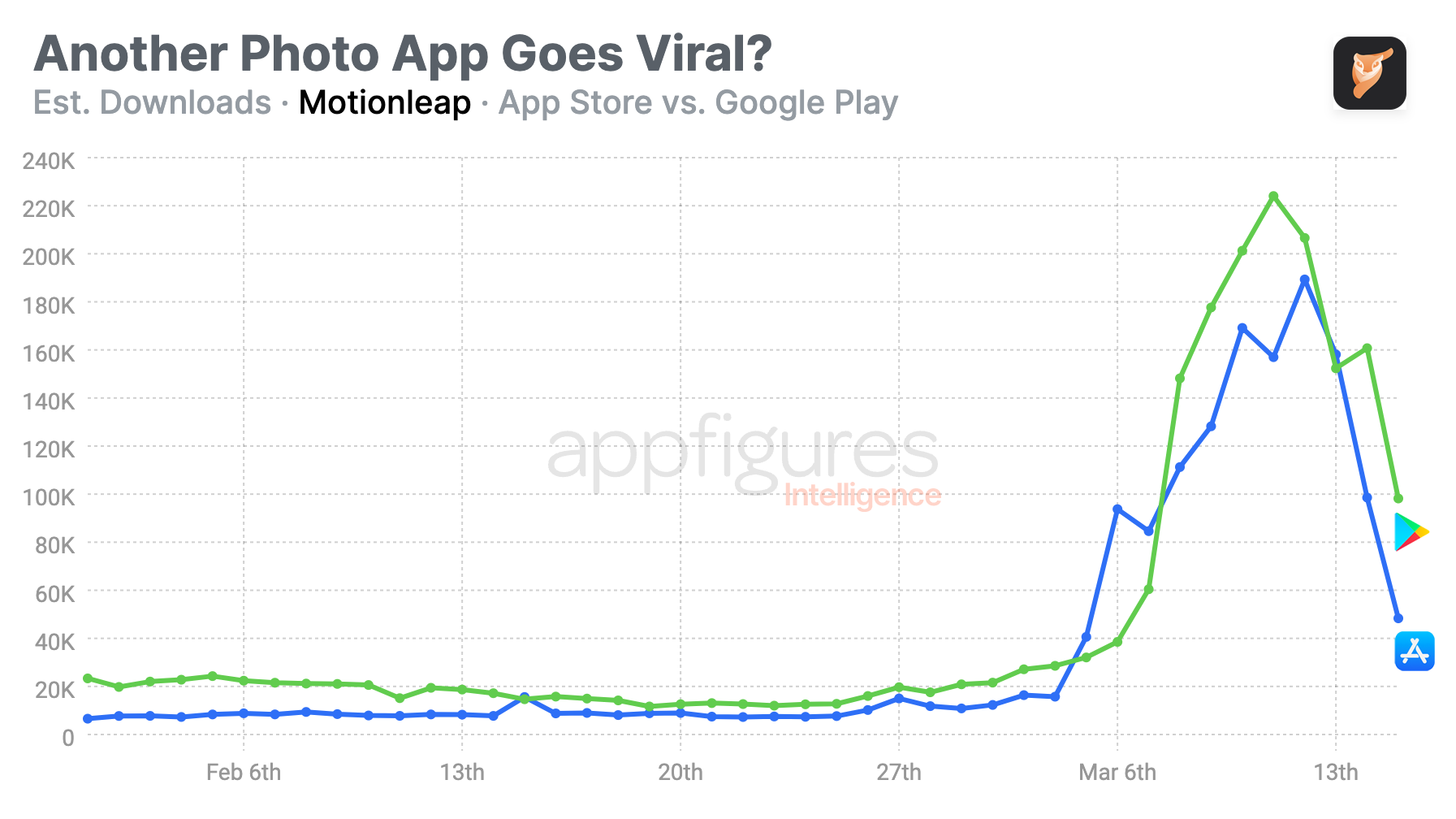 I say that after looking at the rate of the growth, how downloads were nearly parallel across both the App Store and Google Play, and the country distribution.

Knowing the app is getting a similar number of downloads across both stores and at roughly the same speed means we can look at how revenue is growing across the stores to see which store is stronger. After all, the app offers the same functionality across both platforms, and it's not exactly niche. 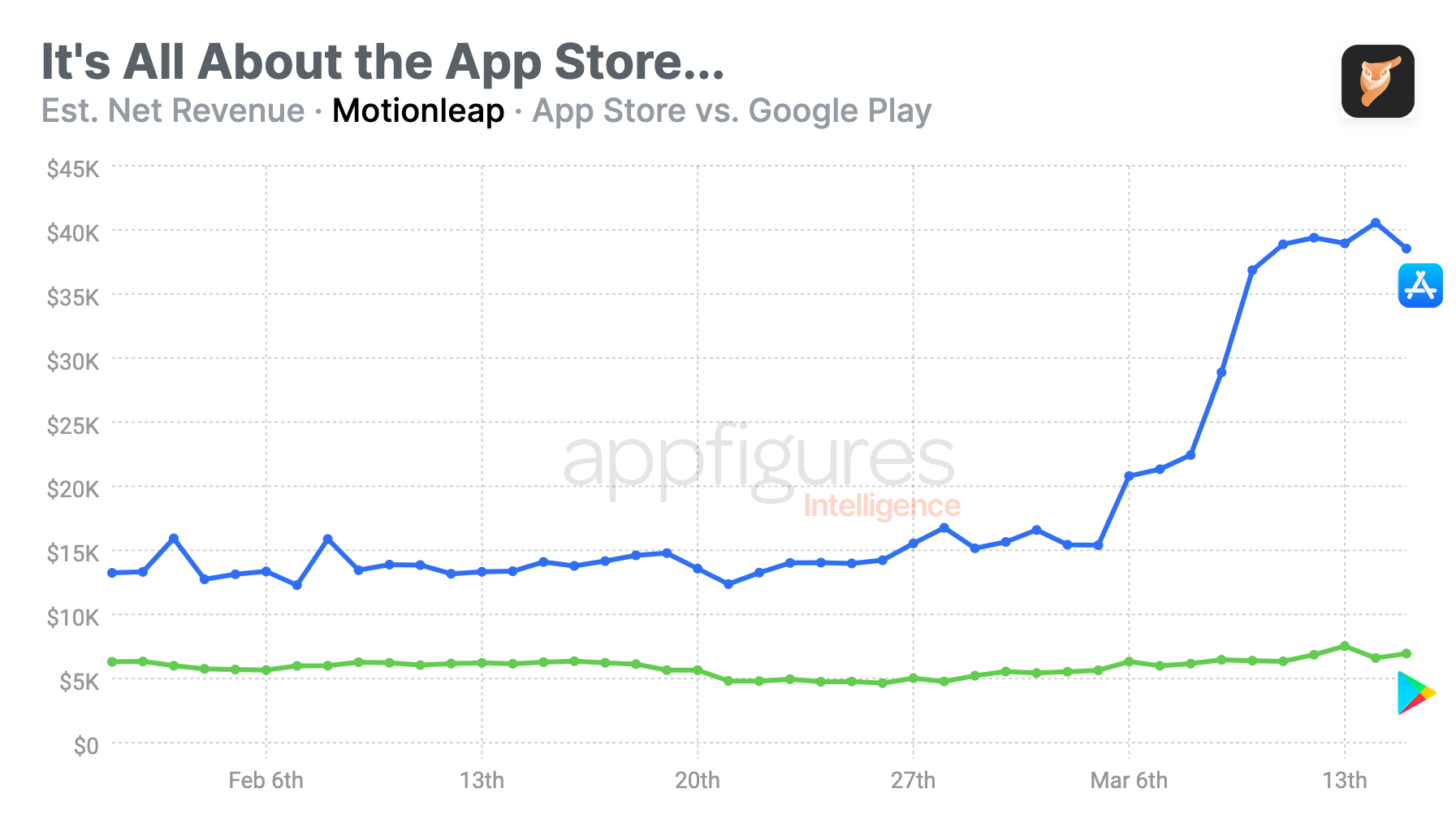 To answer the main question - The App Store is much, much, much bigger when it comes to revenue.

So far in March, Google Play was responsible for about 19% of the total net revenue, which we estimate was a few dollars shy of a half million dollars.

This is, of course, just one app, but it tells the story of Apple vs. Google quite well.

I don't want you to take this as your reasoning for not building for Google Play, and we have to keep in mind this isn't revenue from Android but rather specifically from Google Play. Just keep these figures in mind as you make your decisions.

And, read on for more examples from the game side of things.

I've worked with a few journalists this week to help them with content for their stories, which meant keeping my mind on the news. I mostly concentrated on the top apps but noticed a trend in Russia I found interesting.

While Russia's preferred messaging app is Telegram, a trend that's been very strong for a long time, and as you can see below, only gotten stronger, smaller rival and Elon Musk's favorite Signal was barely getting any downloads.

That changed abruptly when the invasion of Ukraine started. 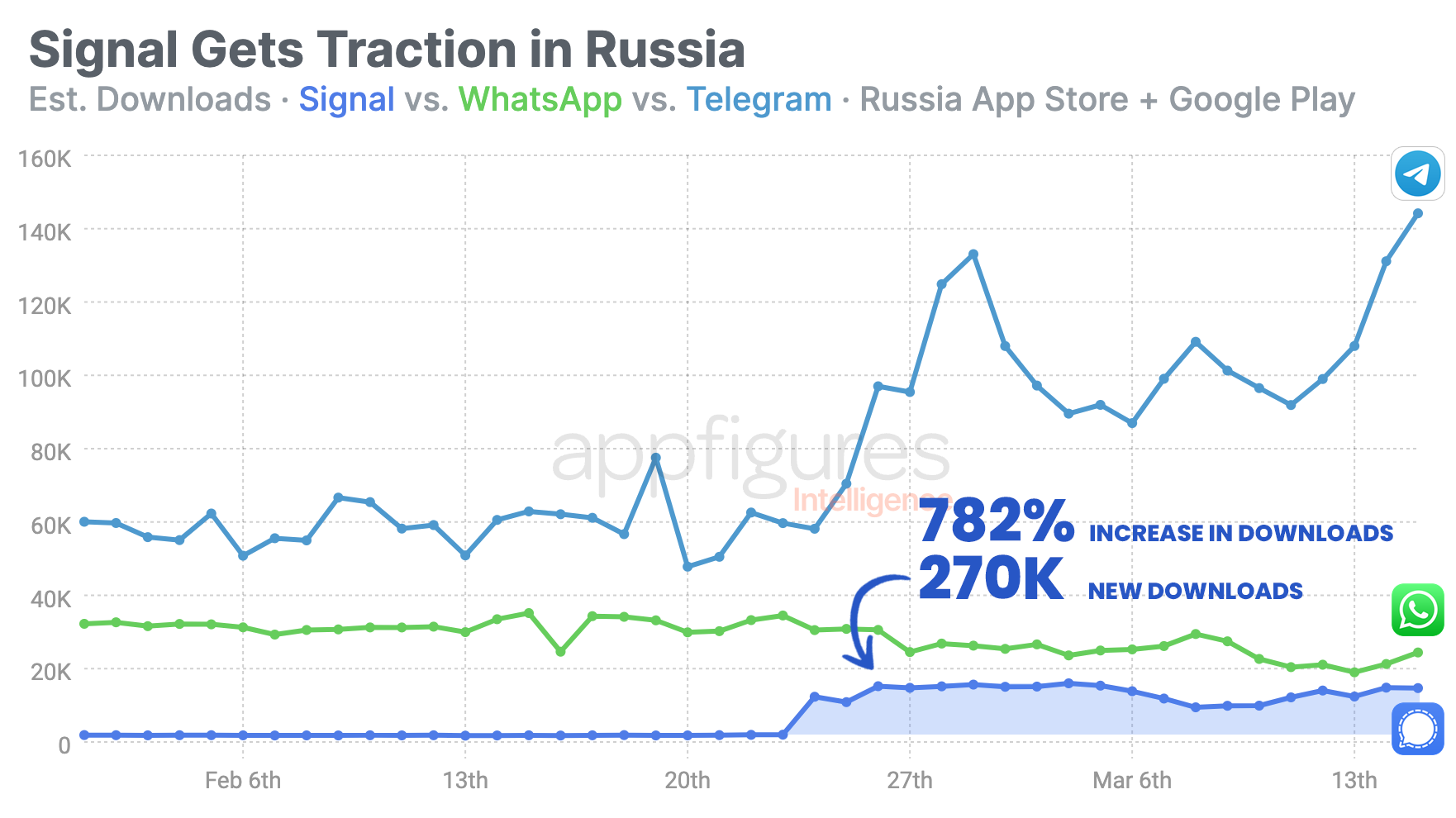 I charted downloads of Signal, WhatsApp, and Telegram to give you an idea of the scale each has, and pre-war, Signal had very little. But that changed.

Downloads rose more than 780%, from an average of under 2K per day to more than 15K, according to our estimates. Telegram's downloads rose as well. Not as sharply, but they started at a much higher spot, so that's not a surprise.

Where are all of those downloads coming from? and why Signal?

The need to stay connected right now is an obvious answer, but it's not the only one.

WhatsApp, which was popular in Russia, is now blocked after Meta (aka Facebook) decided to change its rules, which Russia didn't like. Those lost downloads have found a new home in Signal and Telegram.

4. Starlink is the Most Downloaded App in Ukraine Right now

I've been looking at apps in Russia a lot lately, but this week I want to bring your attention back to Ukraine, where a new(ish) app has taken control of the App Store and Google Play.

That app is no other than Elon Musk's Starlink! 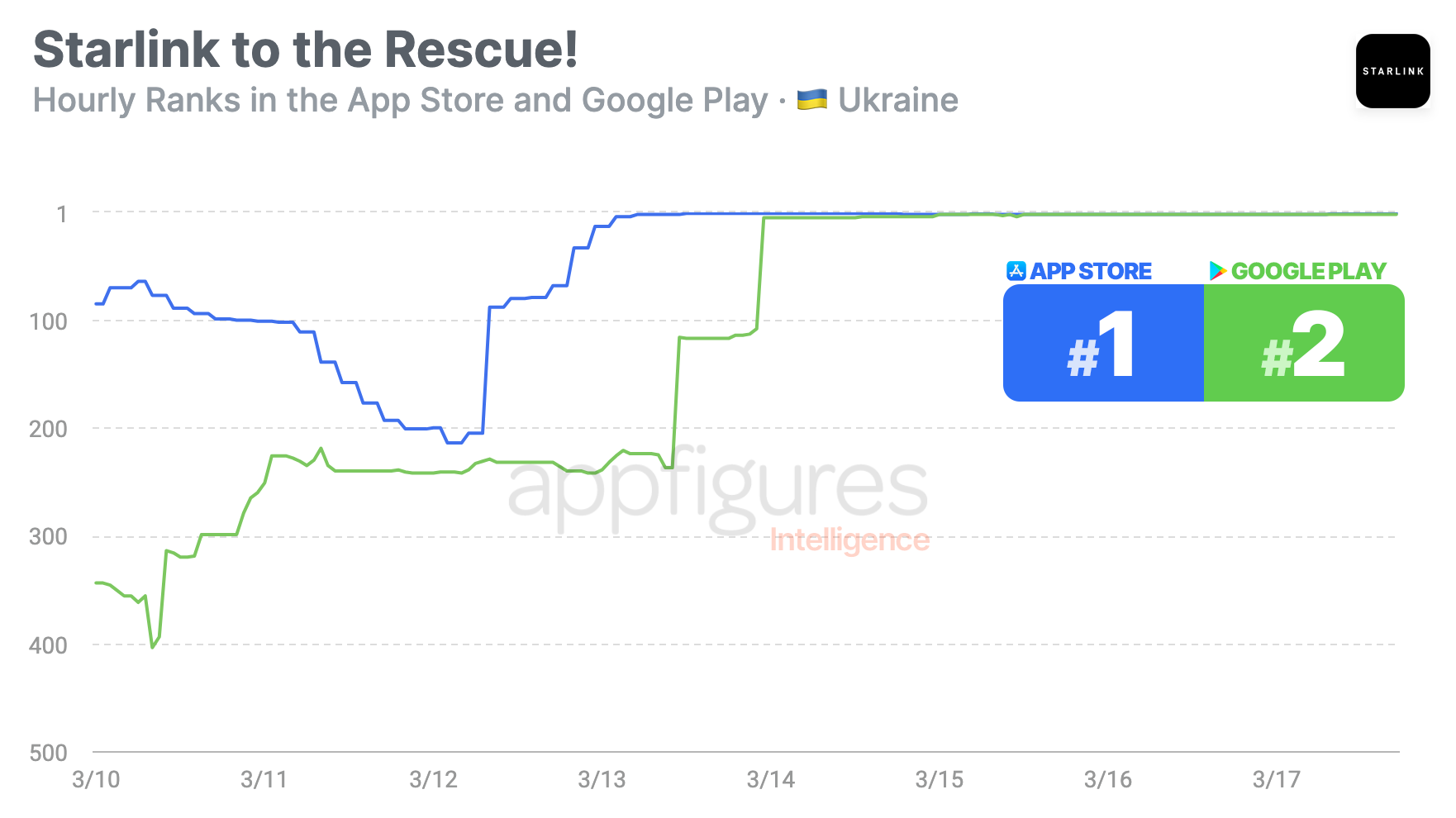 Downloads of Starlink, which was activated in Ukraine earlier in the month after an exchange on Twitter between Ukraine's vice prime minister and Elon Musk, have been on the rise.

In case you're not familiar, Starlink is an internet provider that normally connects places with little infrastructure using a satellite network owned by SpaceX.

It rose slowly since it was enabled in Ukraine on 2/26, but on Monday, which happened to be Appfigures' birthday, it reached the top of the App Store in Ukraine to become the most downloaded app. It reached the #2 spot on Google Play at the same time, where it still is right now.

War makes estimating downloads a bit more challenging, for obvious reasons, but even so, we estimate that Starlink saw more than 100K downloads in Ukraine since it became available on February 26th.

Not every download is a device activation, still, it's a whole lot of people regaining access to the internet! We're something similar on the other side, where millions of Russians who are blocked from accessing the internet downloaded VPN apps to regain access.

With Google Play somewhat crippled in Russia at the moment, I can't even imagine how much work Apple is doing to keep things going normally.

How's your bracket looking? March Madness tipped off this week, pushing a trio of apps to the top of the App Store. 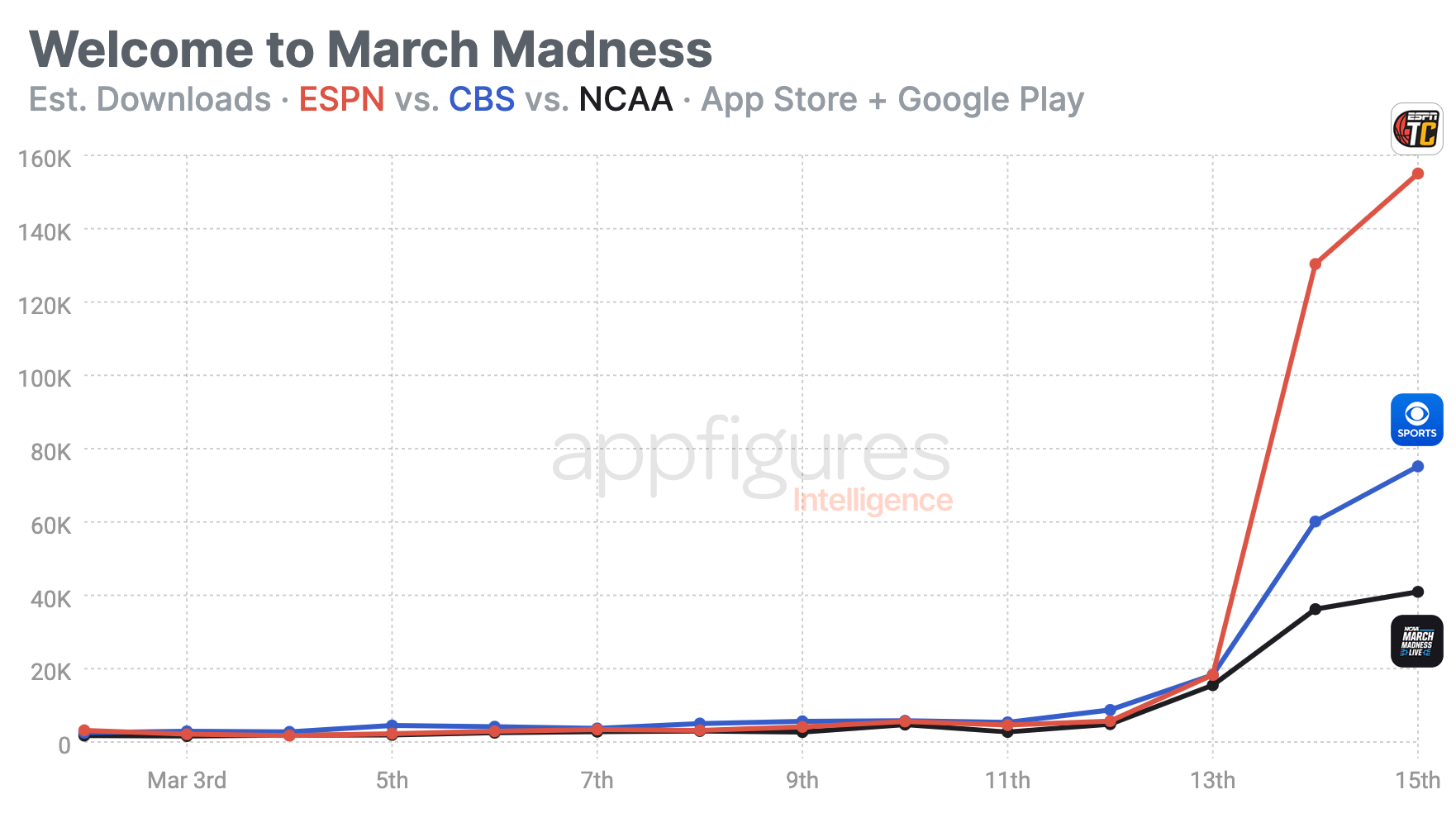 As of right now, ESPN Tournament Challenge, NCAA, and CBS Sports are the most downloaded apps in the US App Store. Not exactly the same on Google Play, but they're somewhere in the top 100.

Downloads of the three jumped sharply on Monday, with daily downloads growing more than 2,300% to 271K on Tuesday.

That's almost a half million new downloads, in case you're counting.

Looking back at last year's madness, it's ESPN that's winning this run with roughly twice as many downloads as it added in the opening week in 2021. CBS is netting a similar number as last year, but the official app is way behind, at a little under a half. There's still time, though.