This Week in Apps #122 - Mergers Or Acquisitions?

1. Why is ironSource Merging with Unity?

In case you're not familiar, Unity offers a cross-platform game engine and a built-in ad network for developers to monetize their games. irounSource is an ad network (though it calls itself a monetization platform).

Both make money from the same audience, which is game developers, making them competitors. Consolidation in this space isn't a new trend in a post App Tracking Transparency world, but what's interesting here is that both of these companies went public recently, and both saw their valuation drop significantly since. Even as revenue continues to rise.

While many look at this merger from a purely financial perspective, I want to take a look from the developer's perspective. I'll do that by looking at how many games are built with Unity and how many make money with either of these two monetization solutions.

The data I'll be using comes from our SDK Intelligence, in case you're curious. 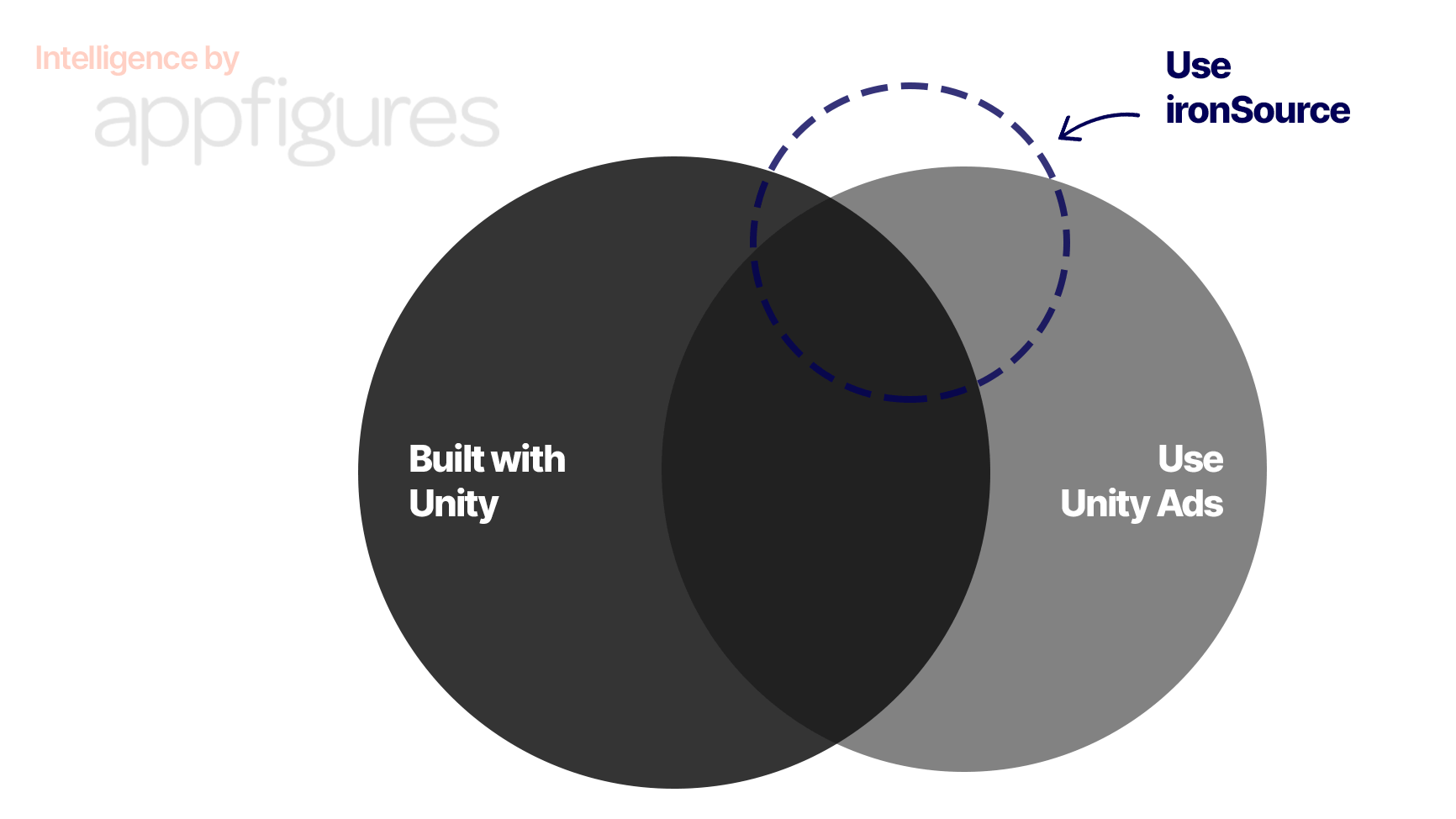 More than 285 thousand mobile games that you can download right now from the App Store and Google Play are powered by Unity. That's a lot of games! Unity's revenue model scales with success. Not all games are successful but looking at the list, there are many familiar names like Mario Kart and Call of Duty.

From the ironSource side, a merger means all of those games are now just a short email away from monetizing with ironSource's ad network. Or from the other direction, now ironSource can excite its advertisers with new inventory.

ironSource has a little more than 70 thousand games using its SDK to monetize across the App Store and Google Play. A little under a half are also built with Unity.

From the Unity side, a merger means... I'm actually not entirely sure. Roughly 260 thousand games utilize Unity's ad network, an impressively higher number than ironSource, and even more impressive is that this number isn't entirely made up of games using Unity's game engine. Only a little under half of those games are also built with Unity.

Many say this is a direct result of Apple's App Tracking Transparency crushing advertisers, which can be reflected by both of these companies' stocks declining since going public, and I believe it.

Is it better for developers? Probably. ironSource's innovative approach to monetiation, when built right into the game engine, could give developers an even easier way to make money, incentivizing more developers to make more games, which I'm all for.

But ads aren't the only way to monetize...

2. Ranking the Most Downloaded Games in June

This week I've crunched the numbers and ranked the most downloaded games in the world. If you're looking for apps, check out last week's episode.

Guess what? Hyper-casuals continue to dominate the chart in June. Even on the App Store... 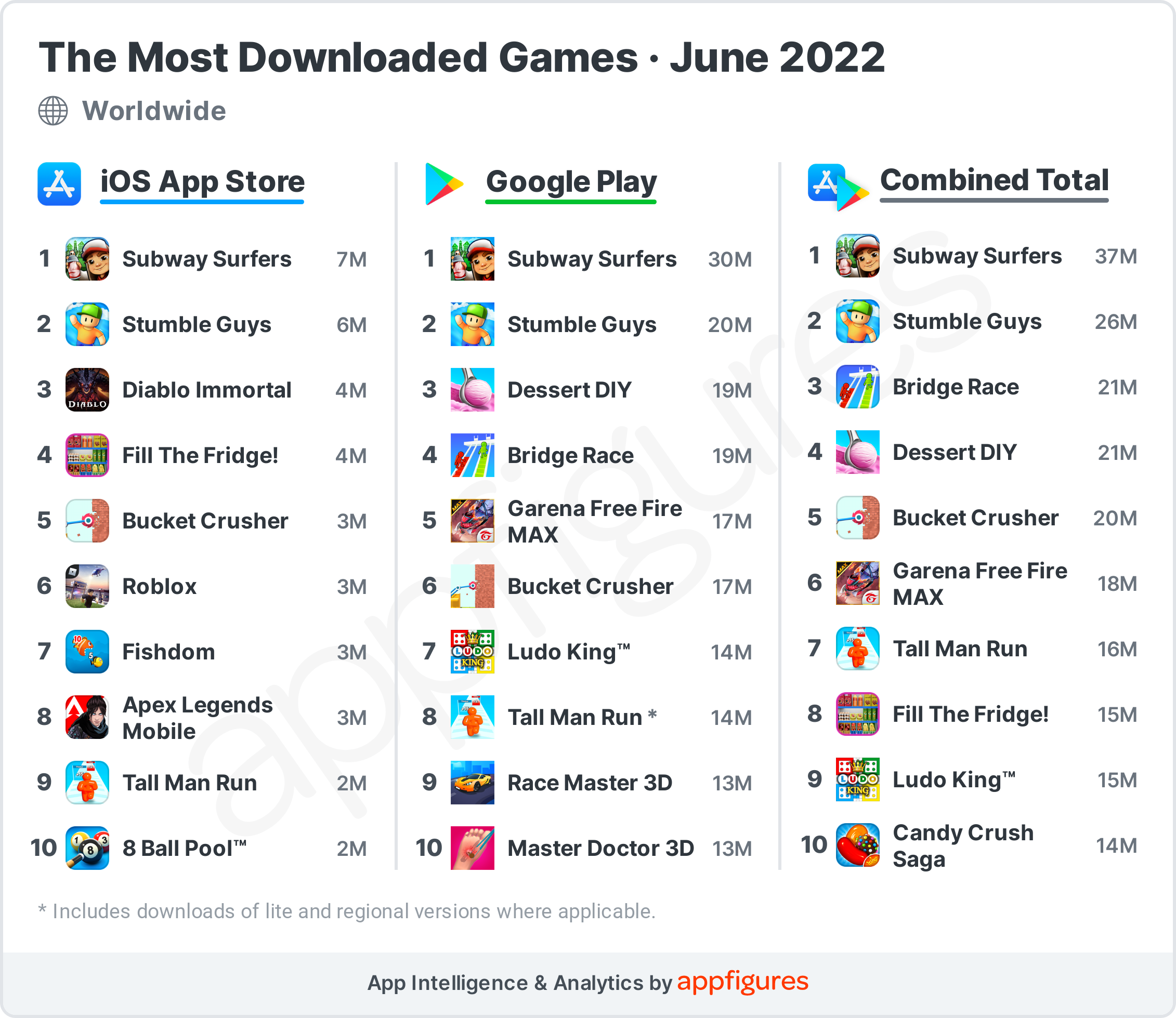 Hyper-casuals completed the top 5, which isn't really surprising. Garena Free Fire is, again, missing from this list as it's still banned in India. Sibling Free Fire Max continued to uphold its place, short about a million downloads when compared to May.

We estimate that together, the top 10 winners in June brought 202 million new players to their games, a slight increase over May's total, but not a significant one.

App Tracking Transparency has made it considerably more expensive to buy downloads eyeballs. We see companies continue to try, but even just looking at this total not growing significantly during one of the best months of the year, it's clear the ROI is lower (or negative) which makes it hard to continue.

A lot of attention is now given to Apple Search Ads, which offer an interesting alternative. But as with many tools Apple offers, they're far from perfect. We're working on something to help with that.

3. June Was Another Mega Month for the Highest-Earning Game in the US

This week I've crunched the numbers and ranked the highest earning games in the US. I mentioned this last week when I talked about the highest-earning apps, but I'll mention it again in case you missed it -- I talk about revenue in terms of the US because it's the largest market. If you want me to take a look at other countries in the future, let me know.

Let's have a look at the winners in June: 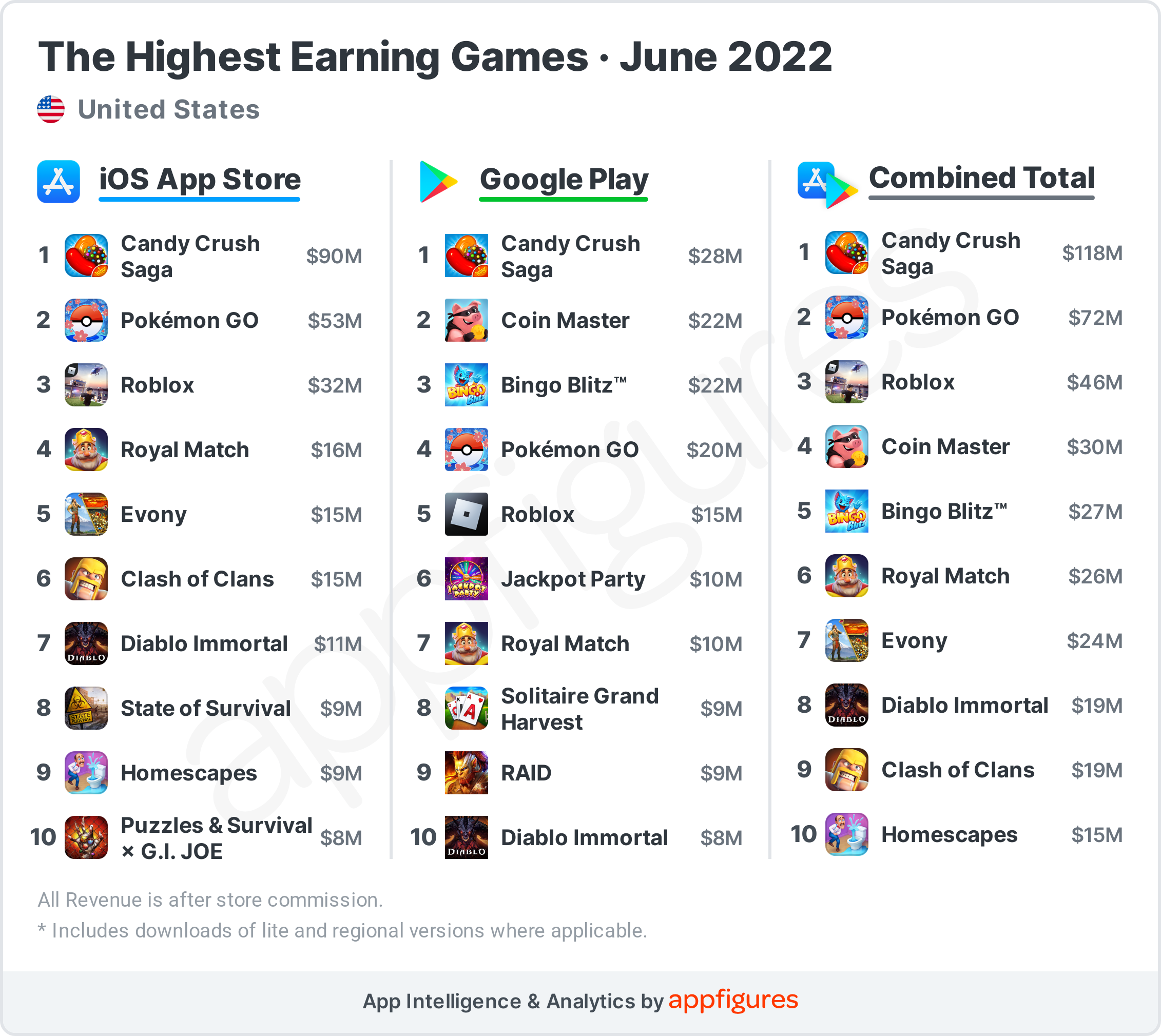 Candy Crush Saga was the highest-earning mobile game in the US in June. It topped the App Store, Google Play, and the combined list with an estimated $118 million in net revenue. Faaaaar from 2nd place Pokemon GO, which ended the month with an impressive haul of $72 million of net revenue.

In June, new(ish) non-hyper-casual Diablo Immortal joined the list, netting $19 million, according to our App intelligence. I've been watching Diablo Immortal as it finds its bearing on mobile and will cover it again when it hits $100 million in gross revenue, which will be happening very soon.

Roblox, Coin Master, and Bingo Blitz™ round up the top 5 in the combined list, which looks fairly similar to the list in both stores individually.

Together, the top 10 highest earning apps across the App Store and Google Play raked in a combined total of $396 million of net revenue in June. If you compare this to May's total, you'll notice a modest increase of about 6%.

And that's important, not because it's summer and summer means more kids are out of school playing games. Well, that too, but not entirely. This is important because it means that for games to win in a post App Tracking Transparency world, they must figure out a way to monetize without ads.

Crazy, I know! But if stagnant downloads and consolidation among monetization companies aren't enough to tell you that, in-game spending continuing to grow should.

National Slurpee fountain 7-Eleven is giving away free Slurpees for its birthday + its 95th birthday, and all you have to do is... download their mobile app.

If you've been reading for a while now, you know this is how chains like 7-Eleven have been promoting their apps in the last few years. It works pretty well when you have a signature item to give away, like chicken nuggets for McDonald's.

This isn't the first time Slurpees have been offered for downloads. But unlike previous summers, this giveaway was, by far, the most effective. 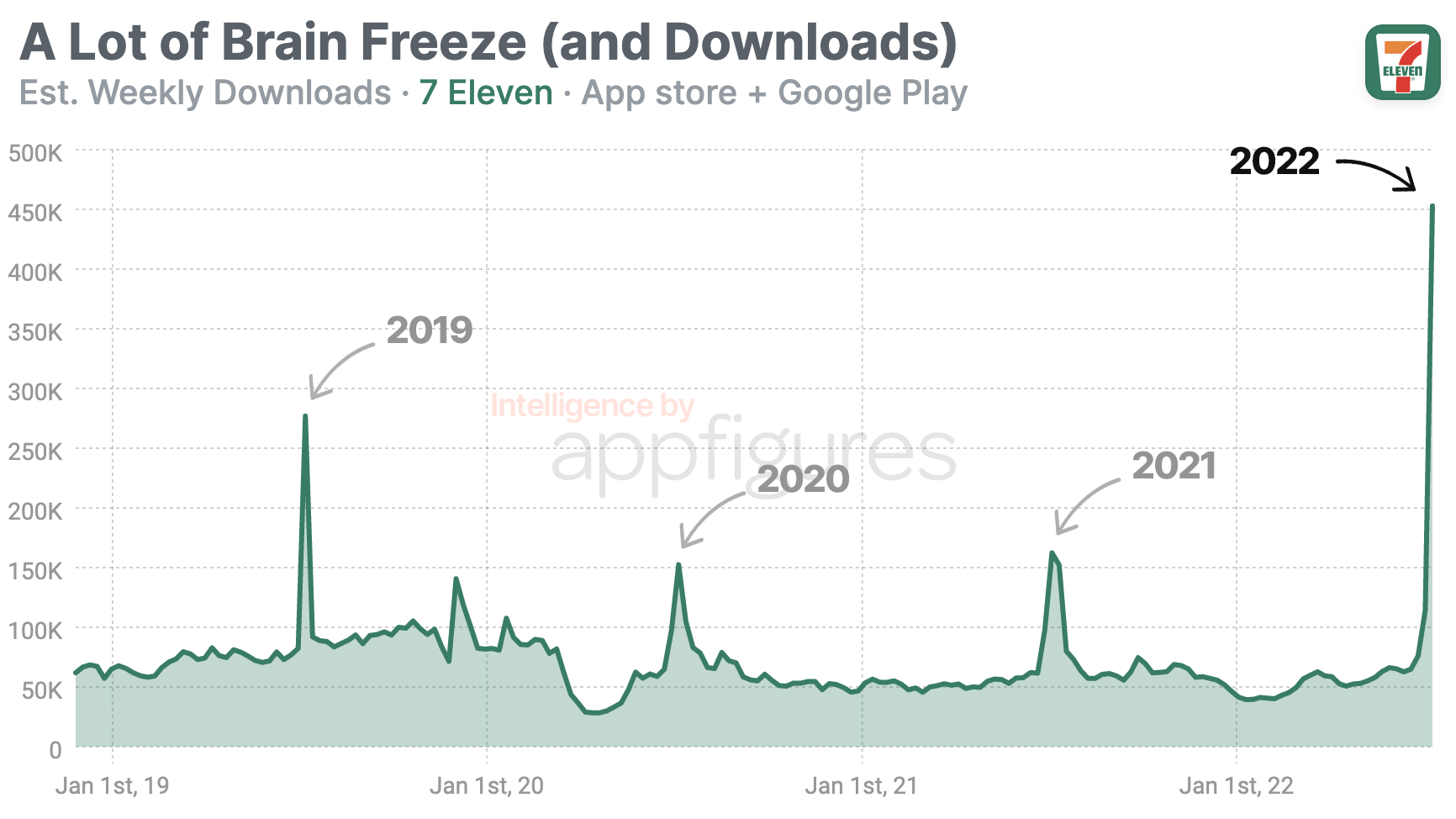 Let's set some foundation. 7-Eleven gets roughly 50,000 downloads a week across the App Store and Google Play, according to our estimates.

In 2019, the giveaway generated roughly 280,000 downloads during campaign week. A massive increase from the average.

Covid lockdowns have slowed downloads down in 2020 and 2021, where 7-Eleven saw 152,000 and 162,000 downloads, respectively, according to our estimates. But like many other IRL apps, 2022 was the year things go boom, and downloads certainly followed!

Our estimates show that this week downloads skyrocketed to more than 452,000, and that's not even the entire week! That's a gigantic leap over the best giveaway week back in 2019.

What I found interesting in this campaign is that through the app, you can have a free Slurpee delivered to you. That's right!

If you read between the lines here, you'll see that these chains are all in war right now. A war over digital mindshare, which really means the ability to push notifications to potential customers.

Although this isn't a new trend, it's obvious not all chains are executing on it as well, which means we as customers are going to undoubtedly see more promotions and more free stuff. But just like streaming last year, I don't expect this trend to last too too long.

I found an interesting trend where downloads of an app can be used as a proxy to what's going on IRL -- Traveling to Canada.

For many months now, the app has ranked very high in the US, beating popular names like Twitch and Tinder. Yes, that Tinder. 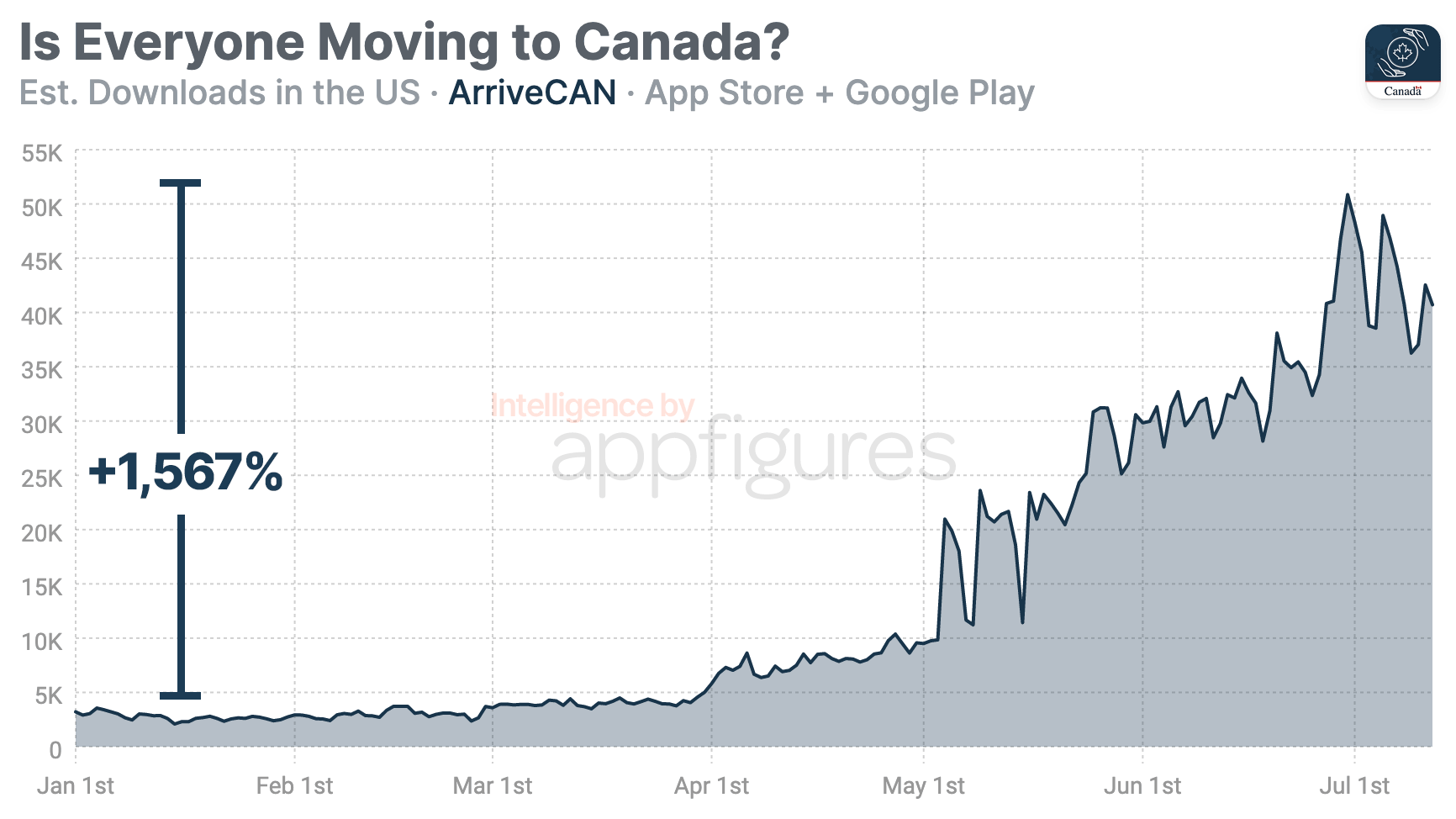 Just how many downloads are we talking about here? So far this year, ArriveCAN saw nearly 3,000,000 new downloads in the US, according to our estimates. But the trend is the more interesting bit.

This is a pretty extreme example of using downloads to proxy real-world things, but it's a pretty decent one in many cases. Consider that when you do your competitive analysis.