The last year or so turned news apps from something you know exists to something many use and often. Pandemic, politics, riots, wildfires. Should I continue?

We've looked at aggregators before (NewsBreak, Season 1), and today we'll be looking at a news channel: CNN.

We know that App Store searches boil down to intent, and news is one of those searches you can expect to see on the App Store just as much as you see on the web. That's why the keyword's popularity is a cool 63 and competitiveness is 96, with more than 100,000 results.

Overall, CNN earns an A-

CNN by the Numbers

Here's how CNN is performing in the U.S. App Store, based on our App Intelligence:

News apps tend to come and go as needed. In the last few years, we saw consumption of news grow due to an array of events, both local and international. Lately, however, it seems more and more people are all newsd out. 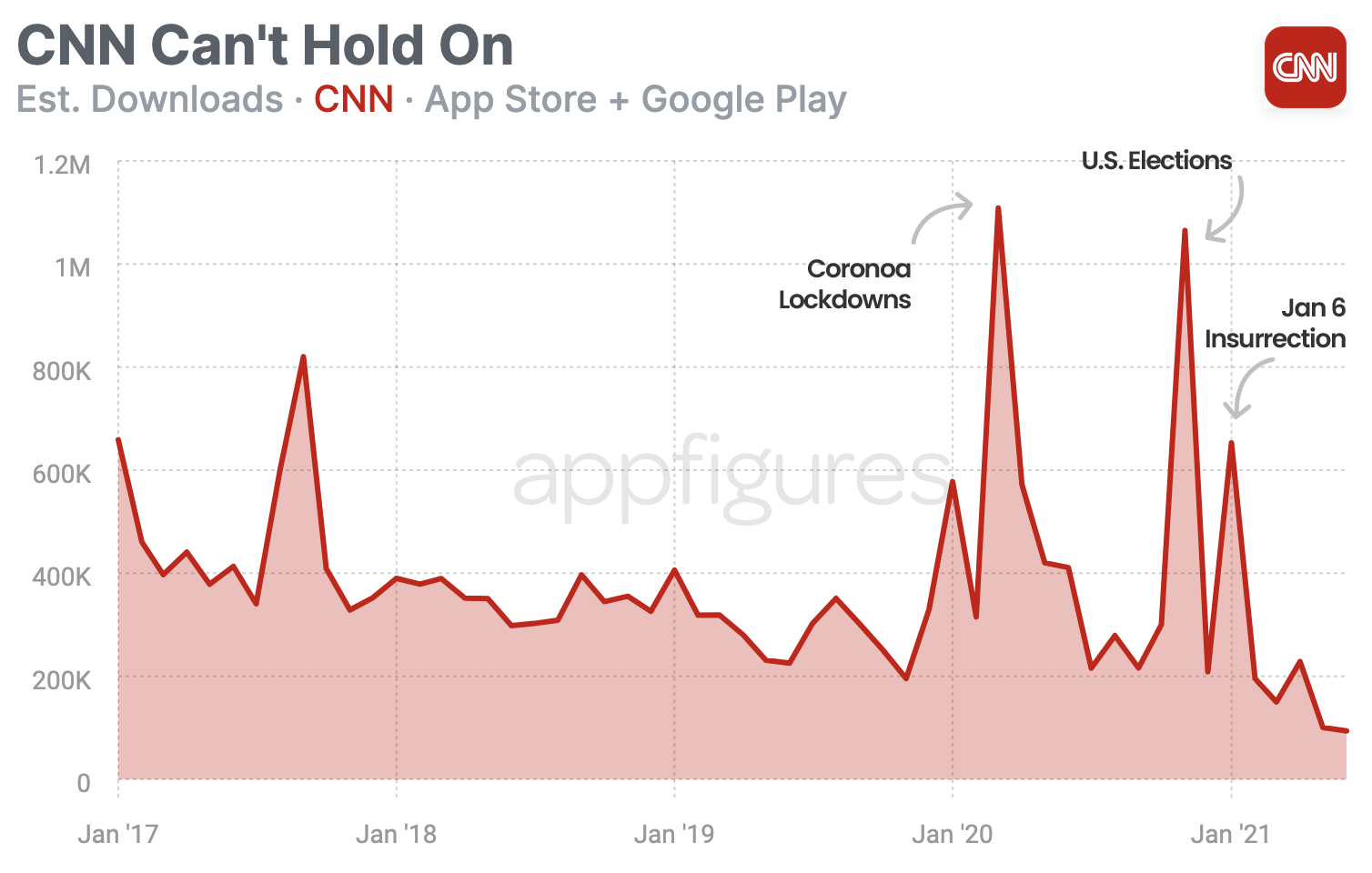 Since 2017, CNN was downloaded by more than 20M new users worldwide across the App Store and Google Play. That's a pretty serious number but look at that trend. Over the last four years, new downloads have decreased by 75%.

While the trend is similar for rival aggregators, the slope is a lot different, as are the spikes. That suggests CNN's downward slope isn't just a result of people having enough news in their life.

FYI - I'm working hard to focus on the ASO side of things and leave politics for someone else to comment on. It means I'm going to purposely ignore possible reasons for this downward trend. But, I looked at Fox's app, and the trend is fairly similar, so this is less about picking sides and more about the shifting consumption patterns, which seem to be favoring aggregators across all age groups.

CNN vs. the Competition

CNN's competition is fierce, and that's because platforms owners like Apple and Google, aggregators, and rival news creators are all fighting for attention from (mostly) the same people. There's only so much news one person can consume. 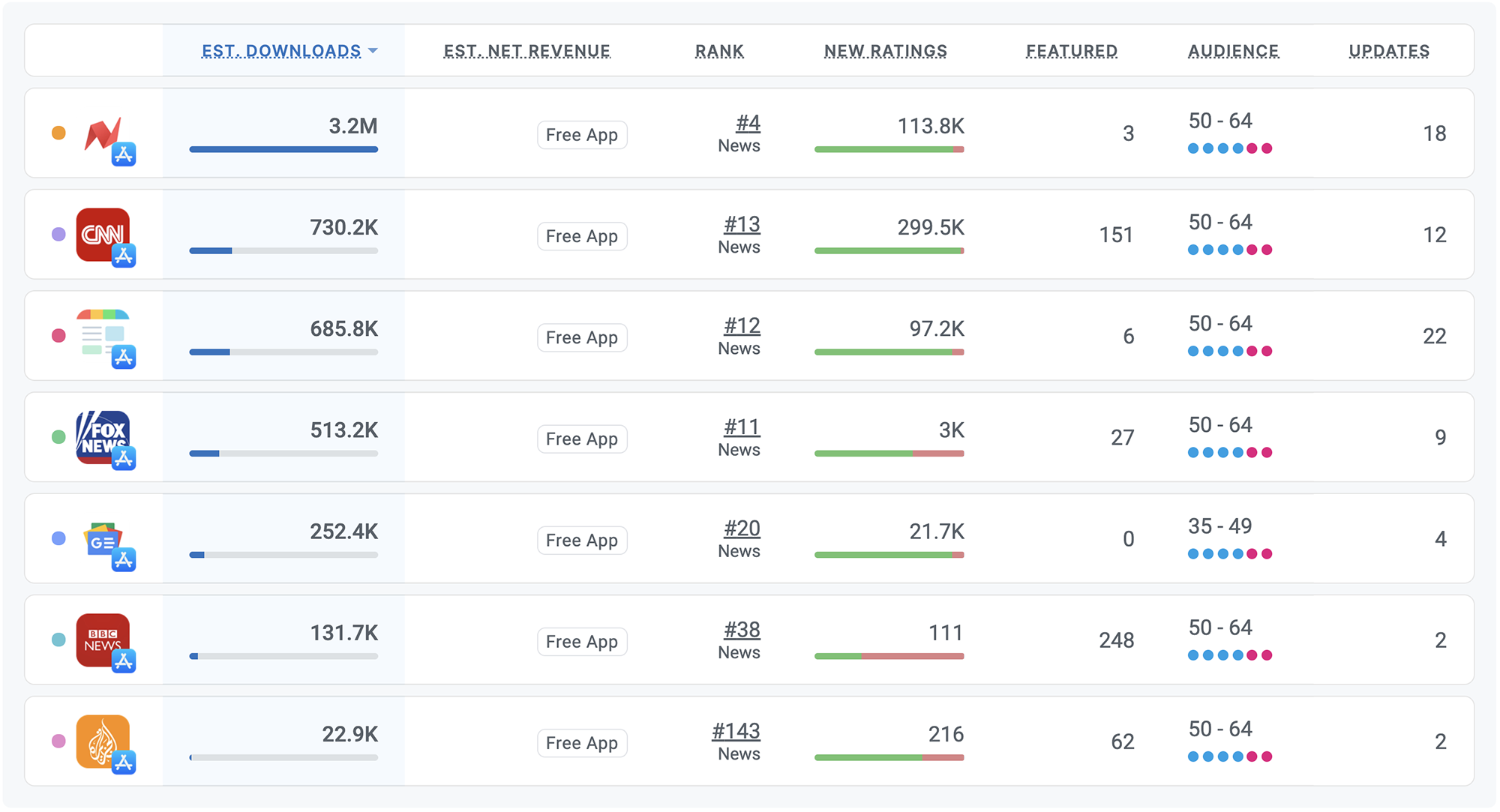 The race in the U.S. App Store is fairly close. Well, all but the top and the bottom, that is. CNN leads the rest so far this year in the U.S. App Store with almost three-quarters of a million new downloads. And while it's second in downloads, it's the first in new ratings, and they're extremely positive. It also seems Apple loves it the most and features it much more than the rest.

CNN is in a great position, but as we can see from NewsBreak (which we analyzed in season 1), there's a lot more potential.

How is CNN Found in the App Store?

Every now and again, we come across an app that competes with a native one from Apple. That's the case for CNN, which competes with Apple News. Competing with the platform is always a challenge, but even given this hurdle, CNN manages to rank in hundreds of keywords. 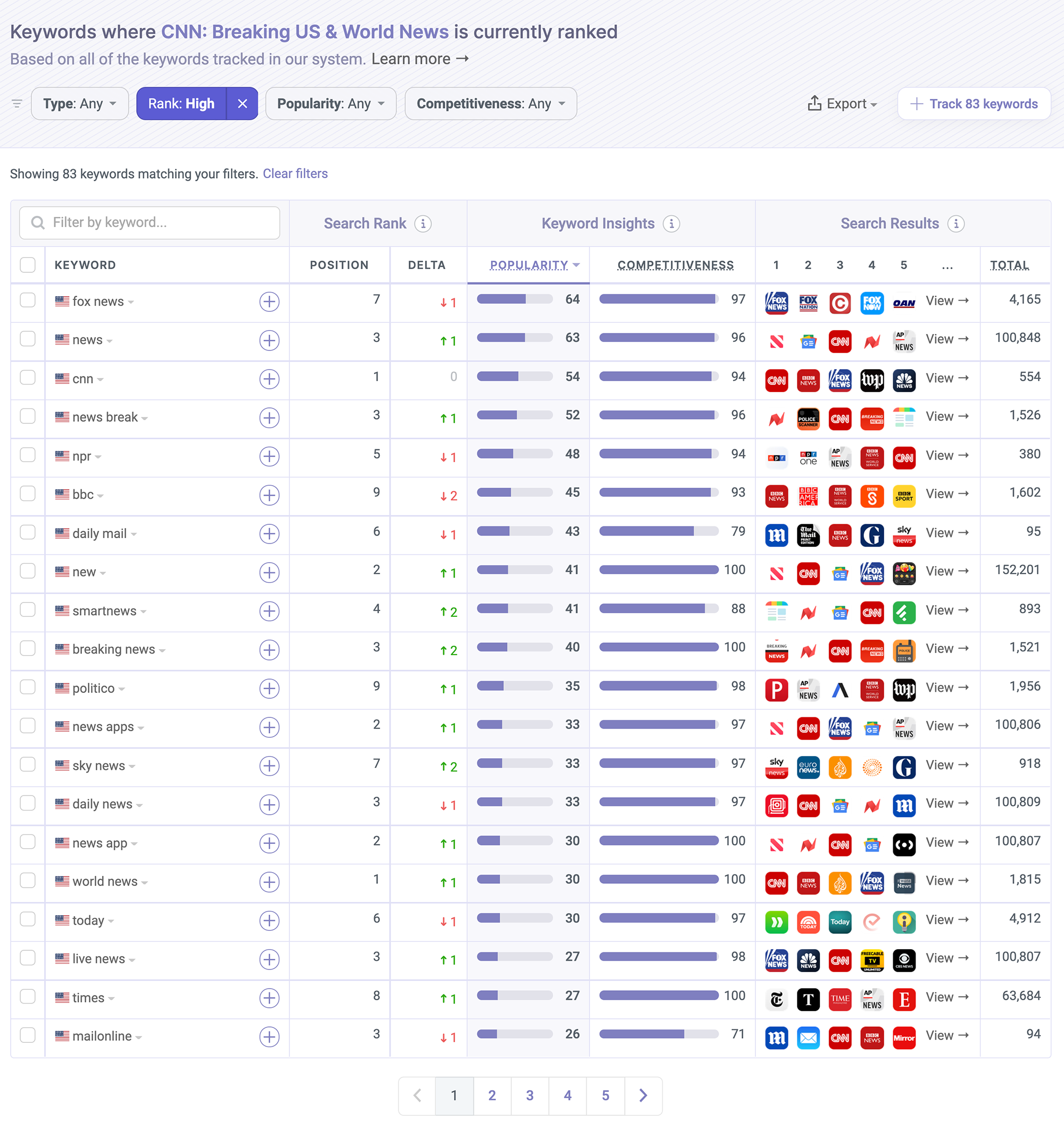 The good news here is that news is not too hard of a term to focus on. Puns aside, focus and downloads are what's driving this keyword list. Keep reading to see how this happened.

Let's dig in by looking at the keywords CNN is targeting in its name and subtitle. Those two send the strongest signals to the App Store's algorithm.

CNN managed to pack a lot into 56 total characters, and both the name and subtitle are very readable. That's pretty nice! Unlike last week's Teardown of iHeartradio, CNN's keywords are all focused and combine very well, which is why the list isn't small. 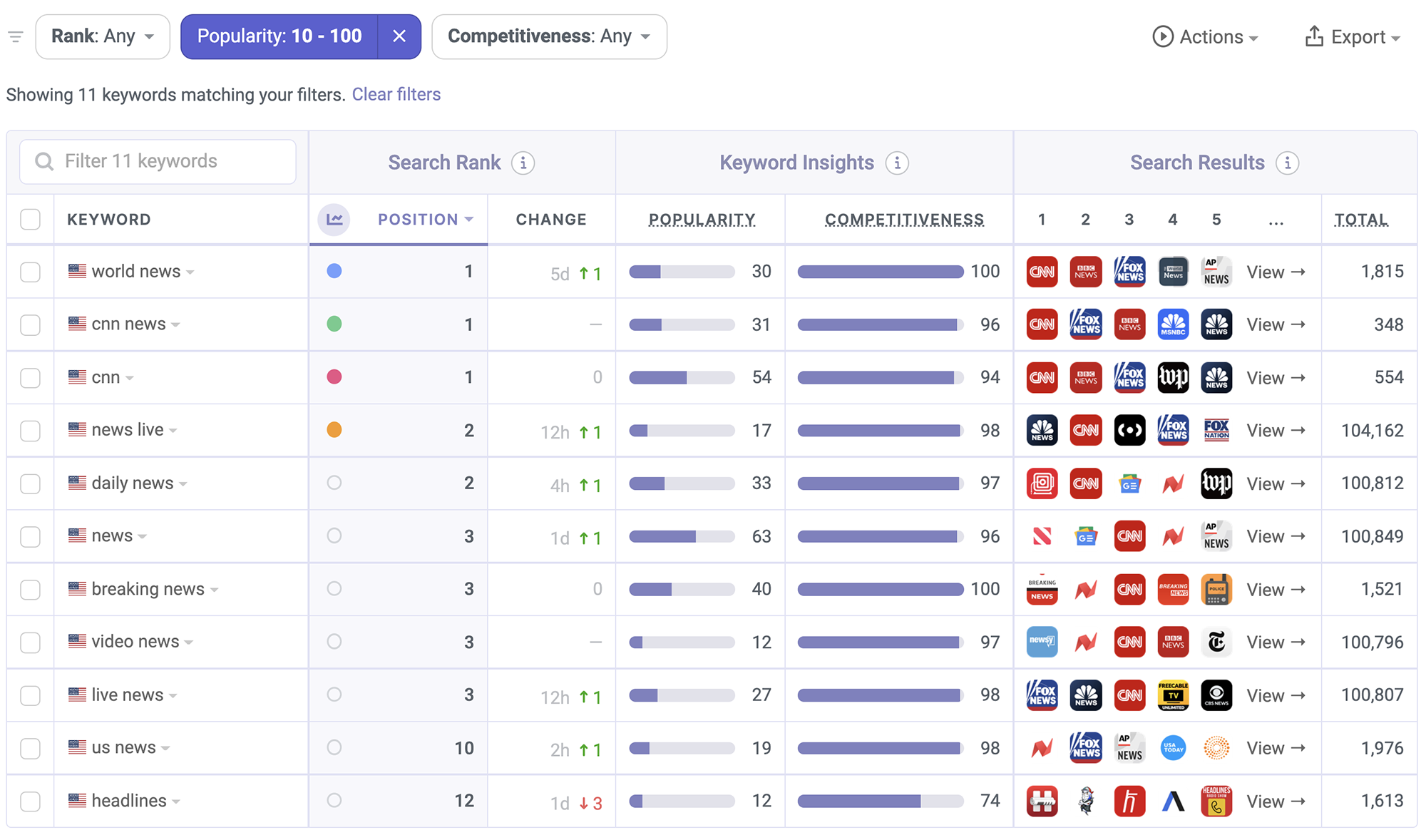 While there are quite a few combinations that aren't popular, the ones that are, have CNN ranking fairly high, right behind Apple's own news app and Google's news aggregator.

Much like the well-crafted name and subtitle, the keyword list seems to be a result of some thinking. Let's split this one up into groups. There are only two:

This is a very targeted approach, and every single word in this list combines well with at least one word from the name and the subtitle, guaranteeing a much wider footprint with the algorithm.

You'll notice all the "good" keywords aren't in the keyword list but rather in the app's name or subtitle. Good.

But... if you check some of these combinations, like local news, you'll find CNN in the results, but with a not-so-great rank (#16). That's because spreading thin like that gives the algorithm the right signals, but the keyword list on its own doesn't have enough strength when it comes to very competitive keywords (97).

Tip: There's a good way to a wide approach like this. Use a keyword list that "shoots aimlessly" to find which keywords the algorithm picks you up for, then in your next update, target the most popular ones through the name and subtitle.

That means CNN could include local in the app's name or subtitle and most likely rank in the top 5 right away.

No video. Moving on.

Normally I'd suggest a video would be helpful to stand out, especially for a company that's all about video, but I'd really start to sound like a broken record, so I'll skip it.

I have mixed feelings about this set. 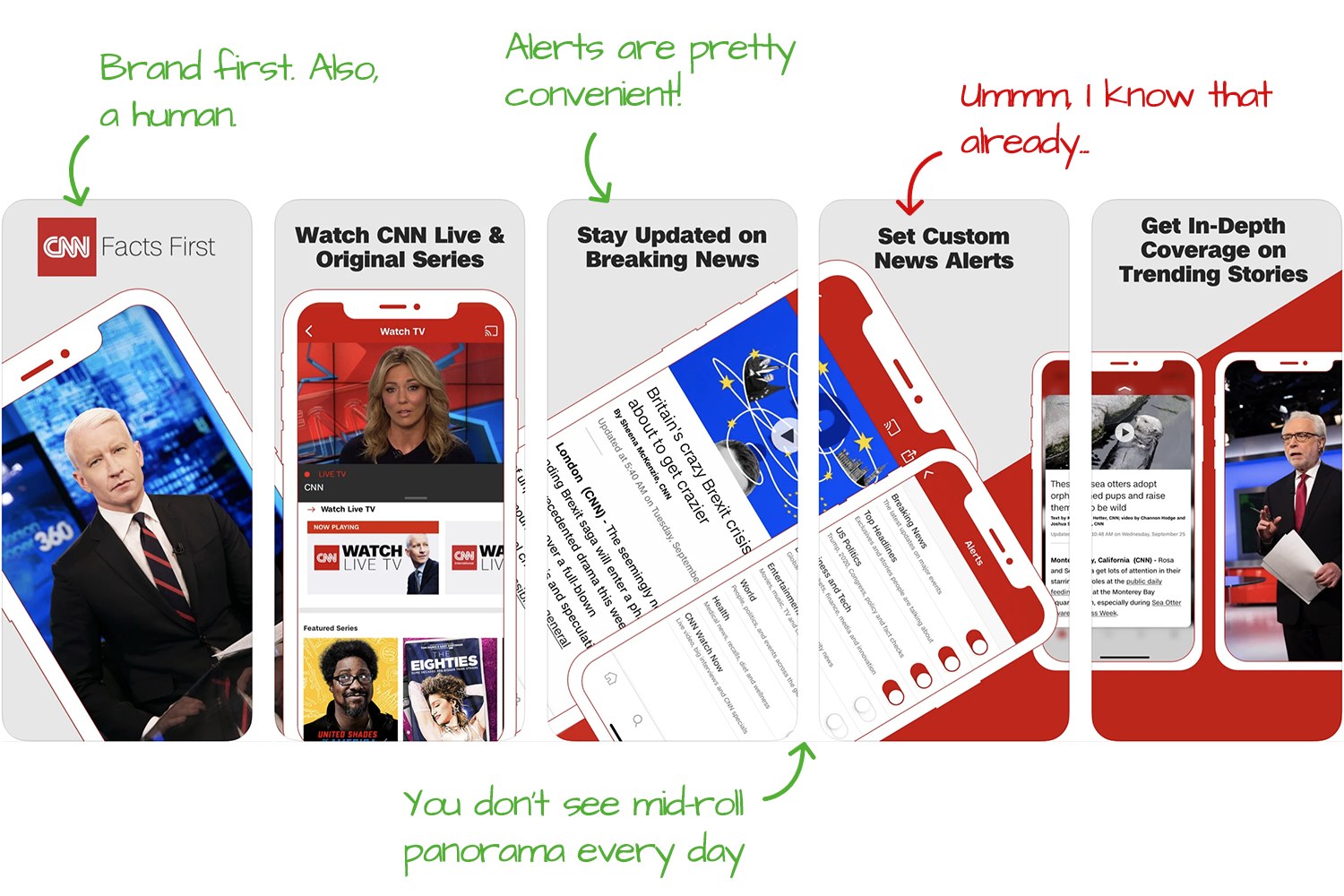 Let's start with the good, it checks most of the boxes, looks pretty sleek, and the colors and captions are working. What I think is a missed opportunity is not using more screenshots. You may think CNN is so well known that it doesn't need to think about page conversion. That would mean every page view turns into a download. I doubt that's happening.

Remember, screenshots tell a story, so more screenshots = more opportunities to highlight something the user may need.

The lesson here is that you shouldn't skip out on screenshots unless your page views = downloads. If that's the case for your app, and you actually have significant downloads, I'd love to hear about it.

Not done, unfortunately. There's another cardinal sin here. If you haven't spotted it already, it's hiding in the captions. Remember all those keywords CNN was targeting before? Do you see them in the captions? Not really...

The captions of screenshots reinforce the search intent. If they're not there, they can't do that.

Overall, these screenshots are really doing the bare minimum to help downloads. I think CNN should seriously consider an overhaul. Luckily, A/B testing is coming soon in iOS 15!

What Data is CNN Collecting?

In this new(ish) section, we look at the privacy labels apps declare on the App Store. CNN is definitely collecting, but considering it's a free app, it's not too bad.

This one's pretty straight forward. I imagine location ties to ads, which would become much less relevant without knowing where the user is from. Until iOS 15, even after turning off location, ad networks could still roughly know where a user is based on their IP. With Private Relay, this will no longer work, which throws another blow to ad servers.

Here are the SDKs and APIs we see powering CNN:

That's a whole bunch of things to have in an app (and a new layout!) but overall, not very surprising. CNN is built with React Native, which is a perfect fit for this type of app and gives the team the ability to deploy across platforms quickly.

I see a few analytics SDKs, optimization, and engagement. That means CNN is actively working to acquire and retain users. When it comes to household names, I tend to expect more and get surprised when they don't do enough. This isn't the case with CNN, which seems to do and do some more.

But wait, what's missing here? Facebook! Not a single SDK from Facebook. Not surprising, but nice to see. All of the apps we looked at recently had at least one of the many SDKs Facebook offers.

The Verdict: Did You See That?

If you've read so far, you know that CNN isn't fighting the obvious competitors on the App Store, but instead, the apps that use its content. Is that a fair fight? Maybe. But that's not really the question.

The real question for CNN is how to get as much visibility as possible. Paid ads, sure, but with ASO, they can do more for less, and judging by this analysis, they attempt to take as much advantage as possible.

Hopefully, you've learned a few new tricks to improve your own ASO. If you take one thing, however, let it be that keywords in the name, subtitle, and keyword list need to combine. That'll take you pretty far.

The Tools I Use for ASO & Competitor Intelligence