Coinbase, a trading app for Bitcoin and other cryptocurrencies, IPOd last week. I've been using Coinbase for a long time now, and have been following financial apps for enough time to know that Coinbase is a well-oiled machine when it comes to App Store Discovery.

In this App Teardown, we'll analyze Coinbase's performance over the years, the competitive landscape, its keyword strategy, and on-page visuals with the goal of learning from their success so you can achieve it yourself.

Overall, Coinbase earns an A+

Coinbase by the Numbers

Here's how Coinbase is performing in the U.S. App Store, based on our Competitor Intelligence:

2021 Will Be Coinbase's Biggest Year to Date

Let's take a look and see how Coinbase got to nearly a million monthly downloads in the U.S. App Store. Here are downloads, across both platforms and globally, over time. 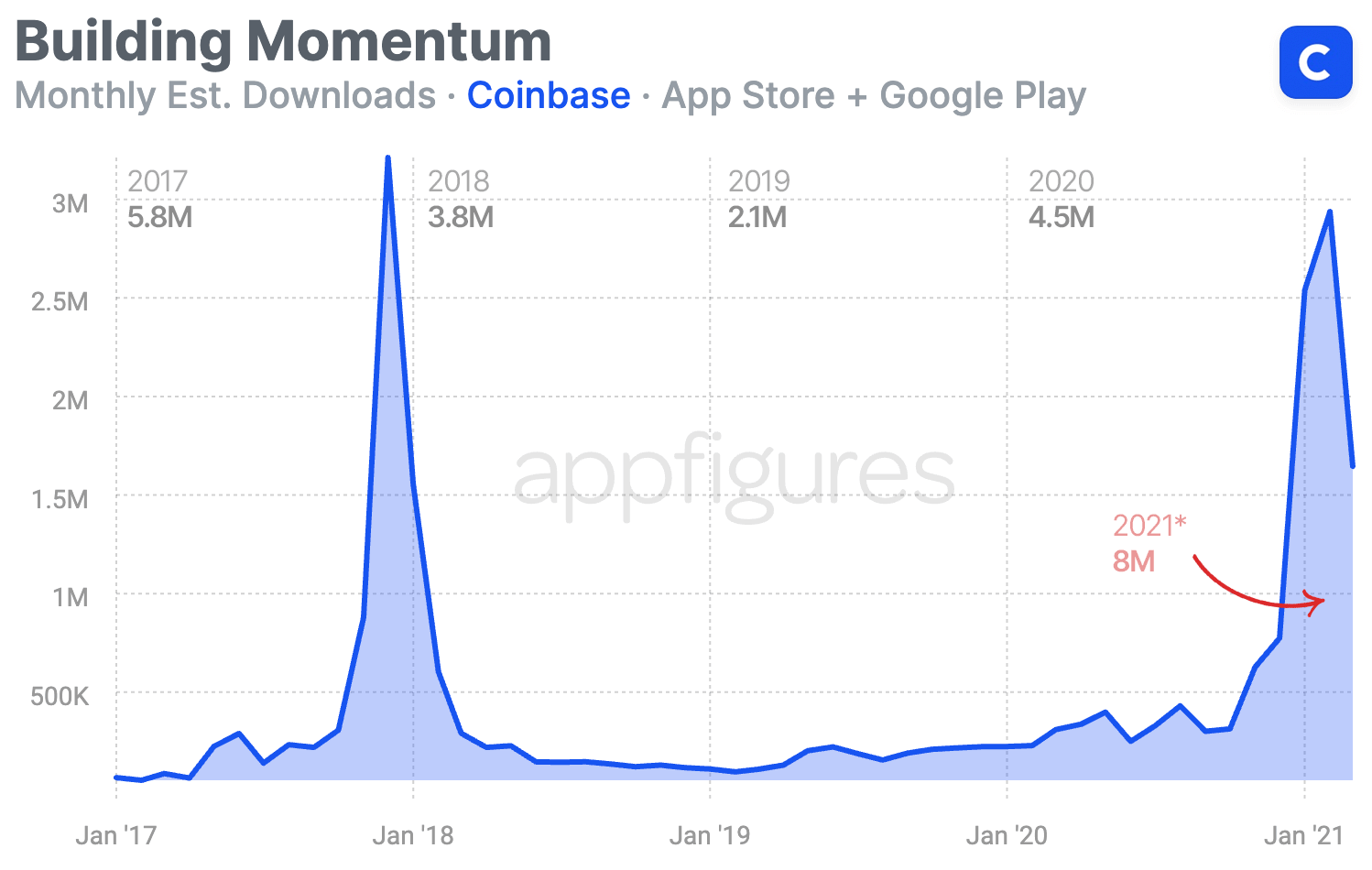 It's fairly obvious that downloads are correlated to interest in cryptocurrency, namely Bitcoin. When Bitcoin makes the news, Coinbase sees a surge of new downloads. We can see it back in 2017/18, and then again in 2020/21.

Some may see it as a negative, but if you think about how adoption for cryptocurrency is rising, Coinbase being the most obvious place to trade Bitcoin and other such currencies is a huge positive, and one that's making competing with Coinbase very difficult.

That's primarily why it was able to IPO, and where investors see future gains.

Coinbase vs. the Competition

Competition for Coinbase isn't as straightforward as for most other apps we've analyzed before. While there are other apps with the same features, the real challenge for Coinbase is getting more people to understand what crypto even is.

Judging by the numbers, the Coinbase team fully understands its challenge!

Competition is stiff. According to a search in Explorer, there are 630 apps with "bitcoin" in their name. That's a lot of competition. But even so, the most downloaded ones are the ones I've collected above.

Of that collection, Coinbase is by far the top dog. With a polished UI and sleek marketing, Coinbase has made owning cryptocurrency as easy as Robinhood made owning stocks.

But if we skip Coinbase for a quick minute and instead focus on the rest, it's obvious that the rest is fairly close. Eventually, some of those competitors can merge to give Coinbase a good run for its money. IPO and all, Coinbase's top position isn't really guaranteed in any way.

How is Coinbase Found?

We've got a pretty good idea of the competitive landscape and the environment Coinbase exists in. Now, let's dig into its ASO strategy, starting with a high-level overview of where Coinbase shows up in the App Store, which we can get from the Discover Keyword report.

Coinbase is found in the top 10 results of nearly 100 popular keywords in the U.S., which is quite a few if you compare it to other apps we've analyzed. Really earning that A+!

We'll dig deeper into how it managed to do that below, but to see the impact of great ASO, here are just keywords mentioning "bitcoin," a very important keyword for Coinbase: 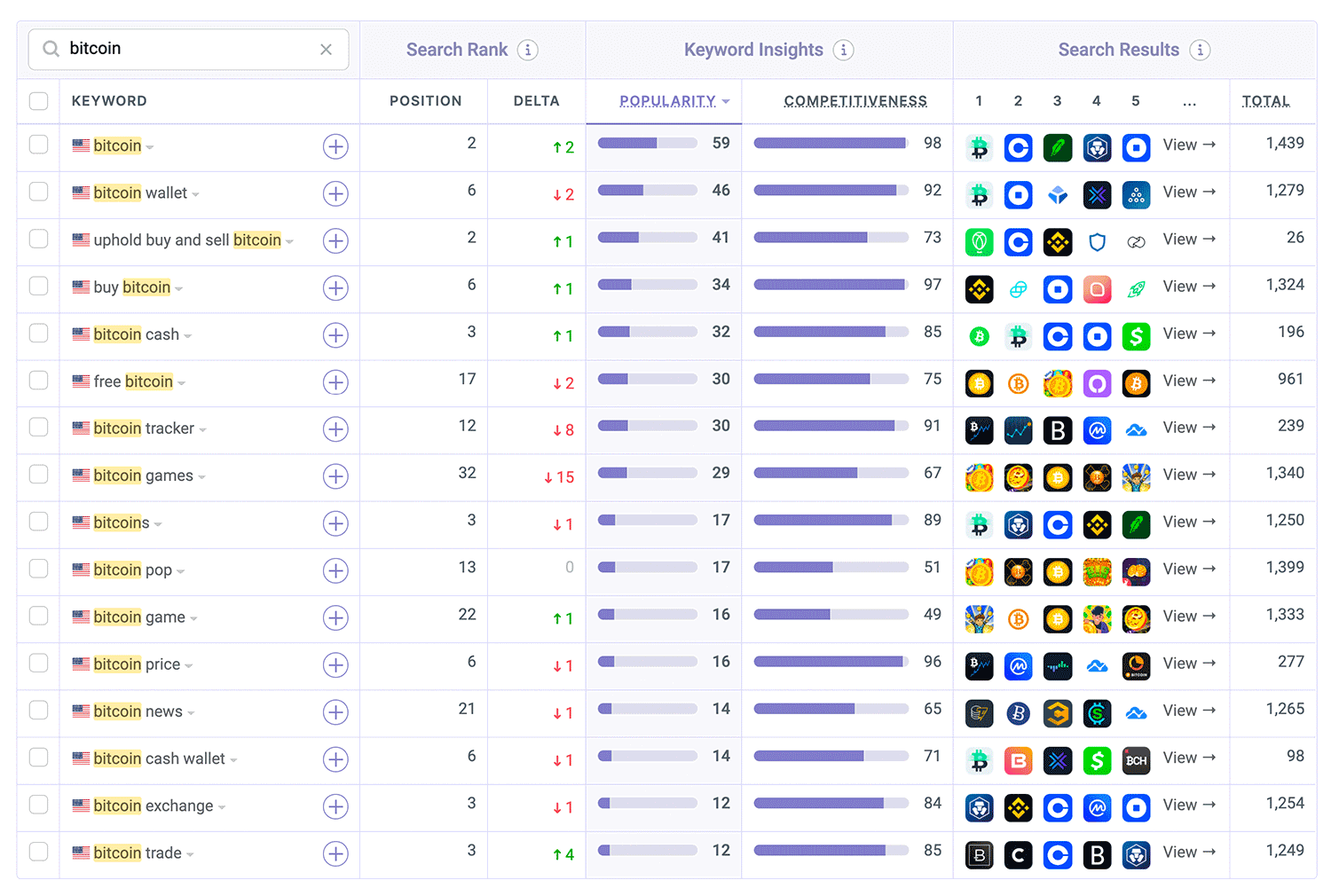 This is a really great example of what good ASO looks like in the wild. By that, I mean, when the keywords in the name, subtitle, and keyword list combine so well they generate a lot of strong signals to the App Store's algorithm.

Let's dig in by looking at the keywords Coinbase is targeting in its name and subtitle. Those two send the strongest signals to the App Store's algorithm.

Concise but comprehensive, if I had to describe this list quickly.

This list holds the main and moot relevant keywords that are popular in the crypto space, from the most popular currency, to where you store it.

I have no doubt this name and subtitle combination is the result of careful consideration, research, and even iteration. It may "make sense" for some of you just by looking at the space, but there are so many bad combinations.

Pro tip: The period at the end of the subtitle is a "hack" where some believe Apple drops the last characters of the subtitle, so introducing a character that is dropped anyone ensures the last keyword is recognized correctly. I can't say for sure this is the case here, and it might be that whoever wrote this wanted to be proper, but I suspect grammar isn't the case.

Coinbase's main benefit is the ability to trade cryptocurrencies. Bitcoin is the most popular, so it's in the app's name, but there are other popular (enough) cryptocurrencies that people search the store for, including Ethereum, Bitcoin Cash, Litecoin, and very recently, Dogecoin.

Coinbase seems to be targeting all of those, as well as their currency codes, in the keyword list. This is a great strategy given how optimized the app's name and subtitle are and how well they combine together.

In addition to currencies, we also see some of the less important features of the app mentioned, which makes perfect sense and combines very well with the currency names and code, as well all the actions from the name and subtitle.

This is a great way to really amplify what the algorithm sees, which means more discovery. Well done Coinbase!

So far, Coinbase’s has been doing a good job with their ASO, and their screenshots push that good to great!

There’s no video, which I think could help a bit, and a competitor has one, but it’s hard to fault them for this, given how well thought out everything else is. 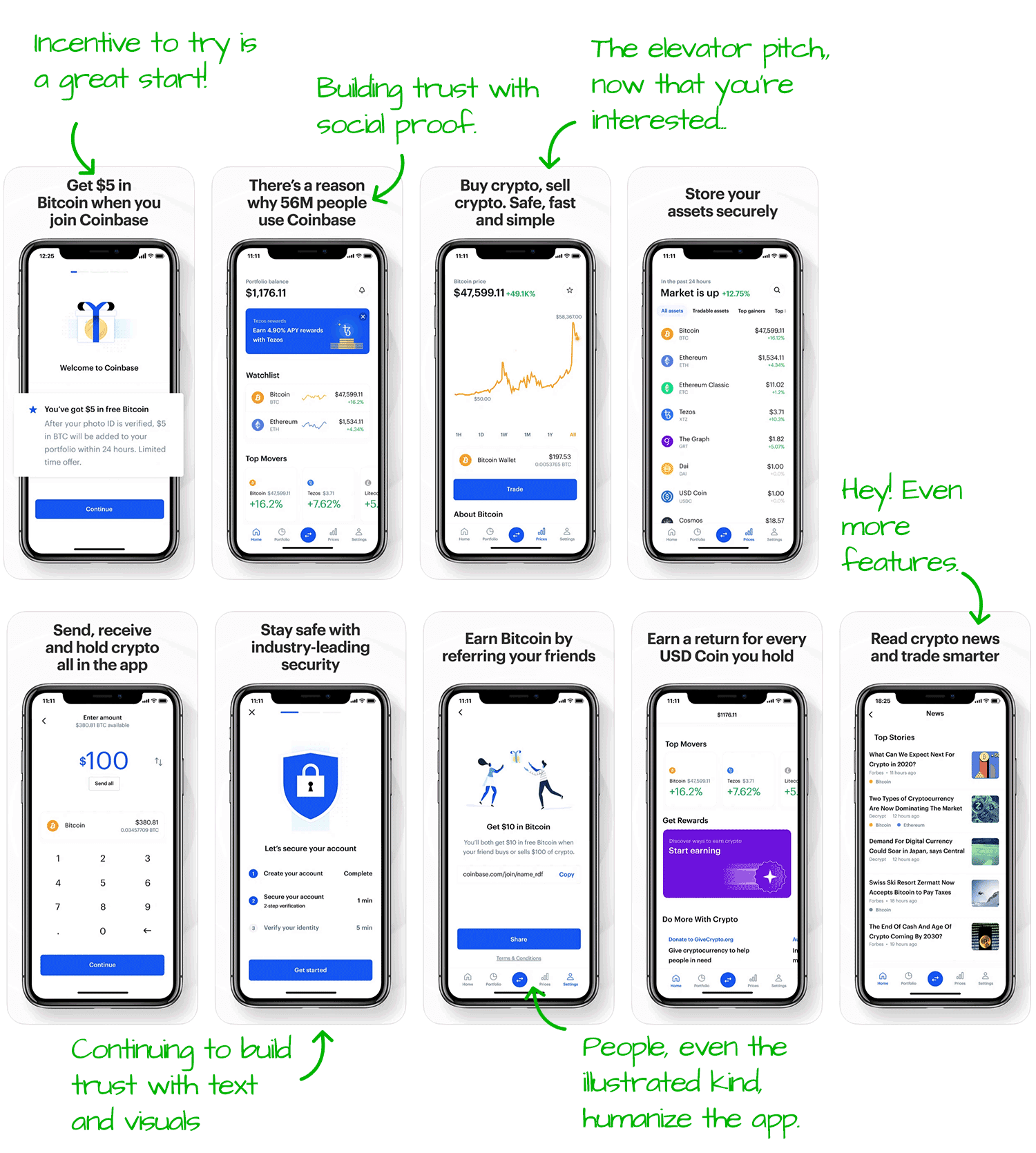 There’s a lot of great here, so let’s break it up:

This is a really great set of screenshots, and I wouldn't be surprised if it was tested over enough time and iterations and didn't just happen on the first attempt.

What Data is Coinbase Collecting?

In this new(ish) section, we look at the privacy labels apps declare on the App Store. Coinbase is definitely collecting, but considering it's a free app, it's not too bad.

Coinbase seems to be asking for a lot here, from financial info to usage data and sensitive data, a blurry label. However, when you think about the nature of Coinbase's business, all of these make sense.

A user exchanges money through the app, which explains the need for identifiers, purchases, and financial info. The rest, again, make sense in the same context.

This is why privacy labels have to evolve to give insight into how these are all used and not just that they are collected. But... I've ranted about this more than once before, so I'll spare you this time.

Here are all the SDKs and APIs we see powering Coinbase:

Glancing over this short list we can quickly tell Coinbase is non-native (React Native) and that it's spending on ads (AppsFlyer), both make sense for this type of app and service.

It's using CoreLocation, but its labels don't include location data, which is interesting. However, that can probably be easily explained by the need for fraud detection that may not be tied to personal data, so it's safe.

The bottom line: Coinbase's SDK list is pretty clean for such an active app.

The Verdict: One Now a Million Later

Coinbase changed how we, mere mortals, think about cryptocurrency. They've made it accessible and legitimate. That's no easy task. Sure, market conditions, support from popular celebs, and the opportunities for amplifying money helped, but Coinbase right at the center.

Evidence? When a cryptocurrency is in the news, be it a popular one like Bitcoin or a joke one like Dogecoin, Coinbase is the one who gets most of the downloads.

Discovery plays an important role for a service like Coinbase that's slowly growing into the only one of its kind most people will know, and every iteration right now will yield exponential results in the future.