Do you like karaoke as much as I do? Maybe. And we're not the only ones. Karaoke is a big business, and at the top sits Smule, makers of one of the first gimmick apps for the iPhone back in the golden days.

Smule Karaoke is one of the most polished karaoke apps in the App Store and gets the most downloads and revenue in the U.S. It also features many well-known singers and is the app we'll be analyzing in this Teardown.

Smule Karaoke by the Numbers

Here's how Smule Karaoke is performing in the U.S. App Store, based on our App Intelligence:

2021 has been a fairly quiet year for the app that wants you to get loud. Well, until TikTok decided it's amusing to share karaoke videos. 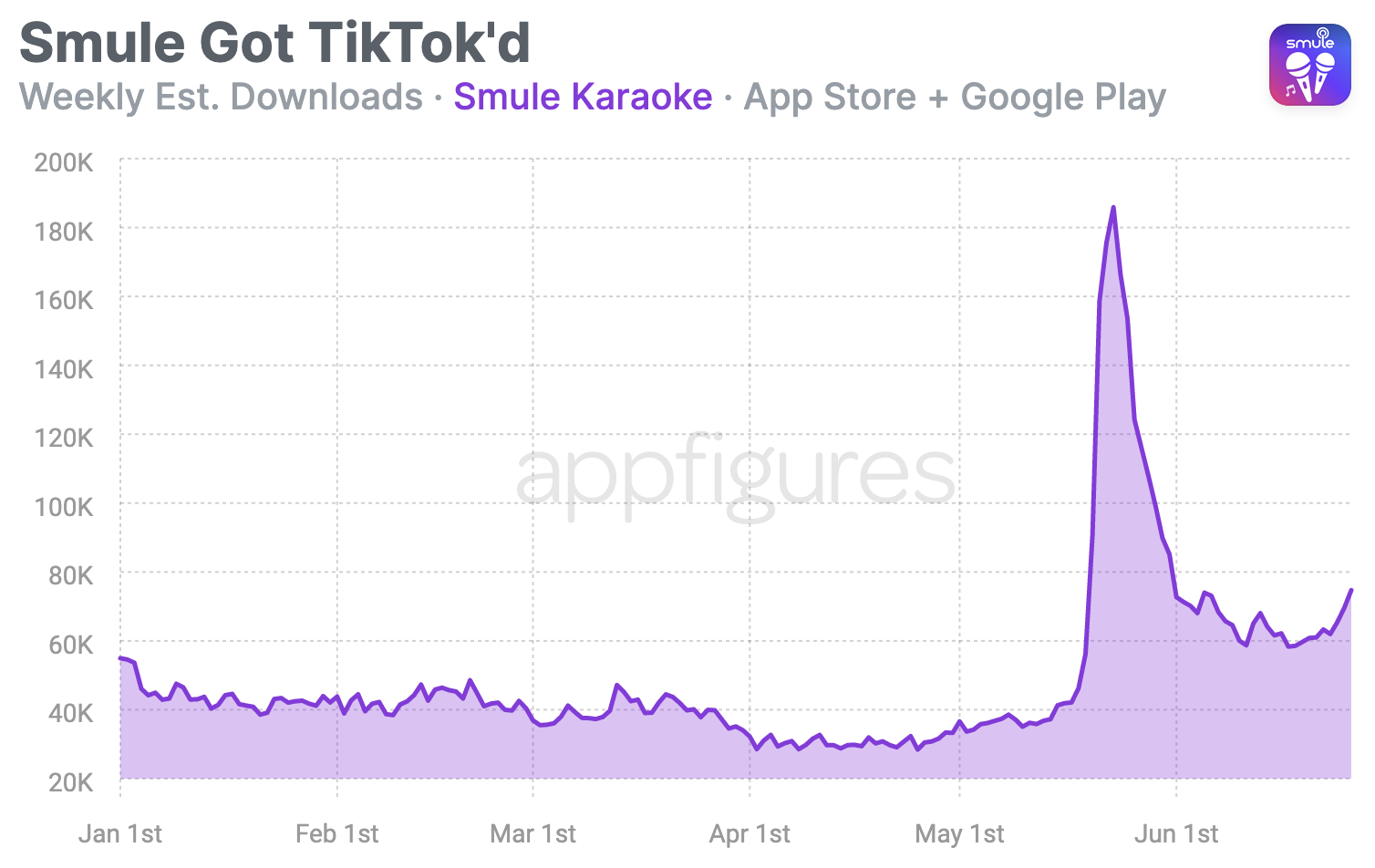 Although Smule's downloads have been fairly consistent (and high) globally, demand in the U.S. has been on a slump after the spike most games and social apps experienced last April.

In May, however, a few videos of strangers singing together (not so well) got big on TikTok, and demand spiked. According to our estimates, that resulted in a weekend rush that peaked at more than 185K downloads in the U.S. App Store. Demand continued to be high for about a week, adding more than 1.6M new singers.

For context, before the spike, Smule was averaging about 40K new downloads per day, according to our estimates.

I've been saying this a lot lately, but if you aren't looking at ways to use TikTok to promote your app, you really should be.

Smule Karaoke vs. the Competition

That's a nice-looking trend, fitting of the top app, but where there's demand, there's competition. Karaoke is a perfect example:

Smule may be the top dog, but also in a race. And with apps that aren't necessarily about building a brand, which is why their names all revolve around karaoke and nothing else.

Although none beat Smule's massive downloads and revenue, look at the ratings. Also, look at the audience demographics. Smule's a bit different than the rest and likely a result of its paid ads. Still interesting.

How is Smule Karaoke Found?

We've looked at trends and competitors. Now, let's see what's Smule got going for it that earn it such a nice number of downloads. 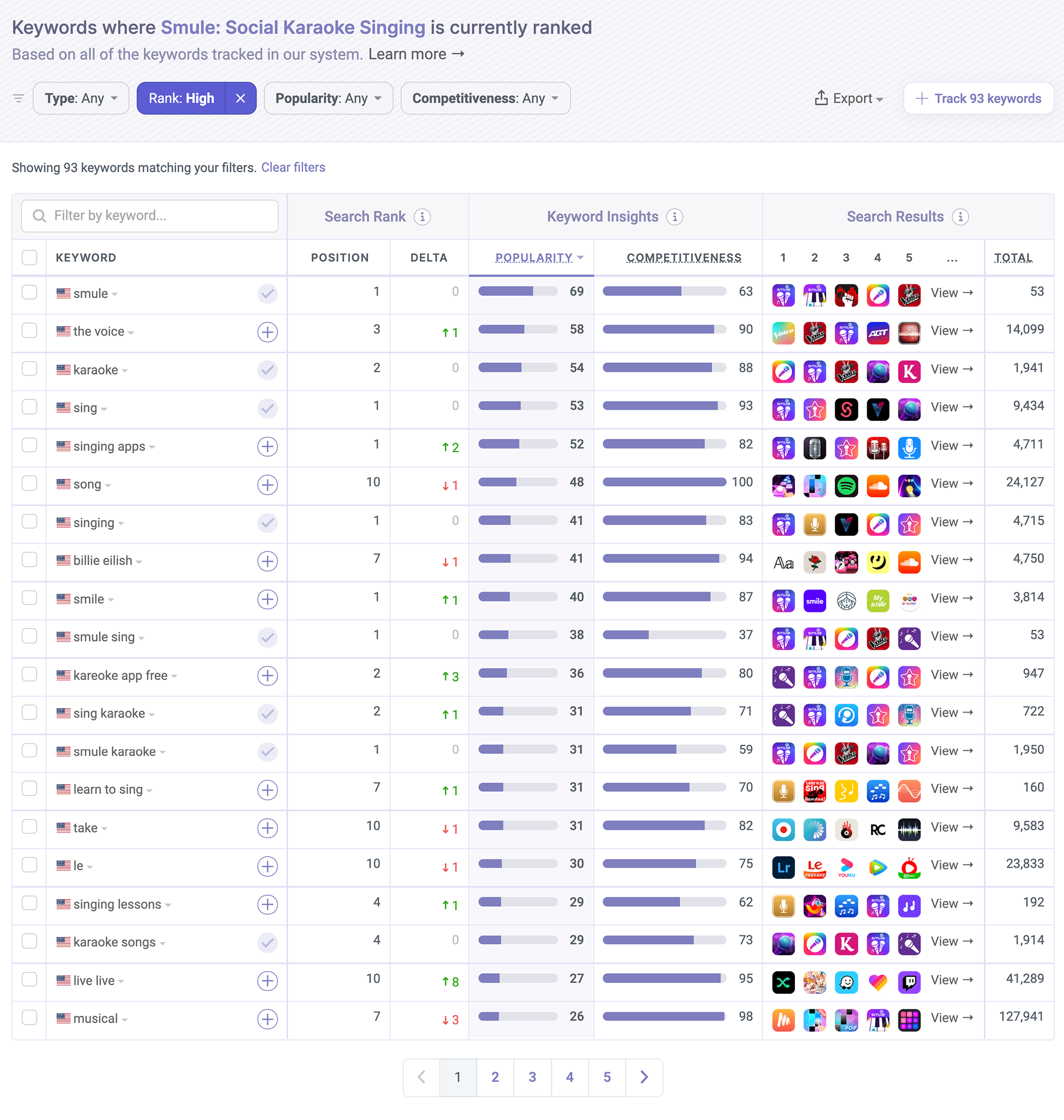 Smule's brand is strong. Very strong. We can easily tell that's the case when we look at the popularity of those keywords. But... That isn't enough to support healthy organic growth.

That's why it's best to "ride the wave" of paid ads, something Smule invests quite a bit into, to refine the app's ASO. I see no shortage of that here, which is why the app earns such a high score.

Let's dig in by looking at the keywords Smule Karaoke is targeting in its name and subtitle. Those two send the strongest signals to the App Store's algorithm.

The name and subtitle actually produce a little over 60 combinations, but most of them aren't at all popular. The list above includes those that have some searches all the way up to the very popular branded term. That means things like "smule sing," which don't sound particularly popular, have at least some searches.

That's what's wonderful (and disastrous) about ASO. What you think isn't necessarily true, which is why you have to base your choices on data. 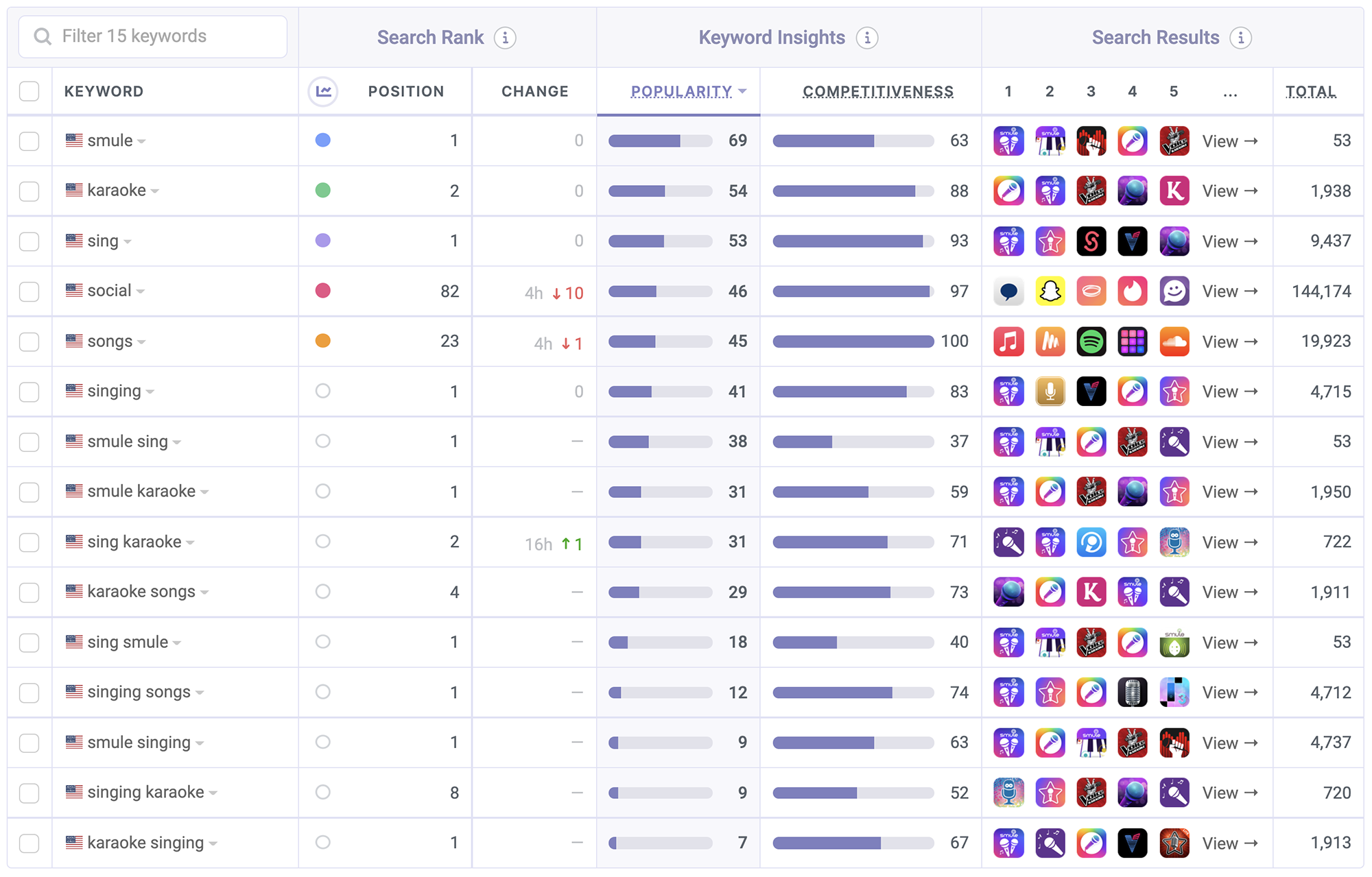 Look at all those first places!

It should come as no surprise that the most popular keyword in the app's arsenal is its own brand. Smule is not just a popular brand but also one that has been around for a veeeery long time.

The one interesting keyword is "karaoke", where Smule is second to an app with a fraction of the downloads. 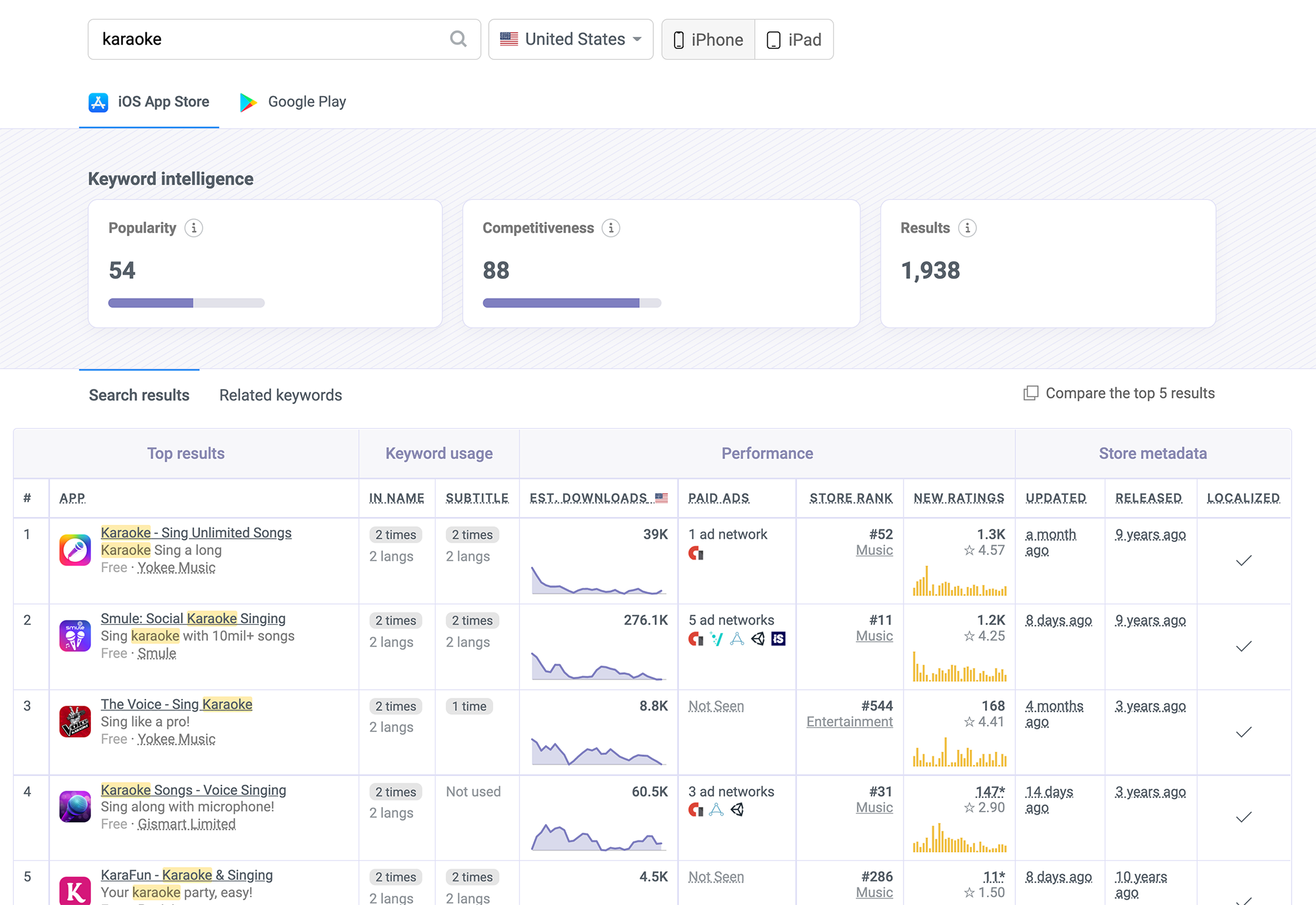 The question shouldn't be why isn't Smule #1, but rather why is Karaoke #1. Especially because it misspelled its subtitle. I noticed!

The answer comes in two parts:

Try it for yourself. It works.

Tip: ratings are a very important signal to Apple's algorithm. One important thing to note is that it's not only the absolute number but also the trend. You want both of those to beat the competition, but if you can't get both, the latter is a stronger signal.

About that duplication... The wasteful duplication you see both apps doing is just wasteful. You don't need this repetition to convince the algorithm your app is the more appropriate result.

Reverse engineering Smule's list was rather interesting. I found a lot of hints, but I'm pretty sure this isn't the complete list.

This normally happens when the list isn't optimized, or the keywords are too all over the place. Looking at how the name and subtitle are optimized, I can safely rule out the former, so it has to be the latter. I took a look at the Ad Gallery for Smule Karaoke, and there are hundreds of ads there across a bunch of networks, so I think it's safer to go with the latter and that it's all over the place for a reason.

Looking at what I was able to uncover, everything here makes perfect sense and follows the same best practices I talk about in other Teardowns and in my ASO guides. There are features, benefits, and use-cases.

Little note - I looked at the celebrity names Smule lists in the app's description. Most aren't popular. Some have no results at all (try searching the App Store for Luis Fonsi). Another reminder that trusting gut, when it comes to keyword popularity, has its flaws.

Smule Karaoke's got a video, and wait! Is that Ed Sheeran there for a split second? Yes, yes it is.

Smule's video, like everything else I've seen so far, is well thought out and well-executed. The video is fast-paced, which insinuates fun, shows celebrities to get people excited but mixes in regular folks to keep things friendly, and highlights what the app is really all about—Singing together.

I don't see myself singing karaoke into a phone, and yet it got me excited. Well done. On to the screenshots: 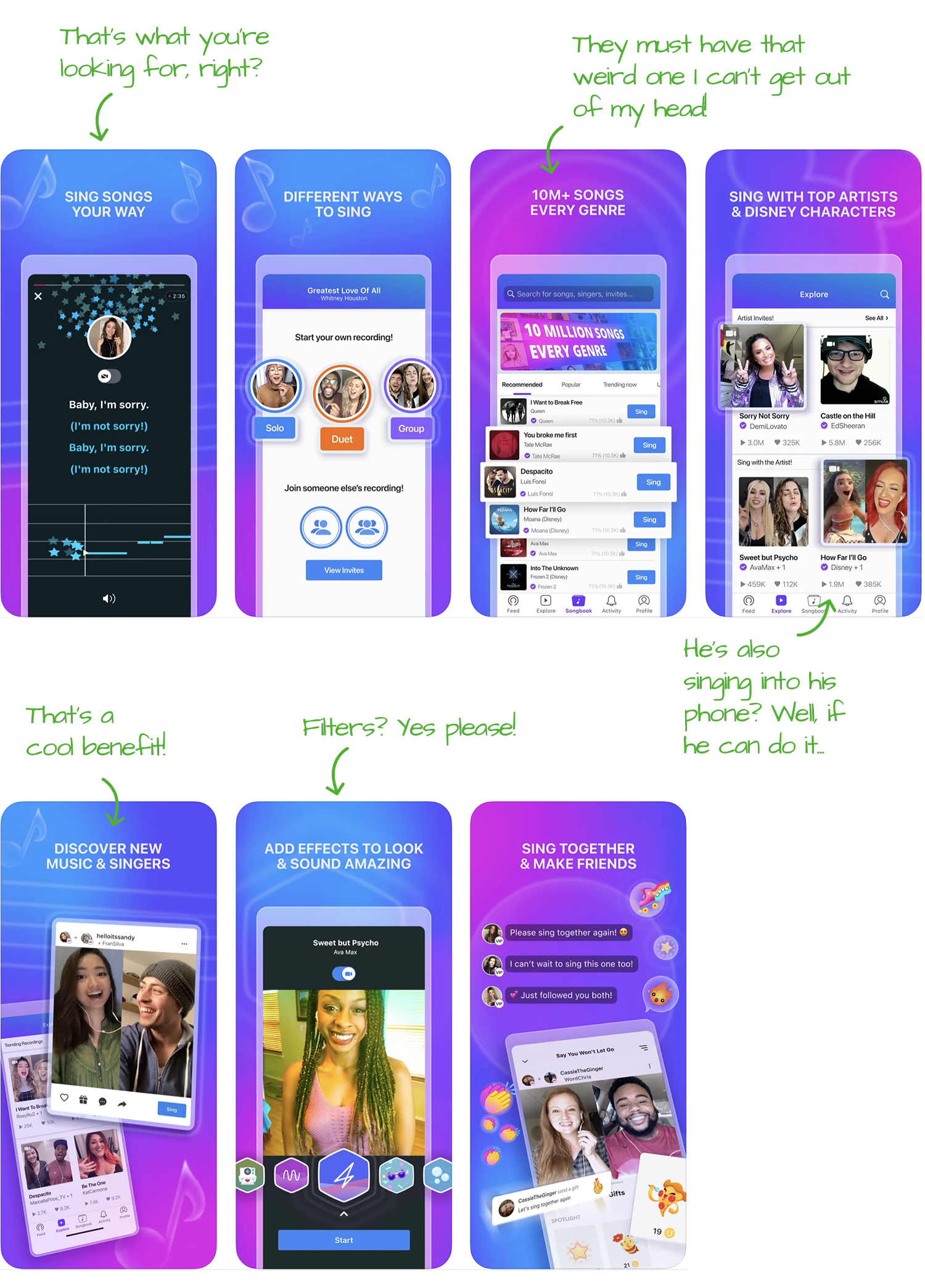 This is a beautiful set of screenshots and for several reasons. It checks all the boxes, from contrast to short captions, it shows off what most users are likely most interested in first, and it tells a very linear story that starts with what the user wants (lyrics on the screen) and ends with what's special about the app that is easier to understand _after (singing together).

I can already tell that come September (aka. when iOS 15 ships), the team at Smule will have A/B tests up and running to refine this set even more.

What Data is Smule Karaoke Collecting?

In this new(ish) section, we look at the privacy labels apps declare on the App Store. Smule Karaoke is definitely collecting, but considering it's a free app, it's not too bad.

At a glance, these look pretty standard. For an app that monetizes with ads, that is. None of this should be concerning, but if you dig deep enough, you'll see Smule uses email addresses for advertising and marketing purposes, which likely means for creating user profiles since they have a few apps.

ATT (App Tracking Transparency) certainly ate some of Smule's cake (of ad revenue), but that doesn't seem to be an issue for downloads so far.

Here are all the SDKs and APIs we see powering Smule Karaoke:

A whole lot of Facebook. Considering Smule's promise of social karaoke, that isn't surprising. The rest, attribution (because they spend on advertising), ads (because they make money by showing ads), and utilities, all fit into an app of this type.

The Verdict: A High Note

I gave Smule Karaoke an A+ for a reason. Keywords are optimized, screenshots are well-executed, and it seems the team is trying things. The repetition put the + in question, but overall, everything else is so well done that I left it there.

Whether you have a music app that competes with Smule's or one that's totally different, let Smule's execution inspire you to optimize your metadata and try new things.