We're kicking off season 4 of App Teardowns with the #1 video editor, by keyword rank, in the App Store. We've looked at a video editor (Picsart, in case you're curious) before, but this one manages to outshine it + show us a tiny quirk in Apple's search algorithm.

Video editors have been gaining momentum for a few years now, and Splice sits at the top of the pyramid.

Overall, Splice earns an A+ for doing things right!

Splice by the Numbers

Here's how Splice is performing in the U.S. App Store, based on our Competitor Intelligence:

Video Editors to the Moon 🚀

Over the last few years, video managed to make its way into social media and cause demand for apps that help make videos nicer. We saw this rise with photo editors in the early 2010s, and now it's time for video.

Splice, which is the #1 result for "video editor" in the App Store, enjoyed the kind of revenue growth founders and investors fantasize over. 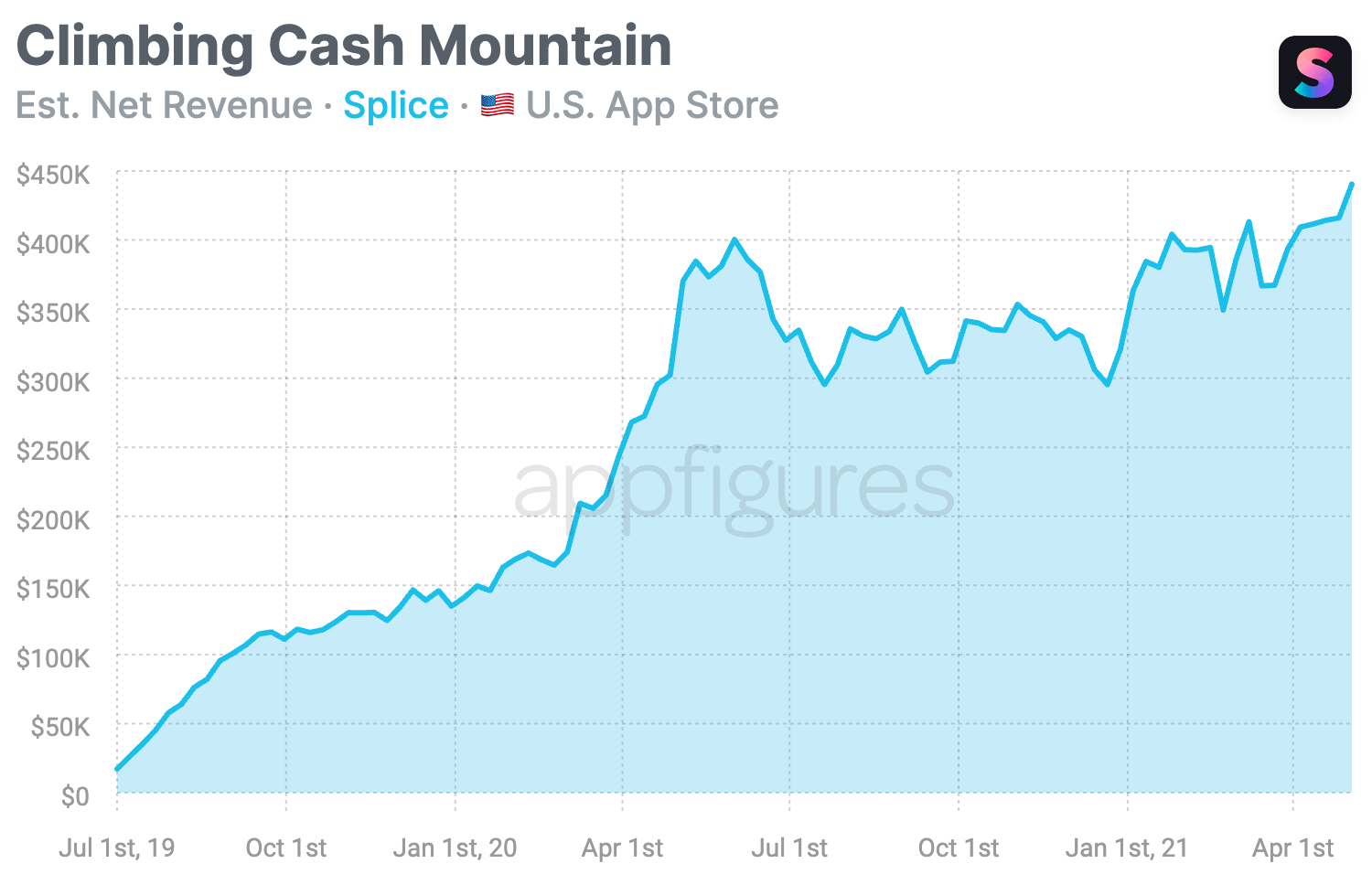 TikTok's popularity and the advancement in phone cameras have made it so easy to become a video creator. But there's a catch—more creators + more average content, and hence the need to work harder to rise above it.

That's where Splice and its competitors come in, and looking at their estimated revenue over the last few years, it's working very well. Revenue grew by 25x in the last two years, with a spike at the height of COVID that Splice has now managed to beat.

With its very efficient downloads to revenue conversion, serious bottom line, and dominant position, Splice is in a perfect place to leverage ASO to increase the bottom line.

Splice vs. the Competition

Demand + opportunity = competition. It's pretty simple, and when it comes to video editors, you can see it by the sheer number of apps that promise the same set of features and, in some cases, use the same set of keywords (I'm looking at you, Magisto!).

Splice leads the pack not just in keyword ranks but also in downloads and revenue, according to our estimates. With freemium apps, one of the most important KPIs to keep an eye on is how much money comes out of each download. The more efficient you are at onboarding and retaining users, the more a download is worth, and the more you can invest into user acquisition.

Did I mention Splice is battling Apple's own iMovie?

While you may think Apple would automatically win, being a free app, it's got less than half of Splice's downloads. Why's that? The generation that's flocking to download video editors is looking for convenience over brand, and iMovie isn't very convenient—something to keep in mind.

How is Splice Found?

Video editing is the perfect category for organic discovery. There's a lot of demand and not directly for brands but rather for features. This means that with the right ASO strategy, any app can take off without the need to build demand for a name.

Splice is guilty of doing that, and I mean that in a positive way.

Let's begin our analysis with a look at the keywords where Splice appears on the App Store now: 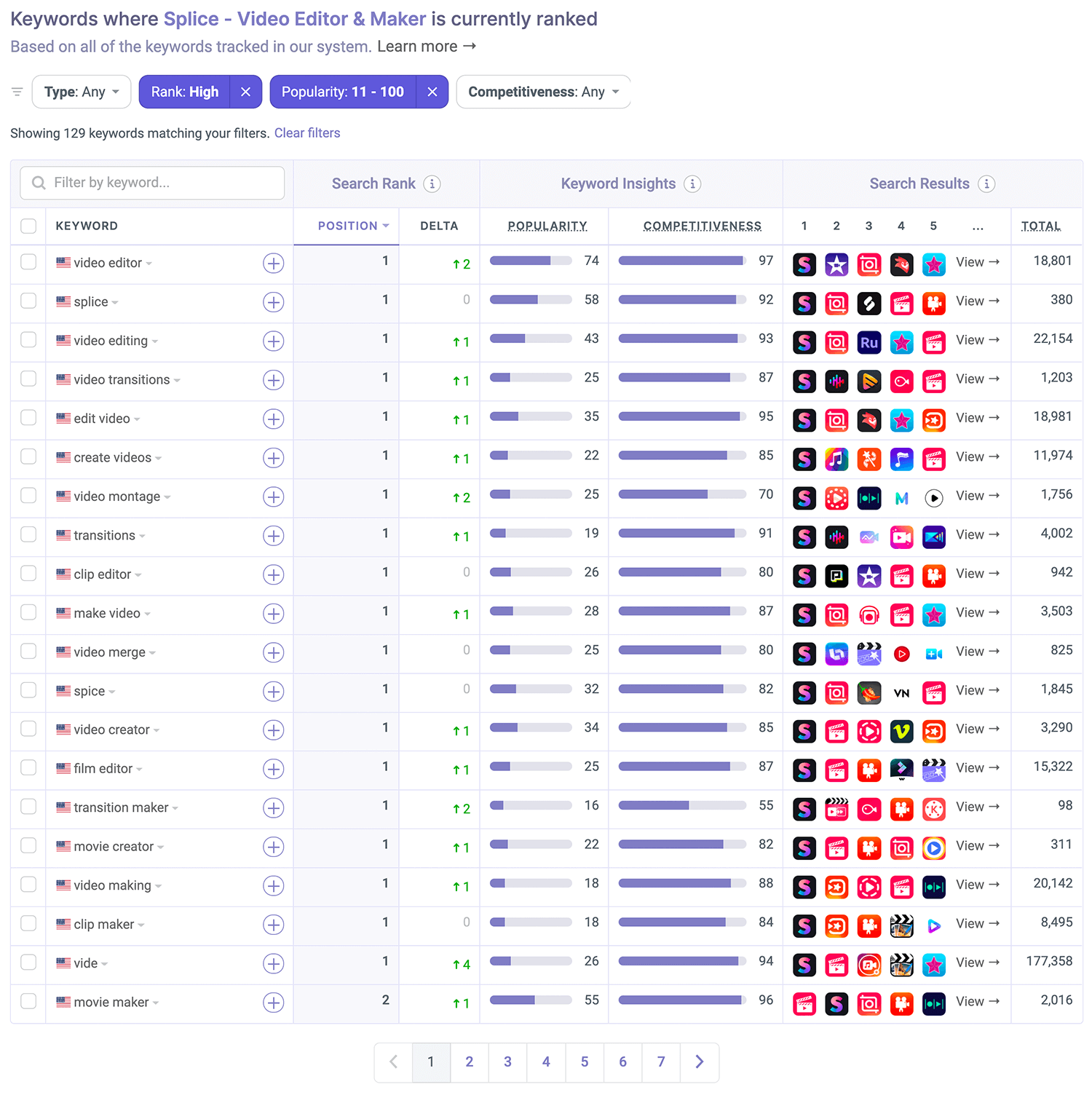 We've got 129 keywords after filtering by popularity and for high rank. That's not something we see often. At all. Without filters, the list is nearly 1,000 keywords long.

Right off the bat, we can also see these keywords are also pretty popular and are all very relevant. Many feel like long-tail keywords, meaning ones that aren't super strong on their own, but when you rank well in a bunch, you get a lot of traffic.

In Splice's case, even the long-tail keywords are pretty popular.

Do you know why Splice has such a wide footprint in the App Store? Constant updates. In the last 30 days, Splice released two updates. That was a slow month. Looking at Splice's update history, most months have 3-5 updates.

In a recent AF Chat, Ian Irving from the BBC shared how often his team updates keywords, which is every 4-6 weeks.

Let's dig in by looking at the keywords Splice is targeting in its name and subtitle. Those two send the strongest signals to the App Store's algorithm.

Strictly based on these, here are some of the popular keywords the algorithm sees because there are a lot of keywords packed in there:

The name and subtitle actually produce many more popular keywords, so I limited the list to the most popular and most relevant ones. I also omitted branded keywords.

Here's how they rank:

If you've been reading past App Teardowns, you'll know that so many high popularity keywords + top positions are pretty rare to see.

There's the issue of "video maker" having a low rank, which seems like an anomaly. It is. More on that in a second.

The name and subtitle follow ASO best practices, and clearly, the team responsible for them followed the data. I say that because while both "editor" and "editing" are very popular modifiers, the former is more popular, which is why it ended up in the name and the latter in the subtitle. Same for "maker" and "making".

In every set of keywords, there are always the ones that are more popular and when they sound alike. Those should always make their way into the app's name.

Now, back to why Splice isn't ranking so well for "video maker".

Personal Observation: Having looked at keyword ranks for a lot of apps, I noticed a "quirk" in Apple's algorithm where when using some symbols, in this case, the & and -, it "pushes" the name to be longer than it really is, and the algorithm then ignores characters that have been pushed out.

In the case of Splice's name, having two symbols and 29 characters really = 31 characters—one too many. So the algorithm doesn't see the full name but rather Splice - Video Editor & Make.

Having seen everything else be so meticulously perfect, I expected a keyword list that follows best practices. Splice delivered!

This list is pretty straightforward. A whole bunch of things you can do with a video editor, and in some cases, different words that describe the same action, such as "merge" and "combine."

The key to a strategy like this is that all of the keywords have to combine with the ones in the name and subtitle very well. These do, which is why Splice has such a wide footprint in the App Store (aka. it appears in many search results).

👉 How to Optimize Your Keywords List in App Store Connect

It's been a while since I got to analyze a video on the App Store, but to say it isn't a perfect fit here would be difficult. If you have a video editor, a video showing it in action is a must.

Splice's App Preview tells a story. It goes beyond animating screenshots, giving the user what they want first (a perfect video) and then walking them through how (features). You can tell this video was well planned and is well produced.

It's hard to replicate such effort, but if you do have the resources there's really no reason not to create one for your app. 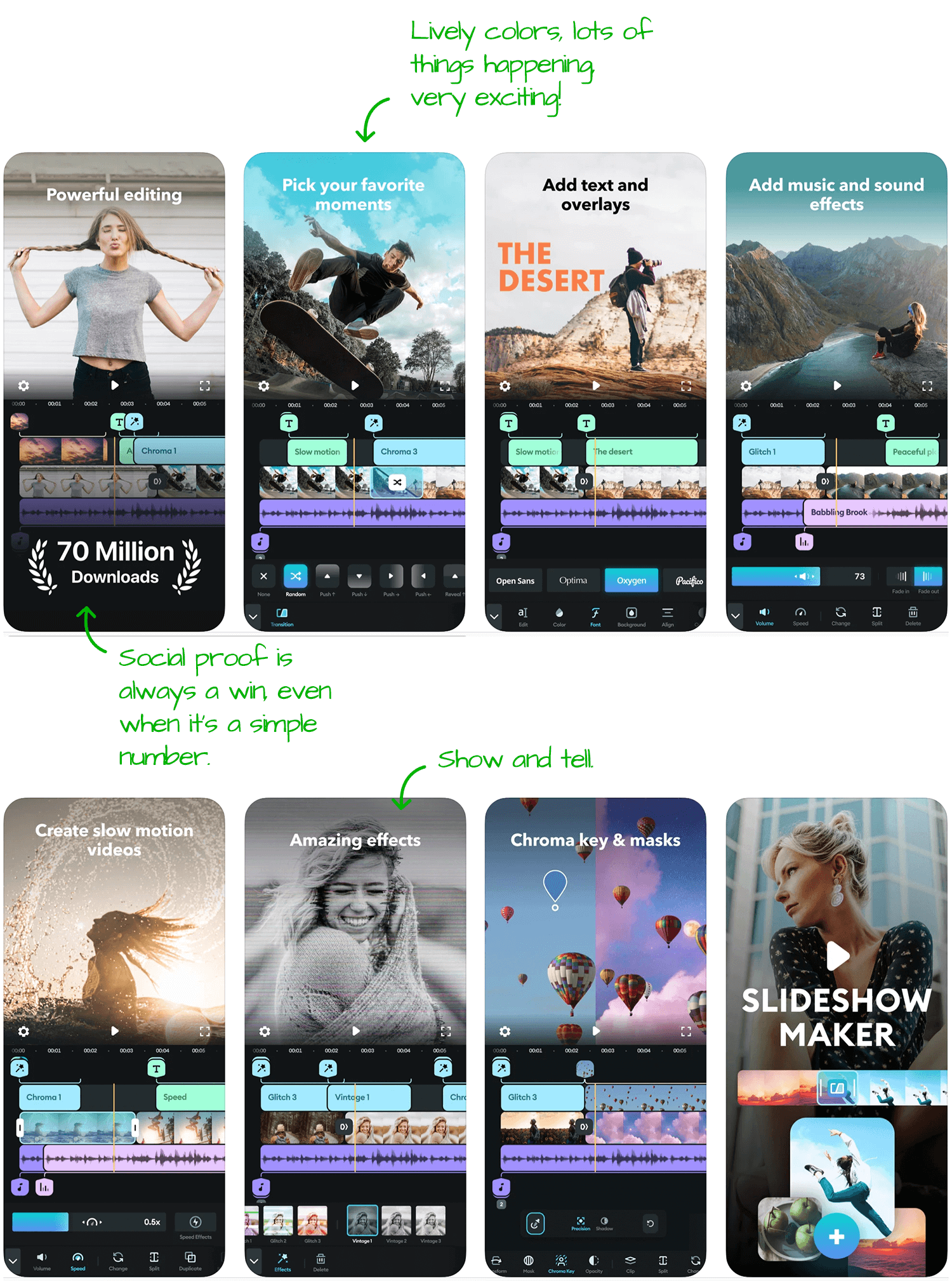 Instead of reiterating the basics (actionable captions, contrast, color, use of people), I'd rather talk about something a bit more advanced, and that's selecting what to say in your screenshots.

I always say to tell a story with your screenshots, but what does that really mean? Many developers think that means listing all the things their app can do. That's not a bad starting point, but...

Let's talk about what users want and not what developers give.

As a user, there's always something you want to do, and most times that thing isn't, in your head, related to a specific feature.

We don't want a way to combine video clips, we need the perfect video for TikTok. We don't want video filters. We need our video to stand out from the crowd.

Highlighting features is great, but telling the user what they want to hear is better.

What Data is Splice Collecting?

Keywords ✅, Video ✅, Screenshots ✅. Splice's ASO is nothing short of perfect. Switching gears completely, let's see if there's anything technical that can hurt it by looking at what data Splice is collecting and how.

This is pretty standard. Splice is tracking app usage to improve the app most likely, while also keeping track of other relevant items such as identifiers so you can have an account, search history and user content, so they can customize your experience, and purchases because they use in-app purchases.

So far, so good, but as I've said before, knowing what's being collected is not as good as knowing where that data goes. Let's dip into SDK Intelligence to see that and make sure everything's above board.

Here are all the SDKs and APIs we see powering Splice:

Nothing out of the ordinary here either, which means the assumptions I made about the privacy labels is most likely correct. Most of the 3rd party SDKs are used for app management and marketing, which is reasonable considering the revenue figures we looked at before. Getting those requires investing in ads, making things like Adjust and Leanplum necessary.

One thing to note is the use of App Tracking Transparency, which means Splice wants to uniquely identify its users. I don't see any reason other than for attribution and analytics, so I think it's safe to say there's no monkey business here. But then again, I see Firebase installed, which means there's some.

We'll see how the dust settles on ATT in a few months and whether Apple managed to deter tracking across the entire industry or not.

The Verdict: Hate to Say "I Told You So"

ASO is crucial to the success of some most apps and soon enough games, which is why if you haven't started on yours you're already a step (or six) behind. Splice shows us what ASO looks like when it's done right, and that's a pretty sight all around.

Splice didn't get to dominate so many keywords over night and the journey wasn't the set-it-and-forget-it kind. Good ASO requires experimentation and iterations.

The sooner you start the closer you'll be to real organic growth.