Regardless of how you monetize your game, getting more downloads is always a good way to increase revenue, and growing organically (without having to pay per download) is a great way to do that.

Organic growth, in the App Store and on Google Play, comes from being found in search results. There's a pretty good science to that, and it's called App Store Optimization.

Let's start with the very basics, what is ASO, and why is it important? Simply put, App Store Optimization is a set of techniques to help Apple's and Google's search algorithms associate your game with specific keywords that are popular in the store and are relevant to your game.

The process is simple:

There's a bit more color to each step, which we'll get into below.

Why ASO for Games isn't the Same as ASO for Apps

If you've done ASO for apps before, or have read about ASO, you'll know that keywords for apps revolve around the app's features and benefits. That's usually what people search for in the store, a solution to a problem.

Games aren't really a problem you can solve with a feature, so the intent is different, which means keyword optimization for games requires an entirely different approach.

When it comes to finding games, most people that aren't searching by name, search by genre or by mood. Those keywords are more generic and competitive (we'll get into what that means in a bit), so finding the best ones will take some cleverness and good tools.

How to Find the Best Keywords for Your Game

Best can mean a lot of things, but when it comes to keywords, it means something very specific. A "good" keyword for ASO:

You may think you know which keywords are popular but guessing is a losing game. Although you might be right, if you are wrong, you'll just waste time. Time your game could be enjoying better search ranks and more downloads. Instead of guessing, it's better to use data.

Here are three ways to find the best keywords for your game:

1. Check Out Your Competitors

A great way to get started with keyword research quickly is by looking at what works for similar games. You can do that easily with the Competitor Keywords report: 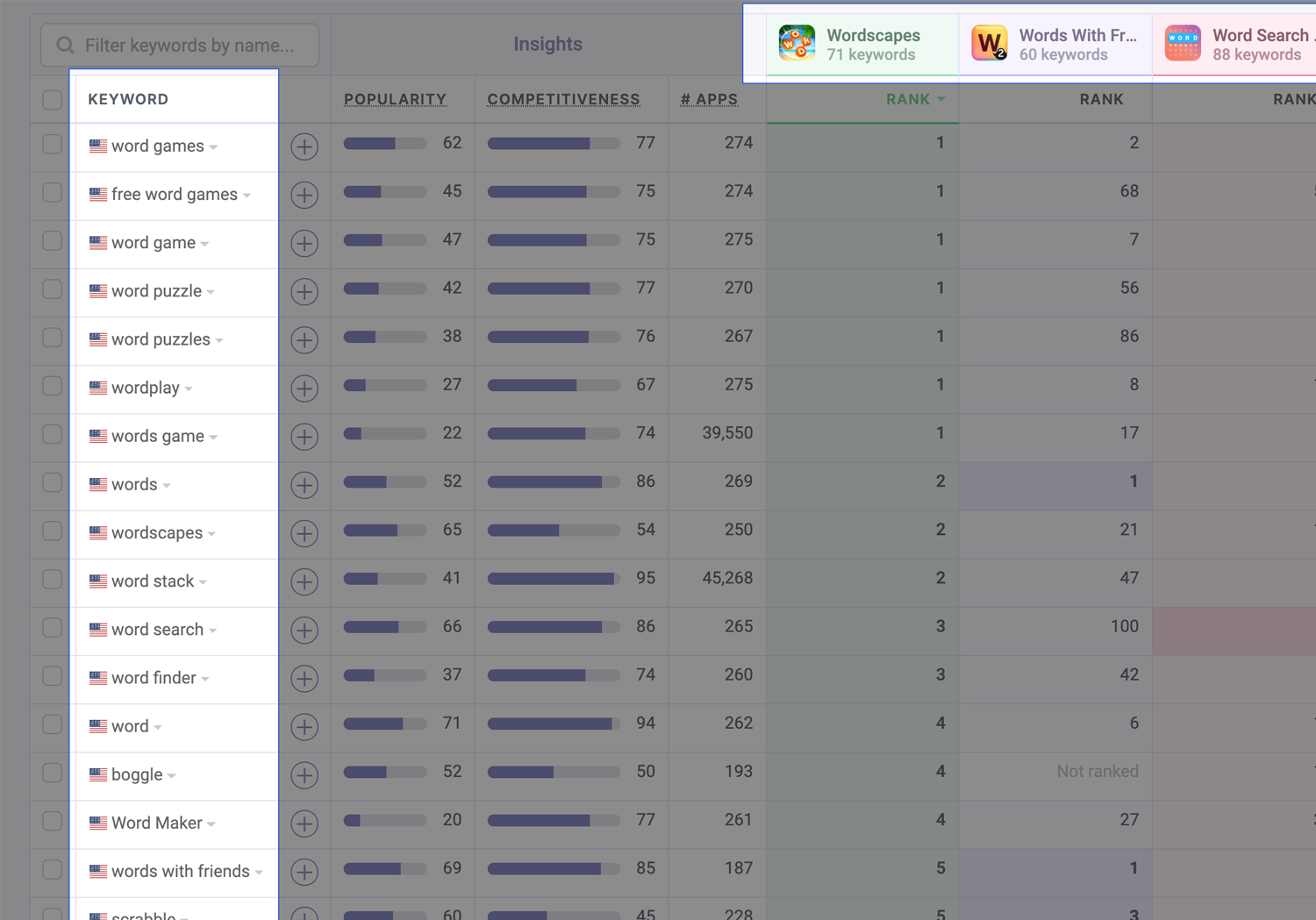 The Competitor Keywords report shows you keywords all of the games you select rank in. This lets you easily find common patterns, and as a bonus, sizes them up, so you know who's the game to beat for the best keywords.

When you find keywords that are interesting, evaluate them quickly by their Popularity and Competitiveness scores, and then track them. Don't spend too much time obsessing over scores at this stage. Double-digit popularity score is enough at this stage. We'll evaluate which keywords are truly best once we have a solid list. 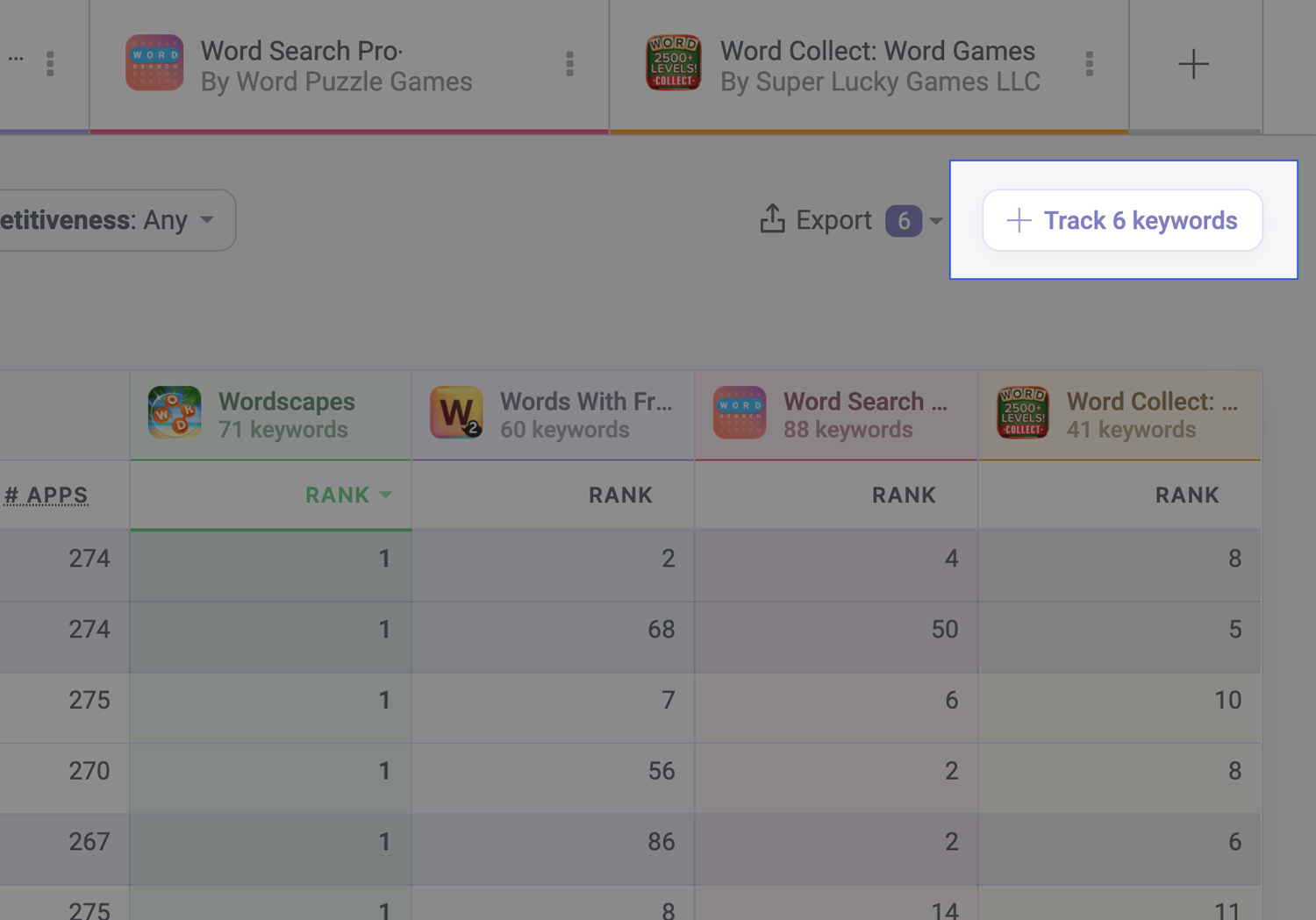 Using filters, you can get rid of unpopular keywords and speed up the research process. 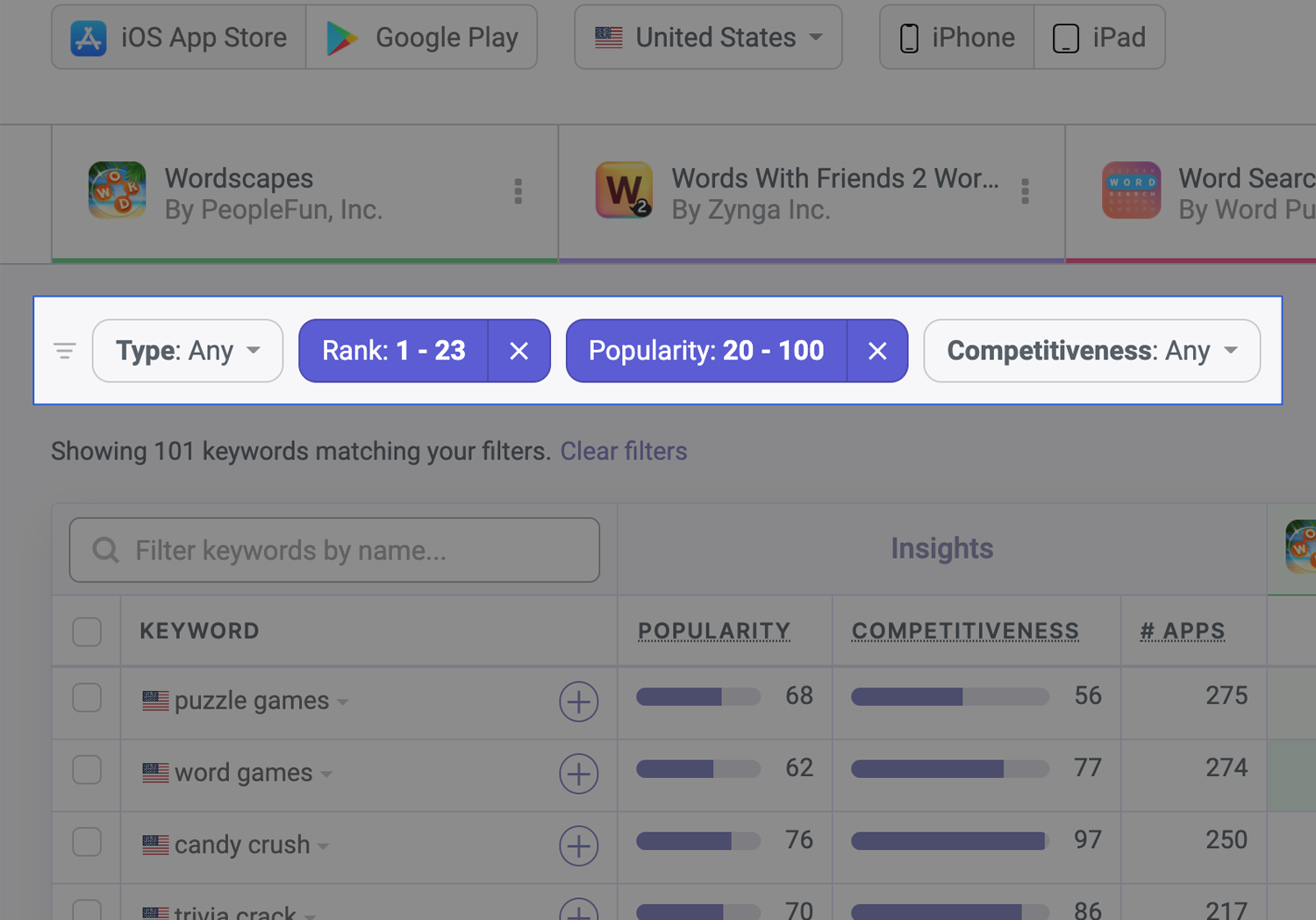 #Protip: If you're not sure which games to compare, search the store for a few general keywords your game fits into and add the games that rank in the top 5 results. 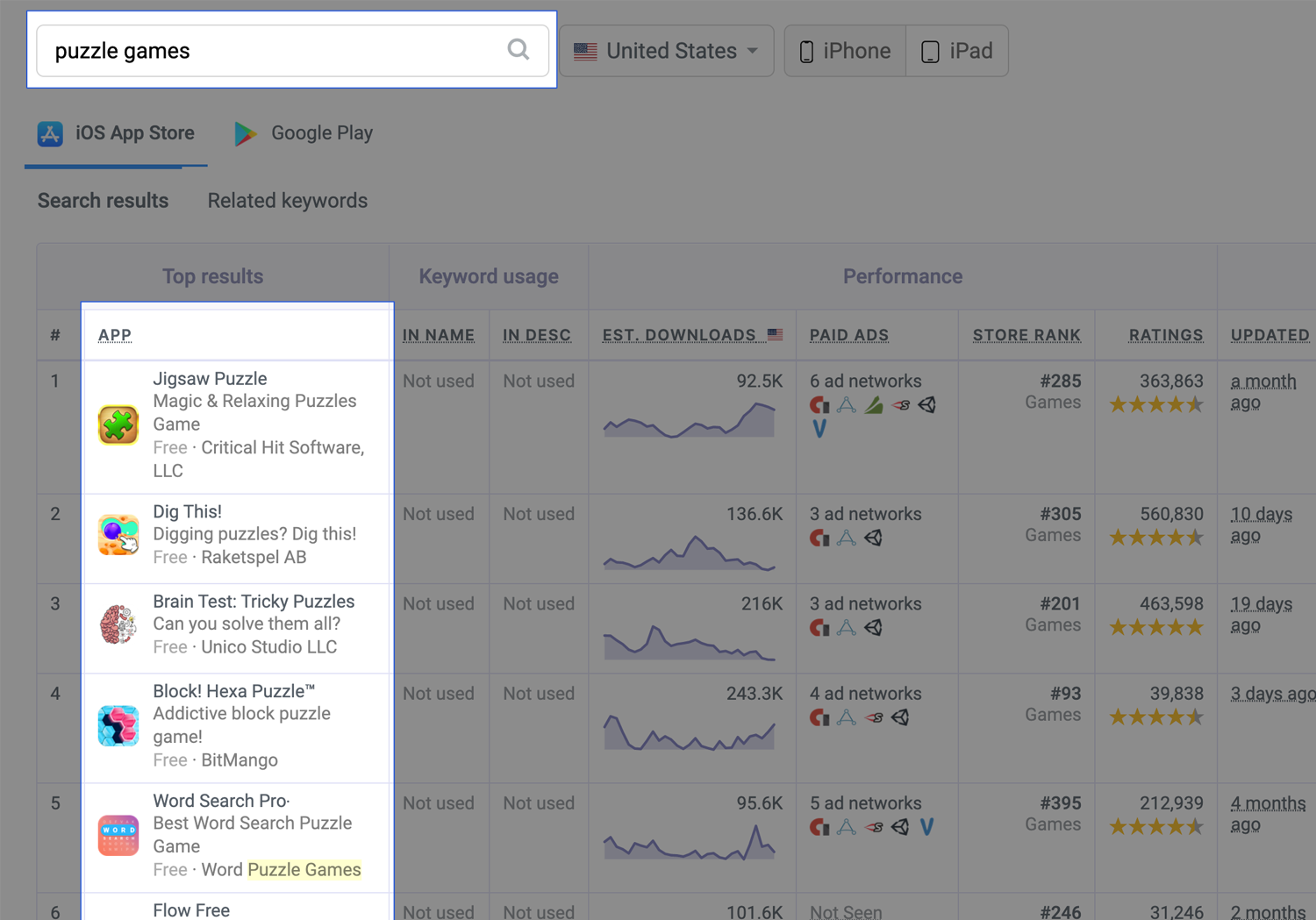 Once you've identified a few good keywords, a good way to expand the list is to find related keywords. You can do that in the Keyword Inspector report. We look at a lot of keywords all the time and use machine learning to group together keywords that are related even where games aren't competing. 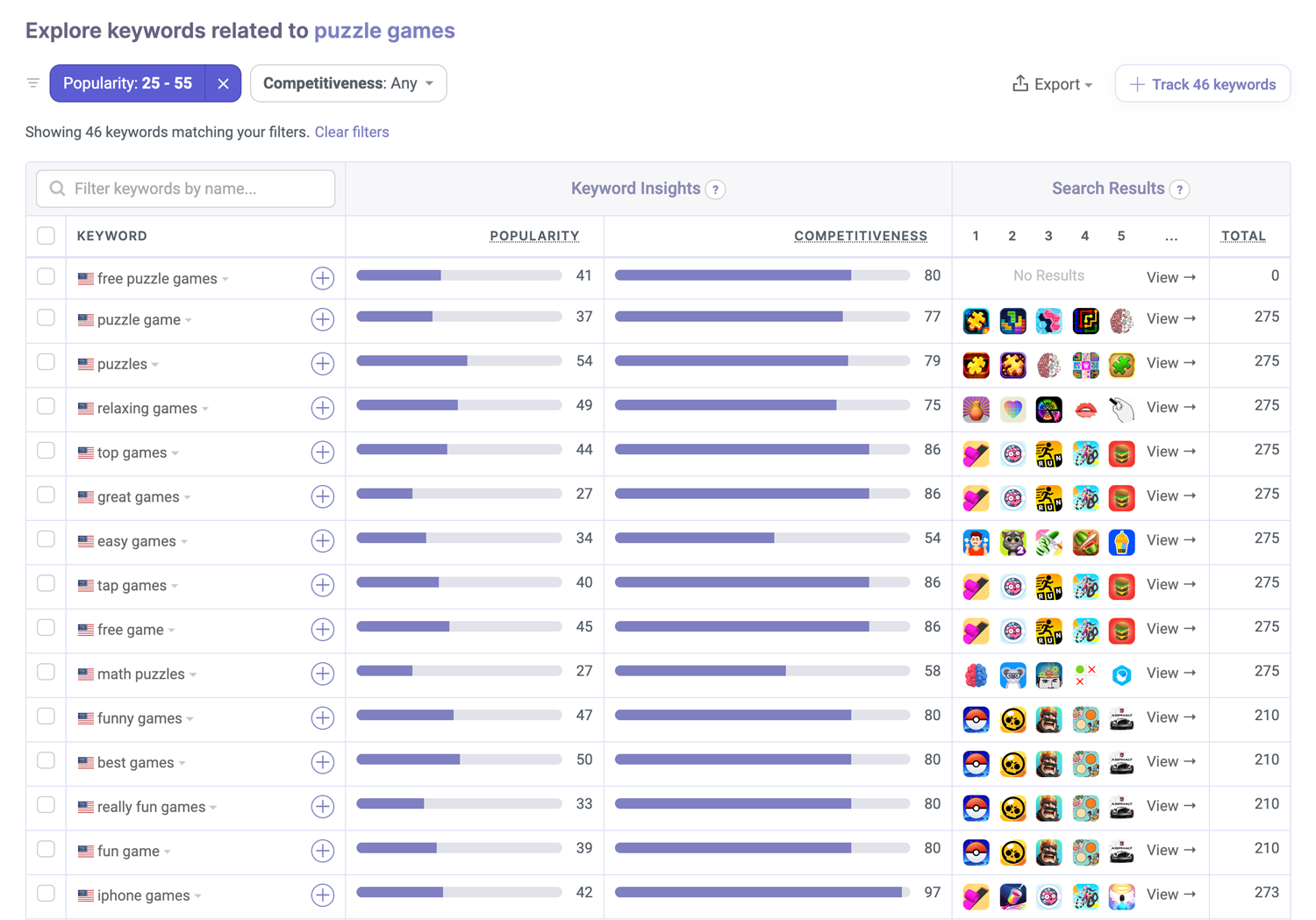 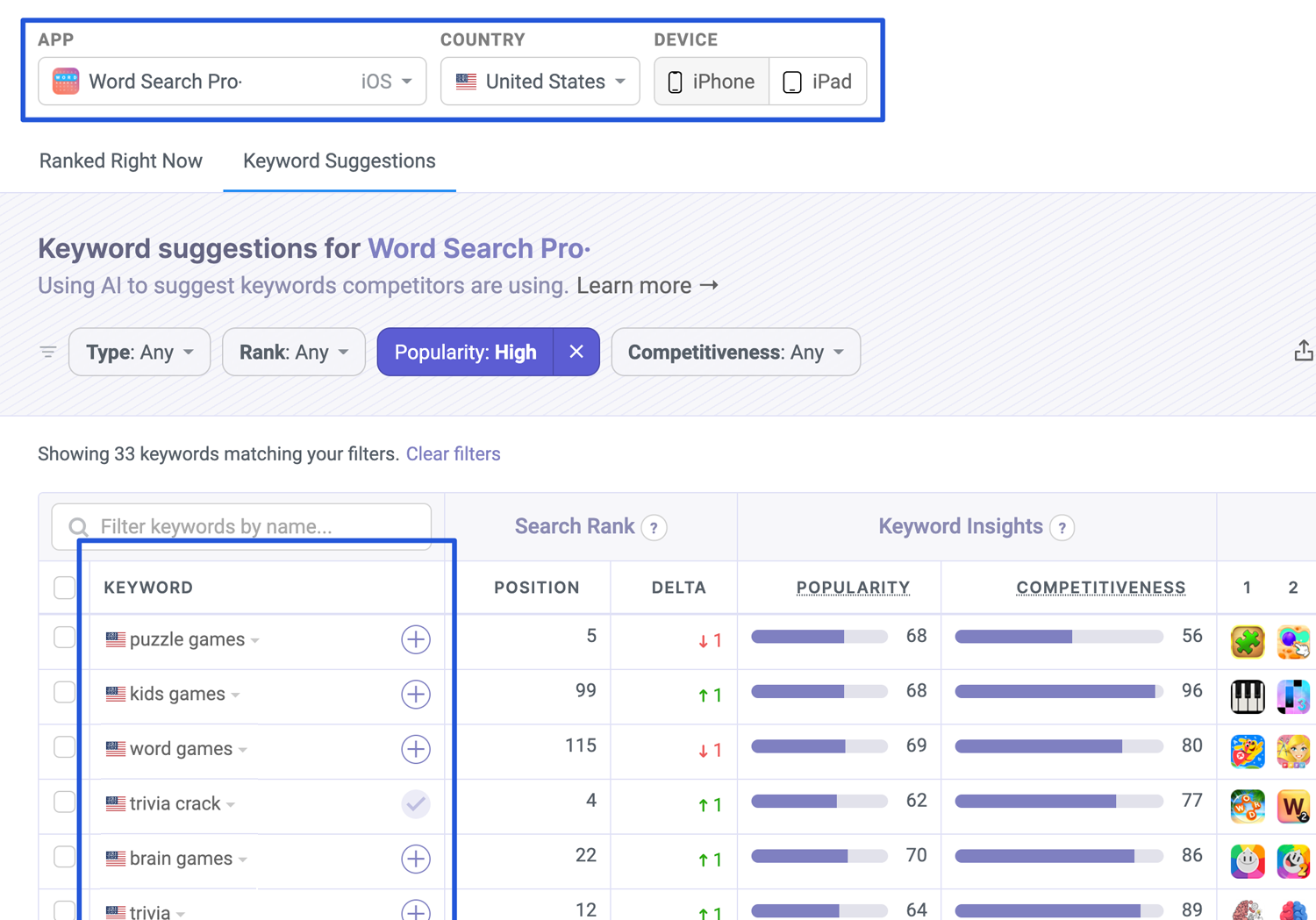 How to Verify a Keyword is Attainable

Now that you've gathered good candidates, it's time to trim keywords that are only "good" but not "best." We'll do that in two steps: the first, by looking at keyword scores, and the second, by matching performance. 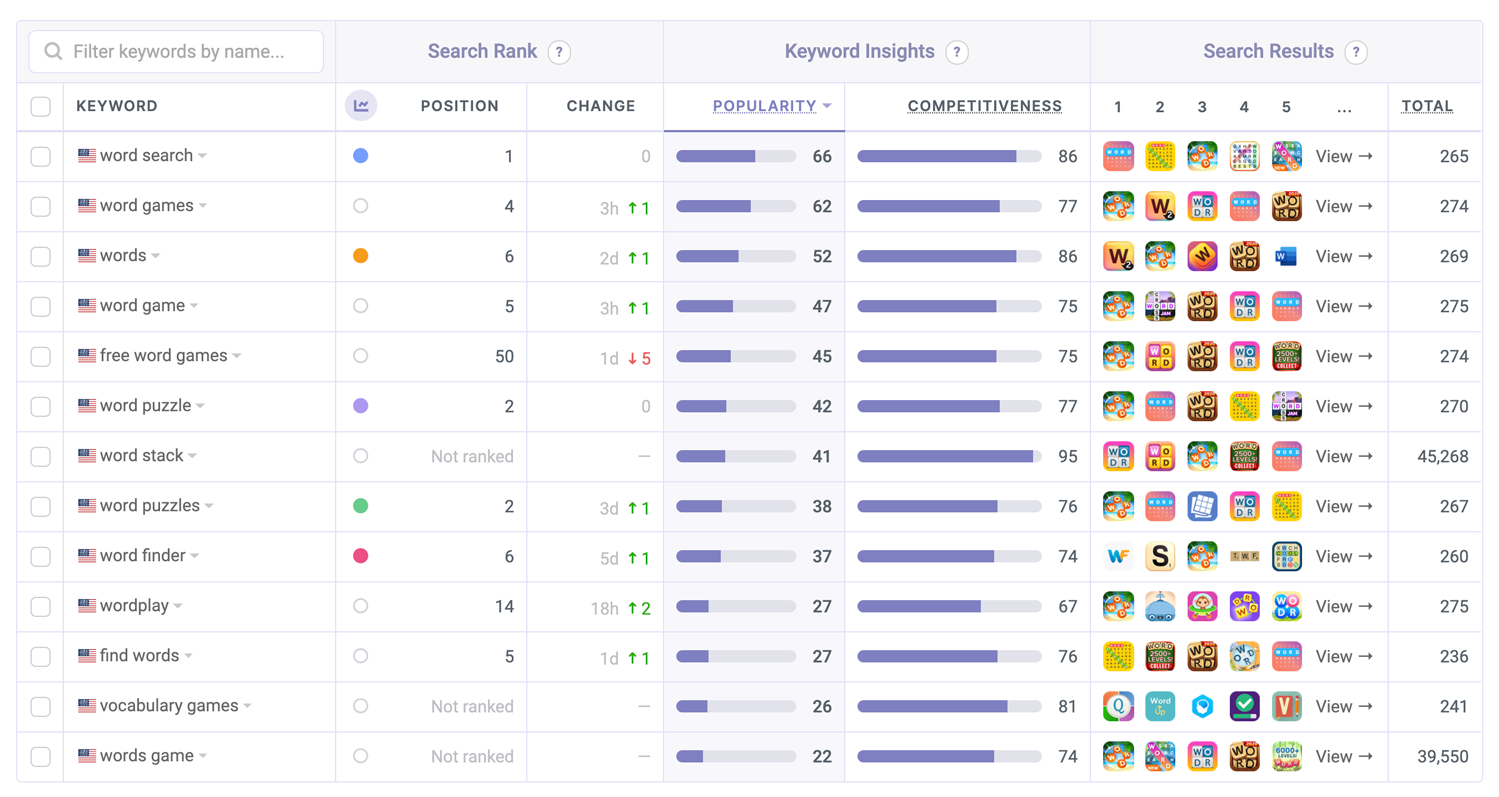 Now that the list is more focused on keywords with potential, it's time to make sure your game can actually rank well in those keywords. Optimizing for a keyword doesn't mean the algorithm will rank you at the top of the list, which is what you really want.

Apple's and Google's search algorithms look at performance when deciding which apps will be on top. By performance we mean downloads, ratings, rank in category, and in some cases when the game was updated last.

You can quickly see all of those attributes for the top results in any keyword with Keyword Inspector: 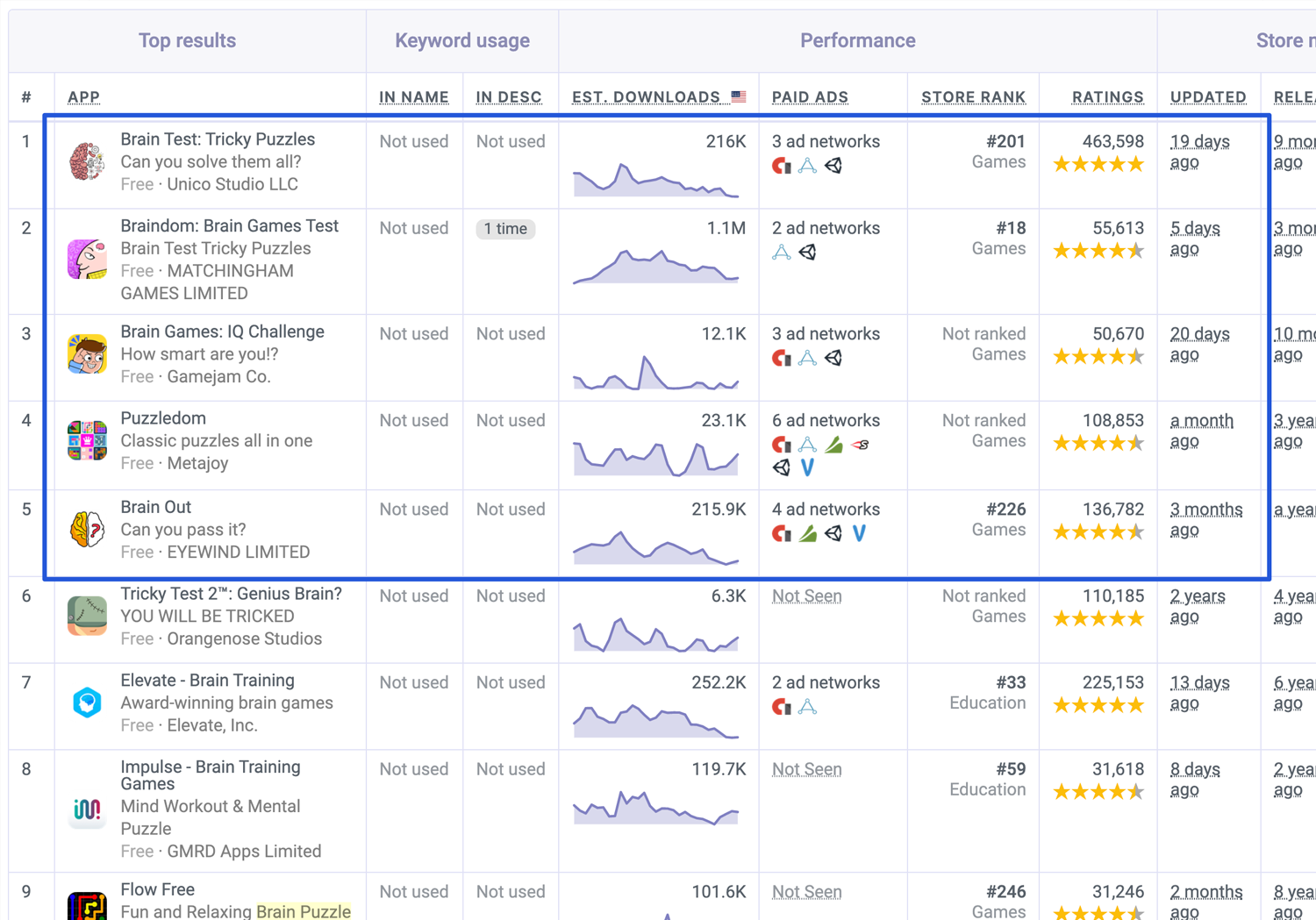 Estimating the performance needed to rank well in a keyword is somewhat of an art, mainly because the algorithms look at lots of parameters and also change often. But there's a general pattern that usually repeats itself:

Now... if your game fits, you've got yourself a good keyword to optimize for. If it doesn't, that's perfectly okay! Optimizing for it won't really net you any real results, so it's better to skip it for now and come back to it when your performance fits.

How to Apply Keywords to Increase Ranks on the App Store

Apple's algorithm looks at three places when indexing (associating keywords with the game) and ranking your game:

The app's name is the first and most important place for keywords. It's given the most weight by the algorithm, but it's limited to 30 characters, so you'll have to be careful.

👉Optimizing Your App’s Name to Get More Downloads

The subtitle is also limited to 30 characters, but the good thing about how it's related is that it's combined with the name when being analyzed by the algorithm. This means you can include one keyword in the name and another in the subtitle, and the algorithm will also consider their combination.

The keyword list exists in App Store Connect and isn't visible in the App Store. It's the lowest in terms of priority but is very important for keyword optimization. It offers a larger character count, which, when used correctly, can be used to target many keywords.

👉How to Optimize Your Keywords List in App Store Connect

How to Apply Keywords to Increase Ranks on Google Play

Google has a slightly different set of elements that can be optimized:

The app's name is the first and most important place for keywords. It's given the most weight by the algorithm, but it's limited to 50 characters, so you'll have to be careful.

Unlike Apple, Google doesn't give you a direct way to list keywords you'd like your game associated with. Instead, Google reads the game's long description and pulls keywords out of it. They're pretty good at that.

Google's search algorithm looks for keywords to associate your game in your reviews. That's right! You don't really have control over the words that go into your reviews, so it's important to keep it in mind. But... there actually is a way to have some control over that.

No, I don't mean by buying reviews. That's a big no-no and can get you kicked out of Google Play. You don't want that.

#Protip: There's a different way that isn't "black hat." You can get specific keywords included in your reviews by giving them to your users to use when they leave reviews. One way to do that is by using keywords in the names of your levels and in-app purchases. This way, when users refer to them in reviews, they'll help your keyword ranks.

The Key to Success Is Iterations

The last step is to submit your updates to the store and wait for the algorithm to start picking up the game. Using the Keyword Performance report, you'll be able to see if the changes had any impact on ranks. Results may show up immediately, but in most cases, you'll need about 3-4 weeks before you see any stable improvements.

While you wait, it's important to made sure the changes don't have a negative impact on ranks. If that happens, hit the undo button quickly.

You're not done. When you have results, you can evaluate what worked and what didn't.

The more you iterate over your keywords, the closer you'll get to having the ideal set. Until your performance improves, and then you can start again.

Optimizing your game is a surefire way to increase its visibility. You don't have to spend weeks researching, an hour or two once a month is probably enough. You probably have an hour or two for such an important task, right?

FYI - Appfigures has all the ASO tools you need to monitor and optimize our games, and also keep an eye on your competitors. Get started →