Move Aside Parler, GETTR's Here to Take Over. Twitter, Too?

A new social network launched last week that looks a lot like Twitter and sounds a lot like Parler. The app comes from a company co-owned by Jason Miller, an ex-Trump spokesperson. However, while some news outlets have suggested it's a "Trump app," it seems the two aren't related, and Trump doesn't have an account on it.

GETTR was officially launched last Thursday and managed to climb the top chart in the U.S. pretty quickly on Friday, reaching the 11th spot overall in the U.S. App Store. (Check current rank).

How does that translate to users? Let's have a look at our download estimates: 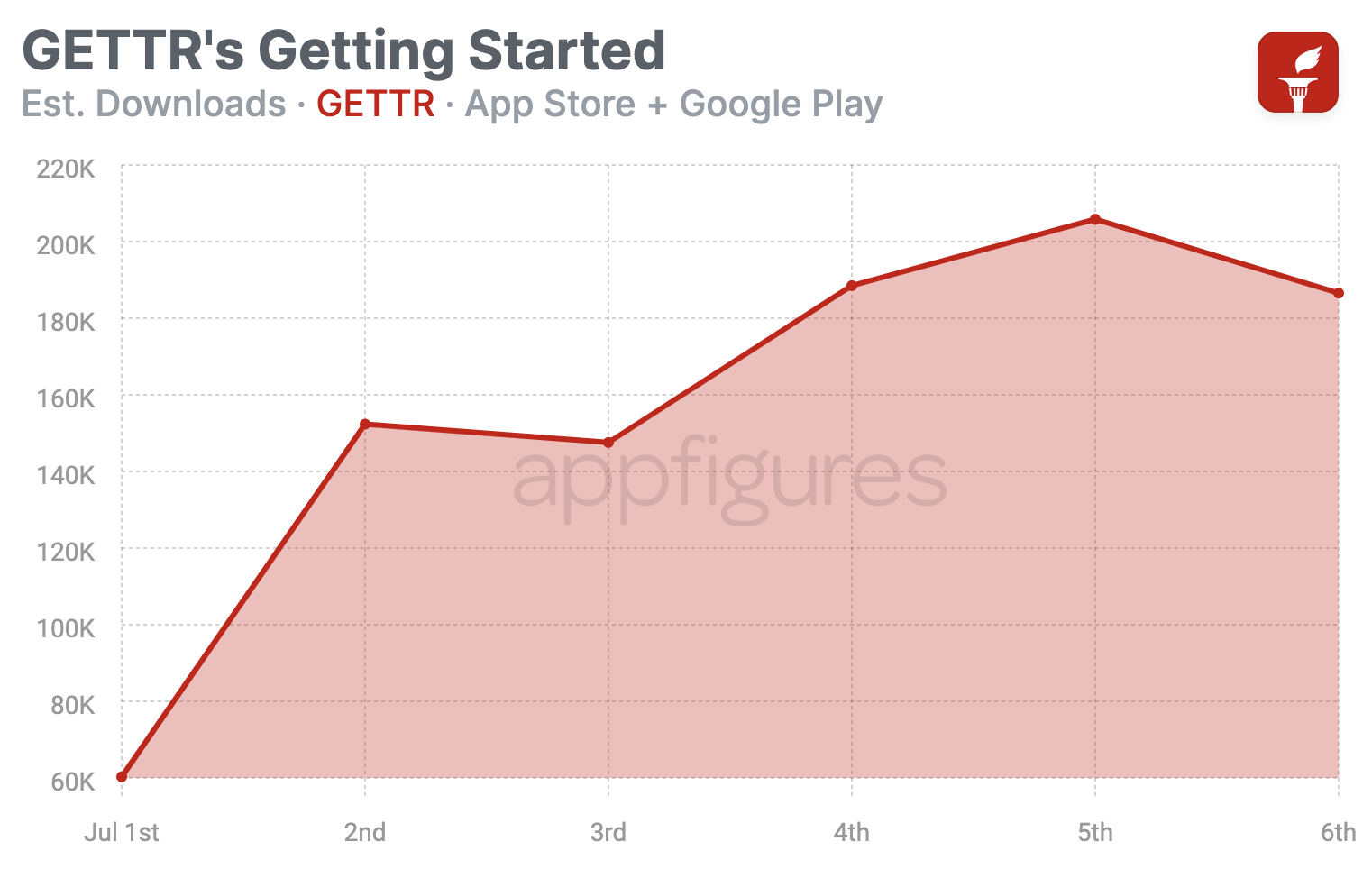 According to our estimates, GETTR was downloads 946K times between Thursday and Tuesday across the App Store and Google Play globally. Considering the announcement (and related news) came fairly late on Thursday, that's a great haul going into the long weekend.

For context, Parler was downloaded roughly 2,500 times in the same three-day period.

The news cycle seems abuzz by this release, so this trend isn't likely to stop or slow down in the coming days, which means the app is probably heading for a million downloads by next weekend.

As you would imagine, a good chunk of those downloads comes from the U.S., where the politics driving demand for GETTR is.

Curious what those other countries are? Brazil and Saudi Arabia.

Our estimates show that between Thursday and Tuesday, GETTR was downloaded by 151K iOS and Android phones in Brazil and 100K in Saudi Arabia. At 16% and 11% of the total downloads, respectively, Brazil and Saudi Arabia re the only other countries to have a double-digit share.

Clearly, the rest of the world is interested in U.S. politics.

But, Will it Stick?

GETTR comes at a time when there's demand for an anti-Twitter, so it's kind of expected to see it gaining traction. We saw a similar growth pattern for Parler last year.

But... Current demand isn't that indicative of long-run potential. If we learned anything from watching Parler's run, it has very little to do with it.

Unlike Parler, GETTR's ownership is very clear from the get-go, which raises the question, is GETTR a business venture?

As an echo chamber, it'll be hard for GETTR to be seen as a true social media network that can take on Twitter, so it's understandable that we don't see any type of monetization being built. But without it, the platform's future depends on whoever is bankrolling it, and that can be seen as a limiting factor.

Whatever happens, if GETTR aspires to become a real contender, it will have to, at least, give trend-setters ways to monetize, just like Twitch, TikTok, and now Twitter. At least it can learn from their adventures.