1. China hits the U.S. via the App Store

The big controversy this week revolves around Didi, China's Uber.

The company IPOd in the U.S. last week, raising 4.4B, with a B, from investors in a supersized IPO, only to get slapped by Chinese regulators and have the app removed from the App Store in China immediately.

Although Didi operates in several countries, China makes up the majority of downloads on the App Store. 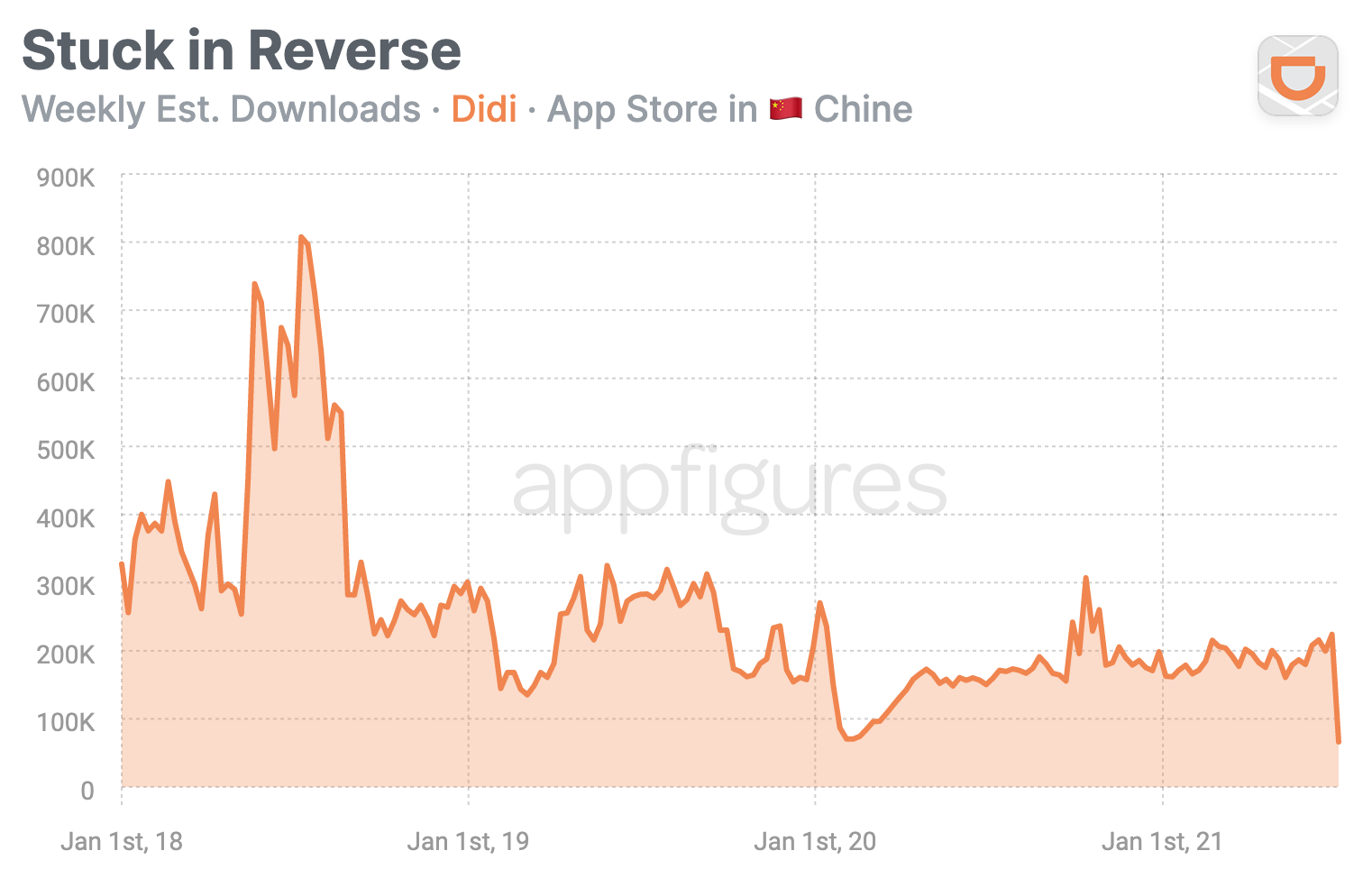 Since launching on the App Store in 2018, Didi's ride-hailing app was downloaded more than 102M Times—46.5M of those, from China. Although Didi's downloads suffered early into the pandemic, they've come up since. It's not fully back to normal, but it's not that far off.

So what? There are a few issues here. The first is that the regulators weren't super specific about why Didi can't be in the App Store anymore. The main thing was data handling, but I couldn't find what about it wasn't being done right.

Then we have the timing. The app was pulled from the store after investors sunk billions into the company. Almost immediately. That caused the stock to drop. In China's defense, it's been reported that regulators tried to stop the IPO but Didi did it anyway.

Is Didi a victim of the turbulent relationship between the U.S. and China? Will the stock recover once it fixes whatever regulators didn't like?

All good questions. In the meantime, Keep, another Chinese company that planned to IPO in the U.S., has canceled those plans.

One thing's clear, China prefers its companies to go public locally and not in the U.S.

Last week I had a quick look at GETTR, a new social media app that vows to protect free speech from ex-trump spokesperson Jason Miller (not Trump, as some have reported).

The app launched last Thursday and quickly rose to the top of the U.S. chart, peaking at #11 within 24 hours. It's since sunk to #91. A week in, we now have a better understanding of just how much demand there is for GETTR and where it's coming from.

Report: Move Aside Parler, GETTR's Here to Take Over. Twitter, Too?

Between the app's "official" release (7/1) and this Tuesday (7/6), GETTR was downloaded by more than 946K People via the App Store and Google Play globally, according to our estimates.

With the downloads also came headaches. The week was rough for GETTR. Lots of spam, scrapers, and a hacking attempt are making it harder for the company to focus on growth.

Will it stick? It's too early to tell. If you remember, my point last week was that if it's run as a business venture, the key to its success would be helping creators monetize. If it isn't, all bets are off, and Twitter is in for a ride, which likely means GETTR is too.

Some of you wrote back and shared different views, but I still stand by my analysis. For a simple reason—Even if GETTR is being bankrolled by someone with deep pockets who wants to make a political point, the app still operates in the same world as Twitter, and the things necessary to operate it (security, moderation, etc.) aren't cheap. At some point, the deep pockets will close, and GETTR will have to face the brutal nature of making money from a free service.

3. The neighborhood is getting bigger

Another IPO that's happening now is Nextdoor, an app for neighborhoods to stay connected.

If you look at Nextdoor's history, you'll see the only way forward for the ten-year-old company was an IPO. Nextdoor has raised $455M, suggesting investors trust the company enough to keep giving them more money, but also that it wasn't sustainable enough to continue on their own.

Let's see what six rounds of VC (F, if you're converting) raises can acquire: 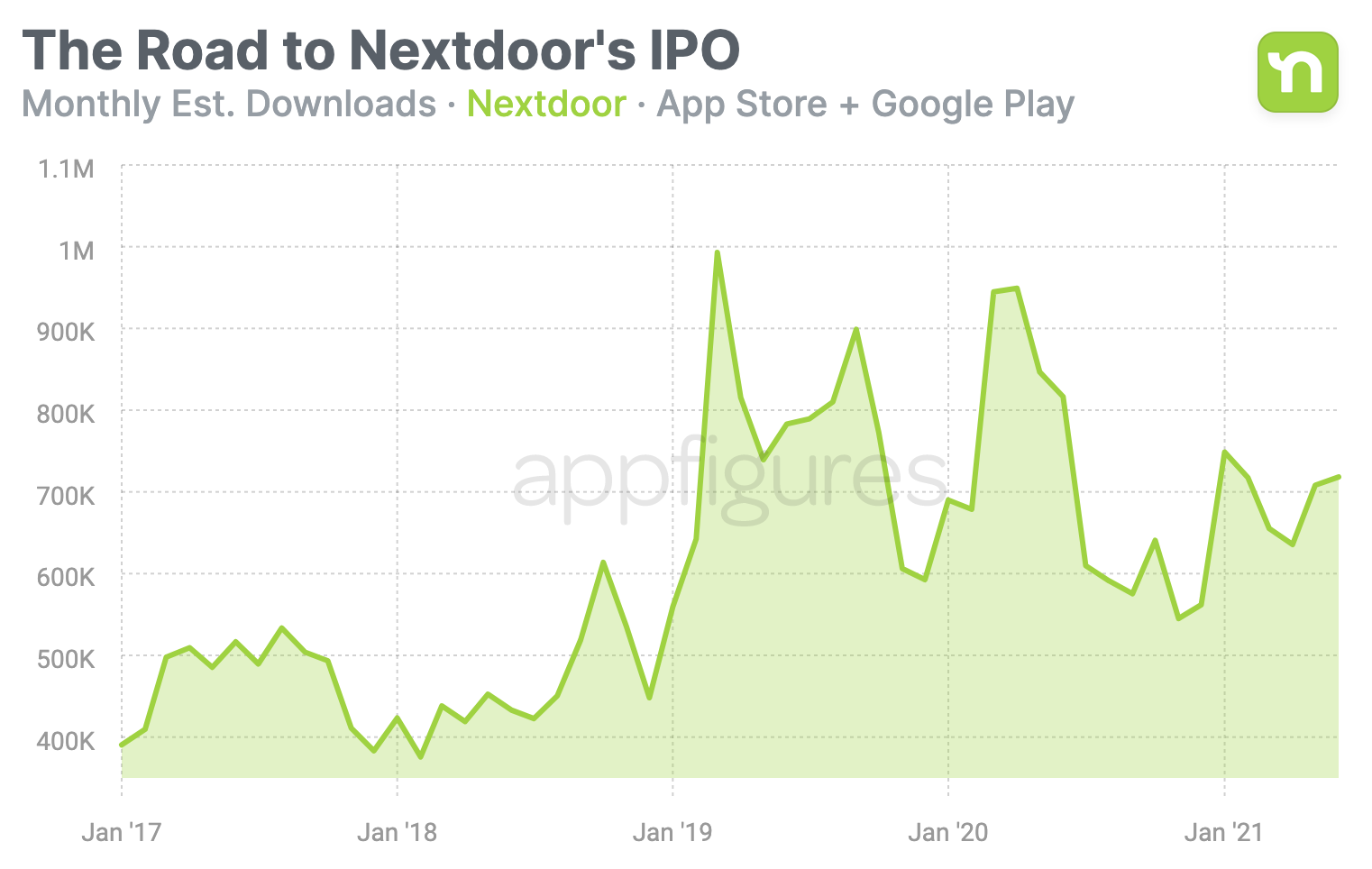 Our estimates show that Nextdoor was downloaded 33M times across the App Store and Google Play since 2017. 2019 was a mega year for the app, adding 9M downloads, up 60% from 2018's total. The pandemic kept downloads strong with 8.5M downloads, according to our app intelligence.

In addition to communicating with neighbors, Nextdoor users can see local, personal, or general ads. In context, that's a really great way to advertise hyper-local businesses (think, neighborhood plumber) that would otherwise have to rely on word of mouth. It's also a good way to offer larger brands a peek into parts of our lives that feel smaller and more private.

Can it grow? Seeing as more people rely on their mobile devices and that social media has gotten us so accustomed to messaging, Nextdoor's path to continued growth is pretty clear. I suspect we'll be able to see a strong correlation between its downloads and stock price later this year.

Clubhouse, the audio-only social network and not the project management software, has reached a new milestone this week. 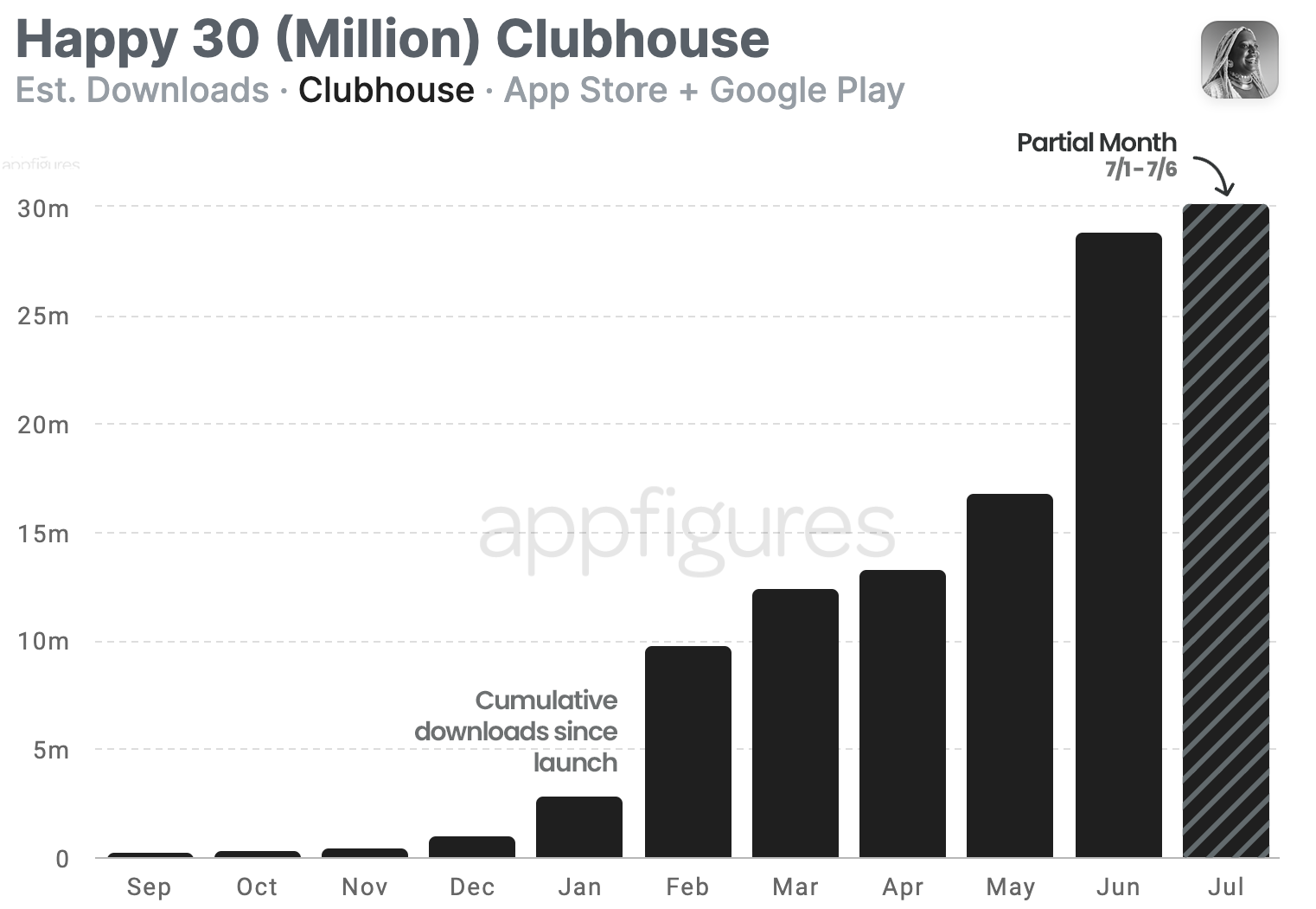 Not even a year old, Clubhouse has now been downloaded 30,000,000 times between the App Store and google play.

Clubhouse's road to 30M was an interesting one.

A few months went by, and it felt like Clubhouse was a phase many getting out of. Then came Android. That's right, all of those numbers were for the iOS app alone.

Going Android in May, a move some considered to have come too late, not only gave Clubhouse access to a brand new (and massive) market, but it also re-sparked interest from the App Store side, which stagnated after the peak in February.

Right after the launch of the Android app, downloads of the iOS app spiked to yet a new daily high of 472K on Jun. 6th. On the Android side, since launch, Clubhouse was downloaded nearly 10M times from Google Play globally, according to our estimates.

Bottom line, Clubhouse is in a unique position where it's the leader in a market it invented. Twitter did something similar, and now, many years later, it's still unbeaten. And not for lack of trying.

Clubhouse is putting down those roots that will enable it to eliminate (maybe that's too strong of a word, but that's the goal) future competition from larger and more formidable opponents. So far, Clubhouse is still the leader

And keeping with tradition, let's end on a high note by looking at a trend that's related to the unlockdown — Cruises.

The cruise ship industry was big pre covid, as we can see from downloads of the largest two lines. Carnival And Royal Caribbean. But it was one of the first to get hit by the pandemic and has been grounded until very recently.

Since the announcement of cruises resuming, downloads have started climbing.

So far this year, downloads for both Carnival and Royal Caribbean have quadrupled. Both started the year with about 2.5K new downloads per week. That number has been climbing slowly as more things started to reopen, and the companies have started to engage customers with the idea of future trips. Last week, both apps crossed 9K downloads, almost four times higher than January, according to our estimates.

That's great news for Carnival, Royal Caribbean, and the many who have been waiting to board a big ship in the last year. But... there's a lot of sailing to be done before we get back to pre-pandemic downloads. In 2019, Carnival and Royal Caribbean added 50K and 35K downloads per week, respectively, according to our estimates.