This Week in Apps #81 - Gotta Be Original

1. Apple Wants to Know What You Think

Apple quietly rolled out a small change with an interesting impact a couple of weeks ago. They made it possible to rate apps that come pre-installed on every iPhone, like the Calculator and Mail.

Ratings have become a good barometer for app quality and are also a deciding factor in how Apple and Google rank search results (aka. ASO). That's why many developers, big and small, are paying a lot more attention to their ratings and are working hard to keep their average high.

If you aren't, check this out. 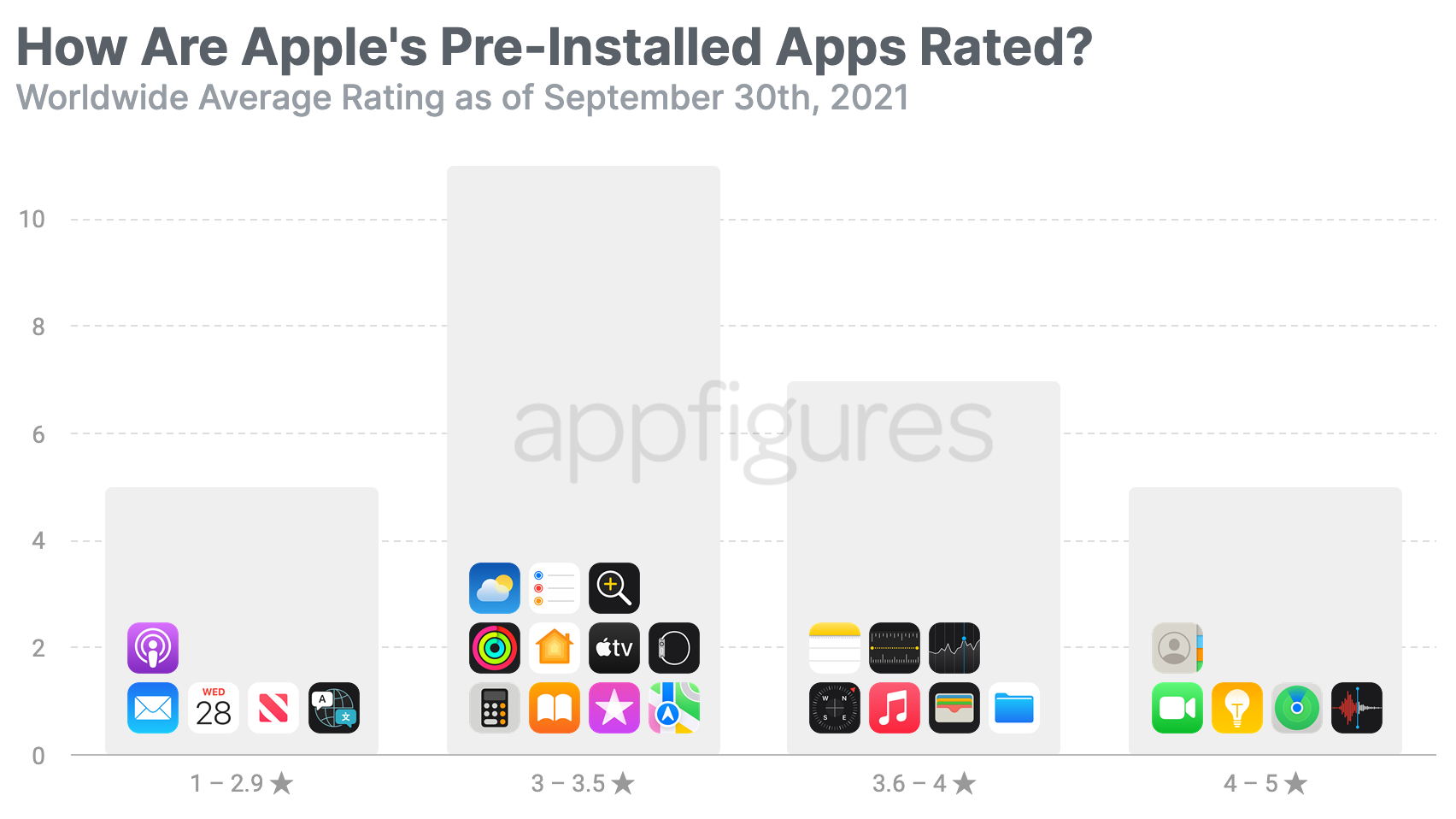 Curious which apps users hate and which they love? I was too! Now that we're about 10,000 ratings in, I crunched the numbers and calculated the average rating for every pre-installed app globally.

The results were only somewhat surprising.

In total, I looked at 28 apps with a total of 9,709 ratings worldwide. The average rating across the entire portfolio was just 3.4, with the app most users like holding a 4.1 average while the one users seem to hate having a 2.2 star average.

Can you guess which apps those are?

Translate is the most hated pre-installed app, with a 2.1 average and 693 ratings. That's about 7% of all ratings. I don't use it often because it... isn't good. Contacts earned the most love with a 4.1 average and 159 ratings.

Mail, Podcasts, and News are rated under 3 stars, while FaceTime, Tips (that's right), Find My, and Voice Memos have a 4+ rating.

Why Apple, Why??? This could be a regulatory move to make it seem like Apple doesn't have an unfair advantage for its apps, which now span a wide range of functions. It could also be that Apple really wants to know how users feel about its apps so it can decide which to prioritize for improvement. I want to believe the latter, but my gut says the former. Regardless, this will likely give Apple's apps more visibility in search results, which is something to keep an eye on if your app competes with any of them.

I look at streamers fairly often, and most of the attention goes to HBO Max and Disney+, the two fairly new apps that have taken mobile by storm. Where storm = revenue.

But there's another player that's been quietly holding on to the 3rd spot for a very long time. That's Hulu. 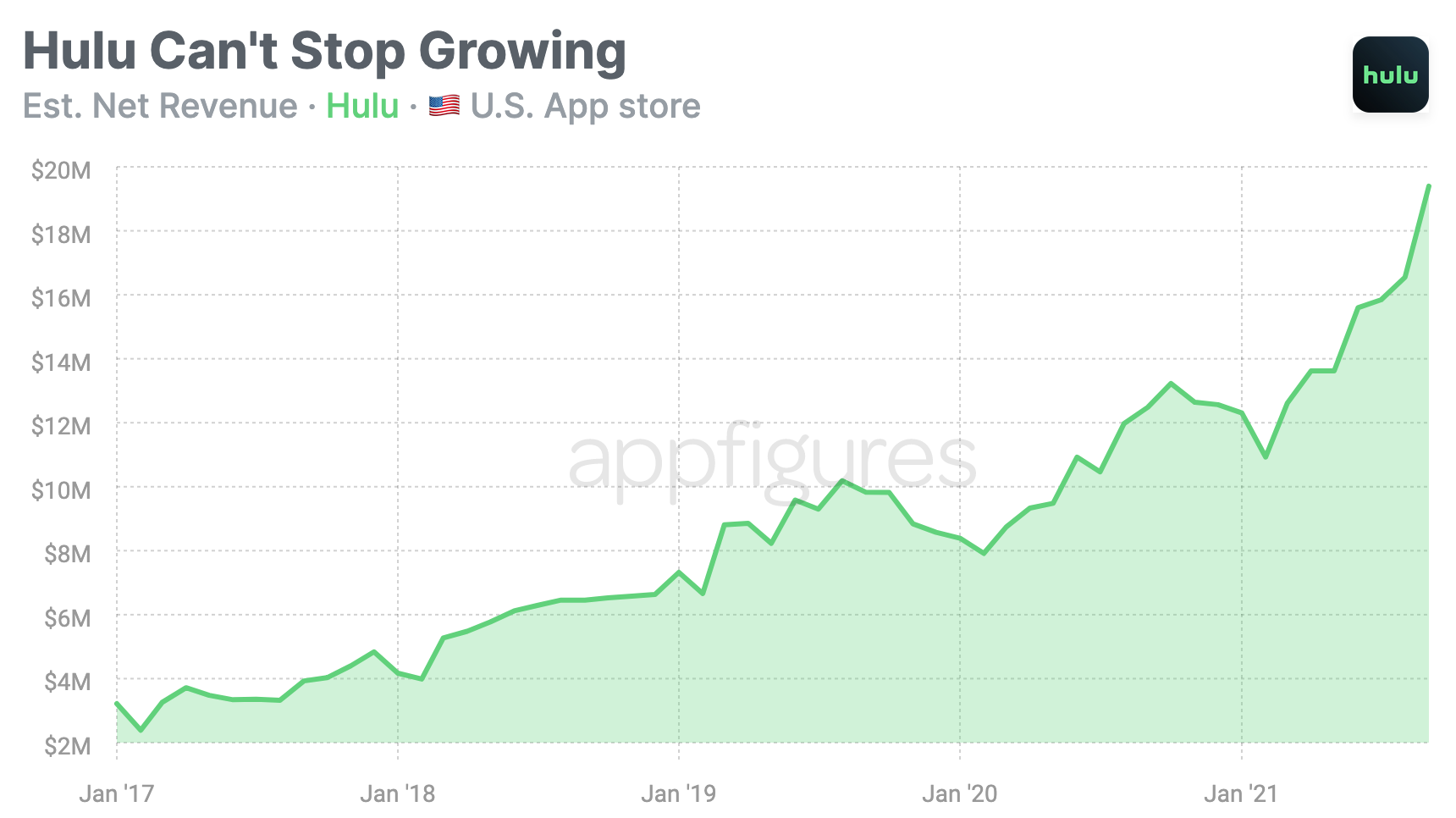 Hulu has been around for as long as I can remember and while it's always been there and growing its earnings steadily, you rarely hear about it. That's because it's not as aggressive with its original content. But! That seems to be changing, and it's showing results.

In September, the streamer saw its largest growth, by absolute numbers, in its entire existence. According to our estimates, Hulu earned $19.4M of net revenue in the U.S. App Store in September. It earned $16.6M in August, which was already higher than July's $15.8M haul. And this is all net, meaning after they pay Apple their 15%/30% fee.

Go go original content! The name of the game is original content, loads and loads of original content. Now more than ever. We can see that those that get it will succeed. The real question is whether original movies and original TV shows will offer the same growth with the mobile crowd.

3. Netflix Hits Another One Out of the Park

Original content has been the name of the game for a long time now. It's what's keeping HBO Max and Disney+ at the top of the revenue chart and what most other streamers, like Hulu, are starting to realize is a necessity to succeed.

But remember who (kind of) started it all? Netflix! The first mover isn't always the winner, and Netflix is facing fierce competition these days, but that hasn't stopped it from continuing to produce originals.

Its latest original, Squid Game, is also giving the 11-year-old app a lot of new downloads. 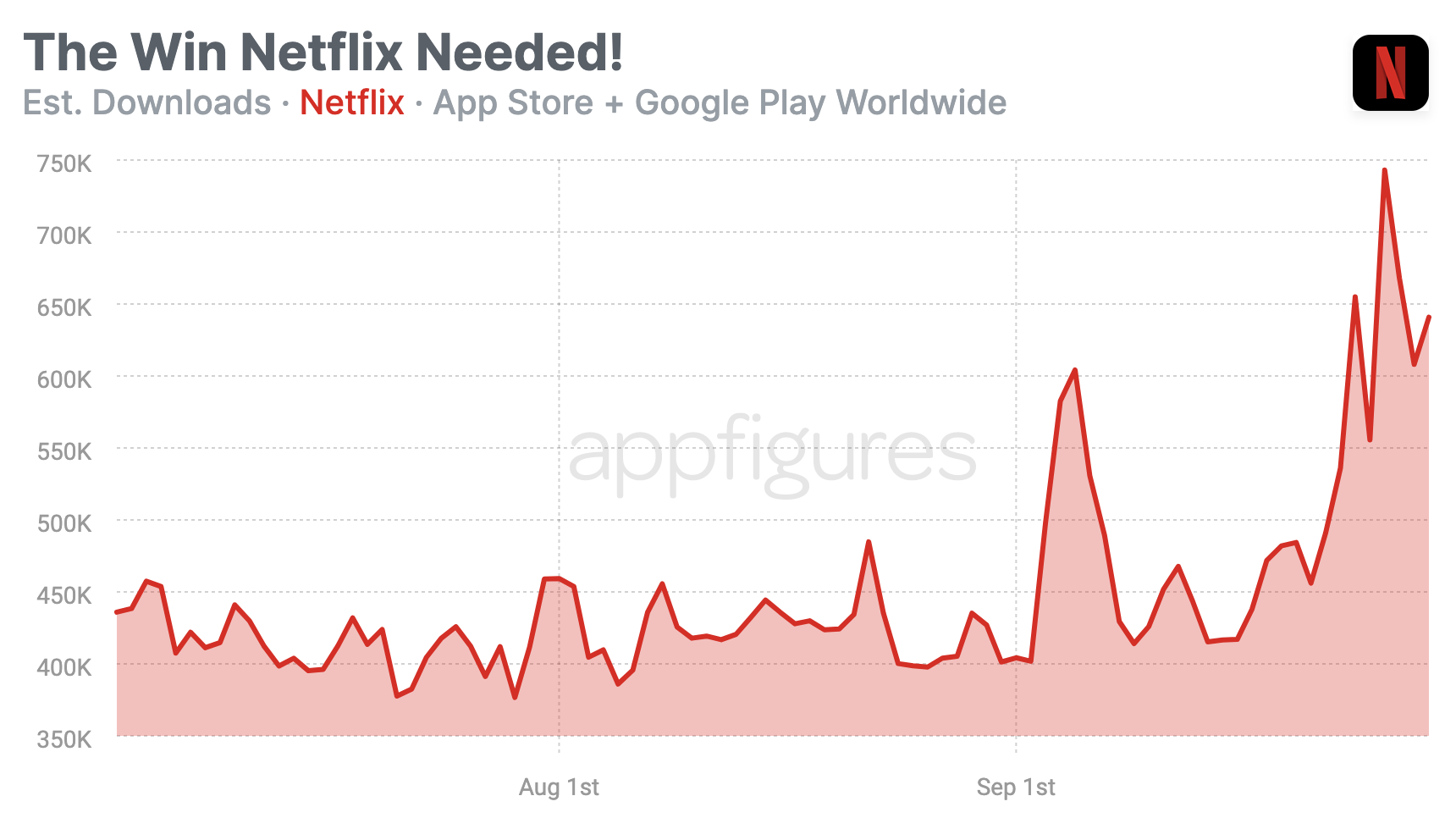 The most downloads this year, for a single day, actually.

Last Sunday, Netflix was downloaded 743K times globally, across the App Store and Google Play, according to our estimates. This new milestone beats the 663K downloads Netflix saw on Jan. 2nd, one of the hottest times for streaming services.

Downloads have slowed down since this peak, but are still significantly--more than 50%--higher than the daily average of the last few weeks.

This is great news for the OG streamer that's been cranking out so much new content it's easy to assume they're trying everything. Fierce competition has been hurting Netflix's downloads over the last few years, so much so that they're getting into game development.

Originals continue to be the way streamers win, something Netflix will likely just expand on with games.

4. A Better Way to Learn Math?

Like most things, tutoring is moving in-app. Photomath has been the clear leader in the math tutoring space for a very long time, and demand for it has been going strong for several years.

So strong that it led to competition. 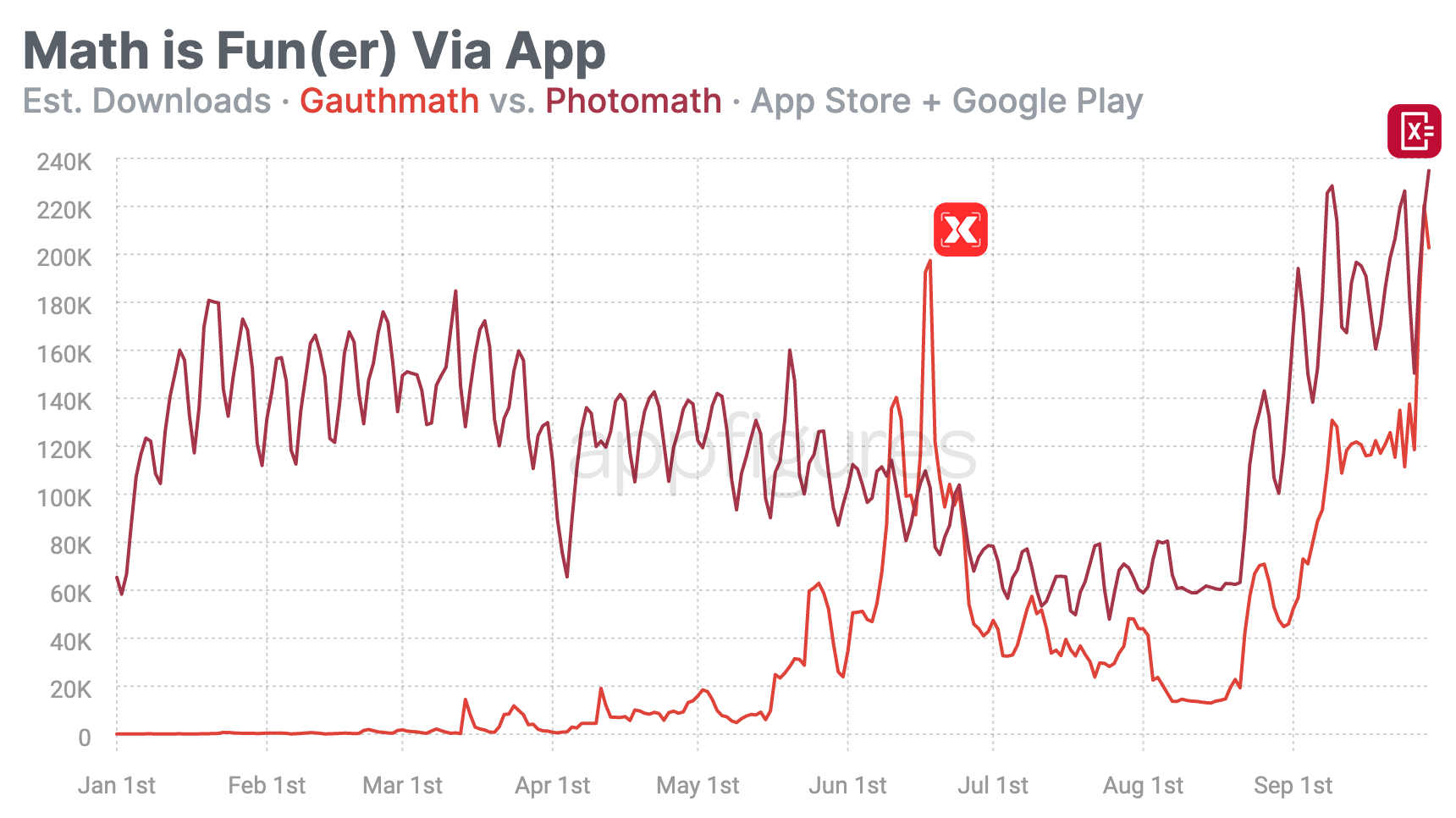 Gauthmath rolled out in late 2020, at the tail end of the crazy growth Photomath saw due to schools moving into bedrooms. It had a slow start, but lately, it's been seeing a lot more downloads. Enough to challenge Photomath.

Since schools got back in late August and demand (re)started, the two have been at it.

The latest spike for Gauthmath started mid-month, which is why it ended September with fewer downloads, but don't let that fool you. At the rate they're going, now the folks over at Photomath should be keeping a close watch.

Math has always been a tricky subject for many, which is why we see so much demand for such apps (and not bio...). With less real access to teachers and tutors, this shift makes perfect sense. I fully expect to see demand for such tutoring apps to grow and for the field to get more competitive.

5. A Look at the Numbers Behind Pokémon Unite

Last week I looked at the latest release from Pokémon. It was too new so we didn't have too much in the form of numbers. We're a little over a week in, and now we do. And they're more interesting than what we initially saw after launch.

And, by interesting I really mean higher. 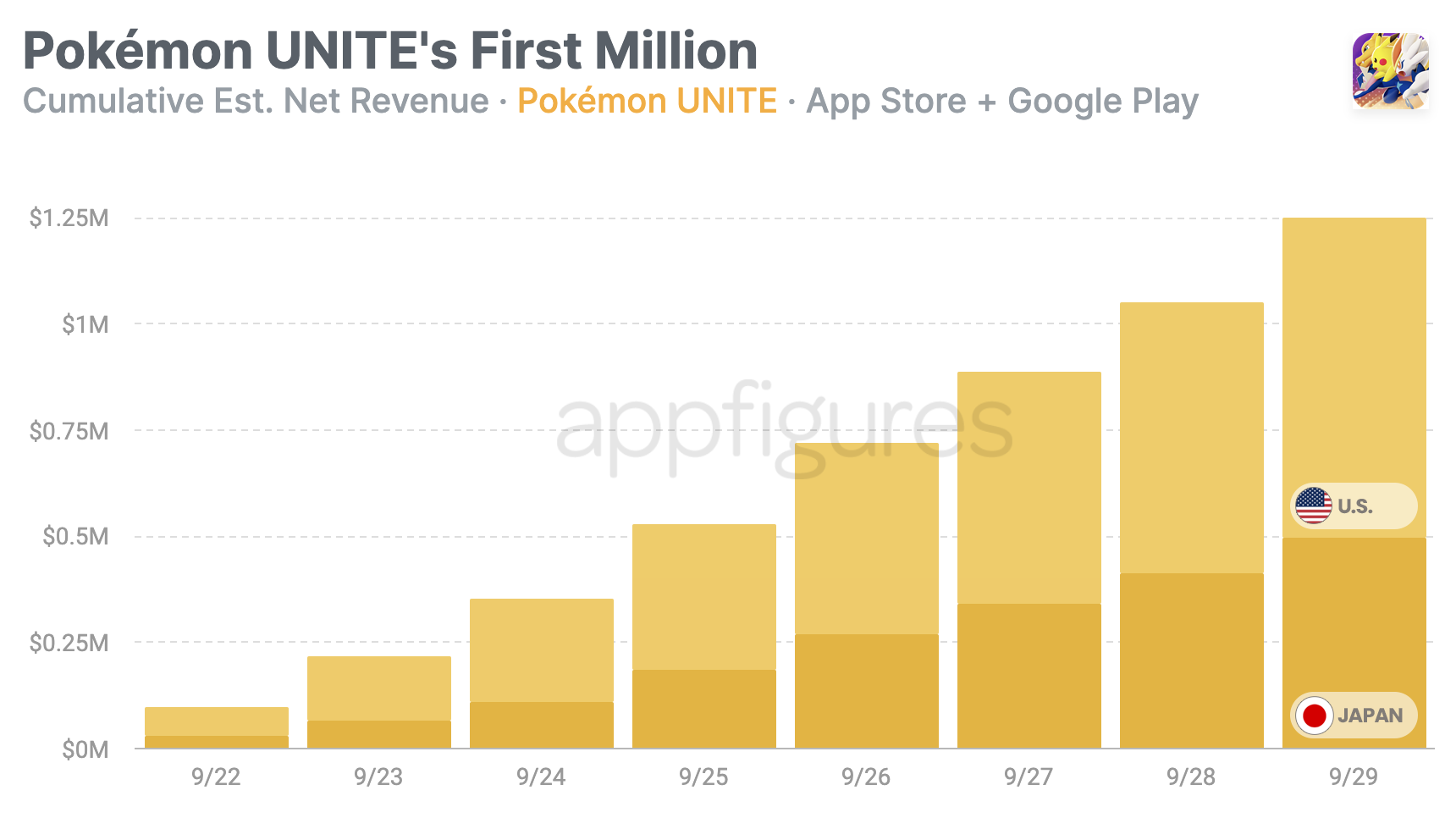 Let's start with downloads. Since its release, Pokémon Unite was downloaded more than 6.1M times between last Wednesday and this Wednesday, according to our estimates. India lad the way, followed by the U.S. and Brazil. A pretty standard open for a game these days.

In its first day, Pokémon Unite brought in $97K from the U.S. and Japan, the two major markets for the game, according to our estimates. That grew every day, ending with more than double on Wednesday (9/29), $199K of net revenue from those two countries. That's after Apple and Google took their fees.

By Wednesday, the game had earned $1.25M from the two countries combined.

I kept the focus on the U.S. and Japan because the rest didn't even get close... They had the downloads, but they just don't seem to convert, which is a trend we've seen more than once with games recently. There's probably some sort of opportunity in there.