Welcome to App Teardowns, a series where we analyze how popular apps and games use App Store Optimization to gain visibility and downloads on the App Store and Google Play so you can learn what to do and what not to do with your apps and games.

Food delivery is a very interesting area of the App Store to explore. It's extremely competitive, there aren't too many popular competitors, and of those competitors, they're all targeting the exact same search term.

So, how can you win when everyone's practically doing the exact same thing?

Overall, DoorDash earns an A.

DoorDash by the Numbers

Here's how DoorDash is performing in the U.S. App Store, based on our App Intelligence:

And Then Came COVID 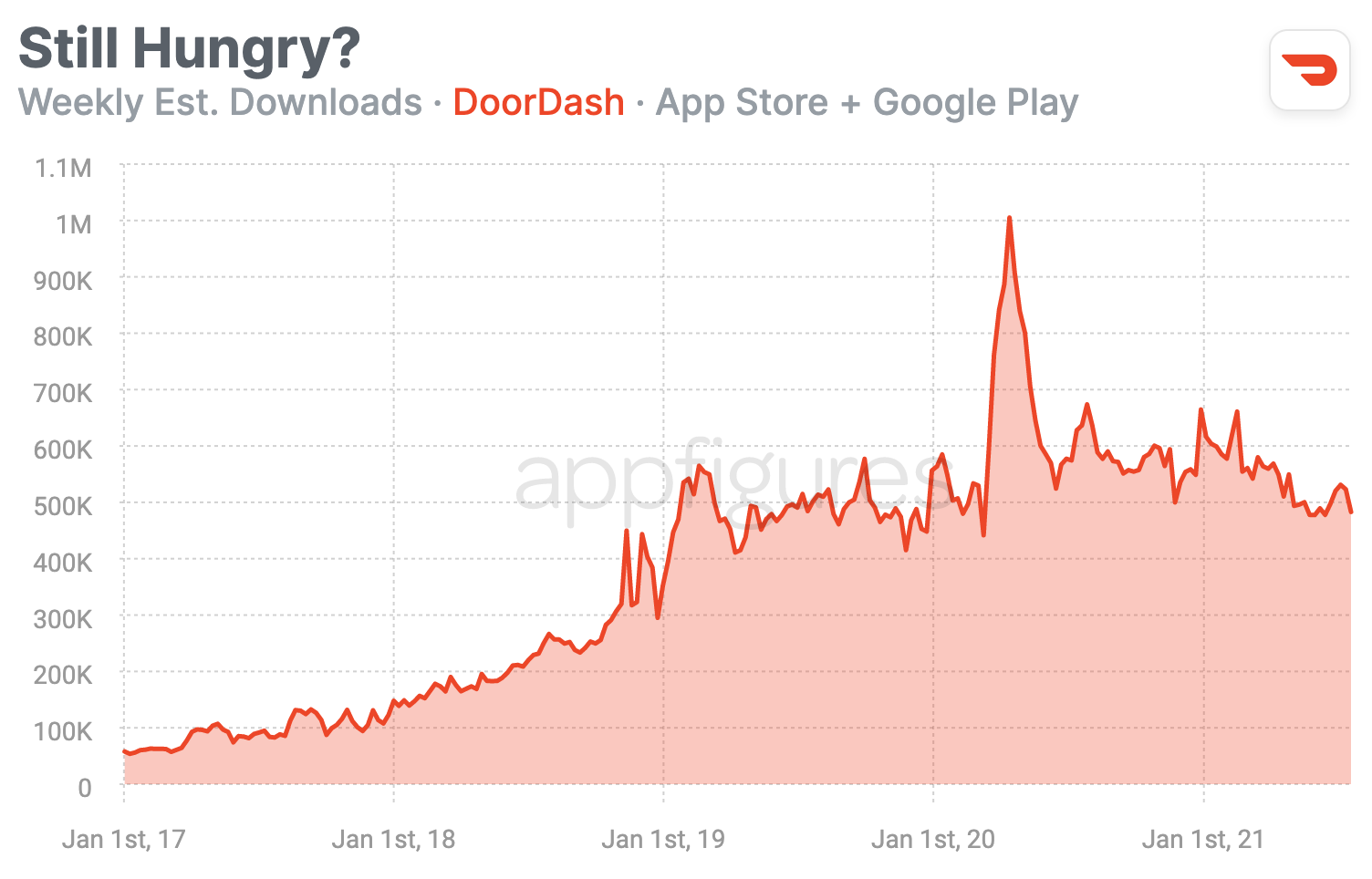 Remember the days when food delivery was a market owned by Seamless? Things were simpler back then... But Seamless was missing a crucial component, actually delivery. That's the gap DoorDash and Uber Eats came to bridge.

It took a while to take off, but it certainly did.

DoorDash vs. the Competition

Competition for DoorDash comes from all around. But its main rival is Uber Eats, which recently acquired another competitor, Postmates, and now commands two search results.

Here's a look at where DoorDash sits in its niche, based on our app intelligence: 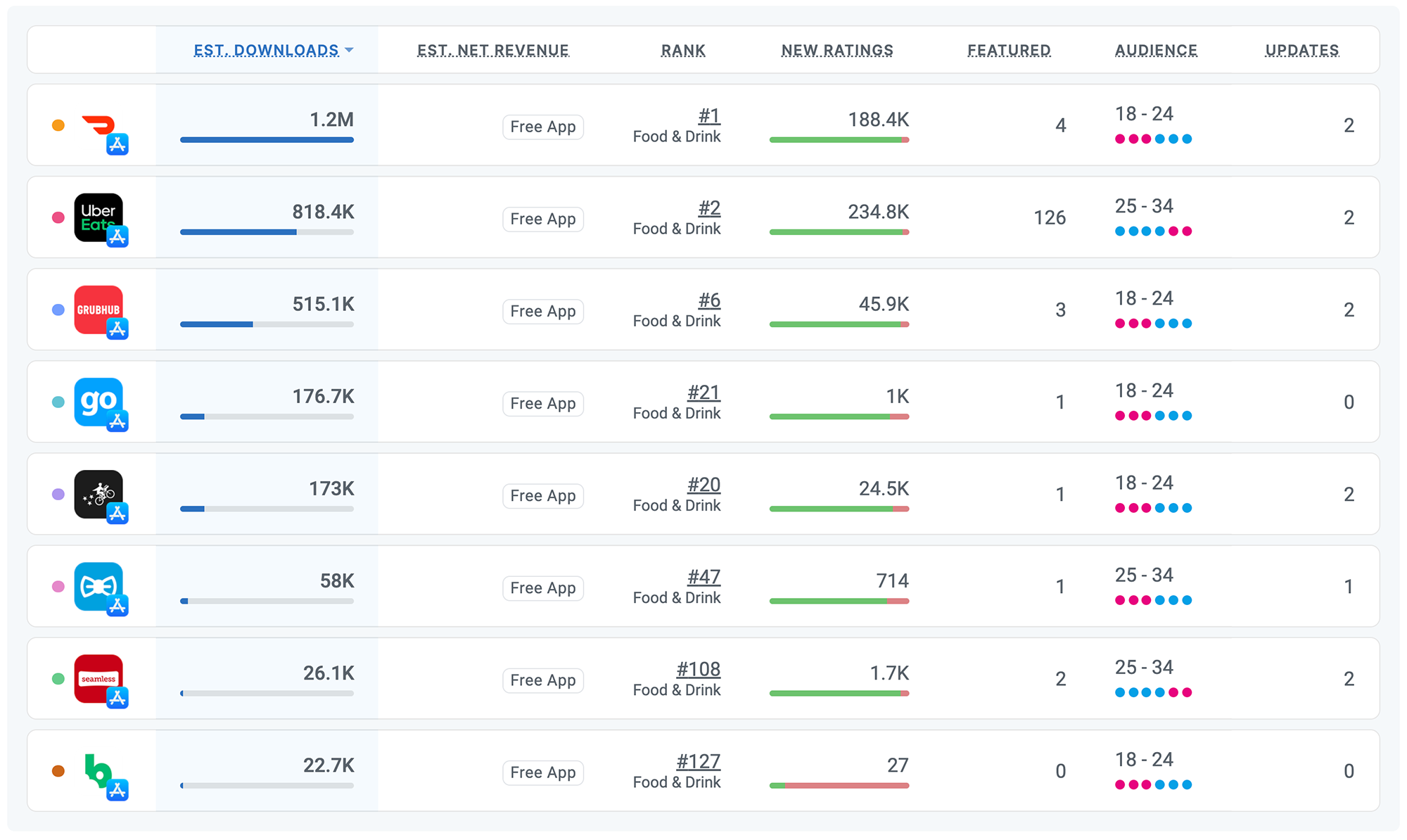 Really, DoorDash not only competes with Uber Eats and similar companies but also with restaurant chains that want to bypass the commission and deliver direct, like Burger King, McDonald's, Chipotle, and others. I specifically left the latter group out of this analysis because it's easy to argue DoorDash offers the kind of variety those apps can't.

Among apps like it, DoorDash is the king. It beats Uber Eats, Grubhub, and Postmates in downloads. And Seamless, remember them? They're barely making this list. What a difference a few years make.

One thing that caught my eye is the number of times Uber was featured vs. the rest. Apple must really like Uber Eats these days.

How is DoorDash Found?

Now that we know what we're dealing with, let's have a look at the keywords that drive discovery and downloads for DoorDash: 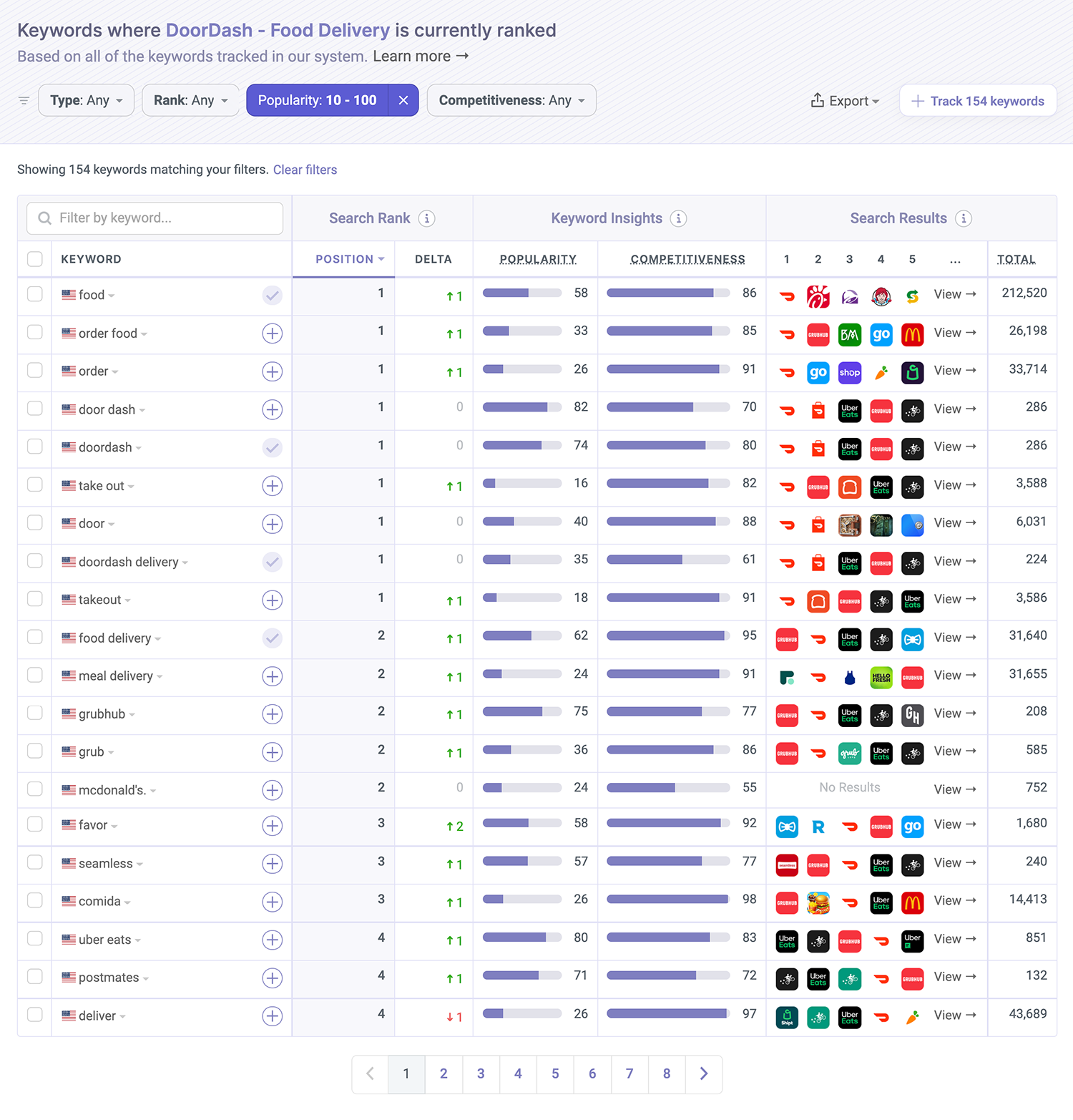 Right off the bat, we can see DoorDash ranks pretty well in quite a few keywords. There are some brand names but mainly relevant keywords that are very popular. Being in one of those is nice. Being in 20+ is nicer.

A note on competitors - If you go through a few pages of results, you'll see a lot of competitor names in this list. I always say to stay away from competitor names, something I'm pretty sure DoorDash isn't wasting characters on. Why is it still ranking for them?

The App Store's algorithm associates apps by where they rank in their category and uses that when providing search results, so it lumps together the popular food delivery apps. If you think about it, there's logic there. If you're at the top of your category, the algorithm will help you out as well. But also your competitors...

Let's dig in by looking at the keywords DoorDash is targeting in its name and subtitle. Those two send the strongest signals to the App Store's algorithm.

Food delivery is by far the most coveted keyword in this list. That's why DoorDash--and all of its competitors--use it and only it in their apps' names. The rest are a great set, though.

Focus and you shall receive:

What we see here is really the essentials, but done well. All of the focus is given to the more important keyword. The subtitle is used for keywords that combine with the name, and overall, reads like something a human would understand. And it works.

I've pointed out what focusing looks like and what the lack of focus looks like in previous Teardowns. By now, you should know that it's important.

When you first think about the kind of keywords an app like DoorDash could use, the list isn't all that long. People want to eat, and they want it delivered, so they want "food delivery". Yup, that's the most important term, with a popularity score of 62 and an appearance in the name of every competitor.

But ASO is about the long-tail, too. To that end, DoorDash managed to find a good variety of keywords that represent the same intent, are actionable, and combine very well with other keywords in this list, the app's name, and subtitle.

I see two different groups here that combine well together:

Best of all, they combine well with "delivery" and "order", which means that between the name, subtitle, and keyword list DoorDash is covering a lot of ground.

Nice and simple, contrast, captions, and people. Oh yea, no video. On the one hand, an App preview can really help engage people by showing them pictures of what they want most (and why they'd download the app)--food. I hope there's no video because A/B testing showed it didn't help and not because they didn't even try. 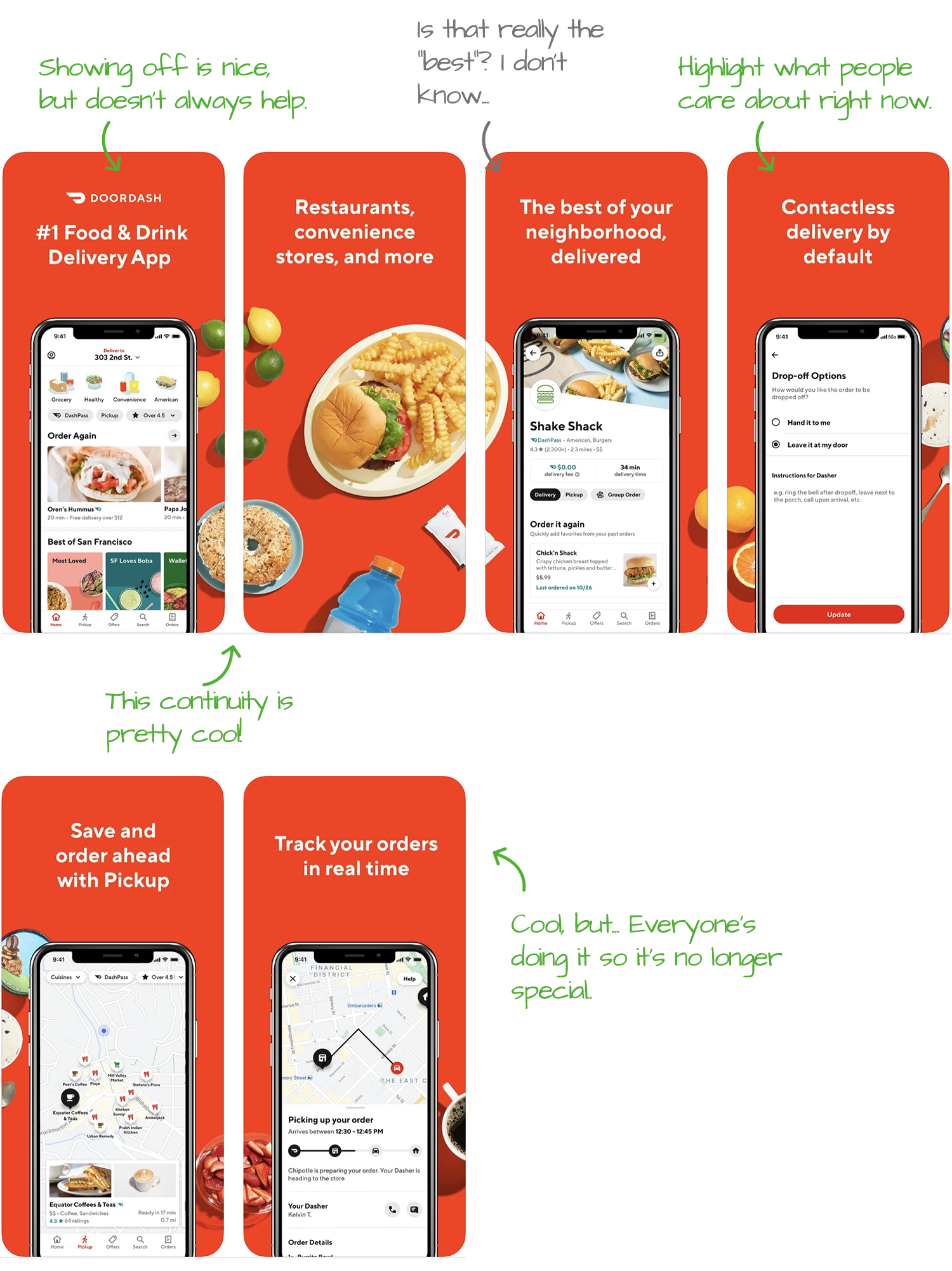 The screenshots, however, check almost every box. Skipping all the good ones, let's focus on what's missing. Six screenshots isn't bad, and possibly enough, but why not use every chance you can to increase your conversion? Again, people are looking for something very specific when they're downloading this app. It's the kind that comes in a variety of flavors and can look really great and tantalizing. Use that!

But the one that can help even more is simply asking the viewer to download/get the app. We don't see it in many apps, and that's because most marketers and developers think that people come to the app's page to download it. That's almost true. People come to the App Store to download an app (or a game, if that's the context), which isn't necessarily as clear cut, especially not if the search term wasn't the company's name.

In case it isn't obvious, this one's ripe for A/B testing screenshots. They probably have in the past, but with iOS 15's built-in A/B tests, I expect to see an endless stream. You should get ready for that too. Here are a few ideas for things you should try: 16 A/B Tests You Must Try If You Want More Downloads

What Data is DoorDash Collecting?

In this new(ish) section, we look at the privacy labels apps declare on the App Store. DoorDash is definitely collecting, but considering it's a free app, it's not too bad.

There's a lot going on under of the hood of this seemingly simple app. But... it all makes sense. Any system you can log into requires some set of identifiers. Location, financial info, contact info, and purchases also make sense.

Apple has a category called "Other Data," which isn't as common, but DoorDash is using. It's hard to tell what's being collected there but given everything else already disclosed I can't think of anything too dangerous appearing there.

Here are all the SDKs and APIs we see powering DoorDash:

Yup, a lot going on in here as well. Nothing that's unexpected, given DoorDash's entire business relies on its mobile app. Let's take a closer look at the important ones:

There are a few companies I wasn't aware of in this list, so we both learned something today!

Also, notice how DoorDash uses ATT but doesn't run any of the ad SDKs we're used to seeing? That's because it's using the unique identifier for cross-channel marketing, meaning to identify users across different channels that may not share the same ID.

This is pretty common behavior, but! with ATT, DoorDash, like many others, is probably not getting great opt-in rates. So, is it even worth asking? I think that's something many companies will be asking themselves over the next few months, as ATT prompts become more friction than the value they offer.

The Verdict: Eating it Up!

It's always great to see a team take the time to understand its competitive landscape and find keywords that really help it own its category. It's even nicer to see an app that's incredibly popular and spends oodles on paid ads take the time to do that.

DoorDash does, and DoorDash has the results to show for it.

If you think you need a big budget to replicate this success, you aren't wrong, but only if you're battling DoorDash itself. Most categories and verticals are far from being so competitive, and if you use the right tools with an experimental mindset, you can get very far all on your own.

How I Use Our ASO Tools

Fun fact - I did this entire analysis with our ASO tools and App Intelligence, the same ones hundreds of thousands of app makers and marketers rely on to monitor and optimize their apps. Want to see my process? Check out some of my live teardown sessions.