It's NBA playoff season, and whether you're a die-hard fan or just curious about what's going on, you'd probably like the news to come from the most official source. In this App Teardown, we're going to look at the official app of the NBA and what it does, during its hottest season, to get found.

Overall, NBA earns an A

NBA by the Numbers

Here's how the NBA's official app is performing in the U.S. App Store, based on our App Intelligence:

Tis the Season (for Basketball)

Let's have a quick look at downloads to see just how big the season is for the app: 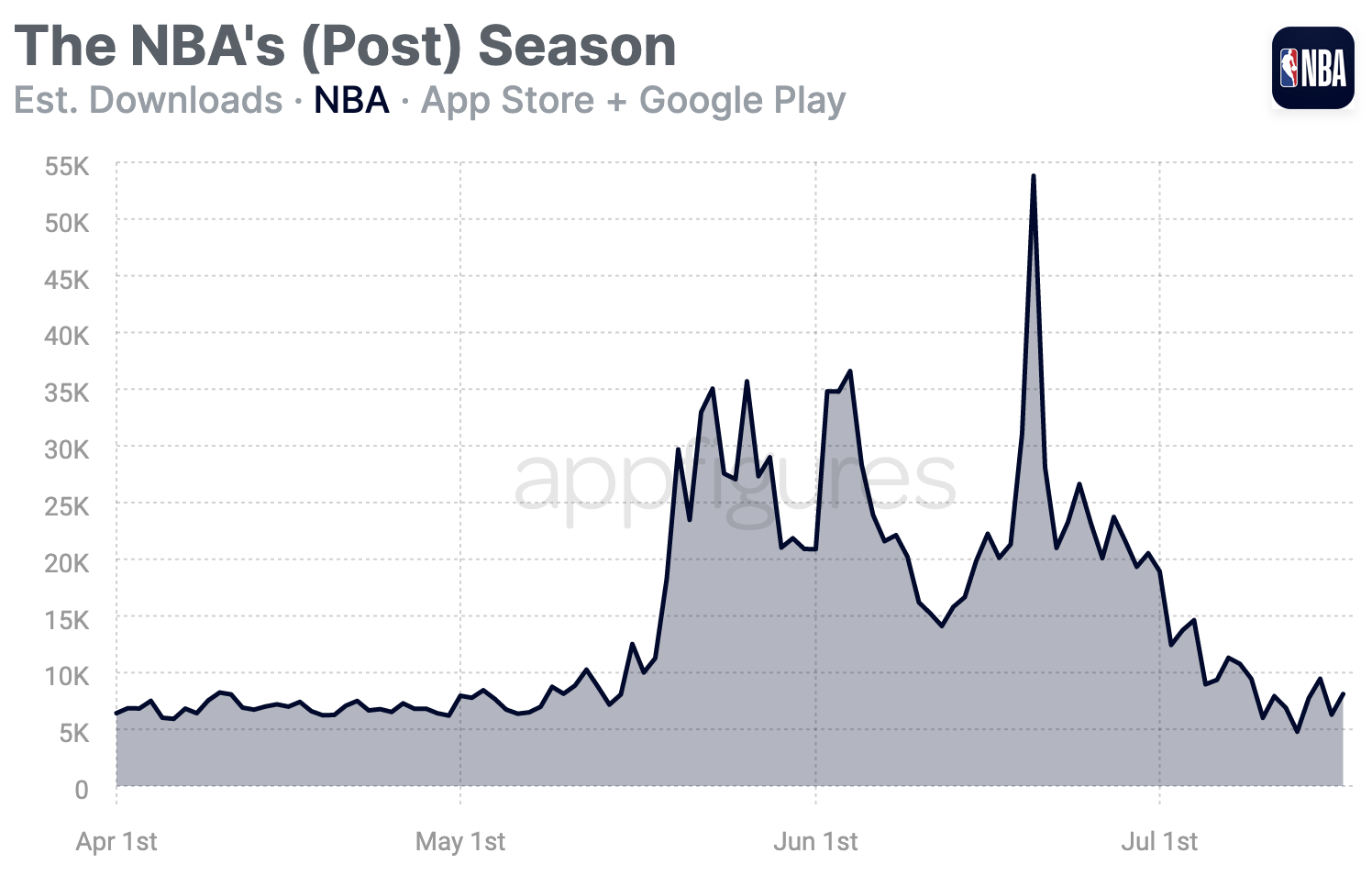 Although basketball is pretty popular in the U.S. year-round, it isn't until the post-season where it gets the most attention. We can see that with downloads fairly directly.

Our estimates show that downloads before the playoffs averaged a tad over 6K/day. Once the playoffs started, that average rose into the 30K area with a peak of more than 50K.

Needless to say, this is the most important time for discovery. Sure, the NBA is a big brand, but when it comes to news, there are many options.

NBA vs. the Competition

Although the NBA is the NBA, when it comes to news and even streaming games, there are others who can offer the same content.

I chose a mix of apps based on how they appear in search results. While ESPN dominates downloads NBA has a pretty strong foothold that can't be discounted. If you look at the table close enough, you'll notice its audience is a tiny bit older than the rest.

What I find interesting is the small number of ratings. Hundreds of thousands of downloads should yield more than just hundreds of new ratings. Not only does this not make a good impression on potential users, but it also hurts rank positions.

Tip: If you aren't already, make sure to ask your users to rate your app!

How is NBA Found?

To start, let's take a look at where the NBA is currently found in the U.S. App Store: 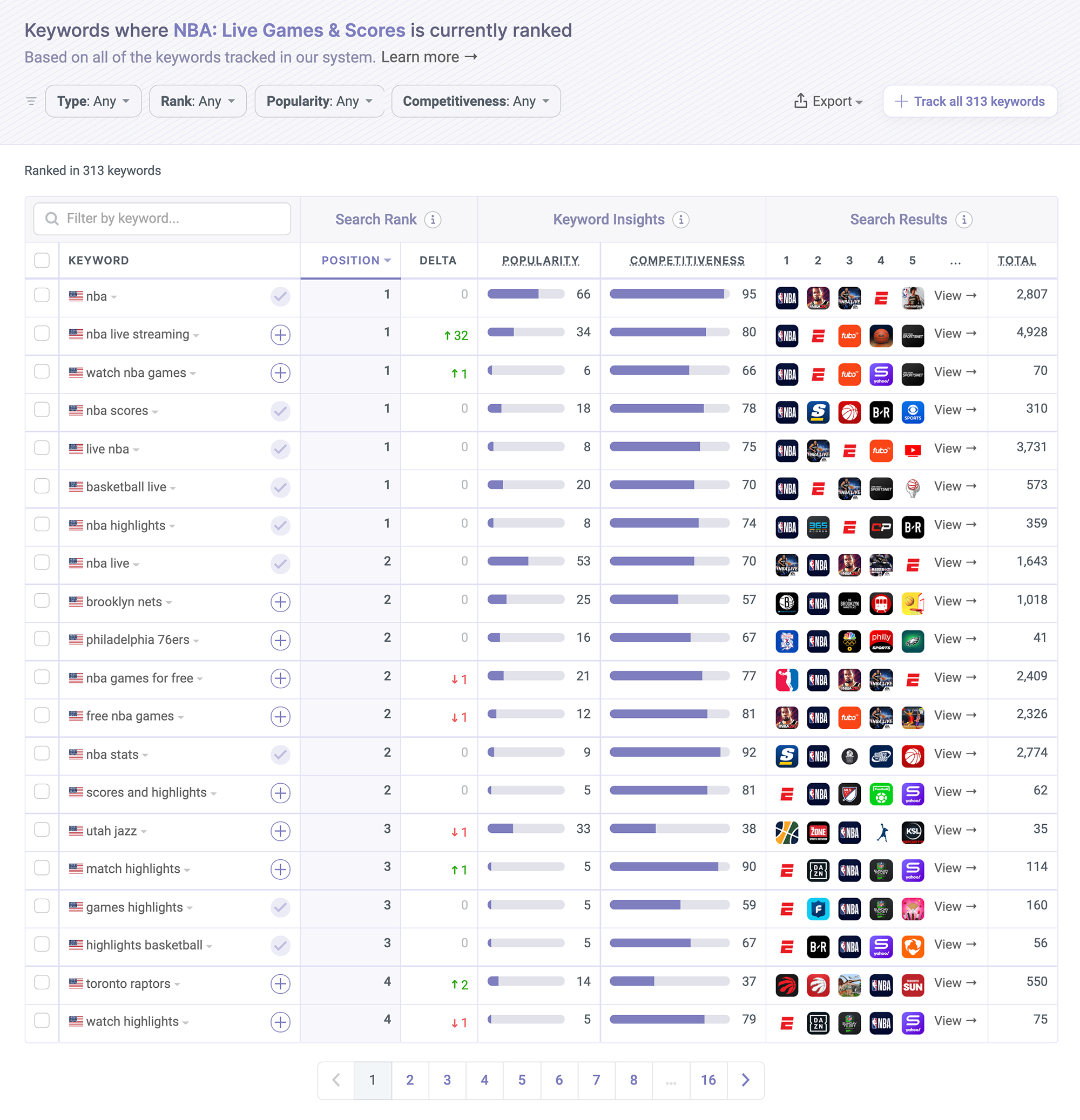 According to the Discover report, the NBA ranks in more than 300 keywords. Not all of those are great, but where it matters, the NBA has a presence. Specifically, it's ranking very well for a bunch of combinations that include the term "NBA".

That's pretty expected, but it's the sheer number of keywords that we see it in that's indicative of how well the name plays with the subtitle and the keyword list.

There are a few terms I'm surprised to see the NBA isn't ranking well in, primarily terms that involve "basketball". More on why that is below.

Moving on, let's dig in by looking at the keywords NBA is targeting in its name and subtitle. Those two send the strongest signals to the App Store's algorithm.

Talk about keywords! The name and subtitle don't have duplication between the two, which opens the door to a lot of possibilities, which the NBA capitalizes on. I like this list! 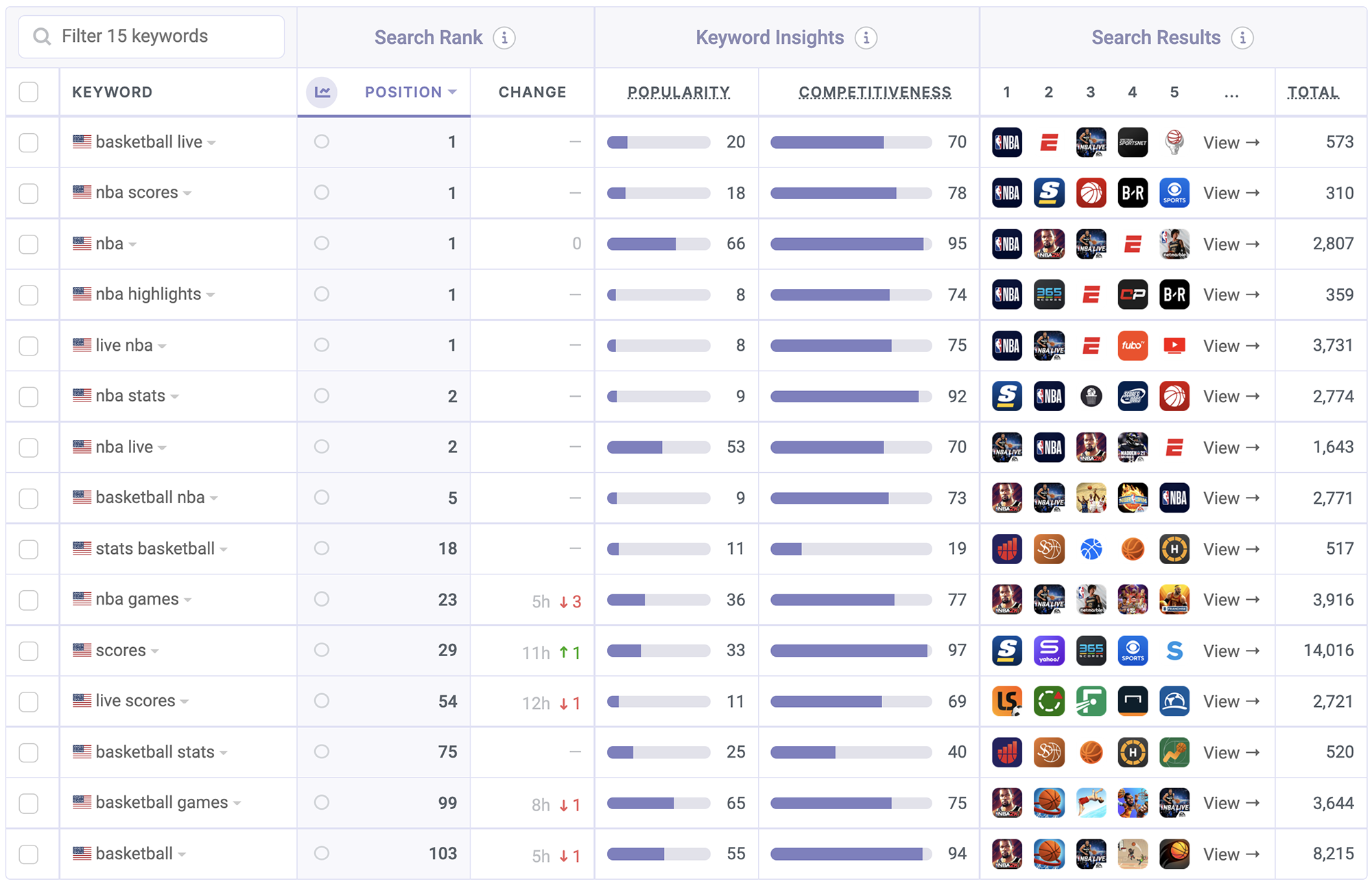 Lots of combinations != lots of popular keywords. That's to be expected.

After you eliminate the less popular keywords, you see how keywords translate into ranks, and in this case, how many of them translate to poor ranks. It may come as a surprise given how keyword-rich the name and subtitle are, but that's also the issue.

There are three reasons why these ranks aren't higher:

How can the NBA spread its ASO juju far and wide? It mentions the sports teams you can follow with its app. 100 characters (or 200 with this trick) aren't exactly enough to handle every team. But it's not an all-or-nothing game.

I'm not entirely sure why the NBA picked these specific teams, but I imagine it has something to do with activity within the app. I double-triple-checked, and the NBA's app doesn't appear in search results for the current finalists (the Bucks or Suns), leading me to believe this isn't based on right now.

The lesson here is that keywords aren't an all-or-nothing game. If you can't get everything to fit, prioritize what's most applicable.

I'm surprised there's no App Preview video for the NBA's official app. Just think how much more powerful it'd be.

But let's not dwell on that and instead switch gears to looking at static images. I mean, screenshots: 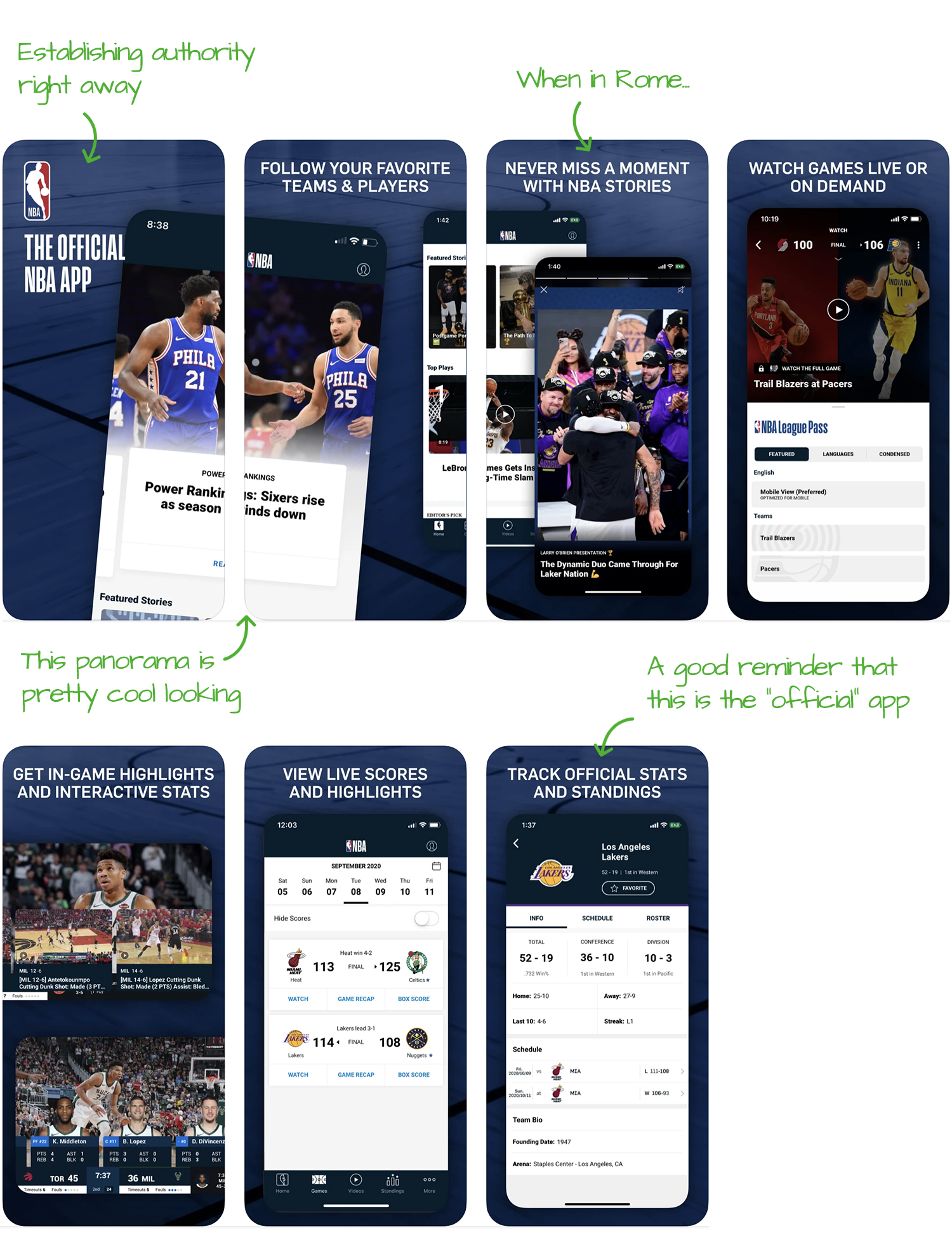 I like these! They cover all the essentials (except for the one everyone gets wrong) and also all of the best practices. There's contrast, the captions are specific and relevant, the are enough screenshots to tell the app's story, and those back-to-back panoramas are just pleasant to look at.

Overall this is a great set to learn from!

What Data is NBA Collecting?

In this new(ish) section, we look at the privacy labels apps declare on the App Store:

That's a whole lot of data to be tracking. But... Not at all surprising. Between needing information to display ads to using location to determine streaming rights, a lot of these are necessary for the NBA's business model.

This list is definitely on the longer side, which probably isn't a point of friction at the moment but could be in the future if Apple chooses to go deeper with these.

And here are all the SDKs and APIs we see powering NBA:

There's a lot to go through here, but since this is a pretty serious app, most of these are expected.

Various analytics packages, premium utilities, attribution, and engagement SDKs indicate the team that's building the app, as well as the team that's responsible for its marketing, are both very active.

The Verdict: Jumping Through Hoops!

I wouldn't necessarily call the NBA's app a seasonal app, but as you can see from the download estimates above, there's some seasonality to it. From an APp Store Optimization perspective, seasonality is a blessing and a curse. A blessing because you normally have time to prepare and a curse because mistakes during your season will have a massive impact.

The thing is, even apps with a brand as massive as the NBA need to consider organic discovery (aka ASO), especially during the season. So far, they seem to be executing pretty well.

If you remember only one thing from this Teardown, let it be the importance of focus in your app's name and subtitle. Small balance tweaks can make a world of difference, and the only way to do a good job is to try different combinations.