I've been on a search for apps that are making a "comeback" now that the sun is coming out and lockdowns are disappearing, and this in this teardown, I'll be looking at Ticketmaster, the go-to app for tickets to events. Those gatherings some of us haven't been to in so long we may have forgotten what they're like.

Why Ticketmaster? Because as demand starts to go up, so does the need for organic discovery. Or, at least that's how it should be seen. Plus, Ticketmaster is doing a pretty good job with its ASO, which means we can learn from it.

Overall, Ticketmaster earns an A

Ticketmaster by the Numbers

Here's how Ticketmaster is performing in the U.S. App Store, based on our Competitor Intelligence:

Take Me Out to the Ball Game

Ticketmaster and apps of its kind, which connect us to events, suffered greatly over the last year and a half. We can see that very clearly in downloads. 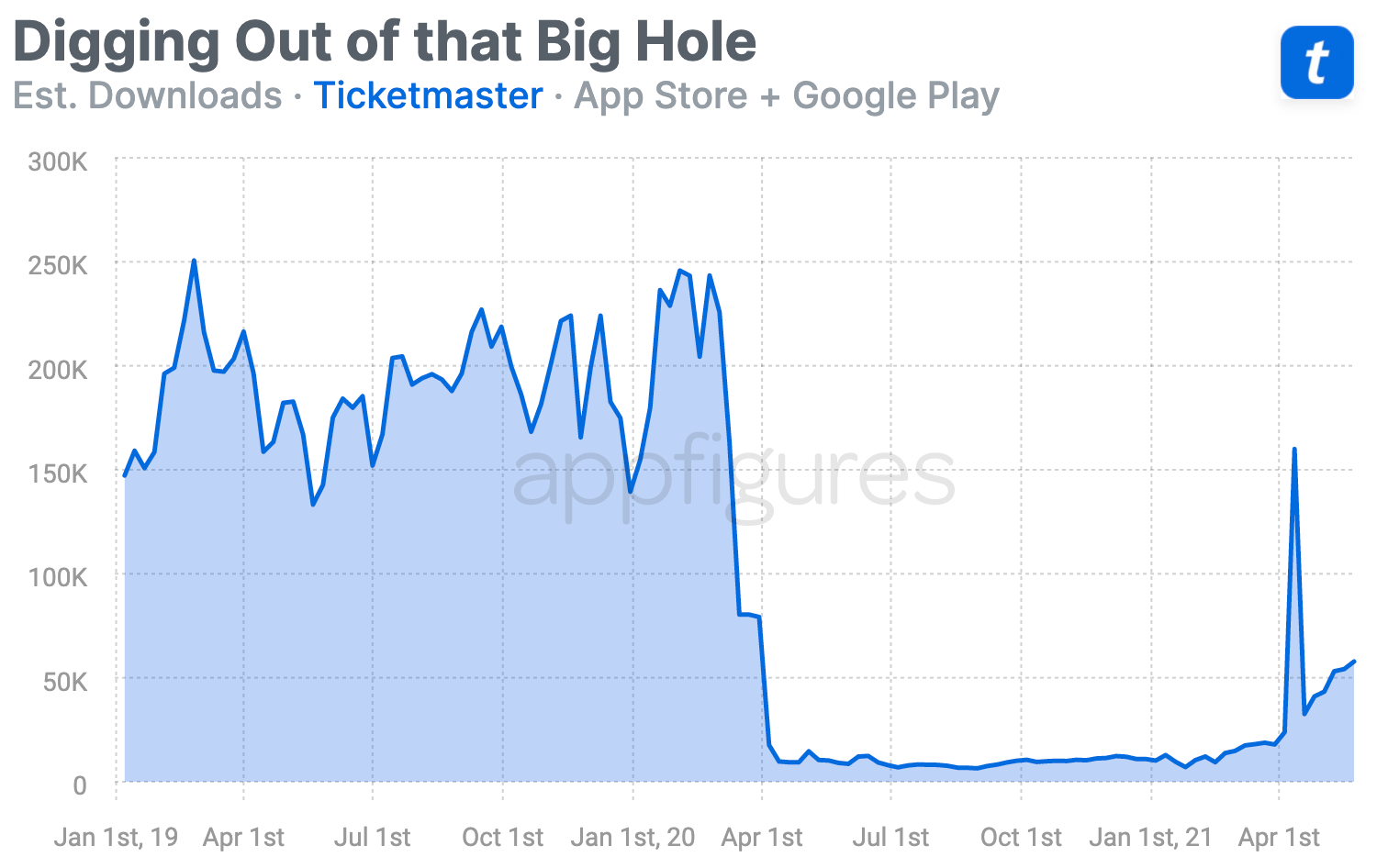 But as things start to warm up, both because summer is here and because the U.S. is in the process of opening up and returning to (a new) normal, so does the demand for apps like Ticketmaster, which we can see by the increase in downloads over the last few weeks.

Downloads have been growing steadily since February. By March, downloads doubled, and by the end of May, Ticketmaster's downloads have grown 5x from January.

Downloads haven't climbed to pre-pandemic highs, but I believe we're months (if not weeks) away from that. Which means this is agood time to focus on ASO and organic discovery!

Ticketmaster vs. the Competition

Ticketmaster is leading the pack, but it isn't the only app of its kinds. Here are the most relevant competitors, meaning those who sell tickets for different types of events, like Ticketmaster:

But being the leader now doesn't mean the top rank in every keyword. The algorithm cares about more than just downloads.

How is Ticketmaster Found?

Let's start by looking at the keywords that you're most likely to discover Ticketmaster by: 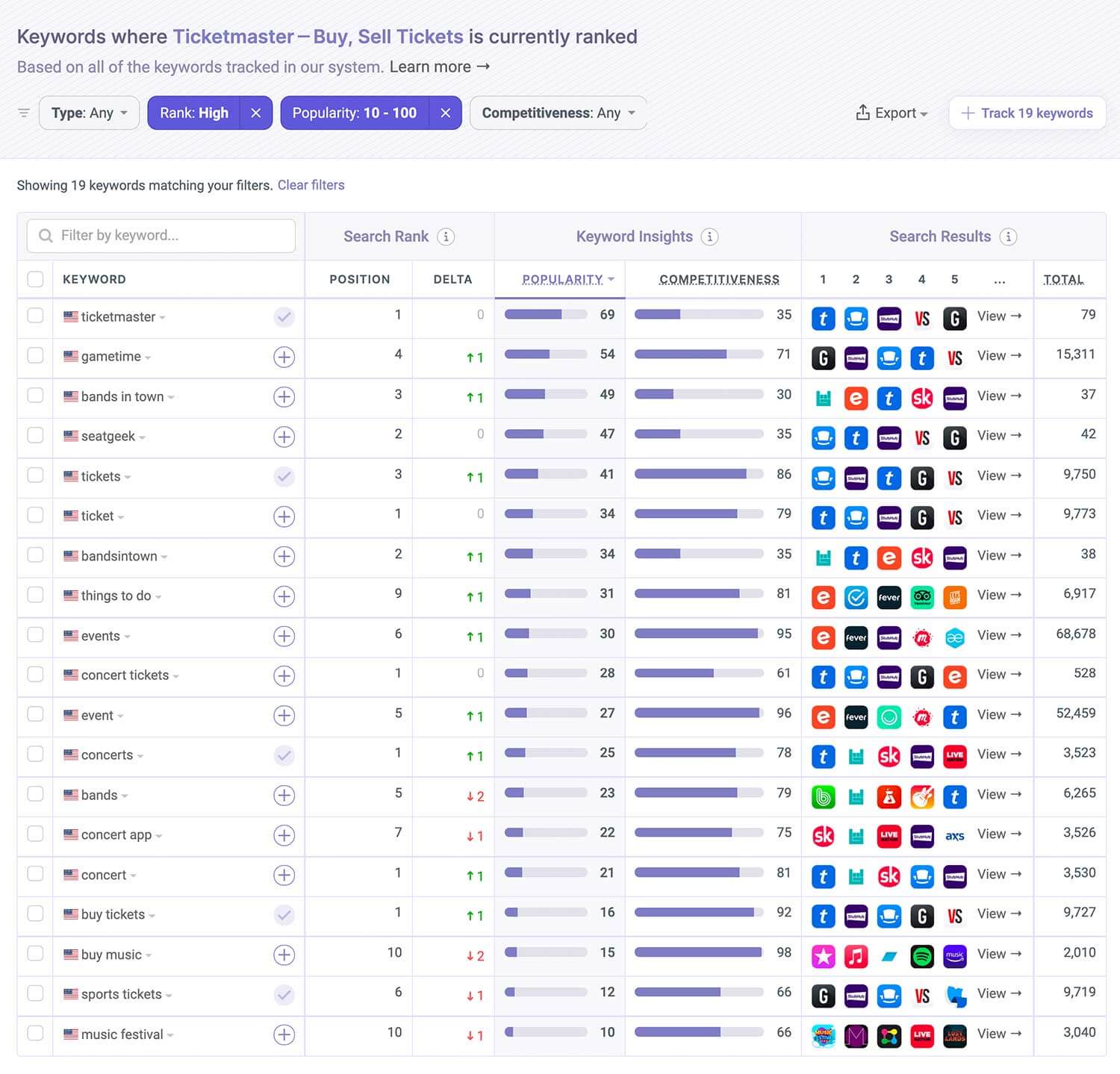 Ticketmaster ranks in nearly 300 keywords, but once we filter out the less popular and those with a low rank, we're left with just 19. Now, that isn't a terrible number considering what Ticketmaster is going after, but it's also not perfect.

Ticketmaster's challenge, as you'll see throughout this teardown, is the variety of events it supports through its app. Keep reading to see how I'd tackle this challenge.

Let's dig in by looking at the keywords Ticketmaster is targeting in its name and subtitle. Those two send the strongest signals to the App Store's algorithm.

There are some weird (read, not useful) ones in there, but it's not a terrible set to go after. Especially not after we saw that the app ranks for quite a few terms that seem to stem from these. 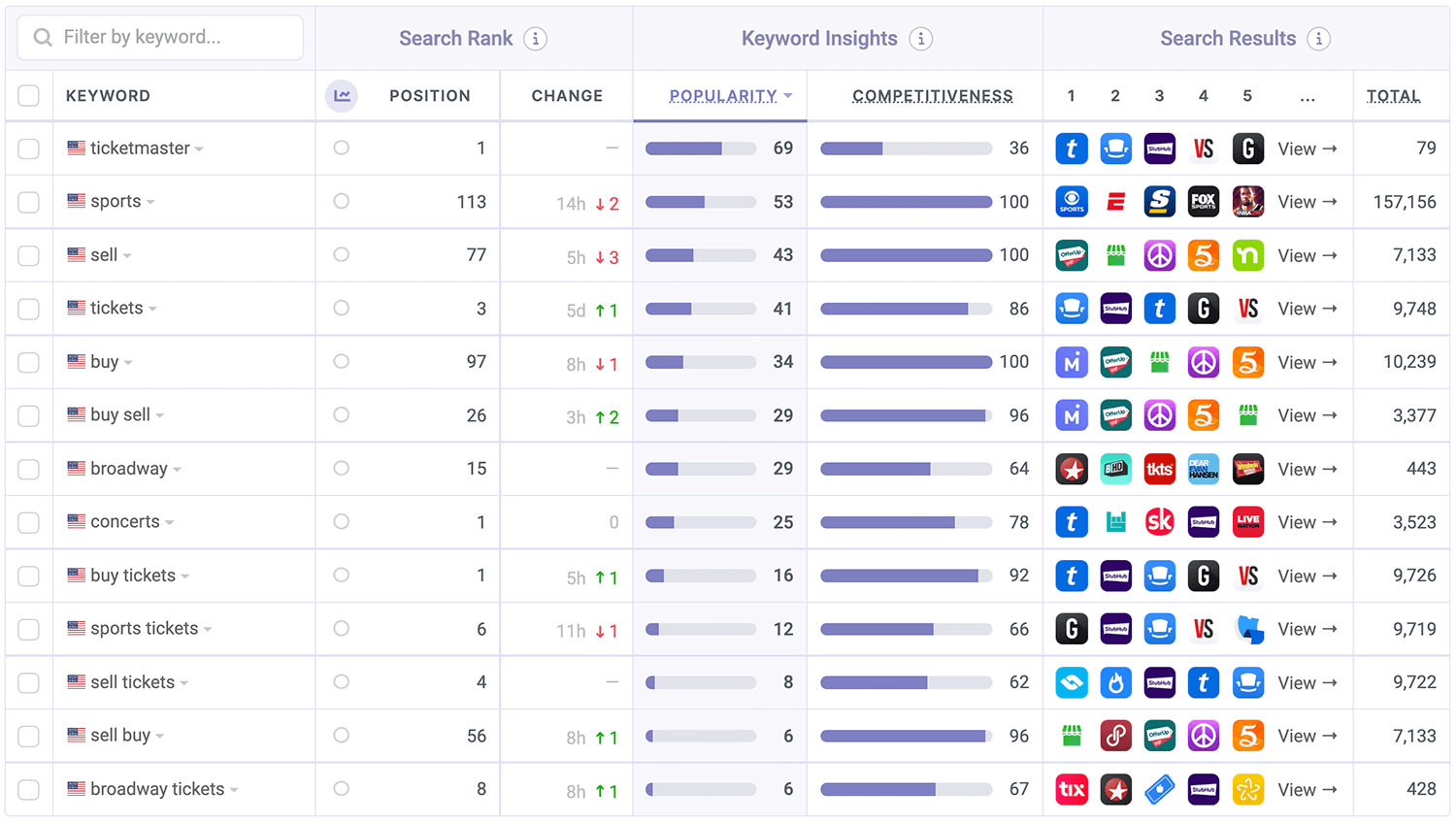 There are many different kinds of tickets you can purchase. Concerts, sports events, broadway shows, and even within each, there are more specific types (such as types of sports).

With so many options, the best strategy is usually to focus. Counterintuitive? Not so much.

We know that the name, subtitle, and keyword list all gets combined by Apple's search algorithm, and we know the keyword list is the longest allowed piece of metadata (plus, it's exapndable), so it makes perfect sense to use the app's name and subtitle to target the "generic" keywords and the keyword list for everything else.

This isn't new if you've been following my teardowns.

But that's not all you can do.

Events tend to come in waves, especially the important ones, and they don't always come together. Sports have seasons, and finals rarely collide. See where I'm going here?

Another strategy Ticketmaster can use is to change its name and (more likely, or) subtitle to focus on a specific type of event as it's happening. Imagine an event like the NBA playoffs, baseball postseason, etc.

Seasonal ASO is great for a variety of apps, from tickets to games that can be themed for events.

FYI - Ian from the BBC had a few great tips of seasonal ASO, which you can find in our AF Chat from April

That's a very solid list, and captures a bunch of different sets of keywords that are relevant and applicable:

And lastly, possibly an experiment, "finder", which could also be a relic from an experiment with the subtitle. In my experience, "finder" is a great keyword to have for any app that actually helps with finding things. That's a bonus tip.

👉 How to Optimize Your Keywords List in App Store Connect

Video? What video? Oh, the one Ticketmaster has!

That's right. This is the 3rd app I'm analyzing in this season (4, can you believe it?) of App Teardowns that has an App Preview. I promise you, I don't pick them by whether they have a video or not.

Ticketmaster's App Preview is a great example of simplicity. The video takes you through a quick tour of how you'd use the app to get tickets, from finding them to checkout. It does that with actual app UI, captions, and title cards.

These kinds of App Previews take away the friction that may be caused by users thinking the app might be too complicated to use based on their initial perception from reading the name and glancing at the screenshot.

It doesn't mean the app is, but perception is not reality in this case, and you want to remove that friction. 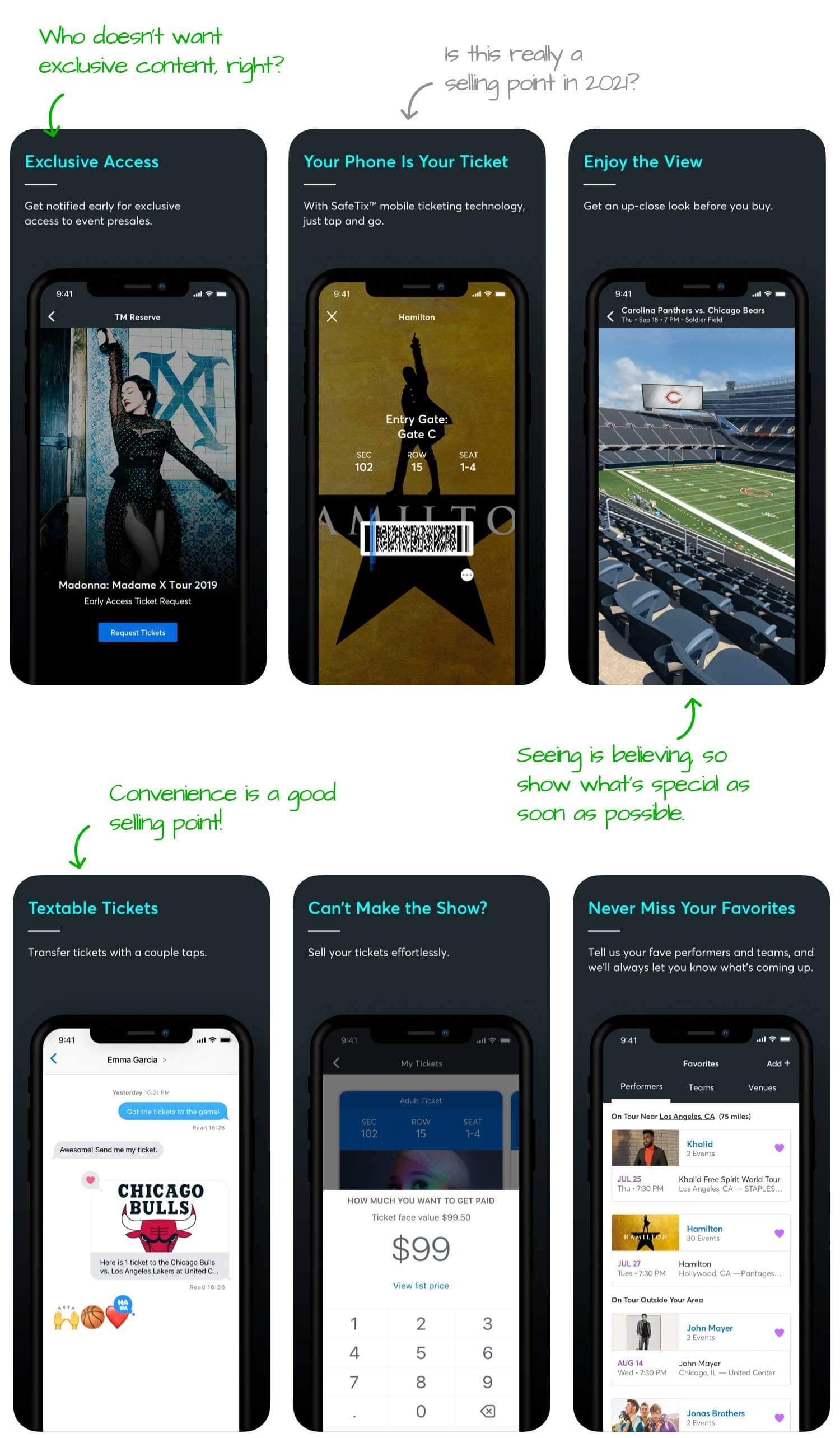 What Data is Ticketmaster Collecting?

In this new(ish) section, we look at the privacy labels apps declare on the App Store. Ticketmaster is definitely collecting, but considering it's a free app, it's not too bad.

Data not Linked to You:

That's not a short list, but considering this app takes money and is used to verify tickets, some of which aren't cheap, I don't see anything obviously odd here.

App Store Tip: You can get a bit more details about what actual items each of these groups refers to by tapping the privacy labels box in the app's App Store page. You can also see them in Appfigures Explorer.

Here are all the SDKs and APIs we see powering Ticketmaster:

At a quick glance, I see a few things:

The Verdict: Batter Up

Much like the last teardown (Turo), the industry Ticketmaster is in is starting to see a serious comeback. Although there was a lot of demand for ticketing apps before the lockdowns, as "normal" resumes, we expect mobile ticketing to grow even higher than before.

That should spell opportunity for Ticketmaster, who's leading in downloads. But, it also means competitors are seeing this opportunity as well, and we already know you can rank well without having more downloads, so Ticketmaster's position isn't guaranteed.

That's why ASO is a rewarding but ongoing process.

You Can Do It, Too