What's one popular app you can blindly expect to top the download charts without hesitation? If you said Facebook, you'd be right. The app has been in the top 10 most downloaded apps in the US and many other countries for so long that you'd think it's superglued to that list somehow.

I thought our Top App lists were broken for a moment. They weren't. Facebook has dropped significantly over the last few days. 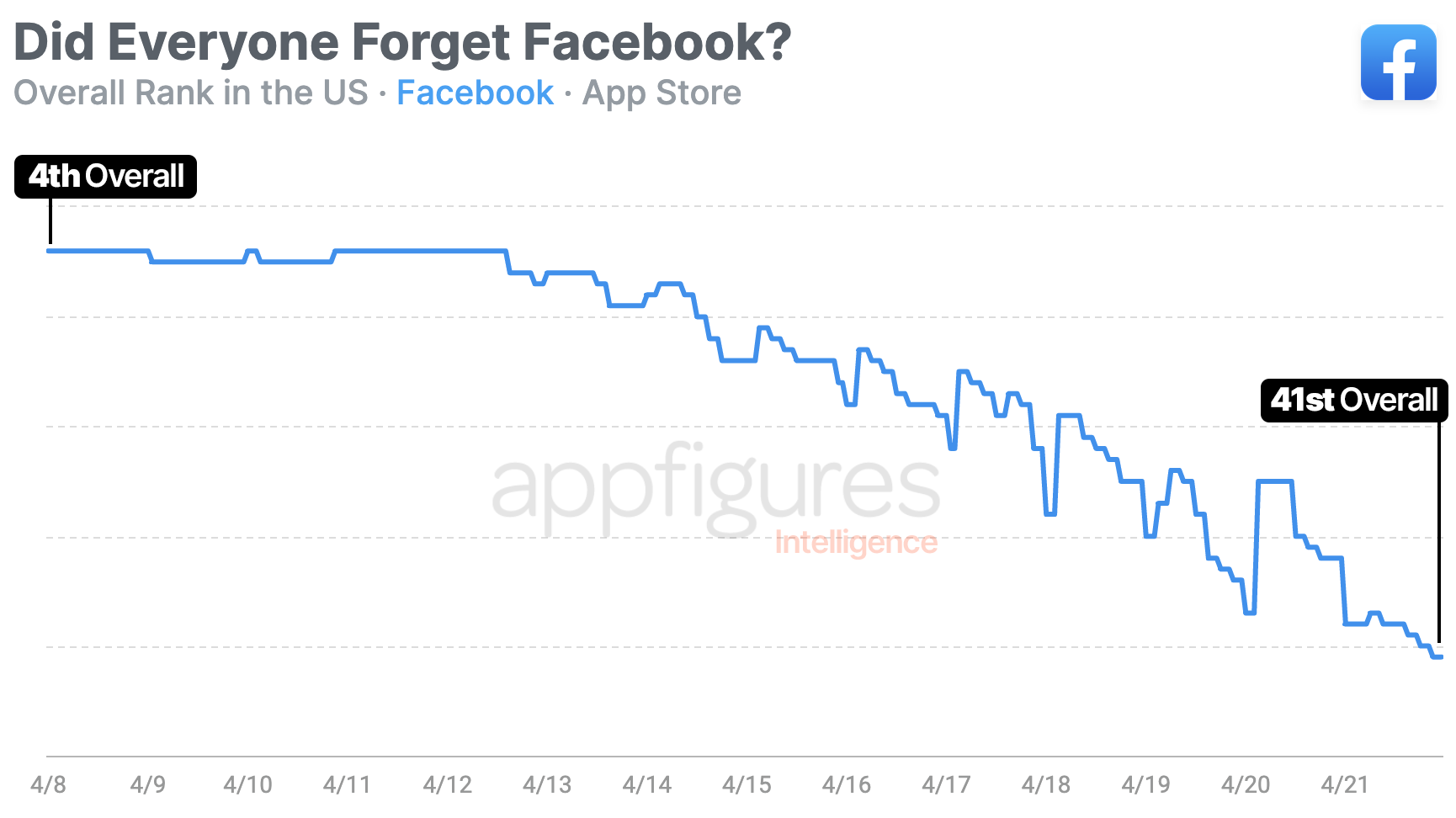 Our hourly category rank tracking is showing that in the US, the slide started last Tuesday. Facebook ranked 4th overall on Tuesday in the US App Store, the list that ranks both apps and games. By Wednesday, Facebook dropped to 9th place, and by Thursday, it had already left the top 10, sliding into 14th place.

It didn't stay there very long...

Fast forward to yesterday (Thursday) and Facebook's rank has dropped so much it is now sitting at #41 overall. 41!!!

What does that mean for downloads? If this is really a drop in demand and not a change in how the App Store ranks apps, our estimates show that the initial drop, last week, lost Facebook more than 60% of daily downloads in the App Store globally. In more absolute terms, we're estimating the drop to be more than 200,000 downloads a day.

That doesn't seem to be the case on Google Play, which could mean this is the App Store. Let's see if it rebounds.

2. Netflix's Subscriber Loss Isn't a Real Surprise (If You Look at This)

This week Netflix disclosed that it lost subscribers in Q1 of 2022, the first time that's happened in more than a decade! Netflix lost 200,000 subscribers instead of adding 2.5 million new subscribers, which is what was expected.

Needless to say, the market was surprised, and that surprise cost Netflix's stock, which dropped 35%, losing the company nearly $50 billion of market cap.

But... To those who have been looking at downloads, this was pretty obvious for a while now. 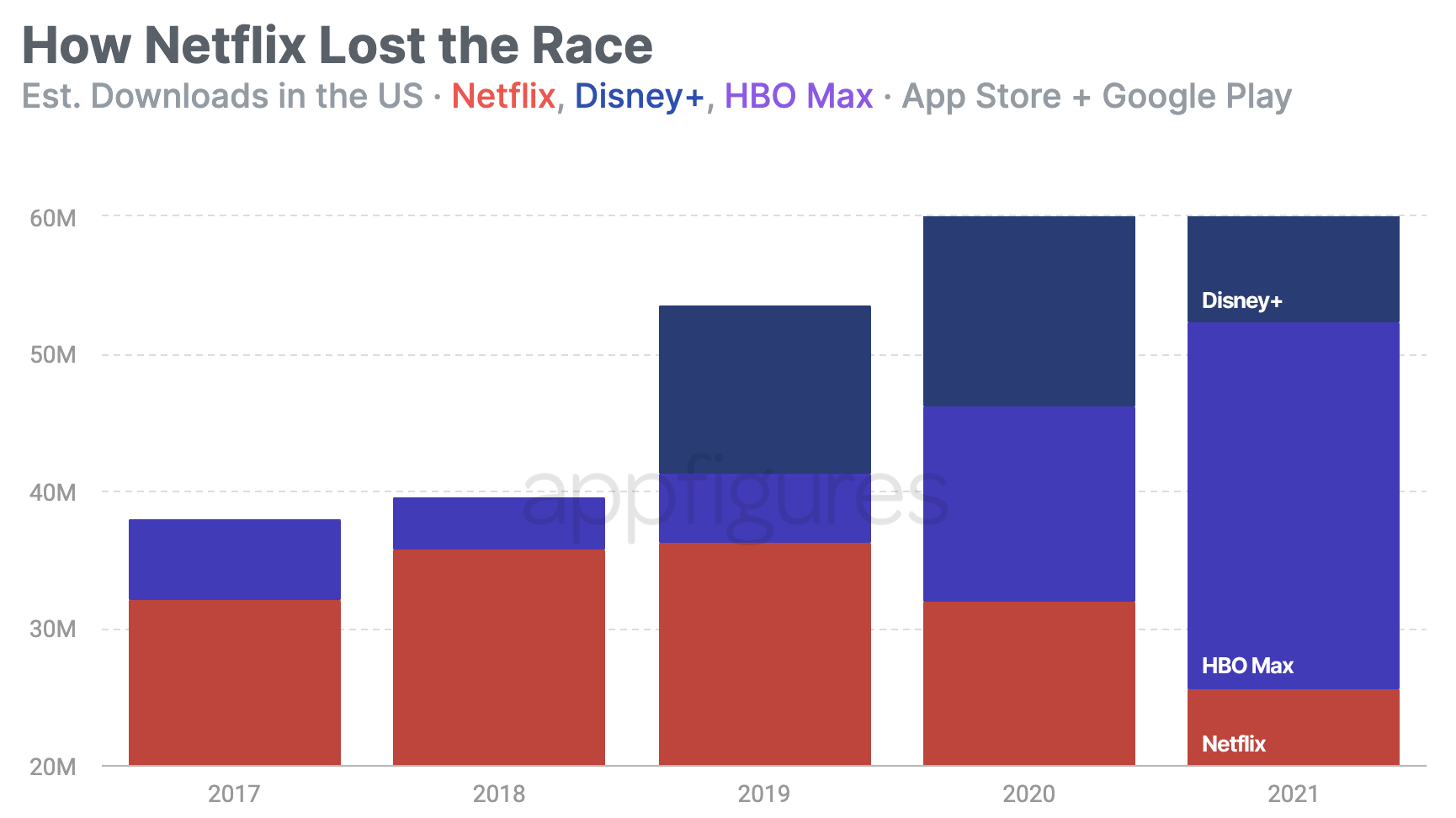 Back in the day, before streaming was big on mobile, before the days of Disney+ and back when HBO Max was still HBO Now, Netflix was the streamer to downloads.

Sure, you can stream Netflix in a variety of ways that aren't a mobile phone, but mobile has become a very big channel for streaming, so it can't be discounted. Even not back in those days.

Then came HBO Max, a rebrand that launched with great titles and beat both Netflix and Disney+ in the US. By that point, Netflix's downloads were down 22% year over year, down to 25 million for the year.

What's going on? Disney+ and HBO Max realized something early on, which gave them the lead very quickly. The streaming race is really all about content. Netflix has been investing in content, but overall, I think what's coming from the bigger studios simply attracted more attention. The kind that getting into games didn't solve.

CNN made a somewhat similar mistake with CNN+, but Netflix is in a much different position. Can it become relevant again?

One little thing I noticed this week is that Tesla hit a new milestone.

Although most news coverage these days revolves around Elon Musk's attempt to take over Twitter, the Tesla app, which I've been using as a loose proxy for demand for Tesla cars, has hit its best month of downloads ever!

After a slow start to 2022, March ended with 279,000 estimated downloads worldwide across the App Store and Google Play, but most came from the App Store. That's a lot of new (or used, see below) Teslas! I say that because the primary use case for the app is to operate a vehicle.

The previous high was last November, where the app added 268,000 new users, according to our estimates.

Year over year, downloads are up 78%.

By the way, some of you have pointed out the difference between the numbers I shared in my last post about Tesla and the official number of new cars shipped according to Tesla. Just keep in mind that Teslas change hands, and new owners of used Teslas aren't counted in any of the official numbers but are represented by their downloads.

4. The French Photo-Sharing App That's Taking Over the App Store

Ready for something new? BeReal is a photo-sharing app with a unique spin – it asks you to snap a photo of yourself at a random time and gives you two minutes to do it. That's it. That's the whole thing.

Who would do that, right??

Well, up until recently, not that many. Recently, many! 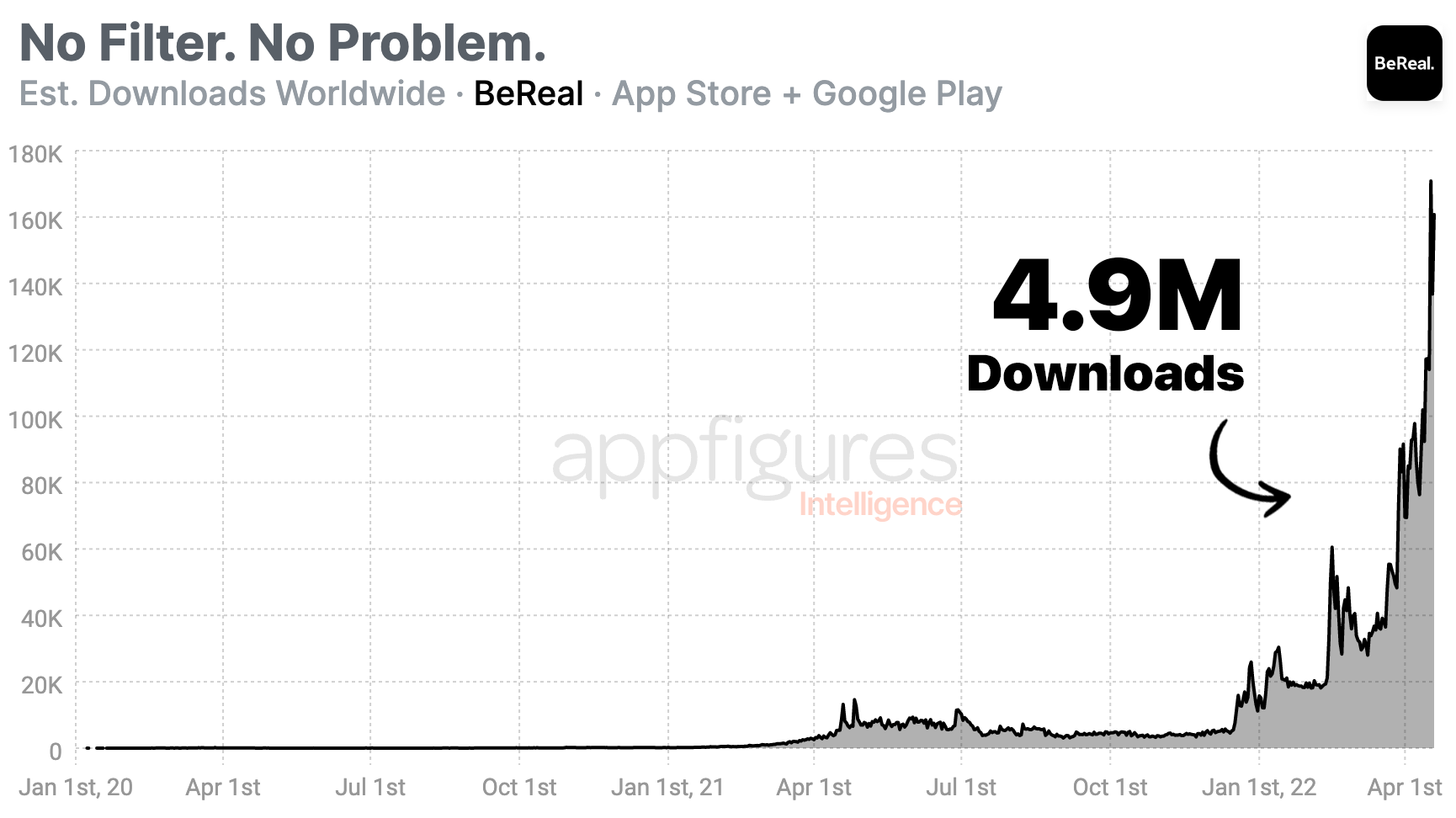 The two-year-old app, which hails from France, has been picking up steam in the last month and has hit a new peak this week.

Daily downloads, which our estimated show averaged around 4,000 for most of 2021, have been growing steadily in 2022. In January, daily downloads more than quadrupled to 20,000, and by March, downloads doubled to around 40,000, according to our estimates.

But that's not the end! Last Sunday, downloads climbed to 170,000. That's right, more than 400% increase, all in a single day. And it doesn't look like that's slowing down.

BeReal is now the 11th most downloaded app in the US App Store.

Like many of the apps du jour we've seen topping the App Store recently, most of BeReal's downloads came in recently. Of the 6.7 million downloads the app has seen since it launched in 2020, 4.9 million of downloads, or roughly 73%, came in 2022. Most of which are from the US and the UK.

College students are the app's main audience, where the app has been spreading organically, but there's more here. Photo apps have been rising to the top of the charts a bunch over the last few months. Some knowingly, others by luck, but at the end of the day, there's an obvious pattern here.

Remember the excitement in the early days of Snapchat? That could be coming back, without the filters and gimmicks.

5. Renewed Demand for SHEIN Results In an All-New High

Shopping thrifty? After a surprising end to 2021, fast-fashion shopping app SHEIN has hit a new milestone.

SHEIN, the clothing app that rose in popularity over lockdown season and even beat Amazon for a hot minute, is back! It didn't really go anywhere, but downloads did dip a lot in 2022. Well, that's all done. 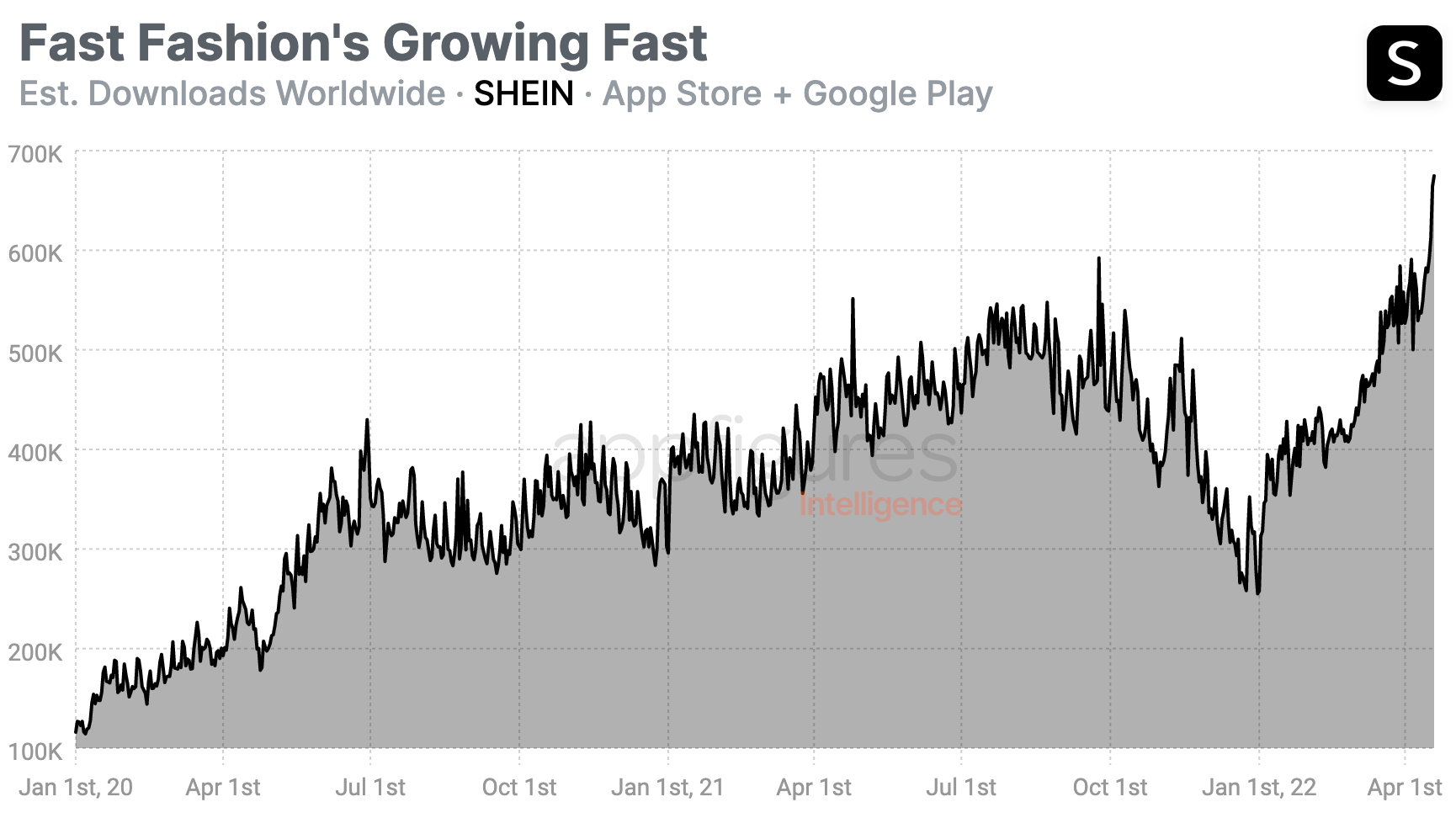 SHEIN has had an interesting ride since the pandemic started. It opened 2020 with a little over 100,000 downloads a day. A nice number that would triple by the end of the year.

2021 was a bit rougher, and even though it saw a 50% increase in downloads, the trend was sloping in the wrong direction for the shopping app. It ended 2021 with just 257,000 daily downloads.

But then, this Tuesday, global downloads across both platforms grew to 675,000, according to our estimates. And it's not a single spike. Downloads have been rising slowly since the beginning of the year.

Right now, SHEIN is getting more downloads than shopping king Amazon in the US. How long will it stick this time?